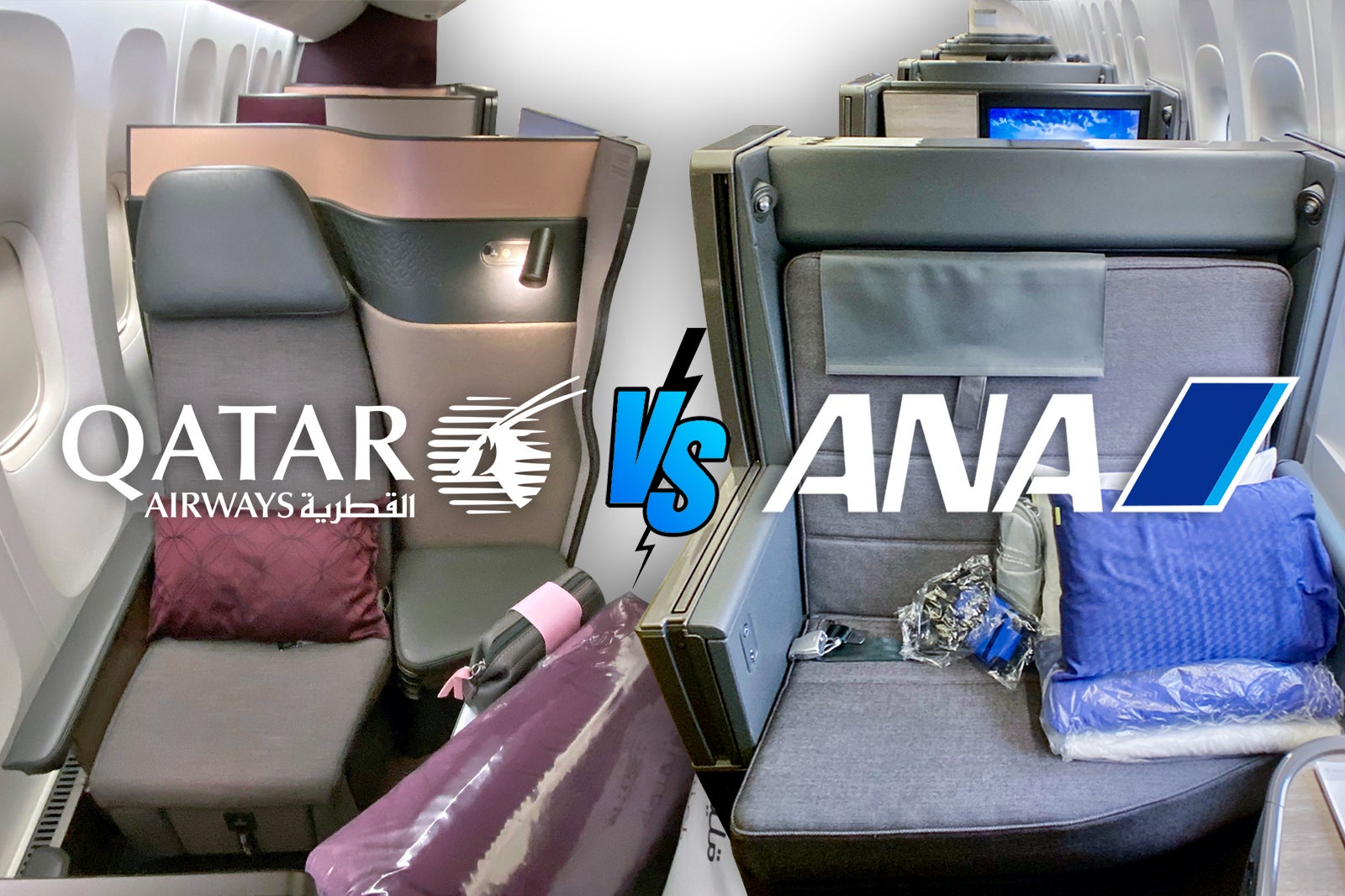 There's a new competitor for the title of world's best business class.

For the past two years, Qatar's Qsuite hasn't had much competition. But late last year, ANA quietly launched its newest offering, dubbed The Room, that looked like it could give Qatar a run for its money. And that it did.

When reviewing The Room, I called it "the new gold standard." In this post, I want to take a deeper look at that claim. Is The Room really the world's best business-class product?

The first thing everyone probably wants to know is how they can sit up front. Well, the good news is that you can use miles to get free tickets on both carriers. However, there's a clear winner here, and it's Qatar.

For one, Qsuite is available to many more destinations on select Boeing 777-200LRs, 777-300ERs, Airbus A350-900s and all of the A350-1000s. In fact, all U.S. routes will feature Qsuite as of August 1st (assuming the planned schedule sticks). Relative to ANA, which currently has just six Boeing 777-300ERs outfitted with The Room, your chances of flying in the flagship product are much higher with Qatar than ANA. At the moment, ANA's only flying The Room to Frankfurt (FRA), London (LHR) and New York (JFK).

Furthermore, award availability with Qatar is much better than with ANA. For a while, ANA didn't release any award space for seats in The Room. That's since changed, as I've seen some seats released close to departure. You'll have better luck finding availability on flights to Tokyo than from it.

With many more planes featuring Qsuite and a good amount of award availability, Qatar takes the cake here.

It's nearly impossible to compare the overall ground experience between the two airlines. So much can change based on when and where you depart. For instance, leaving JFK, Qsuite passengers have access to American's Flagship Lounge, whereas The Room passengers can relax in the British Airways Club Lounge before their flight. From NYC, I'd say it's a toss-up between which is better, though I'd probably prefer the Flagship Lounge.

If we compare the experience from the carrier's respective hubs, the Doha lounge definitely beats ANA. Though the Al Mourjan business lounge can get crowded at times, I find the space and food and beverage options to be more substantial than what ANA offers in its business lounges. I do love the noodle bar (and the fresh sushi) in the ANA lounge, but overall, I prefer the Doha space.

Plus, when it comes time to departure, ANA's first class and Diamond members board before business class, which means that you won't be first on the plane. On Qatar, you need not worry since you'll be first onboard.

Once onboard, the story really changes. As you'll glean from the name, The Room is unrivaled when it comes to the amount of space dedicated to each seat. While the Qsuite cabin sports better design finishes, biz is all about the hard product. And that's where The Room excels.

The seat itself is much larger than Qatar's. Though the sitting surface isn't that much larger when upright, you've got much more space when the seat's reclined. At maximum, The Room has 38 inches of width and Qsuite has 20. I was traveling on ANA with my girlfriend, and we both comfortably fit next to each other in one Room with the seat reclined. You simply couldn't even attempt that on Qatar.

In terms of configuration, both staggered products alternate between forward- and rear-facing. Qsuite offers a "quad" seating arrangement unique to the carrier. While novel, that's certainly not reason enough to prefer Qsuite to The Room.

When it comes time to sleep, the bed in Qsuite measures 74 inches, whereas The Room measures 71 inches. The three-inch difference is definitely noticeable, but you can always sleep at an angle in The Room, making for a much, more comfortable night of rest thanks to the large, mostly unobstructed footwell.

The one area where The Room falls short is in terms of storage space. On ANA, there's basically no enclosed storage, but there's a good amount more in Qsuite.

To me, the single most important amenity on a long-haul flight is Wi-Fi. In my experience on both carriers, the internet speed and reliability has been similar. On the JFK route, Qatar charges a bit less than ANA ($10 vs. $21.95), but the ANA performance was just a tad better.

Like Wi-Fi, the IFE is a toss-up. With a 24-inch 4K monitor and the ability to connect your own laptop using HDMI, ANA definitely has better hardware. However, the Western entertainment selection leaves a lot to be desired. On Qatar, the screen may not be as high-resolution, but at least you won't get bored with the preloaded movies and TVs.

ANA wins for the AvGeeks, though. It's got a highly customizable moving map and a super-HD outside camera.

Both carriers offer pajamas and an amenity kit stocked with the usual goodies. They both give two pillows, a duvet and mattress cover.

This one's easy. If you're willing to be adventurous, you'll love ANA's Japanese meals. For Western food, however, Qatar wins.

ANA serves a prolonged first meal service, followed by a second pre-arrival meal on its long-haul flights. You choose between a Japanese or Western menu and then get a bunch of small plates and tastes according to your preferred cuisine. The Japanese meals are superb and a real treat.

On Qatar, there's a dine-on-demand menu that features plenty of Western options. The airline's known to run out of certain items, but if you reserve your choices at the beginning of the flight, you should be set. Plus, everything I've tried on this airline has been very good.

And both carriers offer an extensive mid-flight snack choice. In terms of drinks, Qatar serves higher-quality spirits, but ANA's got sake. So, this too will come down to a personal preference.

Mine? ANA for the Japanese meal.

Like ground experience, this can be hit-or-miss depending on your flight. However, there are certain differences in the service culture and structure between the two airlines.

On ANA, my biggest takeaway was how slow the meal service was. The flight attendants were hustling, but serving 64 passengers at the same time takes a while. Some people may prefer a longer, drawn-out meal, but I'm not one of them.

Qatar's dining concept is dine-on-demand, so you don't typically have as many passengers eating at once. This means that flight attendants are generally more attentive throughout the flight, especially during the meal service. Also, Qatar offers turndown service, a nice feature for those who appreciate that.

Throughout my many flights with ANA, I've found their flight attendants to be friendlier and more personable than those on Qatar. Plus, in my experience, they've been more responsive to the call button too. Again, this isn't representative of the entire staff, but I still slightly prefer ANA's crew.

The Room, but not by much.

ANA and Qatar are both world-class airlines offering top-notch business-class products. The Room's got a lot going for it. Most importantly, it's hands down the best biz seat in the sky. The amount of personal space you get is unrivaled. Coupled with fantastic catering, a 4K screen and plenty of amenities, you're in for a great flight.

Qatar's Qsuite is likewise fantastic. For one, it's much more accessible than The Room, plus the ground experience is, on average, better than ANA's. The seat itself is comfortable, though much smaller than The Room. The dine-on-demand concept is novel, especially for biz, but you'll often find that Qatar runs out of your top food choice.

Count yourself lucky if you end up flying either product. But if you're looking for the world's best, then choose The Room.