Articles
Alberto Riva Alberto runs our flight reviews and oversees special projects across several verticals. Previously, he was the managing editor of Vice News and worked at Bloomberg and CNN, where he was constantly trying to convince people to do more stories about airplanes. He speaks Italian, French and Spanish and one day he’ll be better at German.
Follow
May 03, 2020
•
8 min read 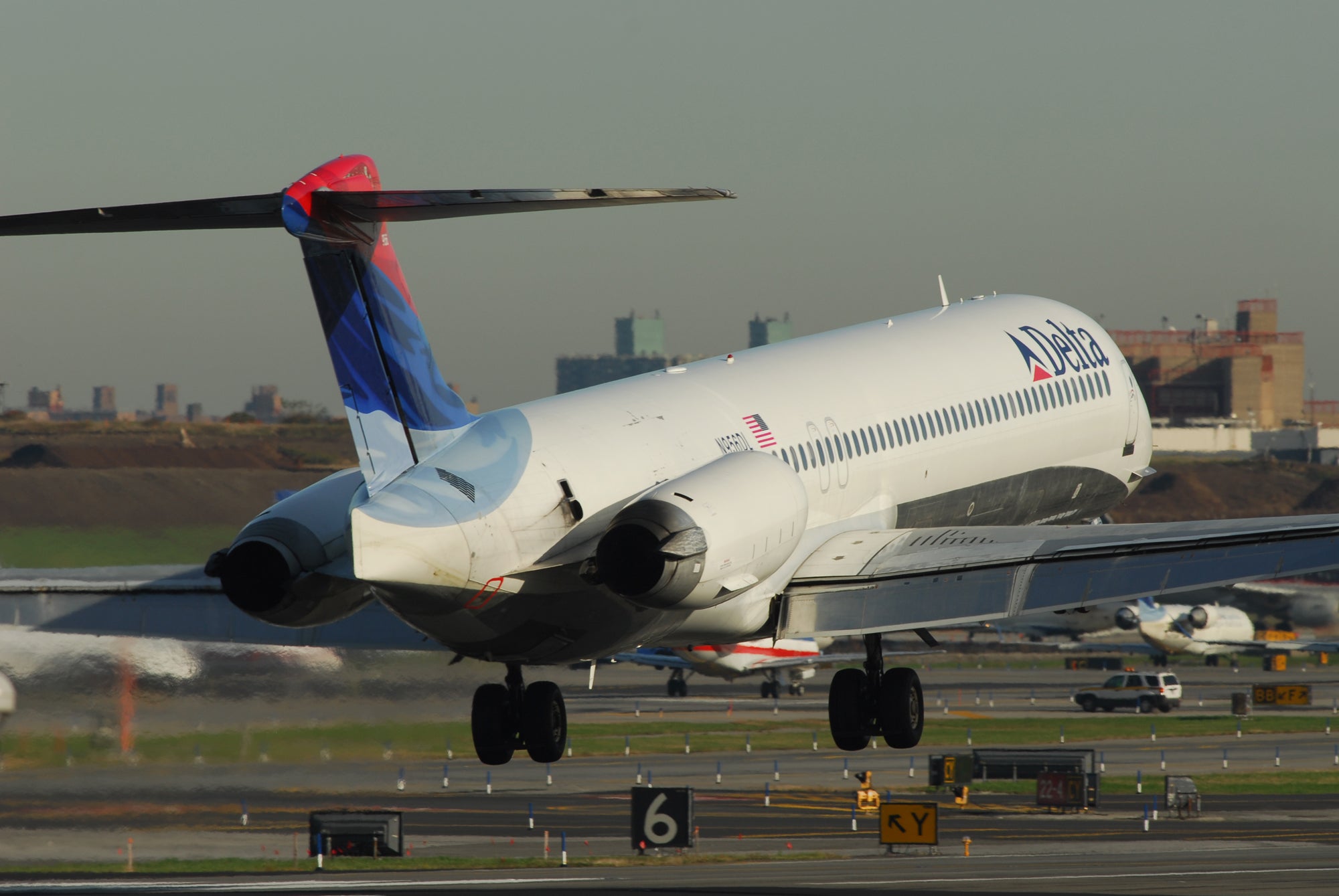 Goodbye, old Mad Dog: A photo tribute to the noisiest jets in Delta's fleet
This post contains references to products from one or more of our advertisers. We may receive compensation when you click on links to those products. Terms apply to the offers listed on this page. For an explanation of our Advertising Policy, visit this page.

It was going to be an epic occasion for aviation enthusiasts, one of those big retirement ceremonies that airlines had been doing lately — before the pandemic — to mark the exit of an airplane type from the fleet. An official last passenger flight, a heartfelt sendoff from crews and executives, then a flight out to the jet's last resting place in the desert.

And this one would be have been especially important — the ceasing of scheduled operations of the last McDonnell Douglas MD-80 and MD-90 with a U.S. airline. It would have been the end of the storied McDonnell Douglas name in the United States' airline system.

But none of that will happen, courtesy of the coronavirus.

The retirement of the last McDonnell Douglas jets from the Delta Air Lines fleet was scheduled to happen in 2022: first the MD-88 later this year, then the more modern MD-90 after it. Instead, the airline just announced that it's happening quietly in June. Both types will be parked forever, with no fanfare. This is not the time to throw an aviation-geek party. Airlines are focused on making it out of this crisis alive, not on fancy goodbyes to gas-guzzling jets built decades ago. And in any case, they don't have the money to spare.

Fanfare or not, though, the airplanes known as Mad Dogs — an affectionate play on their model initials — have a place in the heart of many aviation lovers. Just witness the outpouring of sympathy from the Avgeek community when American Airlines retired its own MD-80 models last year, making a big deal out of it. We at TPG were not immune from the emotion of seeing a historic plane go away, although the passenger experience on those old birds was admittedly far from the best. We even sent a reporter to the remote desert airfield where American's Mad Dogs would live out their days until the time they'd get recycled for aluminum.

We're not doing that now. The last time on a Delta MD-80 for me will have been in October 2018, on a flight from Atlanta to Jackson, Mississippi. I was so thrilled to be on a Mad Dog that I tweeted about it. Little did I know: that flight to go see a friend would also turn out to be the last time with another friend of a different sort.

I've spent countless hours on Delta's MD-88s and MD-90s. Over the years, I've photographed them all over. (They came in several versions: From MD-81 to MD-88, known collectively as the MD-80 series, plus the MD-90 with newer engines.)

They just looked so good: elegant, graceful machines with a long, thin fuselage and engines at the back like a jet fighter. That engine placement, by the way, may have been great for photographers and first-class passengers seated at the front, away from the noise. But it was terrible for the back of coach class, subjected to an awful racket.

One of my favorite images is this one taken at New York's La Guardia airport, of an MD-88 still in Delta's old colors. It illustrates the airplane's sleek beauty.

They were louder than anything else in Delta's, or any other U.S. major's fleet. Waiting at the airport, you didn't even have to look to know when one was taking off, because it would make the terminal's thick windows vibrate. But if you did, you would often see an impressively spirited takeoff; Mad Dogs were known for their climbing performance.

That noise is why Delta decided to stop flying its MD-88s into New York's La Guardia in 2017. Their takeoffs, with Pratt & Whitney JT8D engines straight out of the 1960s, were the bane of Queens neighborhoods near the airport. But their landings on LGA's runway 31, with the Empire State and Chrysler buildings in the background, were a sight to behold.

They looked fantastic even on bad-weather days, when they would come out of the low clouds over Brooklyn on final approach, distinguished by their unique howl.

Among other memories, I owe a Delta MD-88 a record: my shortest airline flight ever. On a summer weekend jaunt to Miami, the plane carrying my wife and me encountered thunderstorms that had us circling off the coast of Florida for a long time as Miami closed down. Finally, low on fuel, our captain decided to divert to West Palm Beach. A couple hours later Miami reopened, and off we went, on a 60-mile hop down the Atlantic coast with the sun setting dramatically to our right. It was so short we never climbed past a few thousand feet.

Another time in Miami, I caught an MD-88 face to face with one of the planes that took its place, the Boeing 737-800. It was similar in size but with a wider fuselage accommodating a 3-3 seat layout in coach, instead of 3-2 on the Mad Dogs. It could fly 20% more people than the MD-88, using 20% less fuel. So the 737 wins in efficiency, but as far as looks? Come on. There's no contest.

Years after that, during a stay at the Atlanta airport's Marriott Renaissance hotel, I caught a shot I had long been after: a Delta MD-88 and MD-90 together. The 90, above, sports bigger, quieter engines. But other than that, on the outside they are the same airplane, both clearly heirs to a legendary design: the Douglas DC-9.

I remember something a captain with Alitalia — once the biggest operator of the type outside the United States — wrote about his airline's MDs. They were, he said, "the last of the romantic airplanes" — a reference to their dials-and-gauges cockpits and lack of computer systems aiding pilots. Even their little "eyebrow" windows above the flight deck were a throwback to a bygone era: they were useful for navigating by the stars in a pinch, way before GPS came.

Delta's faithful old Mad Dogs may be going to the desert alone and unheralded. But their noisy, old-school charm won't be forgotten.