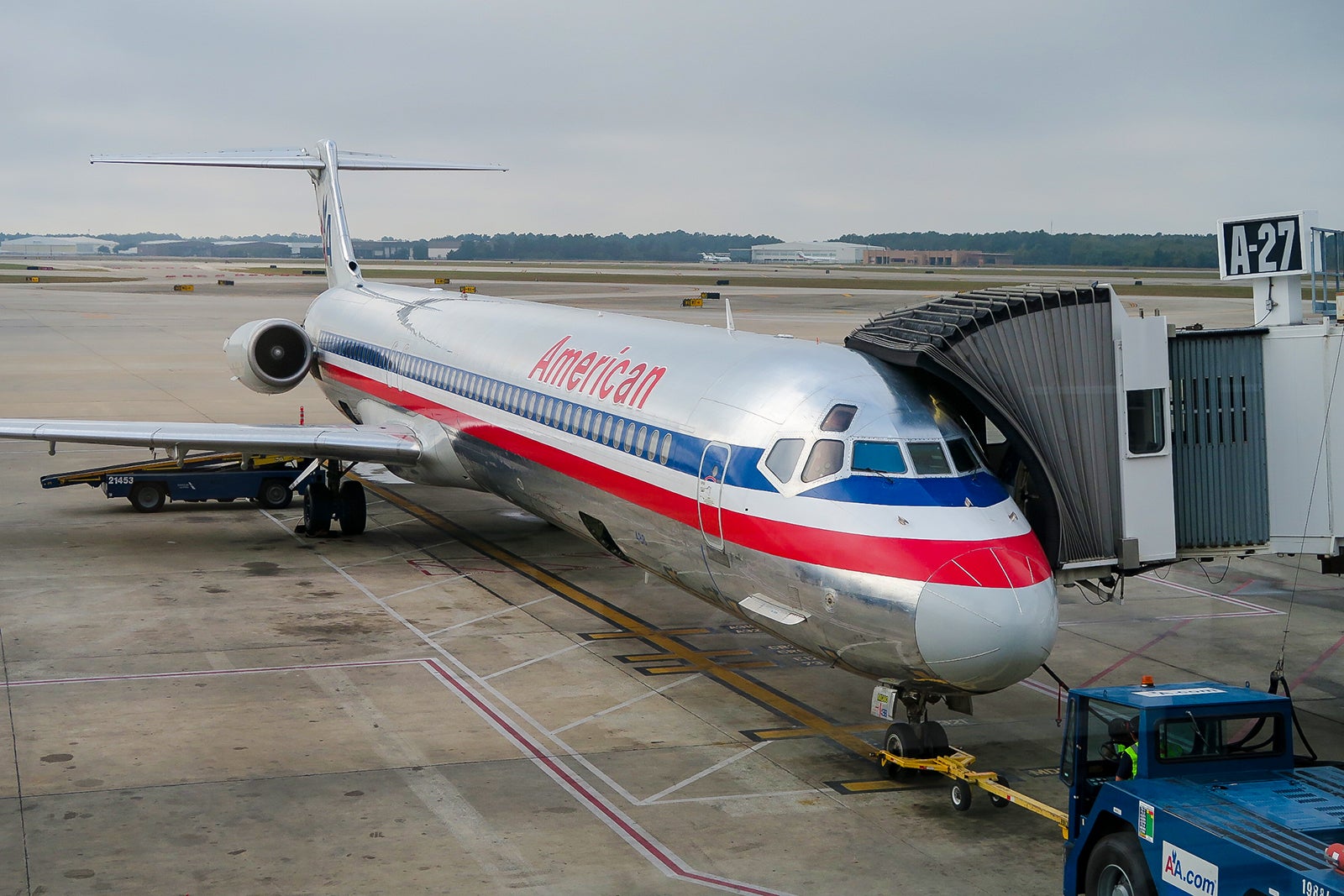 Why I'm not sad to see American Airlines retire its 'Mad Dog' MD-80s
This post contains references to products from one or more of our advertisers. We may receive compensation when you click on links to those products. Terms apply to the offers listed on this page. For an explanation of our Advertising Policy, visit this page.

American Airlines will retire the last of its McDonnell Douglas MD-80 aircraft on Wednesday (Sept. 4), saying "farewell" to a workhorse that the carrier has used for decades as it's grown into the world's largest airline. While many AvGeeks are sad to see it go, I'm not one of them.

Don't get me wrong, there's a lot for AvGeeks to love about the unique MD-80: the rear exit stairs, the mirror in the cockpit for the pilots to see the compass and the plane's ability to use its reverse thrusters to "powerback," or push back from the gate without the help of a tug.

There are some aspects inside the plane that I appreciate. The 2-3 arrangement in economy has meant Katie and I were able to sit in a row by ourselves for years as we flew the MD-80 in and out of our former home in Austin, Texas.

If you're a fan of these aspects, you might appreciate the wonderful memorialization of the MD-80 in this post by TPG managing editor Alberto Riva.

However, I feel like it's past time for the MD-80 to be retired from American Airlines' fleet. As much as it has been a workhorse for AA, the airline hasn't given much attention to the old birds' cabins in recent years. The oldest MD-80 in AA's active fleet started flying in 1989 and, for years, interiors on some of the carrier's MD-80s have been far from fresh.

There's also the lack of storage. The MD-80 was clearly designed at a time when passengers were able to check bags for free. The overhead bin space is minimal and it fills up quickly, leading to many passengers needing to gate-check their bags, especially if they are in a later-boarding group.

While AA's MD-80s have Wi-Fi — as the placard in the above photo proclaims — it's an early-generation ground-based system that leaves travelers more frustrated than connected. There are no inflight-entertainment screens, although that's sadly becoming the norm again on American Airlines aircraft.

And there's not even an option to stream entertainment from the Wi-Fi system. The MD-80s and Embraer E190s are the only aircraft in AA's mainline fleet that don't have streaming IFE and live TV. If you brought your own entertainment, you'll also need your own power source or an adapter. There are power outlets on the plane, but they are DC power outlets.

There's also the noise. Due to the engine placement along the side of rear fuselage, the MD-80 can be relatively quiet up front but very loud in the back. The Pratt & Whitney JT8D engines that power the MD-80 have been durable and reliable, but their fuel efficiency and noise footprint are generations behind the engines being installed on new aircraft.

I have a particular reason I'm not upset about the MD-80 heading to the airplane graveyard that comes from one especially memorable trip I had on the jet in October 2013.

Katie and I were taking a hop from Austin (AUS) to Dallas (DFW) — a route that's accounted for around half of the 24 MD-80 flights I have logged. Our approach into DFW on the then-25-plus-year-old aircraft (registration N466AA) was uneventful. Until it wasn't.

The pilots leveled off at around a hundred feet and remained at that level across the length of the runway. After pulling up to go around, the pilot explained what was happening to the startled cabin. Turns out there was an issue with our landing gear, and we'd just performed a flyby of the airport so air traffic controllers could check to see if the landing gear was down. From the flyby, we were told that the gear was down, but there was no telling if it was locked in place.

As a precaution, the airport cleared all aircraft off the taxiways and scrambled emergency vehicles as we circled. The flight attendants briefed the cabin on the brace position and reminded us about the command to take this position. In the end, we had an uneventful landing and taxi. But emergency vehicles tailed us to the gate just in case.

Thanking the pilots on our way out for the safe landing, I was curious which landing gear caused the trouble. Pointing to the landing gear indication, one of them said there were only two green lights instead of the usual three indicating that the two main gears and the front gear were down and locked. "Probably a burnt-out bulb," he explained.

It's still crazy to me that a burnt-out bulb could lead to an emergency landing. While a similar situation could happen on newer aircraft, I for one won't be sad to see the older bulb-and-switch-heavy "Super 80" cockpit fade into the history books.

So, while others can certainly disagree, I'm looking forward to celebrating the legacy of AA's MD-80s after they're retired rather than in American Airlines' fleet.