Articles
Mike Arnot is the founder of Boarding Pass NYC, a New York-based travel brand and a marketing consultant to airlines. A private pilot, he can sometimes be found above the skies of New York City.
Follow
Feb. 22, 2020
•
10 min read 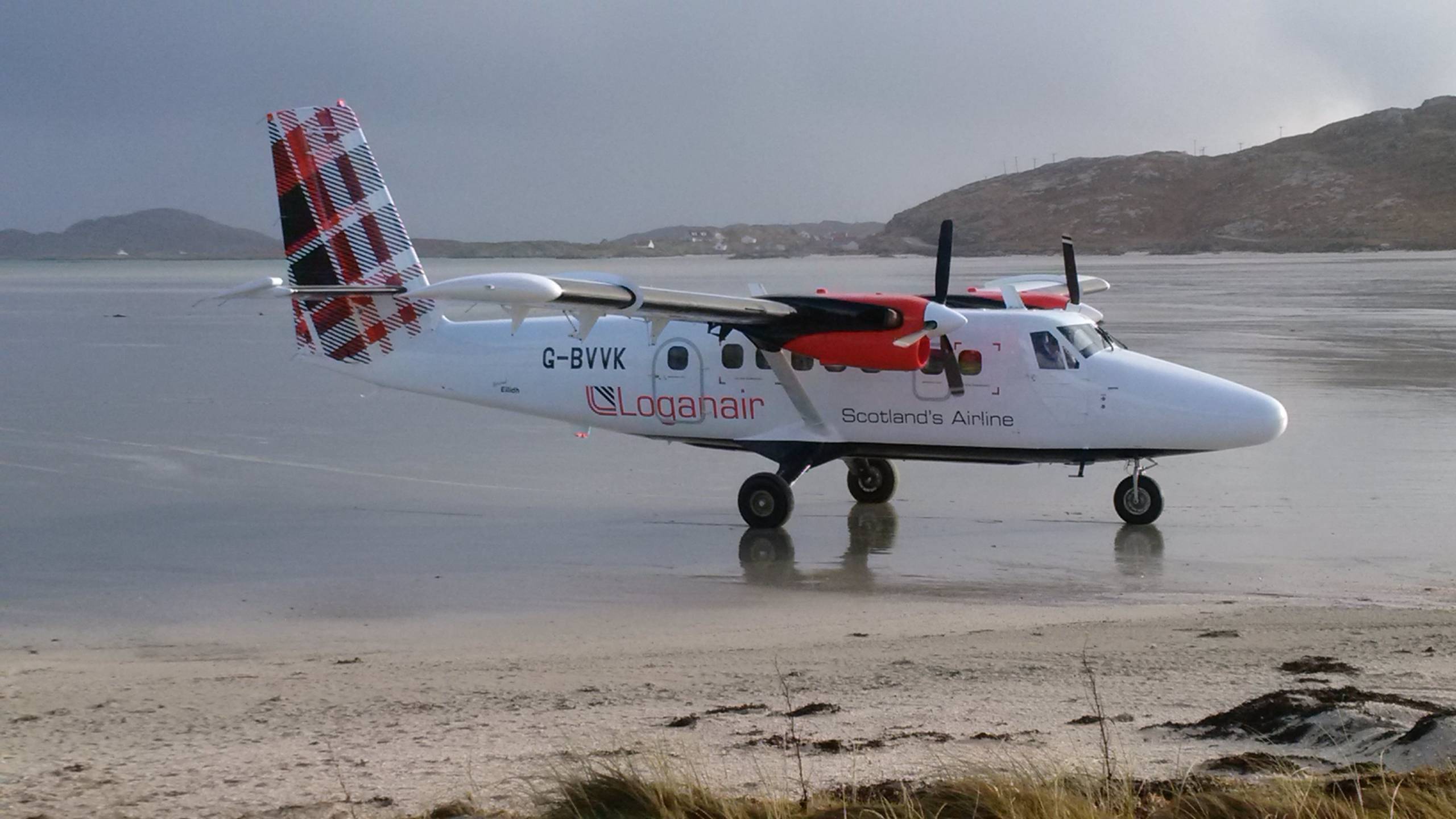 What kind of AvGeek are you, really, if you haven't done at least a bucket-list flight? More than a few remain on my list, I'm sad to say.

Here are 11 AvGeek bucket list flights — and you'll note that a lot of them involve flying on small planes that can get in and out of remote areas of the world.

Loganair is a small regional Scottish carrier with the distinction of running the shortest commercial flight — just shy of two miles in distance from takeoff to touchdown, between the islands of Westray and Papa Westray, in the Orkney isles, Scotland. The total flight time is 90 seconds.

I spoke with Captain Colin McAllister, who for 16 years has flown with Loganair, including years on this route. "It beats working for a living," he said, noting that his days are filled with lots of takeoffs and landings, a stick-and-rudder pilot's dream. The flight is actually three legs, between Kirkwall, Westray and Papa Westray, as opposed to shuttle runs back and forth between the two smaller islands, for a total of about 26 miles. McAllister says he climbs up to 250 to 500 feet above the ground, all the while pulling up the flaps, and then promptly dumping in flaps again before landing. It must all be done quickly, and often in frightful weather.

"I share the cabin with locals and tourists alike, with lots of banter and smiling faces," he said. It all sounds like a must-do flight for me.

2. Tea for one: British Airways all-business Airbus A318

It's all business class, and all glamour. A British Airways Baby Bus — the smallest member of the Airbus A320 family — was converted to all-business class configuration with 32 seats, and flies from London City Airport to JFK, with a refueling and customs-clearance stop in Shannon, Ireland.“You can’t beat the novelty of a long-haul flight in a small, all-business-class cabin," said TPG's own Zach Honig. "From boarding the A318 directly from the ramp at London City to the personalized service across the pond — there are a maximum of 32 passengers onboard, after all — it’s a must-have experience for any AvGeek.”

I'm partial to Harbour Air; my very first flight as a kid was on one of its DeHavilland Beaver prop planes, which is still flying today. Harbour's flights from scenic Vancouver, British Columbia, to Victoria, Seattle and even a lake near Whistler are the stuff of AvGeek dreams. The airline flies floatplanes exclusively, including Beavers, Twin Otters and a Cessna Caravan. Harbour Air says there's a seasonal sale for summer flights to Whistler coming in March. The airline also offers local scenic tours. It's a must-do in Vancouver.

United Airlines has one of the most unique scheduled routes in the world — the Island Hopper — linking Honolulu (HNL) to Majuro (MAJ), Kwajalein (KWA), Kosrae (KSA), Pohnpei (PNI), Chuuk (TKK), Guam (GUM) and back on a 737-800. We have flown the route and provided some tips on the 17-hour island hop. What's the point of flying this? Pretty views aside, it's so remote that a mechanic has to fly on every leg in case something happens — there's no one to fix the plane at those far-flung airports. One stop, Kwajalein, is a U.S. military base, where you cannot get off the plane unless you have orders to do so. United provides a vital transportation link across this portion of the Polynesian and Micronesian islands.

It takes all of five minutes from the time you depart Manhattan, and the views are amazing. It's the $195 flight between Manhattan and JFK on Blade, which skips all of the ground traffic. The views alone are worth the trip, at least once.

Whee! It's a steep descent into St. Barth's in the Caribbean. The largest of planes to land at Gustaf III Airport are Cessna Grand Caravans or DeHavilland Twin Otters, a common sight in the Caribbean. And to get here from the U.S., you'll typically fly into a "larger" airport such as Princess Juliana International Airport on the island of St. Maarten (itself a spot for AvGeeks to watch aircraft). The runway is only 2,170 feet long. Pilots are required to drop in over a roadway, another spot where AvGeeks gather to take photos.

We're partial to floatplanes, and getting to Nantucket Island by floats seems like a great way to travel from NYC. Blade is at it again, with departures from the East River aboard a Cessna Caravan single-engine aircraft on floats, destined for Nantucket or the Hamptons. How glam. If you're on the East Coast and have never felt the thump of floats hitting the water, this is a great way to do it.

Loganair strikes again, this time with the only commercial flight that lands on a beach. Yes, please! Your flight to Barra in the Outer Hebrides will land on Traigh Mhor, a two-mile strand of beach used as your runway. The opening of the runway is tide-dependent and beachgoers aren't allowed on the beach when the wind sock is flying. The Barra airport opened in 1936.

Cathay Pacific, Emirates and a number of other airlines fly the polar route over the North Pole. From Newark to Hong Kong, for example, you will fly very close to the North Pole. If you do this in the wintertime, there's not much to see except darkness, but it's still a bucket-list item for many AvGeeks.

10. Fly to Antarctica from Chile

There are no regularly scheduled flights between Chile, or anywhere, and Antartica. Typically, tourists can get to Antarctica by ship, and that's an adventure taking many days. But Aerovias DAP, a Chilean operator, offers day trips and overnight trips on Beechcraft King Air 300s and British Aerospace BAe 146s. It's a touch pricey for a day trip, however, at $5,500 per person with a minimum of five passengers on a King Air, or 20 on a BAe 146 — the smallest four-engined jet. And flying in an out this way is not exactly great for the environment. But if given the chance, I'd have my eyes firmly planted looking out the window.

This list began with the world's shortest flight, and it's fitting that it should end with the longest, Newark to Singapore. It can go 10,000 miles and take 18 hours and 30 minutes, depending on the winds. Sitting atop the world's longest flights at least for the next few years, even on a brand-new Airbus A350 it's a beast of a flight. It's so long that TPG's own Zach Griff penned 18 thoughts on the world's longest flight, one for each hour of flight. But it might soon be eclipsed by not one but two newcomers, Sydney to London and Sydney to New York, on Qantas. The airline flew two tests late last year as part of the so-called Project Sunrise. TPG's Ben Mutzabaugh made the 19-hour, 16-minute flight Down Under from New York on a brand-new Qantas Boeing 787-9, carrying just a few passengers. There's not an airplane in service today that can make the journey nonstop with a full load; Qantas will make a decision soon about whether it really wants to fly the routes, and if it does, it will likely do so with a modified version of the Airbus A350-1000.

For now, however, you can claim your bucket-list item with Singapore Airlines. One-way tickets from Newark to Singapore can go for just a bit over $1,000.

Mike Arnot is the founder of Boarding Pass NYC, a New York-based travel brand and a marketing consultant to airlines, none of which appear in this article.