5 Minutes to JFK: A Review of BLADE Continuous From NYC to JFK 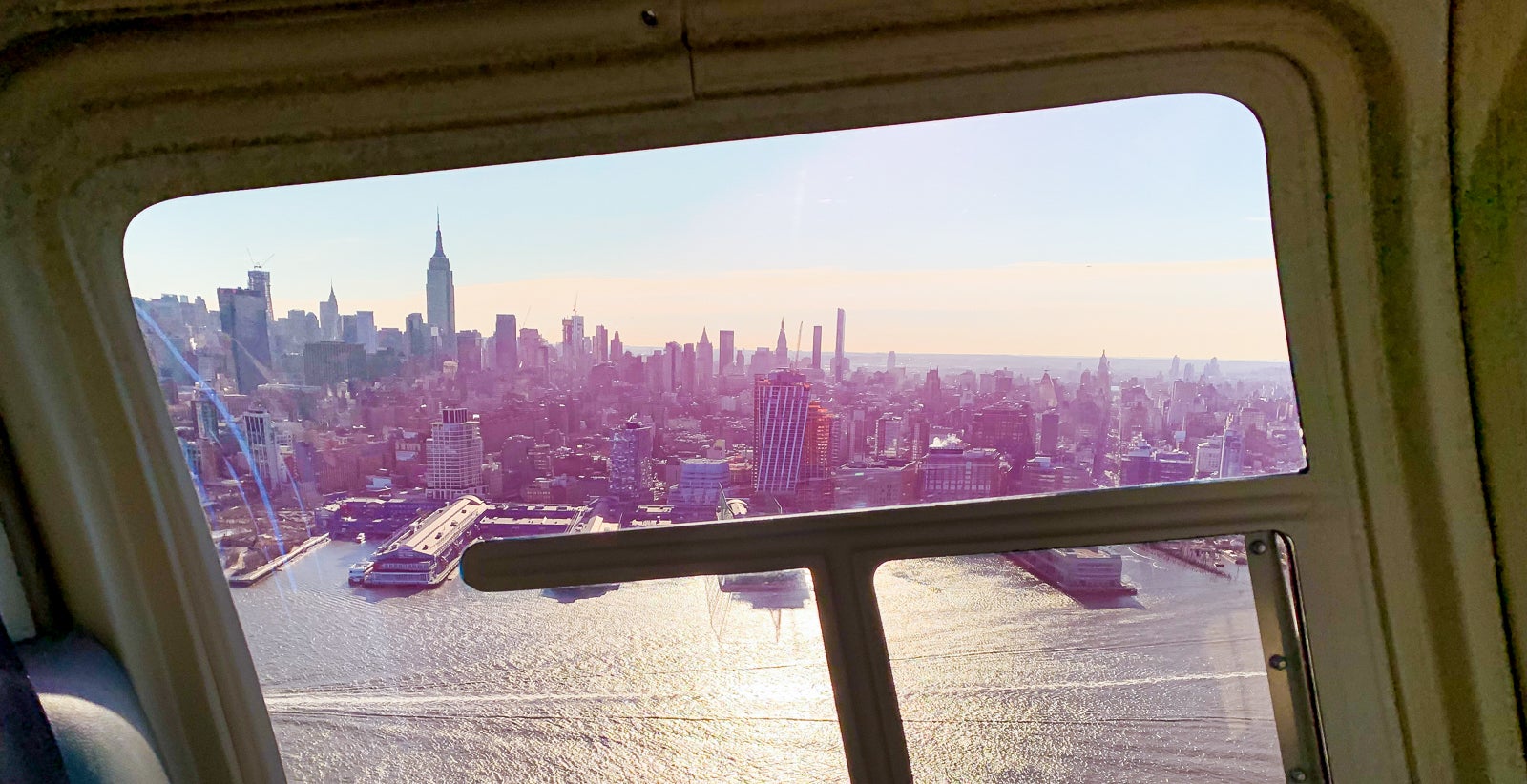 When you use Blade promo code BRIANF&F you and TPG will each earn $50 in Blade credits.
Note as of 5pm ET on 3/27: When using credits for a Blade Continuous flight, the maximum amount you can apply is $50, bringing the price down to $145 one way.

When BLADE recently announced that it was launching twice-hourly service to and from New York-JFK for $195 per seat, there was no shortage of volunteers here at TPG to give the new service a full review.

I just happened to be flying to Los Angeles out of JFK on the day after BLADE began this new service — and have missed my share of flights thanks to stand-still traffic between Queens and my home in the East Village in Manhattan. So, yours truly eagerly volunteered to take one for the team and tried it out for myself.

Would a five-minute chopper ride straight to the airport beat 90 minutes on the subway and a transfer to the AirTrain lugging a week's worth of luggage through turnstiles, tight stairwells, broken elevators and thousands of commuting New Yorkers?

Booking a BLADE ride was seamless and quick, and the website was user-friendly and laid out neatly. I later downloaded the app and found that it closely mirrored the website experience.

Once I clicked on flights from New York City to JFK on the website, I was prompted to select my desired arrival time. My JetBlue flight departed at 9:55am, so I said that I wanted to be dropped off at Terminal 5 between 8:11am and 8:50am.

I usually prefer to minimize wait times at the airport, but I didn’t want to leave anything to chance, since I had an important meeting to make in LA.

I confirmed that the schedule worked for me, then entered my personal details — including my weight.

This was my first time taking BLADE, so I entered the TPG referral code (BRIANF&F) and received $100 off, bringing the total amount due to $95, well below a typical Uber Black trip from the East Village to JFK, and not that much more than what you'd pay in a yellow cab or an UberX.

The confirmation emails provided most of the pertinent information about the trip, but I still had a question about the luggage restrictions. So I called BLADE's help line (844-FLY-BLADE). The representative was friendly and reconfirmed that luggage was capped at one piece weighing 20 pounds or less per person.

BLADE Continuous flies every weekday from 7am to 7pm in both directions. At the moment, the booking schedule is open through the end of April, but may be extended soon.

Booking a return trip from JFK is similar, except that you're asked to input your flight arrival time and information. BLADE representatives meet you curbside at arrivals to transport you to the next available chopper.

I didn’t select any upgrades for my transfer, but there were a few available. The following options were available on trips from JFK to New York City:

On transfers from NYC to JFK, BLADEflex and the meet-and-greet were the only upgrade options.

The BLADE West lounge is right off the Hudson River at the corner of 30th Street and 12th Avenue, west of the Hudson Yards development in Manhattan. I took an Uber to the lounge, but it's also a two-block walk from the number 7 subway line at the 34th Street-Hudson Yards station.

The exterior of the check-in lounge was the only thing about the BLADE experience that reminded me I was heading to JFK, since it was in what looked like a temporary trailer home.

Once inside, I found myself in what proved to be the nicest, chicest VIP lounge I’d ever visited. The friendly lounge attendant asked for my ID and confirmed my 8:20am departure for JFK.

She tagged my luggage and presented me with my red boarding bracelet.

The lounge was one long, narrow room, with the focal point being the bar. It featured large windows overlooking the heliport, which provided great views of the Hudson River and New Jersey.

There was just one bathroom in the lounge. Amenities such as dental kits and dry shampoo were available on request.

While it was a bit too early to fully indulge in the lounge’s alcohol selection, I did enjoy a freshly brewed tea that was served in a reusable plastic cup that I could take with me on the helicopter.

Aside from an assortment of soft drinks, the lounge also offered a few snacks, including protein bars, granola bars and nuts. I wouldn’t come here expecting a full meal, but it was certainly enough to hold me over until I got to the airport.

There was BLADE swag on offer as well, such as branded lighters, matches and iPhone fans. I don't fully understand why they offered lighters and matches, which certainly aren’t useful in an airport.

To celebrate the new service, I was given a small gift bag with a BLADE hat and flight certificate.

I had about 20 minutes to enjoy the lounge, where I caught up on email using the fast Wi-Fi network. Before long, the floor and walls of the lounge/trailer started vibrating, indicating that my helicopter was landing from JFK.

This service is designed to be shared with other passengers, but I was the only passenger on my transfer. As they say, Tuesdays are the best day to fly. Before long, we were airborne on our five-(yes, five!)-minute journey to JFK.

Here are my minute-by-minute thoughts from the journey:

"I feel like I’m flying Spirit Airlines. I’m wearing all of my outerwear to keep to the 20-pound-maximum luggage weight. At least there aren't any other passengers in the helicopter, because it would be a tight squeeze."

There were five seats in this helicopter: three facing forwards and two facing backwards. While the seats are made of comfy leather, there isn’t much legroom between the seats.

"The thrill of flying around Manhattan has not set in yet. Oh, but there it is -- that's the Empire State Building. Now we're already in Lower Manhattan. How did that happen?! Look at those views of the Freedom Tower!"

"Manhattan's behind us and the Long Island Expressway and Belt Parkway are just coming into view. Now I can clearly see BLADE’s value. It's halfway through the ride, and I’m pinching myself as I fly past the stop-and-go traffic that has threatened to ruin so many flights for me. And who knows what subway delays are happening underground."

"Hello, Queens and Brooklyn. Nice to see you. They both really look quite nice from above. I really should be spending more time there. (Mental note: Make reservations at Lilia and Taverna Kyclades upon landing.)"

At this point, the pilot let me know we’d be descending into JFK shortly. I felt like the co-pilot when I responded, “Roger that.”

This is also when I realized that there were two USB ports between the two backward-facing seats. Guess I missed out on four whole minutes of phone charging potential.

"This. Is. Freaking. Awesome."

When we caught view of JFK, my eyes were peeled to the window. As we began our descent, I spotted a Delta 757 departing from Runway 31L bound for SFO. These are priceless moments for a true AvGeek.

In the back of my mind, I reminded myself that, only five minutes before, I was in Manhattan. Had I taken an Uber to JFK, I would’ve been about five blocks from my apartment.

It was too bad we didn’t enter a holding pattern before landing, because my five minutes of heaven ended way too quickly. Before long, I was escorted off the helicopter and whisked through the Sheltair general aviation facility at JFK.

I managed to grab a photo of a JetBlue A321 departing for Seattle.

There was a GMC Yukon XL waiting for me at the curb. My bags were loaded, and the driver drove me directly to Terminal 5, where I re-entered the madness that is JFK.

And for those counting, it took longer to get to T5 from the general aviation terminal than it took to get to JFK from Manhattan. And as I entered the TSA PreCheck line, I started to wish that BLADE could take me all the way to LA.

There is simply no better or more efficient way to get to or from JFK and Manhattan than BLADE. The thrill of a scenic, five-minute helicopter ride that begins and ends with perfectly executed service is otherworldly. Forty minutes from door to door from Manhattan to JFK during rush hour is simply magical.

If you're pressed for time, or if you're an AvGeek or just want to begin or end your escape from New York in luxury, this service is the way to go. At $195 a seat, it actually isn't insane to quit Uber, download BLADE's app and get your camera ready. Your Instagram feed will thank you later.

RELATED VIDEO:
This Helicopter is made of 100% composite materials | Airbus H160 Tour