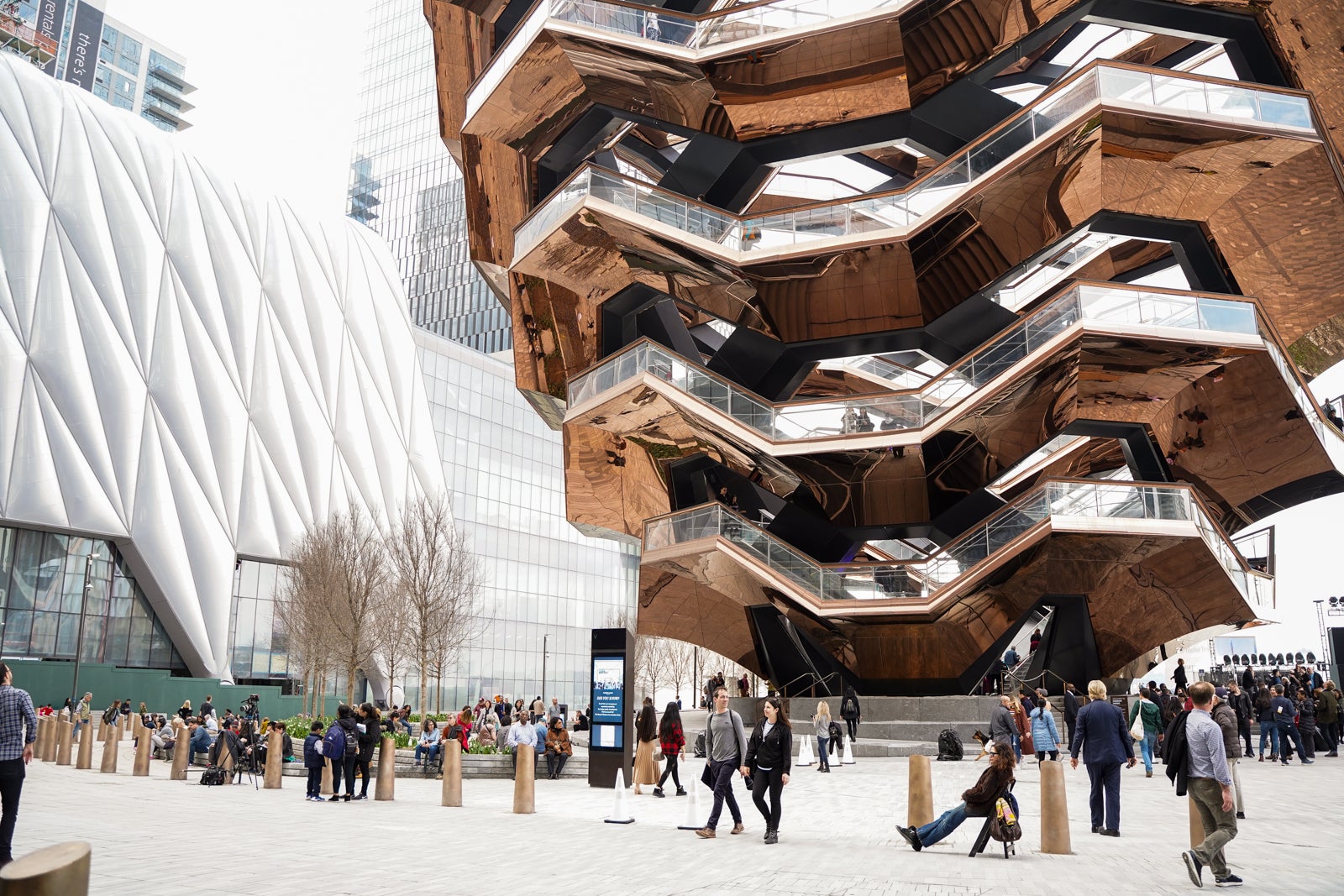 New York City's Newest Neighborhood Just Opened to the Public
This post contains references to products from one or more of our advertisers. We may receive compensation when you click on links to those products. Terms apply to the offers listed on this page. For an explanation of our Advertising Policy, visit this page.

Restaurants and hotels open with head-spinning frequency in New York City, but it’s not every day an entirely new neighborhood makes a grand debut — especially on the densely populated, 22.8-square-mile island of Manhattan.

But on the far west side of the borough, a development has been slowly rising over the city’s acres of active railyards since construction began in 2014. And on Friday, March 15, New York’s newest neighborhood, Hudson Yards, officially opened to the public. It’s the largest private real estate development in the history of the country.

Things materialized quickly after TPG visited the construction site in mid-February. The scaffolding has been cleared to reveal The Shops & Restaurants at 20 Hudson Yards (a mixed-use space connecting two existing office buildings); and a public square anchored by the Vessel.

No doubt one of the single biggest attractions for travelers, the Vessel is an interactive public sculpture wrapped in copper-colored steel that comprises 154 interlocking staircases. It’s a futuristic, immersive piece by Thomas Heatherwick and Heatherwick Studio that, if I’m being honest, reminded me instantly of a Mondoshawan spaceship from Luc Besson’s 1997 cult classic, “The Fifth Element.”

During a walkthrough on the day it opened, I saw the sculpture’s staircases filled with travelers taking photos — even taking turns putting their phone on the ground and capturing a picture straight up, through the heart of the Vessel.

Yet after climbing to the top of the Vessel on Friday, nothing about the view below seemed all that alien. Perhaps it's because some of the Hudson Yards high rises have stood since 2016. Or because on the day of its official opening, the neighborhood was already flooded with people snapping selfies and standing in line for Shake Shack. But Hudson Yards does in fact feel less like a tourist attraction and more like, well, New York.

“It’s going to be an extraordinary addition to New York City and the skyline,” said Christopher Heywood, executive vice president of global communications for the city’s official tourism organization, NYC & Company. During a phone call with TPG, Heywood described how Hudson Yards figures into the city’s plan for promoting tourism. “I think there will be huge curiosity among our local New Yorkers, but I also think visitors will be very excited about this new project.”

But both NYC & Company and Related Companies, the real estate firm developing Hudson Yard (in partnership with Oxford Properties Group), envision Hudson Yards as a neighborhood primarily for New Yorkers.

“Locals will tell friends and family,” Heywood said. “Locals create the vibrancy for neighborhoods. Once [they] do that, visitors follow.” And the infrastructure is certainly there, with thousands of residences including affordable housing, more than 100 shops and restaurants from some of the culinary world's top names.

Heywood said this wouldn't be the first time a massive development transformed a barren stretch of New York City. "The one I can point to that most closely resembles this is the revitalization of lower Manhattan, when One World Trade and the One World Observatory reopened," Heywood said. "I think certainly for locals it's always very exciting [they] can visit ... and live in these new neighborhoods."

Though Hudson Yards may not edge out the Empire State Building or Rockefeller Center for first-time visitors, Heywood says it's an important destination for repeat visitors looking to rediscover the city. "This is a place that continuously evolves and reinvents ... We're giving them a new reason to return. If you haven't been to New York City in a couple of years, you're missing out on something quite extraordinary."

Though Friday marked the official opening day, the Hudson Yards development is far from complete. The Shed's Bloomberg Building (a multidisciplinary arts space with a retractable roof) is opening on April 5, and major names like Björk are already on the program for the inaugural season. Then there's the outdoor observation deck, Edge (the tallest of its kind in the western hemisphere), which won’t likely open until 2020. And Equinox has just touted June as the expected opening date for its much-anticipated, first-ever hotel.

From varying platforms on the Vessel, you can look out across the uncovered western railyards — part of the second phase of Hudson Yards, which promises to add an additional 6,220,000 square feet to the neighborhood. Here, the use of space skews more local, including additional residences and a 750-seat public school.

According to Heywood, it’s “just the start of something big.”

All photos by Sara Wass / The Points Guy.

Related stories
The ultimate guide to earning elite status with United cards
American Airlines forgot it had landing slots at JFK. Then it lost some of them.
After 19 months, United Airlines is officially suspending flights at New York's JFK airport — again
17 ways to earn lots of Marriott Bonvoy points
Featured image by (Photo by Sara Wass/The Points Guy)