Flying to Santa's home: Why some commercial routes pass over the North Pole

Articles
Mike Arnot is the founder of Boarding Pass NYC, a New York-based travel brand and a marketing consultant to airlines. A private pilot, he can sometimes be found above the skies of New York City.
Follow
Dec. 24, 2019
•
8 min read 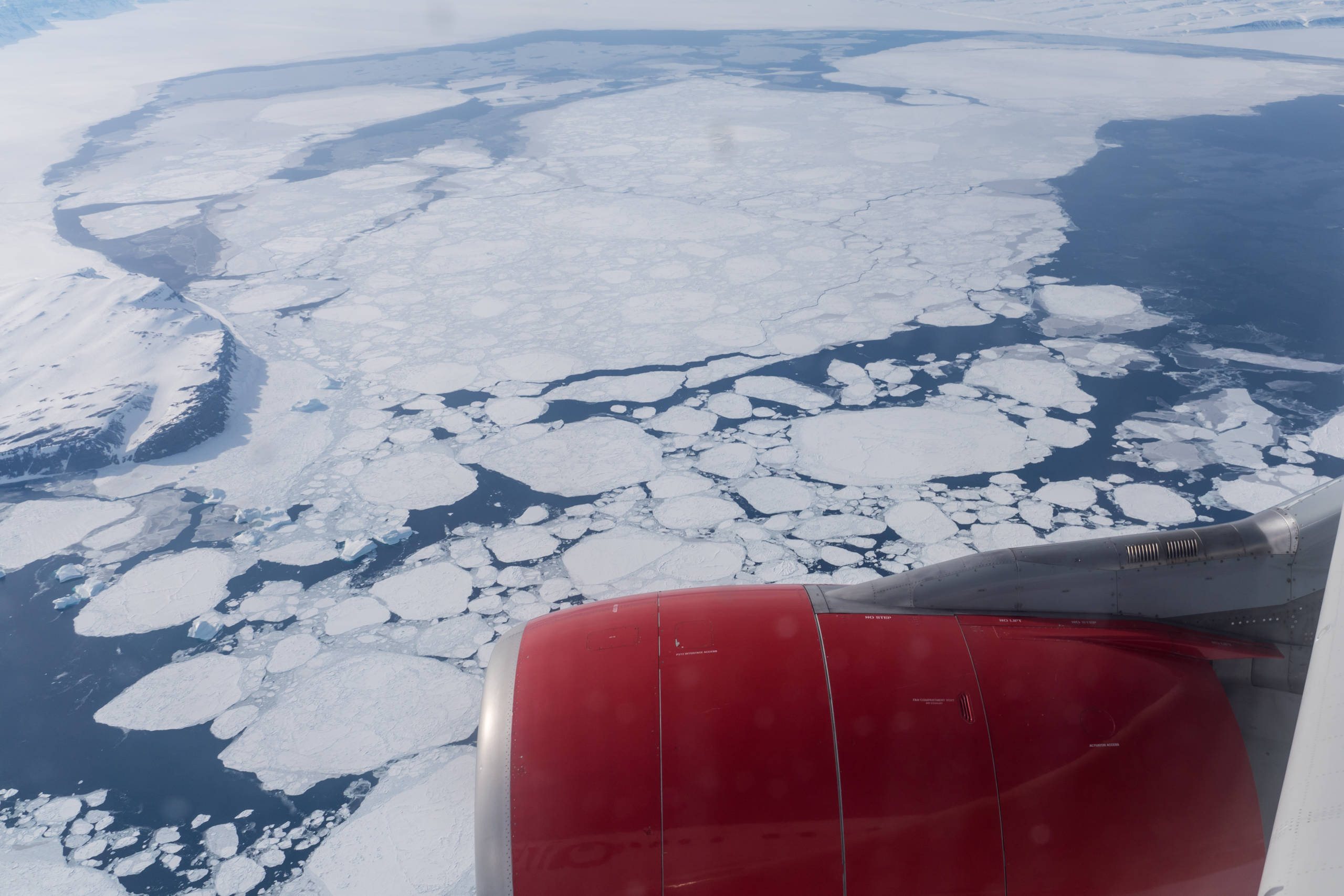 Flying to Santa's home: Why some commercial routes pass over the North Pole
This post contains references to products from one or more of our advertisers. We may receive compensation when you click on links to those products. Terms apply to the offers listed on this page. For an explanation of our Advertising Policy, visit this page.

Sometimes airlines play Santa Claus. On some flights from North America to Asia, the shortest route is right up over the North Pole — or at least, very close to it.

It's the polar route, and while it's flown many times every day by a variety of airlines, it still is one of the most awe-inspiring feats in commercial aviation.

Airlines operating polar flights include the Scandinavian carriers SAS and Finnair, United Airlines, Emirates (for example from Los Angeles to Dubai), Air Canada and Cathay Pacific. For an example of what flying the polar route entails, we'll take a closer look at Cathay Pacific 841, which leaves JFK at 9am for Hong Kong. After taking off, the Boeing 777 does not point its nose in the direction of Hong Kong on the atlas; instead it flies due north.

It will land at the HKG airport between 15 and 16 hours later, depending on the winds and routing chosen.

It's hard to tell from this FlightAware map, but this Cathay Pacific flight flies a so-called "great circle" route coming very, very close to the North Pole. (Great circle routes are the shortest possible between two points on a sphere.) On flight-tracker sites, you will see portions of polar routes as estimates, since flight-tracking systems currently available on the web don't follow at those high latitudes and in the middle of oceans (at least, the free versions).

In fact, the closest our flight comes to the North Pole is 85.6 degrees north, with the North Pole being 90 degrees. Plotting it on Google Earth, the plane passes some 304 miles from Santa's workshop. If you're a passenger on board, look out the window, and you could see it. And if not, you're still gazing out over the most northern reaches of the planet, far inside the Arctic Circle.

But the flight isn't set up this way for the views and bucket-list items. The polar route can shave almost five hours off the conventional route between JFK and HKG for Cathay Pacific, involving a stop in Vancouver and generally hugging the northwest coast up to Alaska. Indeed, the difference is stark: the polar route is a touch over 8,000 miles and can be flown nonstop, but the more southerly one is closer to 9,000.

The savings for airlines is huge.

Consider this comparison made by the Federal Aviation Administration in 2001 for a route between JFK and Beijing (PEK). Compared to so-called conventional tracks, which did not overfly the Pole, the polar route could save around one hour of flight time, but crucially, a whopping additional 90 passengers could fly, representing possible additional revenue of hundreds of thousands of dollars per flight.

Flying over the North Pole isn't like flying over populated areas with many airports offering the possibility of a diversion in an emergency. In 2001, the FAA published guidance for certification of polar operations by commercial airlines. The regulations require airlines to consider alternate airports for diversion, strategies to handle very cold fuel, the ability for communications, emergency medical kits, and a minimum of two cold-weather anti-exposure suits for crew. In addition, the FAA required test flights. If you want to read more about the FAA requirements for Polar Operations, click here.

The twin-engine planes that dominate long-haul flying today weren't always able to cross such vast expanses, either. Twins need a special certification called ETOPS — "extended twin-engine operations" — in order to fly so far away from possible diversion airports, a precaution in case of engine failure. Four-engined planes like the 747, the reasoning goes, have three engines left to continue flying safely if one goes out; twins do not have that margin, so they need to demonstrate stringent engine performance.

Then there was the Cold War. Many nonstop polar routes overfly what used to be the Soviet Union, which restricted overflights by foreign civilian aircraft, and were not feasible until after the USSR collapsed and its successor nations opened their airspace.

Polar routes were possible in the Soviet era as well, for example between Europe and Asia, if they skirted the USSR and went through one or more fuel stop. For example, SAS, the Scandinavian carrier, claims to be the first commercial airline to fly the polar route, during the middle of the Cold War. According to SAS, "on November 19, 1952, the Arild Viking, a DC-6B, took off from Los Angeles, with 22 dignitaries on board, en route to Copenhagen [...making] stops in Edmonton, Canada, and Thule, Greenland, and landed in Copenhagen 28 hours after it left Los Angeles."

When the jet age began, SAS was able to fly one-stop over the pole, for example with Douglas DC-8 and DC-10 jets from Copenhagen to Tokyo via a fuel stop in Anchorage.

After the Cold War, Finnair flew non-stop over the Arctic between Tokyo and Helsinki, with a DC-10. As more modern jets entered service with nonstop ranges that went beyond 8,000 miles, routes such as New York to Hong Kong nonstop became possible. It wasn't until 1998 that Cathay Pacific operated the first non-stop service between Hong Kong and JFK, dubbed Polar One for its polar route trajectory, which it flew with a four-engine Boeing 747-400. United later began flying a twin-engine 777 on the Newark to HKG route.

Where can flights divert?

Much of the route between North America and Asia overflies the far north reaches of Canada. So, how many cities are up there? Statistics Canada reports that "the land area of Northwest Territories [of Canada] is 1,143,793.47 square kilometres with a population density of 0.0 persons per square kilometre."

That is particularly sparse.

That said, there are still several options for diversion in the case of medical emergencies or mechanical issues. For example, Whitehorse, Yukon, Yellowknife, Northwest Territories, and Anchorage, Alaska all have modern medical facilities; the latter is a full-fledged city. At the furthest point north on Cathay Pacific 841, Anchorage is around 1,400 nautical miles away, a two-hour diversion. Barrow, Alaska (now known as Utqiagvik, with a population over 4,000), would only be around 850 nautical miles away, around a one-hour diversion. And there's also Alert, the closest settlement to the North Pole, home of a Canadian Armed Forces base — and the reason that Canadians can claim Santa as one of their own. (Then again, so do Finns.)

You can explore Cathay 841's great circle route over the North Pole in Google Earth.

And the next time you fly a polar route, open your window shade when you're near Santa's workshop.

Related stories
Bask Bank raises the mileage earning rate on its AAdvantage savings account — what you need to know
Targeted Premier 1K members eligible for bonus miles when checking in and checking a bag on the United app
Current airline elite status match and challenge options you should know about
Business-class deals are back: This month’s Flying Blue promo awards
Featured image by ullstein bild via Getty Images