The 10 Upcoming Business Class Products We're Most Excited For

Articles
Max Prosperi is a part-time frequent flyer and travel writer and full-time student. Based in St. Louis, Missouri, Max covers a variety of topics with a focus on points, miles, and aviation.
Follow
July 07, 2019
•
16 min read 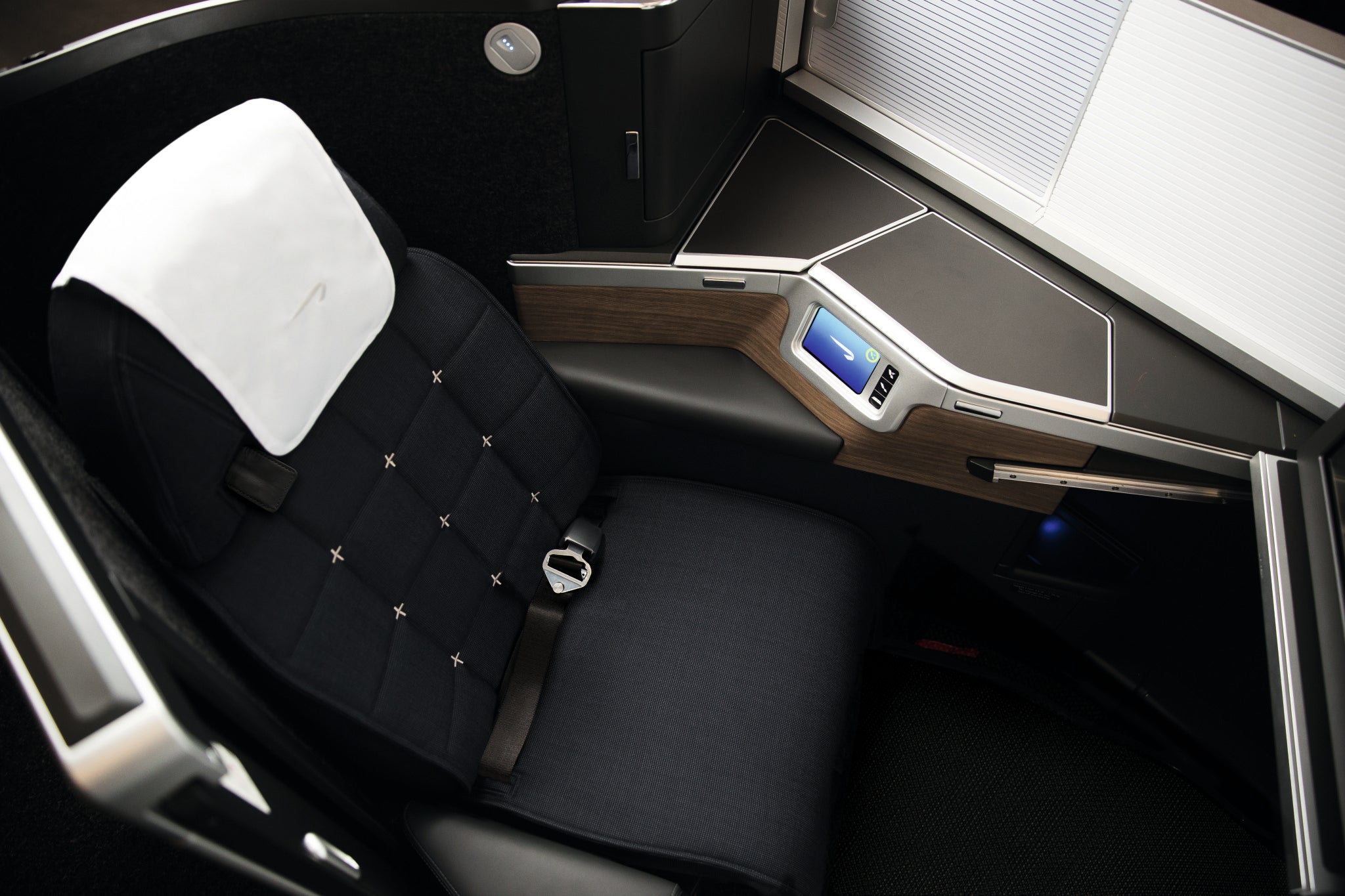 With airlines doing away with first class, it is more crucial than ever to offer competitive business-class products. Most airlines make the majority of their revenue on long-haul flights from premium seats. When an airline offers a subpar business class, even at a lower price, that airline will lose out on valuable premium revenue.

So it's no surprise that airlines across the globe are working to improve their business classes. Gone are the days of angled lie-flat seats and overhead TV monitors. In 2019, major airlines including British Airways, Virgin Atlantic and Turkish Airlines will debut cutting-edge business-class products.

These products will feature fully lie-flat seats and even privacy doors. With these products set to take to the sky over the next few years, now is the time to strategize on how to earn enough points or miles to be able to try these new business-class products out for yourself.

With 2019 and 2020 set to become landmark years for new premium products, TPG has compiled a list of the top 10 business-class products we're most excited for. The first few on this list will be no surprise, but there are still a couple in there that will make AvGeek tongues wag.

Finally. After a decade of offering what has become a severely outdated business-class product, a new Club World seat is set to take to the skies.

British Airways' new Club World Suite is just weeks away from making its first flight. British Airways will operate intra-European flights featuring this all-new product when the airline's first Airbus A350 goes into service this month. The A350 will be the first aircraft in the fleet to feature the new Club World Suite, with the product making its way to other long-haul aircraft over the next few years.

Though travelers will have to wait a few years before the new Club World Suite is found on board most of the airline's long-haul aircraft, it looks like the wait will be worth it — the seats will eschew the current 2-4-2 layout in favor of a much more competitive 1-2-1 configuration, and each seat will feature a sliding privacy door, direct aisle access and a swanky design including wood finishes.

Virgin Atlantic's Upper Class product is already competitive in many ways, but the seat itself currently found on the majority of the airline's aircraft is fairly outdated, consisting of fully lie-flat seats in a herringbone configuration. While the current seat is comfortable enough, there are plenty of downsides, including limited recline, seats that don't allow for views out the window and severely limited storage space.

Luckily, Virgin Atlantic's new Upper Class product addresses these complaints — and does so with the airline's typical flair. The new, fully lie-flat seat in a 1-2-1 configuration is the first of its kind. Other notable features include a new inflight-entertainment system that can be linked to a passenger's mobile device via Bluetooth, a sliding privacy partition and increased storage. Upper Class passengers will also be able to socialize in the airline's new Loft, which will replace the onboard bar.

Like British Airways, Virgin Atlantic will debut its new Upper Class seat with the delivery of its first Airbus A350, which is scheduled to enter service on September 10, 2019, on flights between London Heathrow (LHR) and New York-JFK.

There is no question that Lufthansa offers one of the world's top first-class products of any airline. However, the airline's current business-class product leaves a lot to be desired, with a solid soft product in business class brought down by seats that are far from competitive.

Thus the relief when, in 2017, Lufthansa unveiled the airline's next-generation business-class seat, which looks like it's going to be a big upgrade. Lufthansa passengers will finally be able to enjoy a business-class product that features direct-aisle access. The new seat also features throne seats in the center of the cabin.

Unfortunately, most travelers are going to have to wait a while before they're able to fly in Lufthansa's new business class. Lufthansa's Boeing 777X (expected in 2020) will be the first aircraft to feature the new seats, with other long-haul aircraft receiving the product over the next few years.

4) Air France Business Class on the A350

Travelers either love or hate Turkish Airlines' current business-class product. While Turkish offers what might be one of the best soft products in the sky, the airline's seats are underwhelming.

Finally, with the arrival of Turkish Airlines' Boeing 787s and Airbus A350s, the airline's business-class product is set to receive a big upgrade, thanks to the Stelia Aerospace Aurora business-class seat. In a 1-2-1 configuration, all seats will be fully lie-flat and feature direct-aisle access. The stunning new product features an 18-inch IFE display, privacy dividers between seats in the center of the cabin, and Alcantara-padded seat pods. This new biz class will be quite similar to what is found on Singapore Airlines' regional widebody aircraft.

Unfortunately, Turkish Airlines has no plans to retrofit its existing fleet. The new Turkish Airlines business-class seat, which will be flying to North America starting in early August 2019, will be found exclusively on the airline's Boeing 787s and Airbus A350s.

EgyptAir offers a pretty mediocre business-class product on its long-haul routes operated with Boeing 777s or Airbus A330s, with seats configured either in a 2-2-2 or 2-3-2 layout. However, now that it's flying brand-new Boeing 787-9 Dreamliners between Cairo (CAI) and Washington Dulles (IAD) and soon New York-JFK, passengers will be able to enjoy fully lie-flat seats in a 1-2-1 configuration.

We haven't been on board yet, but the airline is using the B/E Aerospace Super Diamond reverse herringbone seat, which is the same product that many airlines including American Airlines use on the 787. Though it's not the best seat in the sky, it's sure to be a massive improvement over EgyptAir's current product.

Another airline with a rather large international route network that offers an underwhelming business-class product is Aeroflot, which has never been known for luxury. This might change when Aeroflot takes delivery of the airline's first Airbus A350, featuring a brand-new business-class product.

This product was only recently confirmed, with few details. It is speculated that, like EgyptAir, Aeroflot will install a seat similar to that on American Airlines' Boeing 787-9s and WestJet's Boeing 787-9s. This means that, for the first time in the airline's history, Aeroflot will offer a business-class product with direct-aisle access for all seats.

Soon, yet another business class seat will enter the trans-Pacific market. China Southern is set to introduce its latest business-class product with the introduction of the Airbus A350 into its fleet.

China Southern's Airbus A350s will feature Recaro lie-flat seats in a 1-2-1 configuration, which will certainly be competitive on trans-Pacific routes. Though the product looks quite comfortable, the blue leather seats, beige plastic and light "wood" trim color scheme leaves a lot to be desired, in our opinion.

The airline will take delivery of its first A350 later this summer and will initially fly between Chinese cities before operating long-haul flights.

Pakistan International Airlines operates a fleet of Boeing 777s on long-haul flights. Though some of these aircraft are fairly new, the business-class product found on its 777s is very dated. PIA offers angle-flat seats in a 2-3-2 configuration. As one might imagine, the experience isn't best-in-class. However, PIA will offer lie-flat seats with direct-aisle access in the near future.

PIA has not officially announced the product, but there are confirmed reports that the airline has agreed to install the Stelia Aerospace Solstys seat on select Boeing 777s sometime in 2019. The Solstys business-class seat is quite basic but still comfortable. It's found on Alitalia and Iberia long-haul aircraft, among others.

The last product on this list has yet to be announced, so details are scarce. However, reports indicate that Air New Zealand is developing its new business class seat in-house.

There is speculation that Air New Zealand will introduce its new business-class product when the airline takes delivery of its first Boeing 787-10. Since Air New Zealand only recently placed an order for the aircraft, its first -10 won't be delivered until 2022.

There are reports that Air New Zealand will announce its new business-class product as early as the end of this year. Until more details are announced, we will have to wait in suspense.

With business class more or less becoming the "new first class," airlines across the globe are investing heavily in creating top-tier products with the goal of attracting coveted business-traveler dollars. And for those with a stash of points and miles, all this innovation means traveling up front is about to get even better. We can't wait to get onboard the products mentioned above to find out for ourselves.