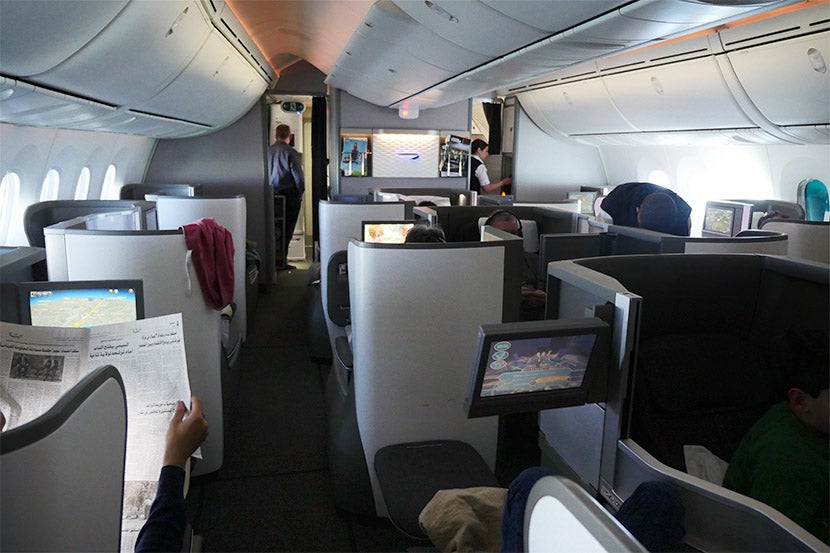 If you’ve ever wanted to fly from London to New Orleans (MSY), now is the time. Before British Airways began offering its new 787-8 three-cabin aircraft on this new direct service, the only way to get to NOLA was by connecting. And nobody likes adding to their travel time.

The Club World (aka business class) cabin means a seat that can convert into a fully flat bed, unlike on connecting domestic US flights, which typically only offer a reclining seat. It's this critical point that makes BA the unrivaled business-class option between the two cities. But is it totally perfect?

Having wanted to go to Louisiana’s party town and the jazz capital of the world for many years, I booked a round-trip ticket, priced at £1,302 (approximately $1,640), heading outbound in Club World and returning in World Traveller Plus (premium economy). That's a really good fare, as typically this route in those cabins would cost over £2,100 ($2,600). Because I booked so early, having followed BA’s plans to launch the route in early 2017, I was fortunate to find the lower-fare buckets for a decent price.

Selecting a seat prior to departure incurs an additional cost (£77, or a shade under $100, per passenger in Club World) if you do not have Executive Club or oneworld status. I chose seat 2B, to ensure easier aisle access. The bulkhead seats were already occupied, otherwise they would have been preferable (they offer three inches more legroom).

To book, I used my BA Premium Plus Amex credit card, which rewarded three Avios (BA and oneworld mileage) per pound sterling spent on British Airways' own product. For a non-BA product, the card would've rewarded 1.5 Avios per pound.

This card, however, is only for those with a UK address, and also has a high interest rate, typically 76% APR, so I always ensure I clear the card each month to avoid interest.

I arrived at London Heathrow Terminal 5 around 12:50pm to little traffic. There was a dedicated check-in area for Club World passengers and Executive Club Bronze and Silver members (oneworld Ruby and Sapphire, respectively).

As an Executive Club Gold (oneworld Emerald) passenger, I checked in at the First Wing, a dedicated passage for First and Executive Club Gold passengers directly from the bag drop to the First lounge — no need to pass all the shops. I was off the Piccadilly Underground line and into the lounge in literally 10 minutes.

As with most international flights out of Heathrow T5, the departure gate was still a train ride away within the terminal. I’d already decided that I’d grab a quick bite in the First lounge (as a Gold or Emerald member, it’s worth sticking around for a bit to enjoy the better food and self-serve champagne), then head over to the Galleries Lounge in T5B well ahead of time.

I advise Club World passengers to avoid the T5A Galleries North/South lounges, because they’re almost always horribly busy. The Galleries lounge at T5B is just as well-equipped without the sheer number of people. At T5A it’s hard to find a seat; at T5B it’s hard to not find yourself surrounded by 10 empty ones.

The food offering in T5B is usually simple, so don’t expect gourmet. In my case, it did the job: Rice, curry, pasta, potatoes, salads, soups and fruit were roughly all that were available at the self-service counter. Nothing was made to order, and there was no table service in this lounge, standard in all Galleries lounges.

I was most interested in the yogurt-covered honeycomb available at the bar. I had this with a glass of the champagne, which was brought to me promptly at my seat, where I was watching planes taxiing out.

No announcements were made in the lounge, but there were enough boards to keep an eye on things. I had a departure from gate B32, which was just a couple of minutes' walk from the lounge, and I arrived bang on time, just as the announcement was being made for boarding.

After passengers needing extra assistance and those with youngsters were boarded, Club World passengers were called alongside Executive Club Gold (oneworld Emerald) members. I sailed through and down the escalators, ready to board.

En route I caught a glimpse of the 787-8 aircraft that was to carry us. With its remarkable fuel efficiency, the Dreamliner is a critical factor behind BA and other airlines opening so-called "long and thin" routes like Heathrow to New Orleans, where you don't need large passenger capacity but you do need low fuel consumption to make a profit. The 214 seats and fuel economy of the 787-8 make it a perfect jet for this route.

As the 787-8 is a little smaller than something like the 777, it also means a different cabin layout, similar, really, to what you’d find on the upper deck of the A380. In Club World that means a 2-3-2 seating arrangement.

Anyone who knows the British Airways Club World arrangement will know it’s often the subject of scrutiny. And rightly so: Because the seats are arranged in forward/backward pairs (forward, backward, forward for the trio in the middle), it means everyone in all but one row to the bulkhead will have to step over another passenger’s legs to get out of their seats, or have to be stepped over.

This Club layout is due to change in the future. It’ll take a long time before it’s implemented across the fleet, no doubt, but should hopefully mean direct aisle access for all passengers and, therefore, a more competitive and private product.

I’m firmly in the aisle-seat camp, as I like to be able to get up and down as often as I please without interrupting a neighboring passenger. On this flight, mine wasn't the widest seat going (at 20 inches), but I was content with the comfort. The couple in front of me, on the other hand, seemed surprised at how small it was.

As the flight was full in the cabin, I had a neighbor who, in that very British manner, politely ignored the fact we were facing one another. At soon as it was available, the frosted plastic dividing screen, activated with the press of a button, was raised, and we had fuller personal privacy. This screen needed to come up and down for service, however, which could be rather noisy, especially if you were trying to sleep.

Both tray table and entertainment screen were stowable, so you didn't need to be staring at a blank one if you wanted a bit of a time out. The tray was far too low to use when in the fully flat position, however, which was annoying when I was trying to lay down flat or at an angle.

To get the seat into the fully flat position, it was just a case of manually lowering the footrest, then pressing and holding the controls. I did this while sitting in the seat, which was better than the Virgin Upper model of getting out of the seat to get the seat flat.

There were three bathrooms designated for the Club World cabin on the 787-8, which was a fair proportion to the maximum of 35 passengers. The bathroom doors were the new design (which is somewhat fussy to operate given the way they fold), and the spaces were adequate for a quick visit. Unlike the World Traveller and World Traveller Plus cabins, the Club World bathrooms had both standard hand wash and Elemis Spa hand wash alongside hand moisturizer.

In-flight entertainment (IFE) offered a wide selection of movies, the usual arrangement of BBC News and a smattering of TV shows.

Getting the screen into position was easy enough, although the release latch could be fiddly. It could be angled downward to some degree, too, which was really handy when I was watching something in a seated position.

Every passenger had access to an individual power socket, which was toward floor level with an accompanying USB socket. I found the position to be awkward, given the position toward my feet. But there was also a retractable tray designed for shoes, which was also the perfect size for a laptop. Fortunately, there was a second USB socket per passenger, positioned next to the in-flight entertainment controller, which was ideally placed for plugging in a phone or tablet.

British Airways is rolling out Wi-Fi on its long-haul fleet, but my 787 was not equipped with it yet.

The crew on this flight operated as one of the best teams I’ve had on BA. It helped make up for the so-so champagne and lukewarm "hot" towel served after takeoff.

Menus offered two starters and four main options for lunch. I opted for the Cajun shrimp and the sausage and mash. Interestingly, the menu followed a Louisiana theme with items like gumbo, a nice touch that you won’t spot on other BA routes. The food was quite reasonable.

I was a bit greedy when it came to cheese and dessert, opting for the cheese plate with a glass of port, followed by the chocolate cake. The cheese was simple fare, just two kinds and three small crackers, while the chocolate was probably the best course out of all four.

The second food service was what BA likes to call afternoon tea: sandwiches, cakes and warm scones. I demurred, as I had awful sandwiches previously. I instead settled down in my fully flat bed and slept right through until an hour prior to landing, after which I was lured in by the idea of a warm scone. If I'd wanted, there were fruits, chocolates, snacks, juices, wine and assorted drinks in the self-service area in the galley.

Sleep made the flight flash by, which is a significant reason I’d splashed out on a Club World seat in the first place. It meant I could land, head out without feeling wrecked, and get to bed at a normal time to beat the jet lag, which was crucial on a three-day trip. I landed in New Orleans at around 7:10pm and was out and into the Crescent City within minutes.

I must say, however, that the 787-8 wasn’t as quiet as many say. It was not nearly as loud as the American Airlines 777 I travelled on from LA to London, for example, but I still heard a whirring hum that was hard to completely ignore (it’s quite considerable in the World Traveller Plus cabin closer to the engines, as I found out upon my return flight).

It was a good flight because I had a lie-flat seat all the way, no need to change airports, and a decent crew that made everything run smoothly. Sure, the current Club World layout is questionable given the stepping-over-feet layout, but if you can ignore that and the terrible sandwiches for afternoon tea, then this flight has got as much going for it as you could want.

Featured image by A wider view of the 2-3-2 Club World cabin arrangement.

Our points-obsessed staff uses a plethora of credit cards on a daily basis. If anyone on our team wouldn’t recommend it to a friend or a family member, we wouldn’t recommend it on The Points Guy either. Our opinions are our own, and have not been reviewed, approved, or endorsed by our advertising partners.
See all best card offers
Related stories
Guide
27 cruise ship embarkation day do’s and don’ts
Guide
IHG food and beverage reward redemptions are coming soon: Here's a sneak peek at how they'll work
News
The final 747: Boeing is set to deliver the last of its iconic jumbo jets today
News
United cuts Iceland route just 3 months before it's supposed to restart