C'est (Almost) Chic: A Review of Air France's 777-300ER in Business From Paris to New York

Articles
Nicky Kelvin is the director of content and face of TPG UK, and is also an award-winning photographer. Before joining TPG UK, he was a record label lawyer and avid traveler sharing points wisdom as the "Miles Mogul."
Follow
Feb. 18, 2019
•
17 min read 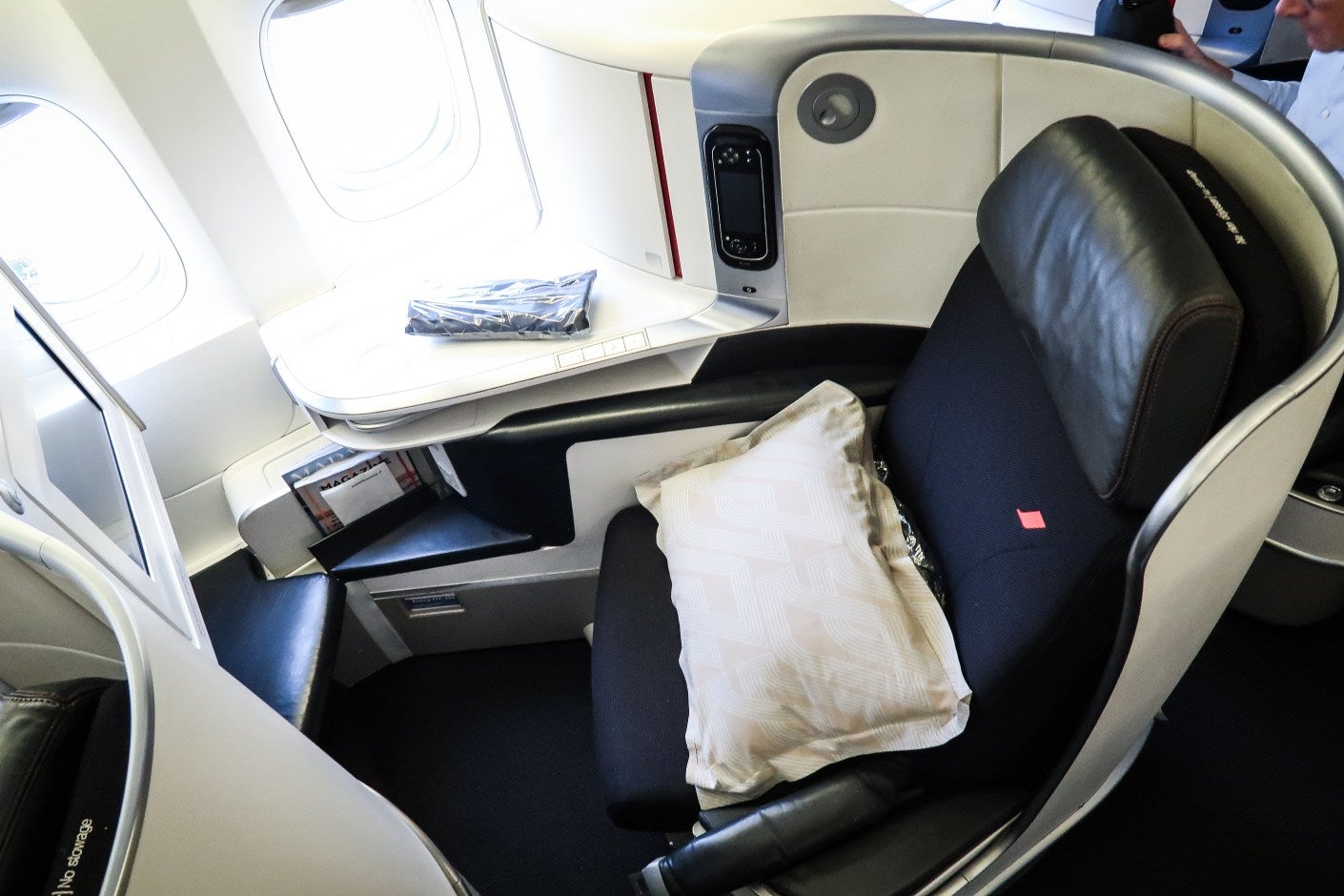 C'est (Almost) Chic: A Review of Air France's 777-300ER in Business From Paris to New York
This post contains references to products from one or more of our advertisers. We may receive compensation when you click on links to those products. Terms apply to the offers listed on this page. For an explanation of our Advertising Policy, visit this page.

With yet another trip to New York to visit TPG's headquarters on the books at the end of last year, I was eager to try crossing the Atlantic from European cities near London, even though it meant adding a connection (and a whole bunch of time) onto the journey. With Paris being one of the closest transatlantic gateways, Air France's business-class product was near the top of my list, especially since its 777-300ERs now feature an updated 1-2-1 reverse-herringbone product in business.

As you can imagine, Air France business-class tickets don't come cheap. With one-way flights regularly costing over $5,000, we turned to points and miles. We ended up booking my one way flight from London Heathrow (LHR) to New York JFK via Paris CDG with 80,500 FlyingBlue miles, transferred at a 1:1 ratio from American Express Membership Rewards, plus an additional $500 in taxes and fees, which we paid for with The Platinum Card® from American Express to take advantage of the card's 5x bonus category on airfare booked directly through the airline.

In total, we "paid" a little over $2,000 (~$1,500 in Amex points, according to TPG's most recent valuations plus the additional $500), which represents a very solid savings over the cash price of a ticket. FlyingBlue miles are quite easy to come by, too, as the program is a 1:1 transfer partner of Chase Ultimate Rewards and Citi ThankYou in addition to Amex.

My travel day began at London's Heathrow airport, where the check-in experience was extremely quick and efficient, with barely any lines.

The flight from LHR to CDG was slightly delayed, and there was a long line at CDG's immigration hall. This meant that there was no way I'd make it landside and back again, so I decided to head straight for the Air France business-class lounge. I was able to use the "Accès No. 1" security area since I was traveling in a premium cabin — I breezed through, passed some swanky French boutiques (think Chanel and Cartier) and headed to the lounge.

I took an elevator stuffed with people down a level to reach the entrance of the lounge in terminal 2E.

The lounge itself is large, with two separate areas (left and right of the front desk). Each side has relatively similar options for seating as well as food and drink offerings.

I visited the lounge in the mid-afternoon, which is a bit of a no-man's-land between lunch and dinner. As a result, the food offerings looked sparse and picked over. The nondescript chicken and scattering of pasta shells were a lowlight, but the selection of cheeses, chocolates, drinks and other snacks were decent.

The lounge boasts a Clarins-branded spa which offered short 20-minute facials that were bookable via iPad, but unfortunately there were no appointments available that worked with my travel schedule.

However, I had sampled a facial at the SkyTeam lounge at Heathrow earlier the same morning. It was also Clarins-branded, and I did enjoy the treatment there. If you can find an appointment that works with your schedule, it's definitely worth booking, though I don't know if I'd recommend going out of your way to arrive at the lounge early to secure a slot.

We boarded our Boeing 777-300ER, which was delivered new to Air France in 2006, through gate K43, and gate agents enforced the zone-boarding policy. I boarded with zone 2, and there were plenty of people ahead of me both in my own zone and in zone 1.

There were two jet bridges connected to doors 1L and 2L, with 1L being used to board the first-class cabin (La Premiere) only.

It was a short taxi to the runway, and we were treated to spectacular sunset views on our departure.

Business class on this aircraft was arranged in a 1-2-1 reverse-herringbone configuration and spread over two separate cabins. My seat, 5L, was a window seat located in the middle of the smaller, forward business-class cabin. All business-class seats in this configuration have direct aisle access, which means no mid-flight hops over your neighbor's legs!

I liked that a hanger was left on the seat with a ticket on it, so that a coat could be quickly hung up. Although, at one point I tried to hand my coat over to the crew, and they reacted as if I wasn't meant to be in business class. They proceeded to talk in front of my face in French to discuss the situation amongst themselves. Perhaps my New York Bagels sweatshirt wasn't chic enough for them?

I tend to prefer a mini-cabin, as it usually feels a little more exclusive and quiet. It felt open and spacious, too, with just 16 seats.

I took a walk through the larger business-class cabin behind me, and it definitely felt more packed, with 42 seats. Generally, though, both cabins were light, airy, and spacious with muted tones, adding to the chic tone that Air France strives for, especially in its premium cabins.

I found the Zodiac Cirrus reverse herringbone seat itself to be a little short -- I felt that I was sitting too far forward without enough depth on the bottom of the seat. And, the pillow was too large for general use outside of sleeping -- a second, smaller pillow would have been very welcome.

However, there was plenty of foot space, and the seat was overall quite comfortable.

I liked having a mirror in the small storage cabinet at the seat, and the space itself was just the right size to keep all the bits I wanted to have on hand during the flight.

An AC power outlet and a good sized table — more than sufficient for a 15” laptop — were good features, and made working easy.

The seat was OK for sleeping, but the lack of decent linen, plus no mattress pad or sheet, were a factor. But as this was a relatively short day flight, it didn’t matter all that much. I reclined to the fully flat position for a little bit while watching a movie, but that was it.

I just had to have a quick peek at the first-class cabin through the curtains at the very front of the cabin, and found myself pining for this to be my seat for the journey across the Atlantic. But, for now, La Premiere remains firmly on the bucket list!

The amenity kit contained the usual components including a Clarins moisturizer and eye cream. But, as a collector of amenity kits, the actual bag itself — a scarlet red AF-branded pouch — was tacky and felt cheap.

Besides the aforementioned hanger, I also had a pair of slippers waiting for me at my seat, which were nice to have for moving about the cabin.

There was a decent selection of movies on the IFE, but the system itself was confusing. There wasn't a way to easily filter English films, as it still showed French films (which may have been dubbed).

I spent some time browsing the in-flight map, which I always enjoy doing as an #AvGeek.

Unfortunately, the aircraft did not have working Wi-Fi, a real letdown for anyone hoping to get work done on the daytime flight.

At boarding, there were bottles of Evian still water at each seat, and the full meal service began shortly after takeoff.

I asked for a glass of the Languedoc Blanc white wine to accompany the amuse bouche, which was a smoked scallop and vanilla-scented parsnip puree. It was tasty, but the cheap plastic spoon it came with couldn't cut through the scallop, which didn't set things off on a very premium note. I couldn’t see a reason the airline wouldn't have provided real metal cutlery for this dish.

The appetizer course included foie gras, smoked salmon with a tarragon cream and a salad. With the ethics of foie gras aside, I enjoyed it a lot.

There were four options for the main course:

I ordered the lamb shoulder, which I found to be delicious — the lamb was tender and phenomenally tasty.

Desserts and digestifs were served from a trolley, which harkened back to the golden age of travel. I really do appreciate when airlines serve meals like this. I gladly took a little bit of all three of the dessert offerings, along with a mint tea. The crew’s recommendation of the ginger bread sorbet was indeed excellent. After the full dinner service was completed, the crew brought around a basket of candies, chocolates and cookies.

There was a nice selection of snacks set up in the galley between the two business cabins.

I helped myself to some delicious chocolates and shortbread during the flight.

For the pre-landing meal, I chose the chicken and mushroom "flan," which was OK, but not the same quality as the previous meal. The cappuccino, while certainly hard to get right on a plane, was very disappointing.

Like I mentioned earlier, the crew was frosty at the start; I initially felt as if they didn't think I belonged in the business-class cabin. But, they warmed up as the flight went on, and I couldn’t actually fault them on anything specific.

It wasn't the warmest service I've received in a premium cabin, but the crew was fast and efficient and I was not left wanting for anything. I'm usually one who makes friends with the crew, and perhaps this time a language and culture barrier impeded me on my quest, but overall I don't have a negative impression of the crew.

Charles de Gaulle was an easy airport to navigate (despite its reputation as the opposite), the lounge was solid, and the Air France onboard experience good, but not magical in terms of both hard and soft product. Service was bordering on lackluster, but not enough to make the experience a negative one. I'd say that Air France certainly remains a good option for crossing the Atlantic from Europe. With the right redemption, it may even be worth the trip over to Paris from other points in Europe to try this one out for yourself.