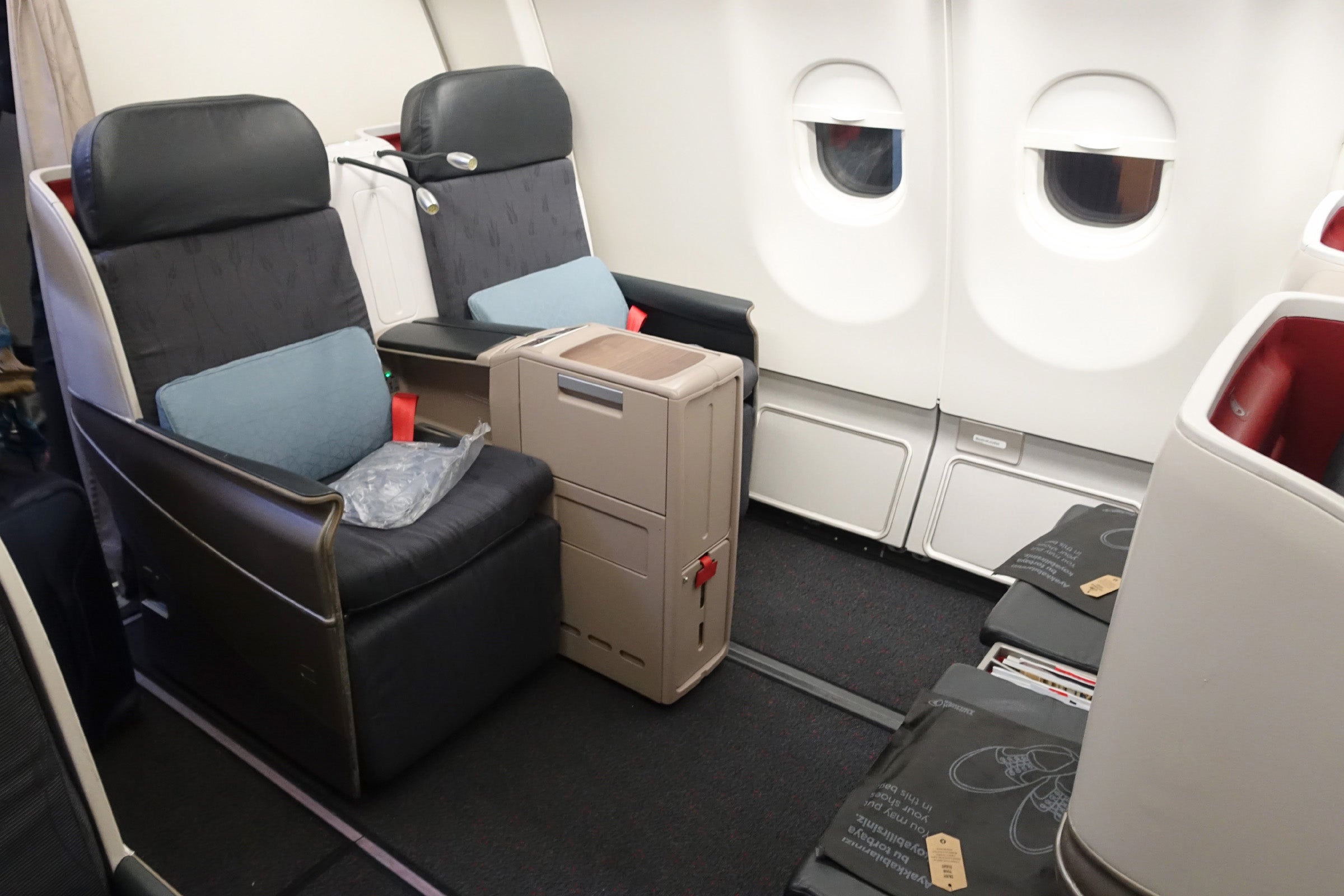 After a great flight on Turkish's 777-300ER from Dubai (DXB), a spectacular two-night stay in Istanbul and an extended visit to Turkish's top-notch business-class lounge at IST, it was time to complete my itinerary with a trip on the other wide-body jet Turkish operates on flights to and from the US, the Airbus A330-300.

I booked this flight alongside my 777 leg from Dubai to Istanbul (IST) for a total of $2,800, which, while more than I'd normally like to spend, was one of the least-expensive business-class options following the popular Dubai Air Show.

Unfortunately award space never opened up, even though I searched for business awards daily. However, I did earn 6,270 redeemable MileagePlus miles for this leg of the trip — and you can see the complete haul detailed here.

Even though my flight wasn't scheduled to depart until 8:15am, I arrived at IST a bit before 5:00am so I'd have plenty of time to explore the gigantic business-class lounge. Check-in was painless, and I was through security and immigration and on my way to the lounge in about 10 minutes.

The lounge is so sprawling and amenity-packed that I decided to break it out in a separate review, which you can see here.

In short, I enjoyed my visit, but the space became uncomfortably crowded by the time I headed to the gate around 7:00am.

Seats are arranged in a 2-2-2 configuration, which I prefer to the 2-3-2 you'll find on the 777. Since the A330 cabin is narrower, however, the seats measure 21 inches on this plane, compared to 22 inches on the larger Boeing jet. I didn't notice much of a difference, though.

I selected seat 5B, located on the aisle in the last row of business class.

As you can see, these A330 seats are even more dated than those I had on the 777 flight — and those were already a step below the industry-standard 1-2-1 arrangement.

There were two lavatories assigned to the business cabin — one up front, near the cockpit, and another near the second door, on the port side of the plane.

Both lavs were especially basic and compact. If you're planning to change, you might want to do so before and after the flight — I really struggled to change into my pajama pants on the plane.

Right away I noticed that these seats offered less privacy than those on the 777, as they're lacking a center divider. That turned out to be a non-issue, since I loved my seatmate, and friends or family members sitting together shouldn't mind. If you're next to an unfriendly stranger the lack of privacy is from from ideal, though.

Otherwise, the seats themselves were nearly identical to those on the 777.

I also appreciated having a small storage nook between the TVs, which isn't available on the 777. I found the storage otherwise inadequate, though.

My seat had the same controls I had on the 777, which meant it was equally challenging to get it into the ideal position — moving to full-flat mode was a cinch, though.

The seat was comfortable in lie-flat mode, though again the lack of privacy might make it challenging to get comfy.

As I mentioned, having a great seatmate made all the difference here.

We chatted off and on throughout the flight using Google Translate, powered by the (generally sluggish) Wi-Fi.

The amenity kit was a bit more comprehensive on this leg, and included a dental kit, disposable socks, a shoehorn, brush, eye mask, earplugs and lotion.

The bedding was also a nice treat — a flight attendant came by offering mattress pads shortly after takeoff, and he patiently installed them at each seat. The pillow and blanket were solid as well.

I also liked these noise-canceling headphones better than those on the shorter flight from Dubai, so I ended up using them throughout the flight.

The Wi-Fi was too slow to get much work done, unfortunately, but at $14.99 for the entire flight, it was entirely affordable.

The entertainment selection was very good on this leg as well, with the same selection of films and TV shows. The 777 offers a larger display, but I got used to the smaller screen quickly enough.There was a decent mix of new releases, older flicks and Turkish films. I really liked that the IFE system included IMDB ratings, too, since I'd otherwise have had to look those up using the Wi-Fi.

Again, content can be selected using the touchscreen or the (in this case not-quite-up-to-date) wired remote.

There was also an option to view a live camera feed, but I couldn't get it to work at any point during the flight.

Of course, the entertainment didn't stop at the IFE screen...

Turkish offers some of the best business-class catering in the world, thanks to its partnership with Do & Co. I was even impressed with the menu, which the onboard chef delivered to everyone herself.Since this was a morning flight, a flight attendant came by with a mix of breakfast-appropriate beverages before we left the gate.

I had the limonata again, since I liked that so much on the flight from Dubai. Then, about an hour after takeoff the first breakfast course was served. The menu included an order form with checkboxes, but a flight attendant took our order verbally.

First up was a selection of appetizers, including a mix of turkey and cheese, a fruit salad, small vegetable salad, honeycomb, butter and a tomato spread with walnuts.

We were offered warm bread moments later as well.

I was a bit surprised to find dirty silverware when I opened up my napkin, though. It wasn't a big deal since I had a second knife, but I would have expected a bit more attention to detail at Turkish's main catering facility.

There was a hot entree as well — I went with the Gozleme pastry, which was fantastic.

Then, after the first meal a flight attendant set up a snack bar at the front of the cabin, just ahead of seats 1D and E. This was actually a high-traffic area throughout the flight, so I'd avoid picking a seat in row 1 if you can help it. My seat in row 5 was also a bit too noisy, with a lot of activity in the galley just behind.

The crew turned the lights on about three hours before landing, and a few minutes later I was offered my choice of beverage with a bowl of nuts.

Then, 30 minutes after that a flight attendant came through to set up the tables for the pre-arrival meal, which actually turned out to be more substantial than the breakfast.

Turkish sets up a small LED light on each tray on longer flights, which, while entirely unnecessary, seemed to be a nice touch.

Five minutes later I was offered my choice of appetizer — since I was the last to be served and there were plenty left on the cart, I asked for both.

The presentation was excellent here — aside from the silverware issue at breakfast.

I was offered a main course just 15 minutes later, and went with the swordfish, which was surprisingly moist and well-prepared.

About 90 minutes after the second meal service began, it was time for dessert. I asked for the chocolate mousse and panna cotta, which were both very good.

Finally, I ended the meal with a delicious Turkish coffee.

Aside from the excellent service and my phenomenal seatmate, the amazing Do & Co catering was, without a doubt, the highlight of this flight. There was plenty of food, and it was some of the best I've had in business class.

Overall, I was underwhelmed by Turkish's cabin and seat in general. I wasn't expecting much, given the 2-2-2 configuration, but this product was among the least private I've experienced in biz — and on such an otherwise excellent airline, the lack of privacy was a real letdown. That said, while I wouldn't necessarily go out of my way to fly Turkish's A330 again, I did have a better experience with the 777 hard product, and I'm sure I'll be back on Turkish sooner than later.