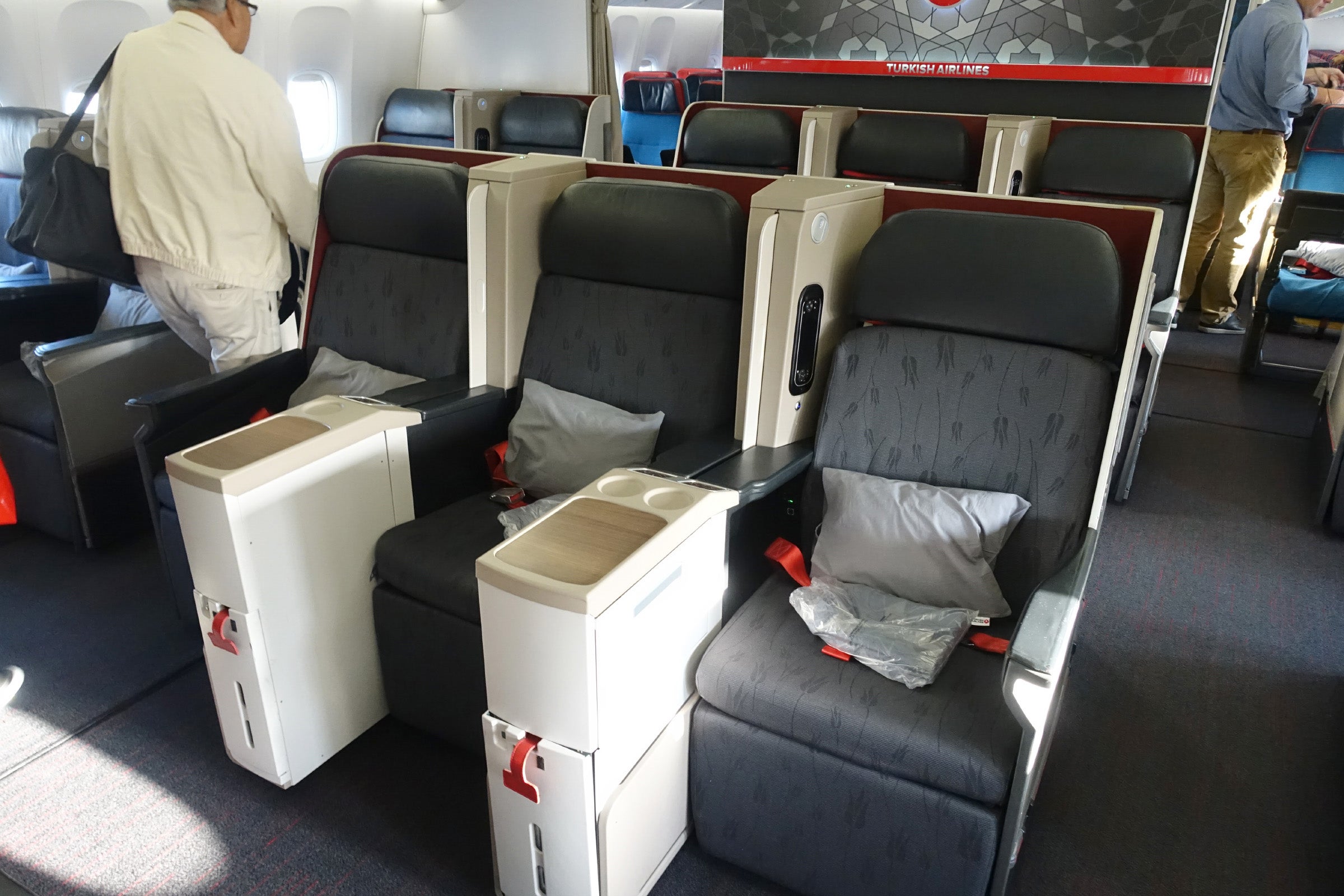 There are a lot of Star Alliance members, enough that I don't expect to ever fly all 28, but one glaring omission for me had been Turkish Airlines, which I'd heard great things about over the years. Turkish often offers excellent business-class award availability, to boot, though sadly there weren't any seats open on flights that could get me home after the Dubai Air Show.

There was another wrinkle I ended up having to deal with: The plan was to fly to Istanbul Atatürk Airport (IST), but a few days after I booked, Turkey suspended visa services for US passport holders. At the time, I figured the situation could change between then and my flight in mid-November, and even though it didn't, I was still able to cross the border into Turkey. Now, as of this writing, the visa ban has been lifted entirely.

Given that there weren't award seats on the flights I needed, we booked a fully refundable one-way ticket for $2,800, and I checked back often to see if awards became available. They never did, and ultimately both of my flights went out full. We decided to keep the paid booking, given that there weren't suitable award alternatives and that I'd have an opportunity to review both the 777-300ER and A330-300, the two wide-body planes Turkish flies to and from the US.

We booked the flight through Amex Travel and paid with The Platinum Card® from American Express, earning 5x points for a grand total of 14,000 Membership Rewards points.

I earned 2,338 miles for this five-hour hop to Istanbul and 6,270 miles for my onward flight to New York-JFK, which I credited to United MileagePlus, my primary Star Alliance program. I also earned a grand total of 6,886 Premier-Qualifying Miles, which helped me reach the next upgrade threshold, earning me two more Global Premier Upgrades and another two Regional Premier Upgrades. So, in the end, that was a pretty solid haul.

Once Amex issued my ticket, I was able to head over to Turkish's site to select my seats. There weren't many left to choose from even several weeks before departure, but I settled on 7B, an aisle seat in the last row of the business-class cabin.

I left my hotel a bit earlier than I otherwise would have, arriving at Dubai International Airport (DXB) around 6:00am. I figured that I might have difficulty checking in, given the visa ban, but the computer spat out my boarding pass without the agent verifying that I was eligible for entry into Turkey. I was a bit concerned, given that I had a two-day stopover in Turkey, but I assumed I'd be in the clear if I managed to make it to the airport in Istanbul. Things were certainly off to a good start.

While Emirates and Qantas flights depart from the arguably more appealing Terminal 3, most other international carriers operate in and out of Terminal 1. There wasn't much of a queue at security or passport control, so I was through to the intra-terminal train in just a few minutes. From there, I arrived at the main terminal area, which was similarly empty.

As a business-class passenger, I was eligible for entry to the Marhaba Lounge (also accessible to Priority Pass members). So regardless of which airline I was flying, I could have gotten in thanks to my Chase Sapphire Reserve card, along with a handful of others.

Like the rest of the terminal, the lounge was fairly empty, perhaps because of the early hour.

The main dining area was by far the busiest section, but even there I had my choice of a half dozen or so tables.

I knew I'd soon be enjoying phenomenal Turkish Airlines Do & Co catering, so I didn't stuff myself in the lounge, even though there were a handful of appealing options.

In addition to salads and hummus, there were sandwiches and hot breakfast items like eggs and chicken sausage.

Since I wasn't eating, I decided to catch up on work instead — this lounge had easily some of the speediest Wi-Fi I'd ever come across in an airport.

I made my way to the departure gate an hour or so before our flight time and hopped in the queue, since I wanted to be first on board to snap shots of the empty cabin.Turkish's 777-300ERs offer 49 seats between two cabins — mine was in the smaller cabin just in front of economy. All seats were 22 inches wide with 78 inches of pitch, and they were completely lie-flat, of course.

Seats on this plane were arranged in a 2-3-2 configuration, which really bummed me out — the airline took an otherwise top-notch business class and added middle seats. Grrrrrr.

On top of that, there wasn't a ton of privacy — you could easily see your cabinmates throughout the flight.

There were a total of two business-class lavatories, located between the two cabins.

While small, the lavs were clean and fresh.

I also took note of the faux airplane window — it obviously wasn't the same as the real thing, but I appreciated the attempt.

My aisle seat was fairly exposed — in the future, I might opt for the window, instead, especially given that there was enough pitch to get in and out without too much effort.

Turkish operates two versions of the 777-300ER; fortunately, I ended up with the newer of the two, which meant more modern finishes and a higher-end in-flight entertainment system.

I found there to be a decent amount of in-seat storage — the pocket to the side of the seat was roomy enough for a water bottle and smaller electronics, and I managed to squeeze my backpack into the large compartment under the ottoman above.

The seat controls were fairly basic, and I had trouble getting it into the reclining position I was aiming for. I ended up pressing the bed button until I was at the halfway point and leaving it there for most of the flight.

The seat was pretty comfy as a bed, but again I felt pretty exposed to the rest of the cabin.

Waiting at my seat was a pair of slippers, plus a very basic amenity kit. To be honest, I wasn't expecting anything at all on a flight this short, so the dental kit, eye mask, ear plugs and socks were more than sufficient.

While hardly the largest I'd seen in biz, this newer version of Turkish's 777 sported up-to-date high-res displays.

You could select content using the wired remote or directly on the screen, though it was a bit far from the seat, so I made my picks using the remote instead.

There was a decent selection to choose from, including top Hollywood flicks and international films.

There was also a forward-facing camera, which are far less common on 777s than they are on more modern planes such as the Airbus A350.

Turkish Airlines is renowned for its catering, which is provided by Vienna-based Do & Co. Everything was a step above what you'd find on most competitors, with exceptional attention to detail — the swizzle sticks included with the welcome drinks also identified the beverages, for example. I went with the limonata, which tasted more or less like regular lemonade, but with a lemon slice and mint as a welcome flourish.

Turkish staffs onboard chefs who are exclusively responsible for food and beverage prep. Even our short flight from Dubai had a dedicated chef.

The menu and accompanying beverage card had a slick design.

Since this was a morning flight, breakfast was served. It was still a multi-course affair, though — first up was a small vegetable-and-cheese spread, which was served with fresh fruit, olives, honeycomb and butter.

I was a big fan of the honeycomb and the cute salt and pepper shakers.

There was also a selection of warm bread, which was served from the basket.

I requested a glass of water and the ayran, a Turkish yogurt drink, which was tasty.

Ordinarily, that would have been enough food for me, but there was still a hot entree to come.

My choices were a cheese omelette with spinach and potatoes, or a Turkish cheese pastry with mushrooms and red pepper. I opted for the latter, which was absolutely delicious.

I really enjoyed my first flight on Turkish Airlines, and while visa restrictions at the time could have soured my experience overall, I was able to enter Istanbul without too much hassle.

While I definitely think Turkish needs to ditch its high-density 2-3-2 configuration, this is a decent product as long as you don't end up in the middle — in fact, with the exception of my solo Cathay Pacific hop to Sri Lanka, I can't remember a four-hour flight more satisfying than this.

I wouldn't go out of my way to fly Turkish to Western Europe, but for flights to the Middle East or perhaps even Asia, and with the right fare or award availability, I wouldn't hesitate to try the airline again.