Flight review: Fiji Airways economy class from Nadi to Los Angeles on the A350

Articles
Chris Dong was a reporter at The Points Guy, where he covered the intersection of credit card rewards and travel.
July 10, 2020
•
15 min read 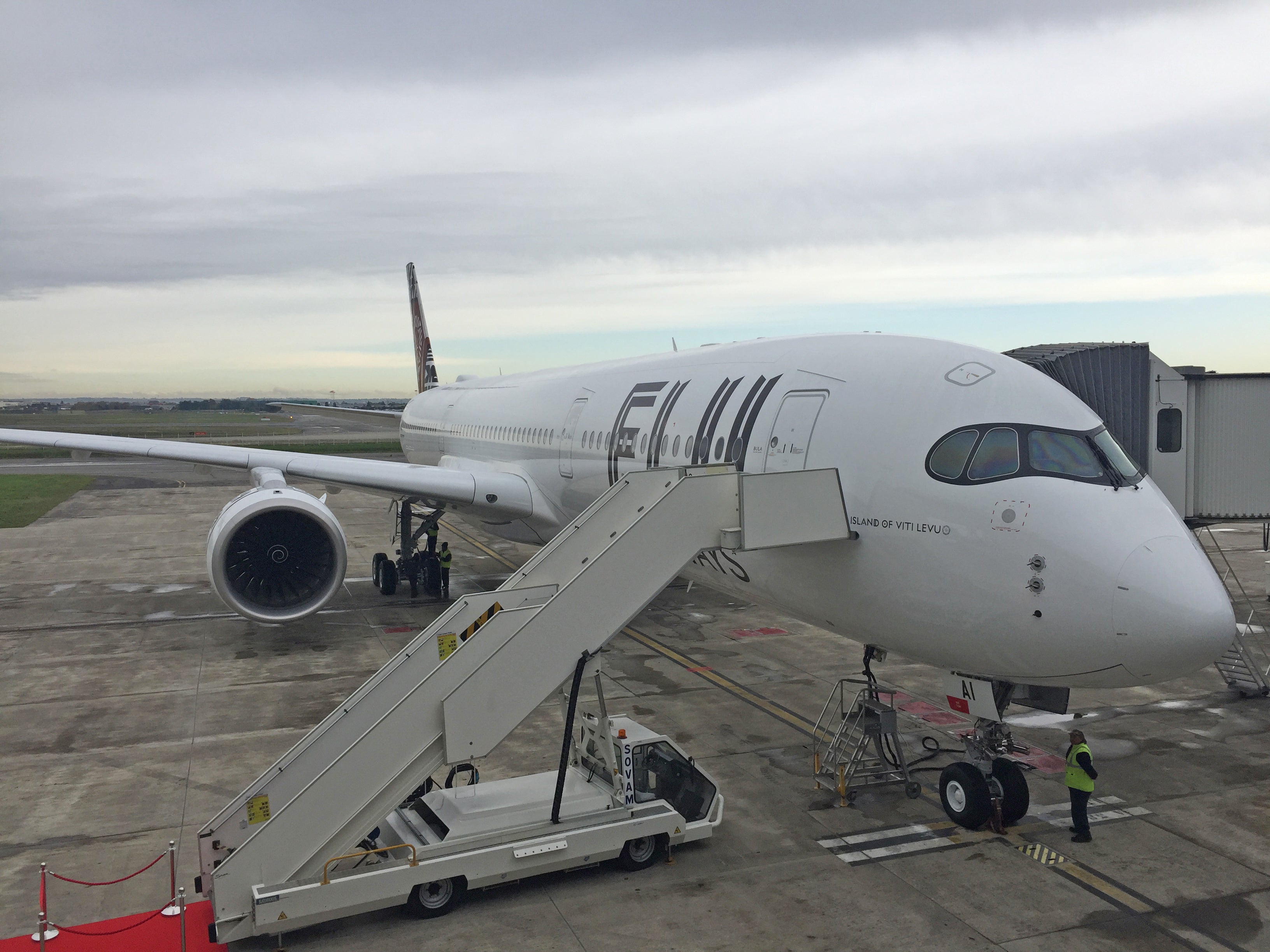 During the COVID-19 crisis, our team has temporarily ceased taking review trips. However, we are publishing new reviews, from trips taken before the lockdown, like this one, which happened in March. Fiji Airways has completely suspended all international flying through the end of July 2020. This route, from Nadi to Los Angeles, is tentatively scheduled to restart on Sept. 1, 2020.

Bear in mind that for the foreseeable future the onboard and ground experiences — with lounges closed or without food and amenities — will be very different from what was available before the pandemic.

In the days leading up to global travel restrictions, I made the journey home from Nadi in Fiji to Los Angeles on Fiji Airways' new Airbus A350. In fact, I documented my adventure entering the US in mid-March in the midst of the pandemic. Now, it's time for a rundown of the pre-flight and in-flight experience from my last international flight for the foreseeable future.

Fiji Airways has just two Airbus A350-900s, the first of which was delivered in November 2019. Before the pandemic, they were deployed on flagship routes to and from Nadi (NAN), the biggest Fijian airport, to Los Angeles (LAX) and Sydney (SYD).

I rode in an extra-legroom economy seat, which Fiji Airways calls "Bula Space" after the traditional Fijian salutation, “Bula!”

Here's what it was like to fly Fiji Airways.

Thanks to an incredible deal with Alaska Airlines' Mileage Plan program, I booked my one-way economy flight on Fiji Airways for just 20,000 Alaska miles and $150 in taxes and fees. (Fiji Airways is a partner airline of Alaska.)

Even better, Alaska allows one free stopover on award tickets, which meant I could fly from elsewhere in the South Pacific, hang out for a few days in Fiji, and continue onwards to the US for the same number of miles. And that is exactly what I did.

My routing took me in economy class from Sydney to Fiji to Los Angeles — two flights totaling nearly 7,500 miles — for just 20,000 Alaska miles. That's a steal in my book.

I took a taxi from my hotel, the Hilton Fiji Beach Resort, to the international terminal of Nadi Airport. Upon arriving, I appreciated the open, modern layout of the terminal and just how easy it was to reach the check-in counters. I had already checked in online and could get a mobile boarding pass, but I also always make a point to get a physical boarding pass for memories' sake.

Related reading: How to plan a trip to Fiji on a budget

Near the check-in area were health warnings related to the coronavirus, but few people were wearing masks in early March.

I arrived about three hours before a scheduled departure of 9:40 P.M local time, and there were about 10 people in line at the economy check-in counters, but no one queued up at the business class-only "Premier" line. Next to the Premier line was a dedicated Priority line for Oneworld elites. Fiji Airways is a Oneworld Connect member airline and recognizes elite status for priority check-in.

Thanks to my Oneworld Emerald status, I breezed through the check-in area in just a few minutes.

After quickly whisking through security and passport control, I made my way to the Fiji Airways Premier Lounge. The lounge is a bit tucked away, but there's clear signage. After security formalities, turn right, walk to the end of the room and go left — you’ll find it down the corridor.

The Premier Lounge is open to business-class passengers as well as select Oneworld Sapphire and Emerald elites — American Airlines Oneworld elites, like myself, are excluded. Unfortunately, this is one of the quirks of Fiji Airways being a partial Oneworld "Connect" member and not a full-fledged Oneworld airline.

However, it's a moot point anyway because a lot of flyers have access to the Premier Lounge; it's a Priority Pass lounge.

The Fiji Airways lounge was refurbished in 2018 with new, distinct zones for work, entertainment, and dining. The green, living wall and contemporary decor vaguely reminded me of American Express's popular Centurion Lounges.

There were plenty of different seating arrangements and a spacious dining area complete with a full (and pretty tasty) buffet. Bonus points for the hand-crafted barista coffee, two spacious shower suites, and power outlets galore. I was also impressed with the table service; servers frequently asked if I needed a refill.

On the downside, there are no windows in the lounge which makes for a dark, dungeon-like feel. It also got quite crowded before the LAX flight. Keep in mind, this was at the onset of the pandemic when social distancing wasn't yet a thing. Also, in the future, expect lounge buffets to never look the same.

Outside of the lounge, the rest of the small international terminal area was pleasant with several eateries and comfortable, padded seating throughout. All eight gates shared the same amenities; there was a Burger King and cafe landside, along with more restaurants and a couple of duty-free shops airside.

Boarding commenced a few minutes behind schedule with passengers needing extra assistance at the front of the line, followed by business class, Oneworld elites and "Bula Space" passengers. Unfortunately, the boarding area didn't have any windows for spotting my A350 in Fiji Airways' gorgeous livery, but I snapped a shot on the jetway.

In the back of this A350-900, I was seated at bulkhead 51G in the second of two economy-class sections.

Fiji Airways has a 3-3-3 configuration in economy with a total of 39 extra-legroom seats and 262 standard seats.

I paid an extra $99 for the bulkhead aisle seat. However, my preferred economy seat would actually be 52A or 52K since these give you the best of both worlds: window seats that you can exit without having to interrupt your fellow seatmates.

The overnight flight was very full, with all seats filled in business and near capacity in economy. I spoke with several passengers who decided to fly out early, and cut short their Fijian vacations with news of travel restrictions and country closures starting. (In retrospect, this was likely a smart move.)

The fabric, slimline seat was well-padded for the nine-ish hour flight to LAX. With individual A/C vents and a multi-adjustable headrest with winged sides, this was one of the most comfortable seats you can get in economy.

Waiting at my seat was a small, but firm pillow, thin blanket and headphones that were nothing special.

At bulkhead seats like mine, a 10" screen could be swiveled out from inside the seat housing. There was a responsive touchscreen interface with one of the best features of A350 aircraft — two high-resolution exterior cameras.

The entertainment selection wasn't vast but was solid for a shorter, overnight flight. There were a total of 32 movies, 45 television shows, and 10 games. Most of the movies and shows were recent releases, but the TV series primarily had random, one-off episodes. However, I was impressed that there weren't any ads that you had to deal with before watching your selected entertainment.

There was also a duty-free selection (sadly no A350 model airplanes) and an in-flight magazine that you could access through the screen.

With a blocked flight time of 9 hours and 55 minutes, this was a relatively short transpacific journey. I was exhausted and was hoping for a quick meal service before hitting the hay. Thankfully, my wish was granted with dinner service served shortly after reaching cruising altitude.

There were no menus, but the flight attendant offered either a vegetarian curry or chicken stir-fry option. I chose the chicken which was spicy, flavorful but very small. A sad, stale bread roll and packaged fruit bar (which reminded me of a Fig Newton bar) accompanied the meal.

After the main meal service, the crew came by with trolleys twice more, once for a full bar service and then again for tea or coffee.

A full three hours before landing — a bit early, in my opinion — the entire cabin was woken up for breakfast with a choice of either a vegetarian burrito or eggs with chicken sausage (my choice). Unfortunately, I was so hungry from the small dinner earlier that I forgot to snap a photo before devouring every bite. It was good, by airplane-egg standards.

Before departing Nadi, interestingly, there was no inflight safety video even though each seat had screens. It was manually done with an automated audio recording.

The cabin crew all wore masks throughout the flight, from boarding to deplaning. Towards the end of the flight, the cabin crew also gave each passenger a health form to fill out that asked several questions about your health along with “yes” or “no” questions about any recent travel to several “higher risk” countries. (Note this was before the huge wave of cases in the US.)

Overall, the flight attendants I interacted with all performed their duties well, but annoyingly, were chatting with several regular passengers (or airline personnel) in the row behind me which disrupted my sleep from time to time.

However, whenever I needed something, the crew were quick to fulfill the request including my flight attendant call button request for water in the middle of the night. Overall, service was average, not particularly warm or friendly, but it did the job. My only notable complaint was the mid-flight chitchat.

While lockdowns were beginning to be implemented left and right, I was flying home to beat the clock. Thankfully, I made it home in one piece and managed to fly a new product to boot (A350 flights to LAX launched on Jan. 1, 2020). Even better, I saved a whole lot of miles.

If the price (or miles) is right, it makes all the sense in the world to fly in economy, even for a longer flight. 20,000 Alaska miles for two medium- to long-haul flights is a great deal, no matter what class of service it happens to be,

I left New York less than 2 weeks ago closely monitoring but not overly concerned with the outbreak. Clearly, things have changed drastically—and continue to shift hour by hour. I’ll be using my last hours in Fiji to mentally unwind knowing that through it all, we’ll just have to keep paddling on.

Related reading: What it's like landing at LAX during a pandemic

Without a doubt, flying will forever change because of the coronavirus pandemic. This is a glimpse into what an international economy flight was like at the very early stages of the crisis. For the latest country-by-country travel restriction information, follow our guide.

All photos by the author except where noted. Featured photo by Miquel Ros/The Points Guy.