Articles
Ethan Steinberg has been a frequent flier for as long as he can remember. He went from studying abroad in Paris to moving to Shanghai after graduating college, where he covered all things travel in the Asia-Pacific region for TPG.
Sept. 03, 2018
•
7 min read 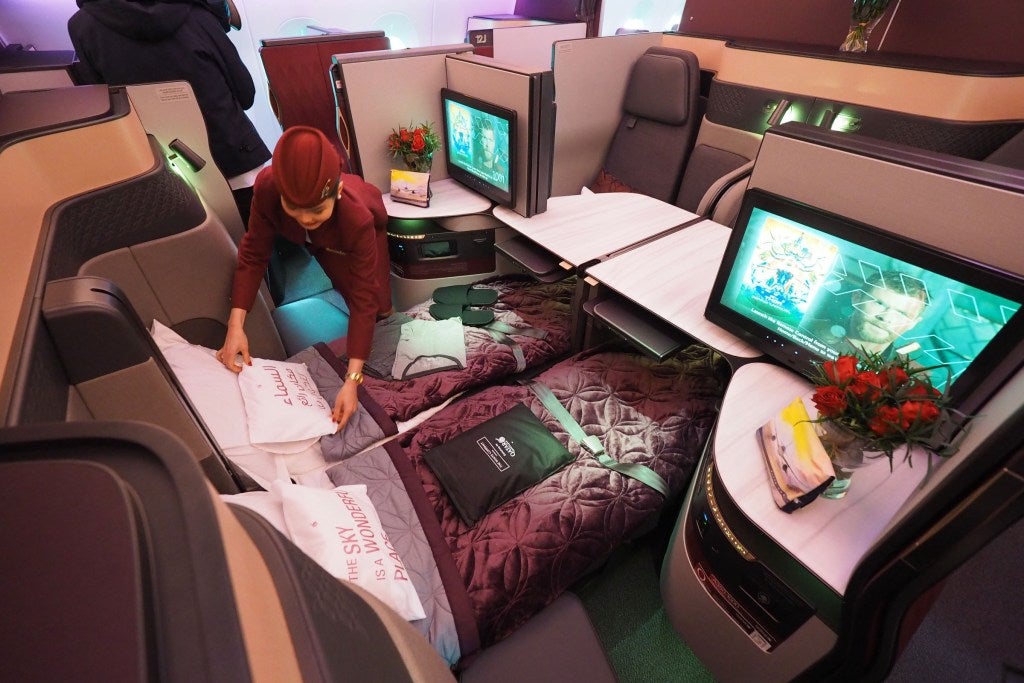 While the A350-900 has been in service for a few years now, Qatar recently took delivery of the world's first A350-1000, and you'll be happy to know that it comes installed with its industry leading Qsuite business-class product. These seats have raised the bar when it comes to international business class. They feature everything from sliding doors to center seats that can form a double bed — some center seats can even be made into a quad "bed." The best place to experience the carrier's best business-class seat is on its newest aircraft, the A350-1000. It's full of next generation technology that allows for lower altitude pressurization, higher humidity, and great mood lighting that helps reduce the effects of jet lag. The lack of overhead bins in the center section gives the cabin an open and airy feeling, while the quiet engines make it even more comfortable to fly.

When Qatar took delivery of the first A350-1000, it also received an A350-900 featuring Qsuites (most of the other -900s have a different business-class product), which is currently flying to London. The airline has another 18 A350-900s on order, all of which should be delivered with the new Qsuites.

If you can't wait for the A350-1000s to start flying (regularly) to the US, Qatar's retrofitted 777s give you another opportunity to fly what TPG editor-at-large Zach Honig calls "the world's best business class." He was especially impressed by how high-tech the seat was, including all the things you never knew you needed in the air (like an HDMI port). The first planes to be retrofitted with Qsuites were all 777-300ERs, but Qatar's first 777-200LR with the new seats began service to Houston (IAH) earlier this summer. Given that only a small number of 777s have been outfitted with Qsuites, you'll want to check the seat map of your specific flight before you book.

If you'd asked me a year ago I would've said that Qatar's A350-900s and 787s (which feature identical seats, although the A350 has more seats in the cabin) are some of the best business class seats in the sky, but nothing can truly compare to Qsuites. TPG's JT Genter reviewed the A350-900 last year, and was really impressed with the sleek cabin design. The walk-up bar (shown above) that separates the main cabin from the mini-cabin behind it further adds to the A350s open and airy feeling, but also exacerbates JT's biggest complaint: the lack of privacy at each seat. Not only do they not have closing doors like the, but the seats themselves are relatively exposed. Qatar does plan to retrofit these aircraft with Qsuites eventually, but given how new they are it could be years before we see that process completed begun.

Qatar only has nine A380s in its fleet, a far cry its neighbor in the Gulf and competitor Emirates, which has over 100 of the double-decker superjumbos. Unfortunately, none of these fly to the US, so if you're one of those weirdos who wants to fly every single A380 in the sky (like I am), you'll have to do so on a trip to Europe (London and Paris), Asia (Bangkok and Guangzhou), or Australia (Sydney and Melbourne). Qatar's A380 features the exact same reverse herringbone seat as the A350-900 and 787, including the same width and pitch, so why does it rank lower on the list? As TPG contributor Eric Rosen found when he flew the A380 from Doha (DOH) to Paris (CDG), the larger business class cabin (48 seats vs. 36 on the A350-900 and 22 on the 787) resulted in markedly poorer service. Qatar offers dine-on-demand, even on a relatively short seven-hour hop to Paris, and delivering a customized meal service for every passenger means service takes longer and can be less attentive. Plus, the fact that this aircraft is not on any of Qatar's US routes means you'll have to go out of your way to find it.

The A380 is also the only plane in Qatar's fleet to feature a true first class cabin, as well as an on-board bar. If you're prepared to deal with a slower meal service that tradeoff could make it worthwhile to pick the A380.

Where they fly: LAX, DFW

Despite the variety of planes in Qatar's fleet, the business-class seats can essentially be split into 3 groups: Shiny new Qsuites, comfortable reverse herringbone seats and... everything else. The rest of Qatar's fleet — 777s that haven't been retrofitted with Qsuites, Airbus A330s and A340s — all feature a 2-2-2 business class configuration. This can be perfectly fine for a short flight from Doha to Africa, but if you're traveling next to a stranger I'd avoid this configuration on longer flights, like the 16-hour journey from Doha (DOH) to Los Angeles (LAX). Remember, though, that even if you're on an older plane with subpar seats you'll still get to enjoy the same soft product (food, lounge, and service) as those flying in Qsuites.

US-based travelers should consider themselves lucky. Since Houston got its Qsuite upgrade, the only destinations in the US that are still served by the old 2-2-2 configuration are LAX and Dallas/Fort Worth. While you shouldn't hesitate to book if you can find Qsuite award space, the A350-900 and 787 are solid options as well and among the most comfortable ways to get to the Middle East and beyond on points and miles.