Articles
Kaeli Conforti is a digital nomad and has been backpacking solo around Southeast Asia, Australia and New Zealand since January 2018. She loves inspiring others to travel the world and create their own adventures.
Follow
June 30, 2019
•
8 min read 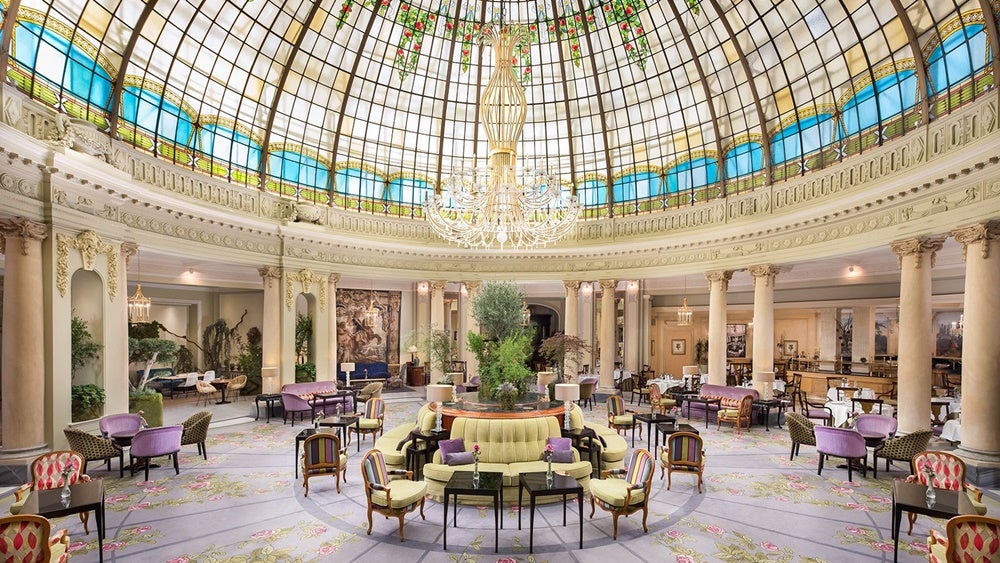 We recently asked our TPG Lounge members to share their all-time favorite points hotels in Europe. Here’s a look at some of our favorite answers. (Some responses have been lightly edited for style and clarity).

From beautiful resorts in the Greek Islands to rooms with castle views in Edinburgh, our TPG Lounge audience has definitely had some great points hotel redemptions at Marriott properties throughout Europe.

"Blue Palace, a Luxury Collection Resort and Spa, in Crete. Tremendous views and a funicular to the beach!" — Aaron J.A.

"Sheraton Grand Hotel & Spa, Edinburgh. Incredible castle views, great rooms, dining options in the hotel, access to a beautiful spa facility and a really nice lounge with breakfast and daily happy hours. I recommend it to all my Marriott friends who are heading to Edinburgh." — Kevin M.

"Sheraton Dubrovnik Riviera Hotel, a new hotel and amazing value under the legacy SPG program. I think it was a Category 2 hotel and was only 3,660 points a night so I paid $95 a night to upgrade to a one-bedroom suite. The Westin Dublin, again another amazing value under legacy SPG that was only 16,000 points a night as a Category 6 during high season in summer." — Soroya G.G.

"Le Méridien Visconti Rome, The Westin Palace in Madrid, Sheraton Lisboa Hotel & Spa in Lisbon and Le Méridien Lav in Split, all on points before the merger. Great redemptions with upgrades to suites." — Dante V.

"Staying at Hotel Cala di Volpe, a Luxury Collection Hotel, Costa Smeralda in Sardinia this summer. I'll report back after that." — Max P.

"St. Pancras Renaissance Hotel London in the Chambers Wing with automatic lounge access. So stately! It's right at King's Cross so it's accessible to so many trains. We had a junior suite that was larger than my first apartment." — Loren G.M.

Many of our TPG Lounge readers wrote in singing the praises of various Hilton properties around Europe. The Hilton Molino Stucky Venice was a major hit, as was the Rome Cavalieri, A Waldorf Astoria Resort. And if any of the below sound intriguing, be sure to check your Amex Offers to see if you're targeted for a discount!

"Hilton Molino Stucky Venice. Beautiful and away from the crowds but still just a stone's throw away by water taxi to Piazza San Marco." — Dan T.

"The Hilton Molino Stucky Venice is a beautiful hotel with great upgrades, a fantastic restaurant and it's away from the crowds. Rome Cavalieri, A Waldorf Astoria Resort had a great location, beautiful views and amazing service. At the Waldorf Astoria Edinburgh–The Caledonian, the location was great, breakfast was included and there were upgrades galore." — Kathleen M.S.

"About six years ago, I stayed at the Rome Cavalieri, A Waldorf Astoria Resort, for 50,000 points per night [now 65,000-80,000] and was upgraded to a city view executive floor with access to the Imperial Lounge. Over New Year's." — Harry H.

"Just stayed at The Waldorf Hilton, London on points. Great Covent Garden location surrounded by great shops, restaurants and several tube stops for convenient sightseeing. The Covent Garden tube line also goes direct to Heathrow, about a 40-minute ride. I stayed over a holiday weekend so prices were high but luckily I was able to get a good points rate." — Mary K.Q.

"Great but busy lounge at The Waldorf Hilton, London. Afternoon tea was served with Waldorf Salad, of course." — Conrad F.

"Hilton Tallinn Park had great, low redemption rates and a brand new property in the center of it all." — Sáf D.

"I did three fairly recently: DoubleTree by Hilton Hotel London - West End, Hilton Munich City and the DoubleTree by Hilton Amsterdam Centraal Station. The executive lounge and breakfast at the Munich and Amsterdam hotels were fantastic. All locations were close to public transit. The Doubletree in the West End gave me the best upgrade of my life, to a one-bedroom apartment with two floors, two bathrooms and a kitchenette. I would definitely recommend all three!" — Lisa B.

"I second that (Hilton Paris Opera), especially with an upgrade to one of the suites." — Teresa D.

Hyatt, IHG and Other Hotels Worth Mentioning

Some of our TPG Lounge members said they had great stays at Hyatt, IHG and Choice Hotels around Europe, while one said she was able to book an epic stay at a non-points hotel by going through Chase Ultimate Rewards.

"About to find out! Leaving Wednesday for two weeks and will be staying at the Park Hyatt Milan, Hotel Martinez In The Unbound Collection By Hyatt, Hotel Lungarno, and Hostaria del Relais San Lorenzo, all on points. 10 nights for 310,000 World of Hyatt points." — Tom T.

"The Hyatt Regency London The Churchill, my first-ever hotel redemption using the Hyatt two free night sign-up bonus. This week, I'm using IHG points to stay at the InterContinental Madrid and InterContinental Lisbon — the Madrid one looks old but stately and the Lisbon one has just been updated." — Soroya G.G.

"I liked the Intercontinental Paris Le Grand, where I used an Ambassador free night certificate. The Hyatt Regency Amsterdam was nice and in a quiet part of the city near public transport. DoubleTree by Hilton Hotel London - Marble Arch was also conveniently located, and the Intercontinental Budapest was situated along the Danube with nice views." — Toshiba G.

"Clarion Hotel The Edge in Tromsø had a great free breakfast included with a nice room!" — Jake H.

"Just had a really nice stay in The Saint James' Court, a Taj Hotel, in London. Not as fancy as you might expect, but very inexpensive with Chase Ultimate Rewards points. It's across the street from Westminster and in a beautiful part of town. Ask for one of the renovated rooms and you won’t be disappointed." — Gloria L.

Featured image by The Opera Brunch is held in this fancy room at Westin Palace Madrid. Photo courtesy of hotel.
Editorial disclaimer: Opinions expressed here are the author’s alone, not those of any bank, credit card issuer, airline or hotel chain, and have not been reviewed, approved or otherwise endorsed by any of these entities.