Exciting New Airline Routes for April 2019 and Beyond

Articles
Kaeli Conforti is a digital nomad and has been backpacking solo around Southeast Asia, Australia and New Zealand since January 2018. She loves inspiring others to travel the world and create their own adventures.
Follow
May 01, 2019
•
19 min read 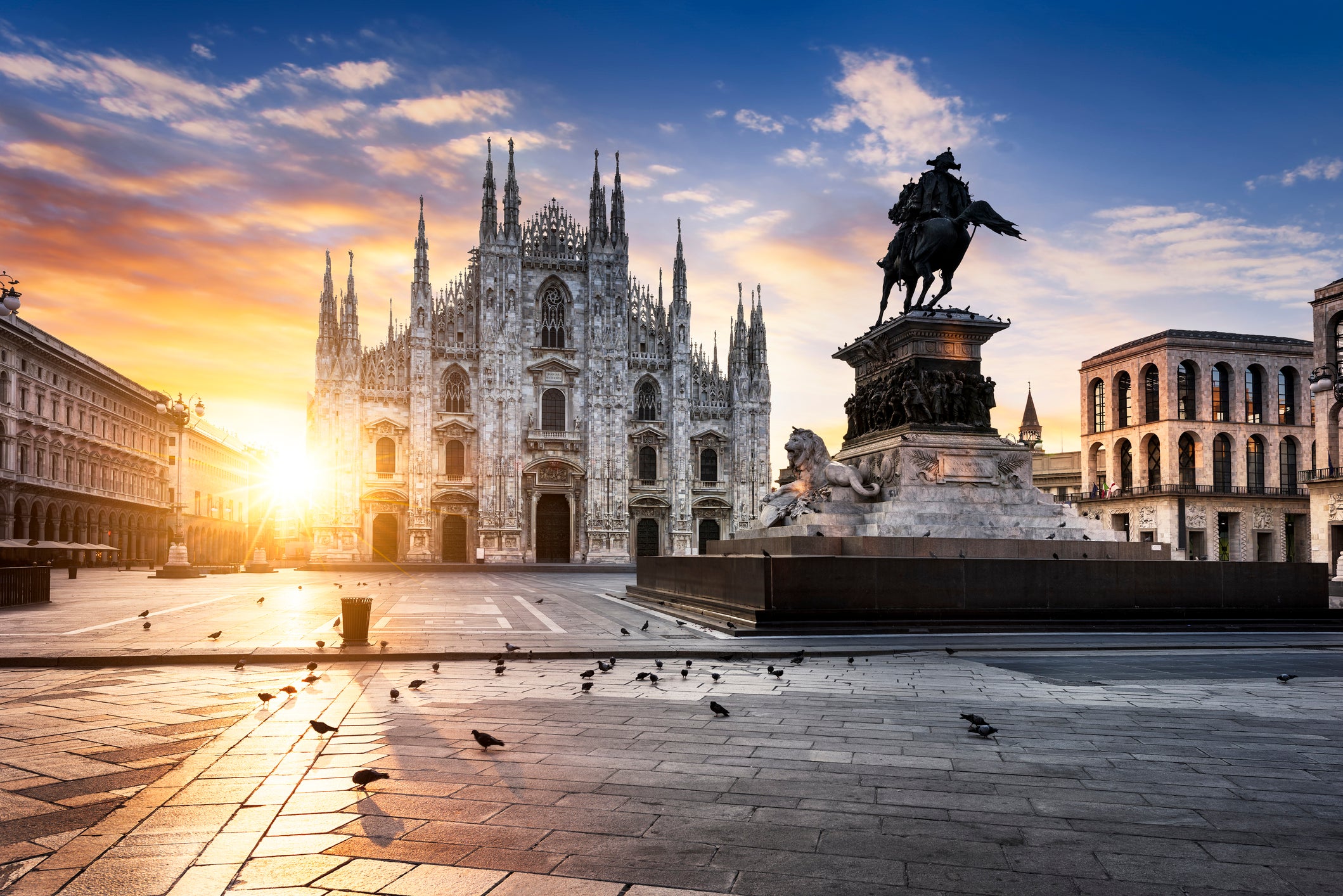 Exciting New Airline Routes for April 2019 and Beyond
This post contains references to products from one or more of our advertisers. We may receive compensation when you click on links to those products. Terms apply to the offers listed on this page. For an explanation of our Advertising Policy, visit this page.

Details — After postponing its upcoming route from Chicago (ORD) to Milan (MXP) to next year, Air Italy decided to launch not one, but two new routes this month from the West Coast, connecting Los Angeles (LAX) and San Francisco (SFO) to the iconic Italian city. As of April 3, the LAX–MXP flight operates four times per week on Sunday, Monday, Wednesday and Friday. The SFO–MXP route launched April 10 and also runs four times per week on Tuesday, Wednesday, Thursday and Saturday. Both are serviced by the carrier's A330 aircraft. Check out the full TPG reviews of its economy and business-class products for a better idea of what you'll be getting into.

New Flights to London on British Airways and American Airlines (Launched April 1, 2 and 4)

Details — It's getting easier for folks in the US to hop across the pond thanks to three new routes brought to you by American Airlines and British Airways. On April 1, American Airlines began flying nonstop daily from Phoenix (PHX) to London (LHR) with the carrier's 777-200 aircraft. British Airways began service between Pittsburgh (PIT) and LHR on April 2, with flights operating four times per week on Sunday, Tuesday, Wednesday and Friday aboard BA's 787-8 Dreamliner. Perhaps the most exciting launch by British Airways this month was the carrier's new nonstop service -- also on the 787-8 -- from Charleston, South Carolina (CHS) to LHR, making it the airport's first international nonstop flight. The catch? It's only operating on a seasonal basis twice a week on Sunday and Thursday from April 4 to October 24, 2019.

Pittsburgh to London (4x per week):

Charleston to London (2x per week):

Details — We've got great news for anyone planning a trip to Hawaii: Both Hawaiian Airlines and Southwest have added new routes to their respective networks, making your next tropical getaway even more within reach. Travelers in the Northeast can now hop a nonstop flight from Boston (BOS) to Honolulu (HNL) aboard Hawaiian Airlines' A330 five times per week on Sunday, Monday, Thursday, Friday and Saturday, while folks in Sacramento (SMF) can fly nonstop daily to Kahului, Maui (OGG), aboard the Hawaiian Airlines' A321neo. On the Southwest front, the carrier launched twice-daily nonstop service from Oakland (OAK) to OGG earlier this month, as well as interisland flights between HNL and OGG four times a day starting April 28.

Boston to Oahu on Hawaiian Airlines (5x per week):

Details — Round up the usual suspects! Earlier this month, Royal Air Maroc launched thrice-weekly service between Miami (MIA) and Casablanca (CMN), operating Sunday, Wednesday and Friday aboard the carrier's 787-8 aircraft. With nonstop service from Boston (BOS) expected to start in June, the airline is doing a great job making Morocco accessible to more travelers, especially once it officially becomes part of the Oneworld alliance in mid-2020. I think this is the beginning of a beautiful friendship.

Miami to Casablanca (3x per week):

Details — Cathay Pacific recently began nonstop service from Seattle (SEA) to Hong Kong (HKG), operating four times a week on Sunday, Monday, Wednesday and Friday until October 27, 2019, when it will add a fifth flight for each week on Tuesday. Best of all, the new route is being serviced by the carrier's A350-900 aircraft — TPG's Editor-at-Large Zach Honig reviewed the aircraft's business-class product, here — ensuring you arrive in style in Hong Kong after the transpacific flight.

Details — Calling all Outlander fans; it's time to start planning your dream trip to Scotland. American Airlines launched a new seasonal route from Philadelphia (PHL) to Edinburgh (EDI) on April 2, giving travelers a chance to visit daily via the carrier's 757 aircraft between now and October 26, 2019. The city makes a great base for exploring the rest of this beautiful country no matter what time of year you visit, so no excuses!

Philadelphia to Edinburgh on American Airlines (daily thru October 26, 2019):

Details — Delta's airline partner Virgin Atlantic launched an additional daytime flight between Boston (BOS) and London (LHR) on April 1 aboard its A330-300, while Korean Air began nonstop flights five times per week on April 12 from BOS to Seoul (ICN), operating Sunday, Tuesday, Wednesday, Friday and Saturday with its 787-9 Dreamliner. New daily nonstop routes between Seattle (SEA) and Osaka (KIX) as well as Minneapolis (MSP) and Seoul (ICN) are now operating daily aboard Delta's 767-300ER and 777-200ER aircraft, respectively. On the domestic front, the carrier also expanded service from its BOS hub to Cleveland (CLE), Pittsburgh (PIT), Jacksonville (JAX) and Nashville (BNA) and launched a daily nonstop hop between Atlanta (ATL) and Ontario, California (ONT), on April 22. Note that on Google Flights, the second daily flight for the ATL–ONT route doesn't appear on the schedule until June 17, 2019.

Boston to London (new daytime flight on Virgin Atlantic as of April 1, 2019):

Seattle to Osaka (daily as of April 1):

Minneapolis to Seoul (daily as of April 1):

Boston to Seoul (5x per week via Korean Air as of April 12):

More Domestic Flights From Sarasota and Phoenix on Allegiant Air (Launched April 3, 4 and 5)

Details — If you're anywhere near Sarasota, Florida (SRQ), it may feel as if you've just won the travel jackpot. Ultra-low-cost carrier Allegiant Air, which also applied to the US Department of Transportation this month in hopes of starting up service to Mexico, recently launched twice-weekly nonstop flights from SRQ to Harrisburg, Pennsylvania (MDT), Syracuse (SYR), Cleveland (CLE), Columbus (LCK), Richmond (RIC), Grand Rapids (GRR) and Nashville (BNA). Also noteworthy is its new route from Phoenix-Mesa (AZA) to Grand Junction (GJT), which operates three times per week.

JetBlue and Delta to Fly to London from Boston and NYC

Details — At long last, JetBlue has revealed exciting plans to launch nonstop service to London from Boston (BOS) and New York (JFK) in 2021, but it has yet to decide which of London's airports it will fly into. At the same time, Delta announced its own plans to begin flying from BOS and JFK to London's Gatwick Airport (LGW) starting next year, and will use its Boeing 767-400s. JetBlue will apparently go ahead with its Airbus A321LR aircraft, which will feature a "reimagined version of Mint" for those traveling aboard the carrier's first-ever transatlantic service. No details for launch dates or flight times have been released yet, but stay tuned to TPG as we continue to follow these developing stories.

Pending: Seasonal Service on United from Newark to Cape Town

Details — If everything goes according to plan, you'll soon be able to fly nonstop from Newark (EWR) to Cape Town (CPT) thanks to United Airlines' proposed seasonal service. While it's still subject to government approval, the plan is for three flights per week to run on Sunday, Wednesday and Friday aboard the carrier's 787-9 Dreamliner beginning December 15 — just in time for summer in one of South Africa's most picturesque cities — until the end of March 2020. Just a couple of days ago, United started selling tickets on this unique flight -- don't hesitate to book that bucket-list South Africa trip!

Eurowings Will Soon Offer Flights Between Las Vegas and Frankfurt

Details — Starting October 27, 2019, Lufthansa's budget-friendly affiliate airline, Eurowings, is expected to launch thrice-weekly nonstop flights on Sunday, Tuesday and Thursday between Las Vegas (LAS) and Frankfurt (FRA) aboard the carrier's A330-200 aircraft, a great option for folks on the West Coast itching to visit Europe for less.

New Flights on United from Washington, DC to Southwest Florida

Details — United is making it easier for travelers in Washington, DC (IAD), to escape the chill this autumn with twice-daily nonstop connections to Sarasota (SRQ) and Fort Myers (RSW) expected to begin October 29, 2019. Also on deck for United in October is an extension of its seasonal winter service between Miami (MIA) and IAD, which usually doesn't start until December.