Articles
Alberto Riva Alberto runs our flight reviews and oversees special projects across several verticals. Previously, he was the managing editor of Vice News and worked at Bloomberg and CNN, where he was constantly trying to convince people to do more stories about airplanes. He speaks Italian, French and Spanish and one day he’ll be better at German.
Follow
May 15, 2018
•
9 min read 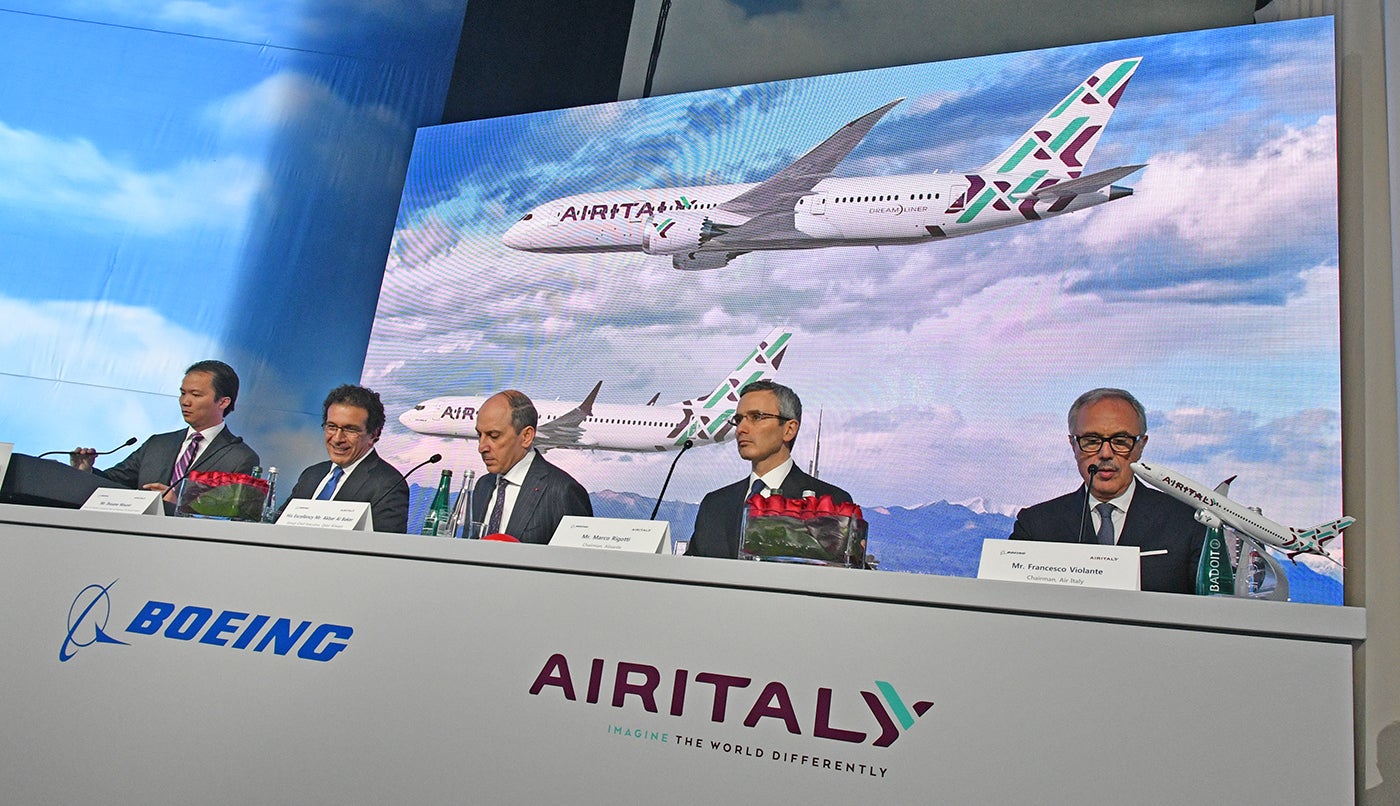 Meet Air Italy, the Airline That Wants to Make Milan Great Again
This post contains references to products from one or more of our advertisers. We may receive compensation when you click on links to those products. Terms apply to the offers listed on this page. For an explanation of our Advertising Policy, visit this page.

There's a new airline in Europe, and if its powerful Qatari backers are right, you'll be hearing about it a lot. Air Italy, which just took delivery of the first in a massive influx of 50 airplanes, has a five-year plan to turn itself from a niche player into the biggest international airline in Italy and possibly a member of the Oneworld alliance. If it succeeds, it will also turn Milan's Malpensa Airport (MXP) into a major hub — something it's never really been, depriving Italy's economic center of a connection to the globe on a par with its aspirations.

The man behind this bold move is Akbar al Baker, the chief executive of Qatar Airways, which bought a 49% stake in Air Italy last year. Al Baker, who heads the second-biggest of the Gulf Three airlines after Emirates, showed up in Seattle on Friday for the delivery of the first Boeing 737 MAX 8 to Air Italy — his presence a clear indication that this isn't a side bet for Qatar, but a big push into a market where Air France and Lufthansa currently dominate. The prize is the millions of Italian business flyers, mostly out of northern Italy, who now go to Asia and North America via other airports.

"Malpensa is in a region which is really the economic heart of Italy, and has not been the hub for Italy. The hub for Italy is Paris and Munich," al Baker told TPG during an interview in Seattle. "It is now our duty towards the Italian people as a shareholder of Air Italy to establish a very strong hub."

Air Italy is getting 20 new 737 MAX 8 single-aisle jets, and taking over 30 twin-aisle 787-8 Dreamliners from Qatar's fleet, both over the next five years. The former are intended to feed passengers from Italian airports; the latter are going to fly from MXP to all over the world, and will do that with Qatar's current layout and seats. (TPG has reviewed Qatar's 787 both in business class and in economy. There is no premium economy.) While it waits for the 787s, Air Italy will begin flying next month some Airbus A330-200s it leased from Qatar, to New York's (JFK) and Miami (MIA) followed later this year by Bangkok (BKK) and Mumbai (BOM).

For US-based flyers, especially those who collect Avios points, which you can earn and redeem on Air Italy, the new airline may be an attractive option. Business class on the A330s is in an unexciting 2-2-2 layout, but once the 787s arrive it will be in an all-aisle-access 1-2-1, up to the best international standards. And in economy, Air Italy is having a sale for less than $400.

Even more exciting for US passengers, Air Italy could soon be in the Oneworld alliance, whose US member is American Airlines. That means earning and spending AA miles and having one's Oneworld status recognized.

"It is imperative that we would look for Air Italy to become part of Oneworld," al Baker told TPG. "It’s too early for me to say when that will be, but I am sure that we will be pointing towards that."

Qatar's Italian play makes sense as a Oneworld strategy, too. The alliance has big hubs in London and Madrid and a smaller one in Helsinki. But there's a big hole in the middle of Europe, where rival groupings SkyTeam and Star Alliance are strong. Al Baker admitted as much. Qatar wants Oneworld membership for Air Italy "so that we have a very robust grouping in Europe competing with Star," he said in Seattle.

"The choice to capture demand from Northern Italy with international connections is a strategic choice, because there is a clear need now," Air Italy chairman Francesco Violante said. "Passengers today who want to fly long-haul must go to another European hub, and we think our strategy meets precisely this need," he told TPG. 30 Dreamliners is a sizable fleet, enough for daily flights to every major destination in North America and the big hubs in East Asia, the preferred destination of Italian business flyers.

Strictly speaking, Air Italy isn't new — it has been around since the 1960s, mostly as a small regional player. Originally known as Alisarda, it was a niche carrier that flew people to Sardinia when the island was first being sold as a tourist paradise, 50 years ago. Rebranded as Meridiana in the 1990s, it expanded in Europe and even started a couple seasonal flights to New York. In the 2000s it bought small Italian charter operators Eurofly and Air Italy, but later hit financial trouble and was plagued by strikes and labor unrest before Qatar stepped in last year — and presided over a rebranding with the name of one of the airlines Meridiana had bought.

Qatar Airways is limited to 49% of the shares because Qatar is not a European Union state, and without EU ownership the airline would be excluded from the so-called Open Skies agreements that liberalized flights between the Union and the US, and its traffic rights would be curtailed. The other 51% is held by a company still known as Alisarda, fully owned by the Aga Khan Fund for Economic Development. That is the investment vehicle for the 82-year-old Karim Aga Khan, the philanthropist and entrepreneur who is also the spiritual head of the Ismaili Muslims, a branch of Shia Islam with about 15 million followers worldwide.

Their joint project to make Milan's airport great again may remind observers of another recent attempt by a Gulf airline to take Italy by storm through a 49% stake in an Italian airline — the Etihad - Alitalia fiasco. The former Italian flag carrier was supposed to be the centerpiece of Etihad's expansion from Abu Dhabi into Europe. Instead it is now bankrupt and circling the drain, kept afloat only by a 900-million euro handout by the Italian government. It would be sweet revenge for Qatar, locked in a bitter dispute with its Gulf neighbors, if it could succeed at building a profitable airline in Europe, where its Emirati rivals have failed so hard.

Al Baker has already taken large minority stakes in several airlines around the world, including 20% of British Airways' parent company IAG and 10% each of Hong Kong's Cathay Pacific and Latin America's Latam. Combined with Qatar losing money this year, this looks like a strategy dangerously close to the Etihad expansion fail.

According to Marco Giovanniello, a Milan-based aviation consultant and air transport expert, Qatar isn't just investing in other airlines — it's also looking for a place to expand away from geopolitical tensions roiling its home region. "They're looking to put down roots somewhere far from the Gulf, where the atmosphere is getting heavy," he said.

As for how Air Italy plans to avoid Alitalia's fate, Alisarda chairman Marco Rigotti told TPG that he is running a very different play.

"We’re taking into account the experience of that project, because their goal was a quality product too. But that’s the only thing we have in common," he told TPG while standing outside his brand-new 737 at the Boeing Delivery Center. First, the Qataris aren't managing the airline. The Italians are. "We could not do this without a partner of this kind," he said, referring to Qatar Airways's expertise and vast fleet, "But at the same time we think our independence is fundamental, from a management and strategic point of view. And they’re very happy with this." Second, Air Italy doesn't have an unwieldy legacy business to defend: "Everything is growth for us. We don’t have an extensive network of domestic flights competing against low-cost carriers, and we don't want to compete with those. Our direct competitors are other international airlines." (Translation: Let Alitalia fight Ryanair for passengers who decide on price, but we are going for the people who really spend and we are taking them from Lufthansa.)

In time, when Air Italy gets all its 30 Dreamliners — a bigger long-haul fleet than Alitalia's — that may be bad news for the big European airlines used to the revenue from Italian business flyers. For now, it is certainly bad news for Alitalia. "After losing short and medium-haul flights to low-cost carriers, it will find itself under siege on long hauls too, which are already threatened by the arrival of Norwegian in Rome and Milan," said Gregory Alegi, a professor at Rome's LUISS university and at the Italian Air Force Academy.

But Alitalia is not what the people behind the Air Italy project say they are thinking about. "I don’t want to say anything negative about anybody. My job as a shareholder of Air Italy is to make sure that Air Italy is successful, and that’s what I’m going to concentrate on," al Baker said. And that, he added, he will do "in a very aggressive manner."

This story was amended to show that Alisarda was renamed Meridiana in the 1990s, not 1980s.