These airlines have stopped offering first class due to the pandemic 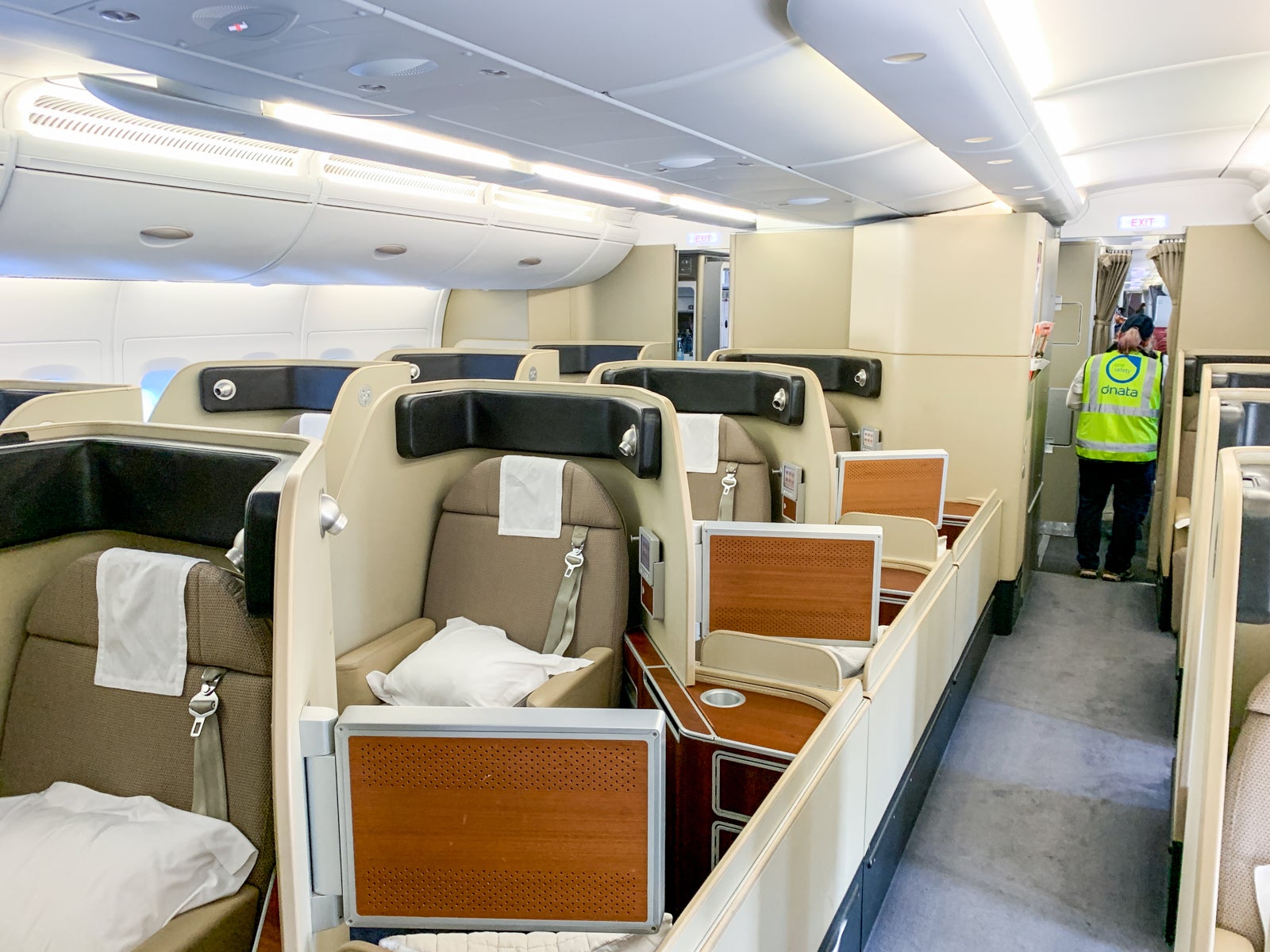 Airlines around the world are struggling and need to reevaluate their route networks and fleet strategies to stay afloat. As a part of that, many of them have made some difficult decisions regarding the future of their long-haul international first-class products.

The number of airlines and routes featuring a true international first class had already been on the decline pre-coronavirus. This is largely due to business-class seats, service and amenities improving to the point that many airlines didn't see a need for additional forward cabin anymore. Additionally, airlines have been shifting from double-decker jumbo jets like the 747 and A380 to smaller and more fuel-efficient aircraft with less space onboard to justify offering it.

Naturally, with the jumbo jets having largely been one of the first things to go for airlines looking to conserve cash during the pandemic, the future of international first class doesn't look very promising.

Here's a rundown of all of the airlines that have already removed some or all of their first-class inventory due to the pandemic.

With El Al retiring the last of its 747s last November, the only planes left in its fleet with first class cabins were its 777-200s. These planes will eventually be retrofitted with a completely overhauled business class, a new premium economy cabin and no more first class, but for better or worse, El Al has already stopped selling first-class seats. The seat map for 777-200 flights show first class seats blocked and first class is no longer listed as a travel class on El Al's website.

This news shouldn't come as too much of a disappointment though. El Al's new business-class seats are arguably significantly better than the old first-class seats. They are much more modern and will offer direct aisle access — a huge step up from the current 2-2-2 configuration in first class.

Etihad has pulled revenue and award first-class and Residence inventory for its fleet of Airbus A380s through at least the end of 2020, and in some cases until May 2021. It continues to sell first class on its three-class 777s and 787s (many of these planes have a two-class configuration).

The Abu Dhabi-based carrier said that it plans on gradually reintroducing its A380s once international travel picks up again. However, this move suggests that it likely won't be until at least 2021 until the A380s fly again. There's also a possibility the airline is considering removing first class from its A380s entirely, but that would be very unlikely given the costs associated with reconfiguring an aircraft.

In late July, Korean Air quietly removed first-class inventory from most of its long-haul flights through 2021. Certain flagship routes, such as from Seoul (ICN) to Los Angeles (LAX) and New York (JFK) still show first-class seats for sale, but the rest of the airline's long-haul route network doesn't.

Korean used to offer first on Airbus A380s, Boeing 747s and some Boeing 777s. The few routes to still have first-class are being operated by a mix of A380s and 747-8s. The airline hasn't shared yet what it plans to do with its planes that are equipped with a first-class hard product. It's possible that the airline will offer the seats as a buy-up upgrade for business class passengers, similar to what Asiana (another South Korean carrier) does with its old first-class seats.

Lufthansa has removed most first-class inventory to the U.S. and other destinations through late October. (It still offers it on a few routes such as Frankfurt to Los Angeles and Chicago.) This move comes roughly a year after the Lufthansa Group reinforced its commitment to keeping first class.

Lufthansa has first class on its A380s (grounded through at least 2021) and 747-8s, as well as some A330s and A340s. It had already removed the first-class cabins from the remaining 747-400s in its fleet before the pandemic. Worth mentioning, Lufthansa is among the few carriers that haven't made major changes to inflight service in first class due to the pandemic.

Singapore Airlines was hit especially hard by the crisis, slashing 96% of its capacity and temporarily grounding 138 of its 147 aircraft in late March. While it has resumed some flights, as of June 24, the airline has been blocking first-class inventory on all of its flights through at least Nov. 30. This affects flights operated by 777-300s and A380s, including those with the new first-class suites. These aircraft are used for routes like Singapore (SIN) to Sydney (SYD) and SIN to London (LHR), and the fifth-freedom flights from New York-JFK to Frankfurt (FRA) and Los Angeles (LAX) to Tokyo (NRT).

Related: A380 First Class Showdown: Emirates vs. Etihad vs. Singapore

Qantas offers first class on only one of its aircraft types: the A380. It has 12 of them in its fleet, and as of June 25, they've been grounded "for the foreseeable future," according to the airline's post-coronavirus recovery plan. The airline notes that this will represent "a significant percentage of their remaining useful life" and hints at the possibility of them never returning to service.

This news is especially disappointing considering that Qantas has been spending millions to refurbish its A380s in recent months. It's unclear yet what will happen to Qantas' first-class lounges while the A380s are grounded, but it's possible that they'll reopen for elite flyers and first-class passengers of partner Oneworld airlines. For instance, the Qantas International First Lounge in Los Angeles (LAX) isn't used just for Qantas first-class passengers, but also first-class passengers on airlines like British Airways, Cathay Pacific and Japan Airlines.

Related: A review of Qantas first class on the A380, Melbourne to LAX

Qatar currently only offers first class on its A380s. Qatar only has 10 of them in its fleet and primarily flew these jets to Asia, Europe and Australia before grounding them due to the pandemic. Qatar’s CEO Akbar al-Baker was quoted by Executive Traveler as saying “Qatar Airways is parking its 10 A380s and they will not return for at least a year, and maybe never.”

That said, Qatar is considering bringing back a small first-class cabin on at least some 777-9s once it takes delivery of them, which is expected to be in 2022.

Related: Qatar Airways will retire the 777, in favor of the 777X

Your options are starting to get limited if you are trying to book a first-class flight. Of the North American carriers, the only one to offer a true first class is American Airlines. You'll find its "Flagship First" product on its Airbus A321T (used exclusively for its premium transcontinental flights) and Boeing 777-300ER, flying from hub cities like New York-JFK, Los Angeles (LAX) and Miami (MIA).

Related: How to fly American Airlines Flagship First Class in 2020

In the Middle East, Emirates, Oman Air and Saudia are the only airlines that will offer first class, but the experience will not be the same as in the past. Emirates is closing down its onboard showers and bars once the A380s return to service, among other changes.

In Europe, the only airlines to offer a true first class are Air France, British Airways and Swiss.

Related: Is COVID threatening the future of international first class?

International first class was already beginning to go extinct in recent years and the sudden drop in demand due to the pandemic is certainly not helping. While there's a good chance Qantas will never fly planes with first-class cabins again, hopefully, Etihad, Lufthansa, Korean and Singapore are only temporarily blocking the cabins because they don't know which aircraft they'll operate in the coming months. They are likely trying to avoid selling seats they can’t deliver on.

For the airlines that are still offering first class, keep in mind that for the foreseeable future, service on board will be greatly reduced, and that the ground experience — with lounges closed or without food and amenities — will also be very different from the usual.