Articles
Ethan Steinberg has been a frequent flier for as long as he can remember. He went from studying abroad in Paris to moving to Shanghai after graduating college, where he covered all things travel in the Asia-Pacific region for TPG.
Dec. 06, 2018
•
11 min read 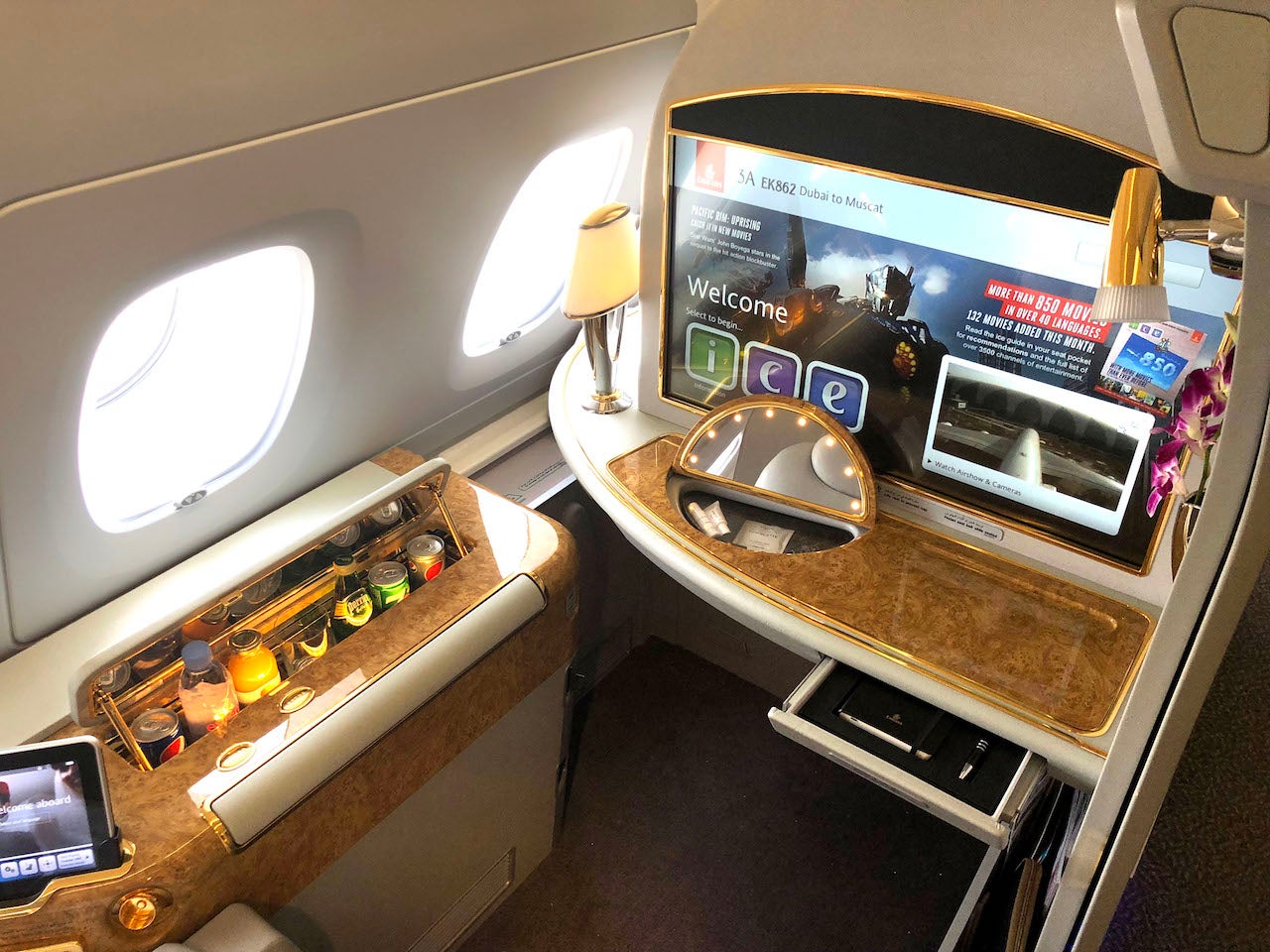 Emirates first class recently took home the TPG Award for best international first class, and for good reason. It might be the most sought after award ticket out there, and it certainly tops most travelers' bucket lists. The gold-studded "Jennifer Aniston" suite with closing doors, electronic minibars, and (of course) an on-board shower on select aircraft is enough to make heads turn. Adding to the allure is Emirates' massive fleet of over 100 double-decker Airbus A380 aircraft. These jumbo jets give airlines plenty of room to innovate and improve the passenger experience, and Emirates has consistently led the way in this regard.

Today we'll take an in-depth look at one of the top products in the sky, including how you can use miles to experience it for yourself.

To pique your curiosity, you can start by checking out the following Emirates first class reviews:

Emirates flies to over 100 destinations around the world, including 12 in the United States and one in Canada. All but one of these routes are operated by planes featuring a first class cabin; the sole exception is Fort Lauderdale (FLL), which is mostly served by a refreshed 777-200LR with an updated business class cabin (though according to ExpertFlyer, you can find first class on Sunday flights).

Emirates has scaled back its US routes in recent years, but you can still find the Gulf carrier's flagship A380 flying to the following six North American destinations:

While the A380 doesn't feature Emirates' newest seat (which can only be found on very select 777 aircraft), the whale jet is by far the best choice for US-based travelers and the only way to experience a shower at 35,000 feet.

Emirates uses a relatively streamlined fleet consisting entirely of Airbus A380 and Boeing 777 aircraft, though it also has 40 Boeing 787-10s on order. There are essentially three different versions of Emirates first class, depending on what aircraft you're flying. Each one carries pros and cons of which you should be aware.

Emirates' design team is clearly not familiar with the idea that "if it ain't broke, don't fix it." In late 2017, Emirates took delivery of brand new 777-300ER planes featuring a completely redesigned first class cabin.

These planes only feature six suites in the first class cabin, spread across two rows in a 1-1-1 layout. While Emirates' old suites were incredibly private, these new ones feature floor-to-ceiling walls for the ultimate in privacy.

Emirates worked with Mercedes-Benz to design a cabin that feels like a high-performance sports car and includes all the luxury touches you'd expect.

And, for the first time in history, you might face some stiff competition for a middle seat. Emirates installed virtual windows on these planes that use exterior cameras to give passengers in the middle seats a high resolution view of the scenery.

You can also control the lighting color and temperature in your suite to fully customize the experience.

And if you'd like to order food without having to talk to another person, you can call the flight attendants via video directly from the tablet at your seat.

Seriously, how stunning is this cabin!

The biggest drawback is that Emirates has been very slow with rolling out this product to the rest of the 777 fleet. Currently you'll only find this industry-leading seat on select flights between Dubai (DXB) and the following airports:

Just be sure to double-check the aircraft operating the flight to make sure you'll have the new configuration; you're looking for six first class seats on the seat map.

The plane that made Emirates the airline it is today is the A380. While other carriers have struggled to fill this giant plane and make it profitable, Emirates has over 100 of them and flies them to cities all around the world, often operating multiple daily frequencies of this ~500-seat plane.

The A380 features a much larger first class cabin, with 14 fully-enclosed suites at the front of the upper deck.

Each seat is 23 inches wide, which is not the most spacious first class product in the skies, but with the doors closed you'll have plenty of room to stretch out.

Each seat includes a motorized mini-bar stocked with water and soft drinks (which I've always found comically unnecessary —why drink a room temperature soda from a can when a flight attendant will happily serve it to you in a real glass with ice?), a pop-up vanity mirror stocked with some skincare products, a writing kit with Emirates stationery (that you're free to take home with you) and a tablet to control Emirates' incredible ICE in-flight entertainment system.

There are two unique amenities that make the A380 the plane of choice for most. First is the on-board shower(s). The first class cabin has two bathrooms/shower suites, one on each side of the staircase at the front of the plane. First class passengers get five minutes of water time to shower, though you can turn it on and off as much as you'd like to stretch out the experience.

If, after eating, watching a few movies and taking a shower, you still find yourself getting bored on the long flight, stroll back to the bar behind business class and stretch your legs. While the bar only stocks business class alcohol (oh the horror!), if you ask the flight attendants will happily grab you the good stuff from the front of the plane, including limited edition Dom Perignon P2 champagne or $900 a bottle Hennessy Paradis cognac.

Unless you're flying on one the specific routes mentioned above, you'll be in Emirates' older 777 first class. These seats are nearly identical to the gold-studded ones on the A380. On a 777, you'll find eight of them spread across two rows in a 1-2-1 configuration. Note that not all of Emirates' 777s have first class.

While you won't find a shower or bar on these planes. you certainly won't be slumming it either.

No matter what plane you're on, you'll get Emirates' same world class food, service and amenities. This includes a dine-on-demand menu (with caviar, of course).

And on longer flights, pajamas and a Bvlgari branded amenity kit.

For a highly-coveted premium product, Emirates first class awards used to be surprisingly easy to book. Unfortunately that's no longer the case, but there are still two programs that can help make this dream a reality.

The first is Japan Airlines Mileage Bank, which still offers reasonable pricing despite a recent devaluation. JAL's Emirates award chart is based on the total distance of all your flights, and you're allowed to include a stopover, potentially giving you two long-haul Emirates flights for the price of one.

The problem is that JAL recently decided (without warning) to begin passing on fuel surcharges on Emirates awards. These nefarious taxes are based on your departure city and can range from about $100 to well over $1,000. US-based travelers were hit especially hard, but if you pick your departure city carefully it's possible to reduce or avoid these taxes entirely.

If you're looking to fly Emirates first class from the US and avoid hefty taxes, you should look at Alaska Mileage Plan. Awards are incredibly expensive after a sudden 2016 devaluation, as you'll need 150,000 miles each way from the US to the Middle East. However, you'll pay $100 or less in taxes.

Illogically, Emirates' fifth freedom flights from the US to Europe are more expensive than flights to Dubai. A one-way first class award from New York-JFK to Milan (MXP) or Newark (EWR) to Athens (ATH) costs 180,000 Mileage Plan miles, even though the flights are barely half as long.

To boost your Alaska balance, consider opening the Alaska Airlines Visa Signature credit card, which is currently offering a bonus of 30,000 miles after you make $1,000 or more in purchases within the first 90 days of account opening. You could also take advantage of one of the program's frequent bonuses on purchased miles, allowing you to buy Alaska miles for as little as 1.97 cents apiece.

Scoring an Emirates first class award is not as easy as it used to be. If you're serious about making this happen, you'll need some careful planning and you better be ready to pony up a lot of miles (and potentially money as well). But don't let the cost scare you away, this is one of the best flight experiences possible and with hundreds of jumbo jets flying to almost every major city in the world, award space is easier to come by than you might expect.