Boeing Beats Airbus on Day 1 of the Dubai Air Show

Articles
Alberto Riva Alberto runs our flight reviews and oversees special projects across several verticals. Previously, he was the managing editor of Vice News and worked at Bloomberg and CNN, where he was constantly trying to convince people to do more stories about airplanes. He speaks Italian, French and Spanish and one day he’ll be better at German.
Follow
Nov. 12, 2017
•
3 min read 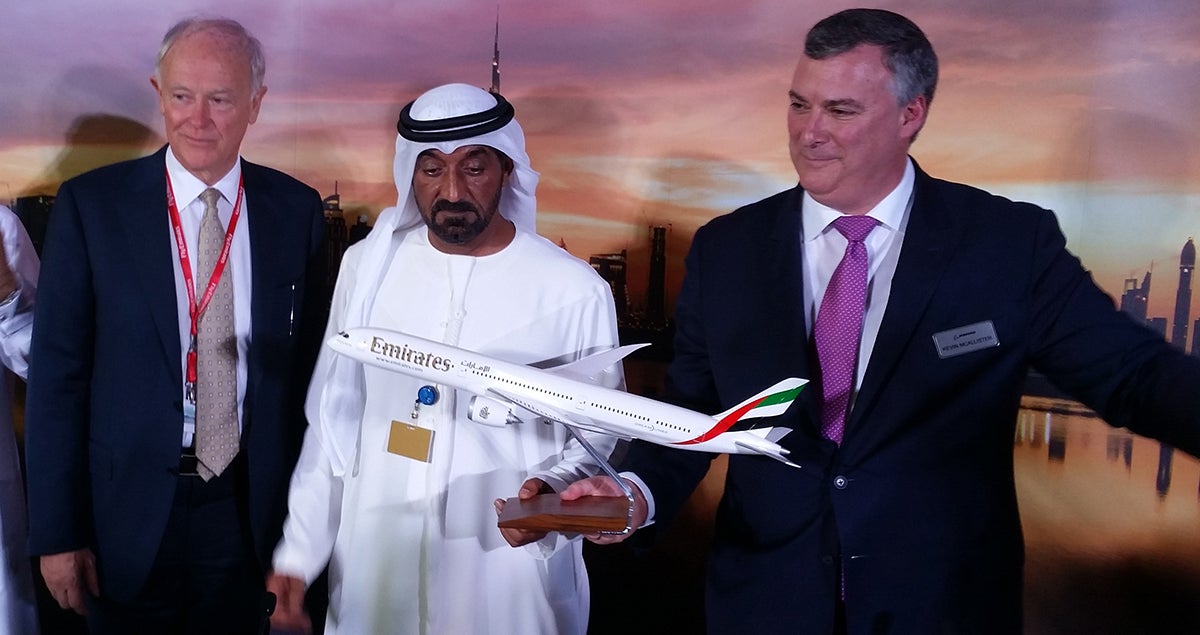 Boeing Beats Airbus on Day 1 of the Dubai Air Show
This post contains references to products from one or more of our advertisers. We may receive compensation when you click on links to those products. Terms apply to the offers listed on this page. For an explanation of our Advertising Policy, visit this page.

Score one for Boeing against Airbus on day one of the Dubai Air Show, with hometown airline Emirates announcing a large order for Boeing 787s but none for Airbus jets.

Emirates ordered 40 787-10, said Sheikh Ahmed al Maktoum, chairman and CEO of Emirates Group, at a press conference at the Dubai Air Show, which began Sunday. The order is worth $15 billion at list prices, and the 300-seater twinjets will be “delivered from 2022 onwards,” al Maktoum said. “Some will be used to replace older aircraft and to keep our fleet always young and modern,” he said.

The Airbus A350 was a contender for the order, but the Dreamliner "was the better option," al Maktoum said. The 787 will be a new airplane for Emirates, the biggest operator of both the Airbus A380 and the Boeing 777, which are the only models in its fleet. Speculation has been swirling among air show attendees that Airbus and Emirates would soon announce an order for as any as 40 A380s, in addition to the 100 already in the fleet and 42 on order, but that hasn’t happened yet. Any order would be a much-needed lifeline for the A380, which is in danger of extinction if Airbus can’t persuade airlines to buy more.

The 787-10 seats typically around 300 passengers, but for Emirates that’s actually on the small side — besides the A380 the airline operates the 777-300ER, which seats 354 people in the least dense Emirates configuration. Analysts had been speculating for months that Emirates would order soon a smaller airplane to open new destinations where 350 seats or more make little commercial sense.

And opening new destinations is just what the 787-10 will allow Emirates to do, at least according to what Kevin McAllister, CEO of Boeing Commercial Airplanes, said at the press conference. As for what those routes will be, “that’s up to our commercial guys and planning department,” al Maktoum said. And why did Emirates go for the biggest of the 787s when the smaller 787-9 is available? There are “so many things, not only price and technical” details behind the choice of the 787-10, al Maktoum said.

Emirates reported last week that profit rose 77% in the first half of the year, with passengers growing 4%.

To cap off a good start to the air show — one of the big aviation trade events where airlines and planemakers typically announce orders — Boeing also got an order for five 787-8s and two unspecified large freighters, either the 747-8F or the 777F, from Azerbaijan Airlines, McAllister said in another press conference. If the two freighter orders go to the 747, it would be a small breath of fresh air for the Jumbo Jet, another giant four-engined aircraft that’s succumbing to smaller, highly fuel-efficient twinjets.