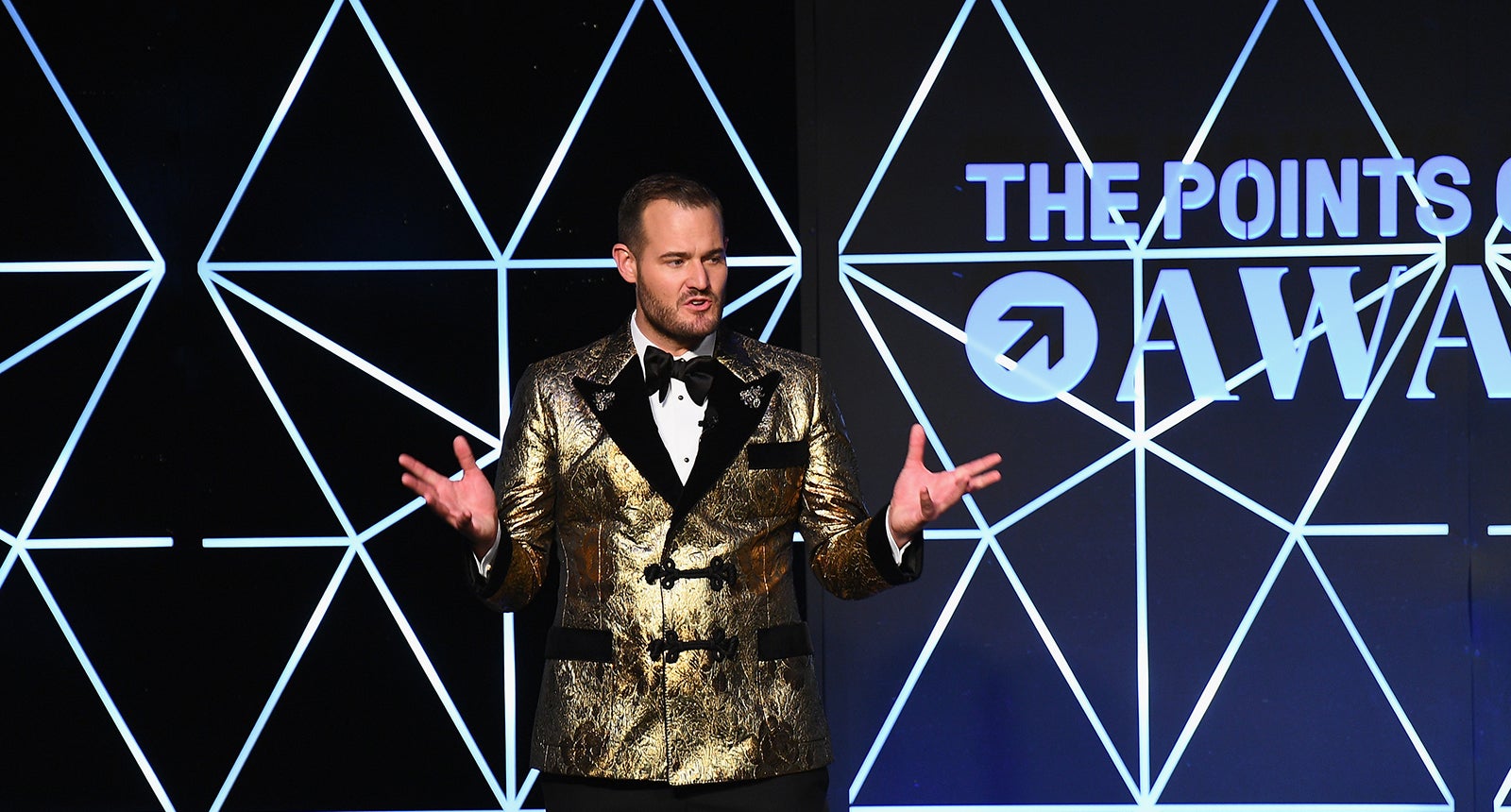 Last night was the inaugural TPG Awards, and it was truly an incredible night. From special awards to Nobel Laureate Leymah Gbowee and Captain "Sully" Sullenberger (presented by Ric Elias, CEO of TPG parent company Red Ventures and a passenger on the flight he successfully brought down in the Hudson River) to a musical performance by Bebe Rexha, it was a great way to celebrate the worlds of credit cards, travel and loyalty.

Premium Card of the Year

The winner of the Premium Card of the Year award was the Sapphire Reserve, a favorite here at TPG. Readers clearly valued the array of perks on the card, including a $300 annual travel credit (more on that below), 3x points on travel and dining purchases and various protections and coverage to give you peace of mind while shopping and traveling. Even though the card carries a $550 annual fee, it's quite easy to extract a large amount of value from it.

Mid-Tier Card of the Year

The Sapphire Reserve's less expensive sibling took home the Mid-Tier Card of the Year award. While the earning rates are cut slightly (2x on travel and dining), you'll still earn full Ultimate Rewards points that can be transferred to numerous airline and hotel partners, and with a much lower annual fee ($95), it can be a great introduction to the world of transferable points, though with other cards announcing new transfer partners and enhanced earning rates, it'll be a fight for the card to keep this title in 2019.

No-Annual-Fee Card of the Year

Chase wrapped up a personal card trifecta by winning the No-Annual-Fee Card of the Year award for its Freedom Unlimited. While technically just a cash-back card offering 1.5% back on purchases, savvy TPG readers know that you can transfer these earnings to full Ultimate Rewards points by also holding one of the Sapphire cards (or the Ink Business Preferred Credit Card). The card does incur foreign transaction fees though, so this should not be your first choice for purchases outside the US.

Not only did the Sapphire Reserve take home the honor for premium cards; its $300 travel credit was voted the winner of the Best Credit Card Perk. This benefit essentially reduces the card's annual fee to just $250, since these credits are applied instantly and automatically each cardmembership year and count towards an array of purchases, including flights, hotels, taxis, Uber, tolls and even parking garages.

There were several new credit cards launched in 2018 and many more that underwent overhauls, and readers selected the Hilton Amex Aspire card as the best one. Launched in January, the card carries a $450 annual fee (See Rates & Fees) but offers an array of perks, including top-tier Diamond status, annual credits with a designated airline and at Hilton resorts, and many more. While Hilton Honors may not be the most valuable program out there, this card has a very strong value proposition and even took home a second award (see below).

While the personal version of the card came up just short in the voting for premium cards, the Amex Business Platinum took home the award for Best Business Credit Card. Small business owners obviously value the long list of perks on the card; some of our favorites include the 35% rebate for using Pay with Points and automatic Marriott and Hilton Gold status. The card did just add some new benefits and hike its annual fee to $595 (See Rates & Fees) starting on your first card renewal date after February 2019, so it'll be interesting to see if the card retains its title next year.

Delta SkyMiles may not have the most lucrative redemption model, but readers clearly value its credit cards highly, as the Platinum Delta Amex won the award for Best Airline Cobranded Credit Card. In addition to providing perks like free checked bags and bonus points on Delta purchases, you'll also get a companion ticket every year, after renewal. As long as the value of your companion's flight covers the $195 annual fee ($250 if application is received on or after 1/30/2020) (See Rates & Fees) on the card, it's easy to come out ahead.

In addition to winning the award as the best new/refreshed card, the Hilton Amex Aspire also took home honors as the Best Hotel Cobranded Credit Card.

It may be time to take Richard Kerr's advice and retire the derisive term "SkyPesos" from your vocabulary; despite having no published award charts, Delta SkyMiles was voted as the Best US Airline Loyalty Program, narrowly edging out Southwest Rapid Rewards. I'm guessing that a large part of this was based on the carrier's Medallion elite status program, and it shows that there are many Delta loyalists out there.

In August, the Marriott, SPG and Ritz-Carlton programs were officially integrated, and despite a myriad of issues in the days, weeks and months afterward, the combined program took home the award for Best Hotel Loyalty Program. Now, it's worth noting that these votes were tallied before the massive data breach was announced, and the program will launch peak pricing in 2019, so only time will tell if Marriott will keep its spot next year.

A modern cabin, industry-leading legroom and top-notch IFE options are just a few reasons JetBlue beat out the rest of the major domestic airlines in the economy category. Even though the airline is adding a basic-economy product, based on hard product alone, it'll be hard to top B6 next year.

Hands down, JetBlue features the best business-class product for a domestic airline. A private suite for a cross-country flight? We'll take it! Combine a phenomenal seat with friendly service and tasty food, and you've got a winning formula that has put other domestic carriers on defense.

Qatar hit it out of the park with its Qsuite business-class product. Not only are the suites supremely private, they're beautifully designed, come packed with loads of quality IFE and feature hotel-quality bedding. And, Qatar's food and beverage program and service are phenomenal.

Emirates is the standard-bearer for international first-class products, without a doubt. Even with its "old" suite product, the food, beverage, entertainment and service really show that the Dubai-based carrier has spent a ton of time (and money) perfecting this product.

Delta completed a clean sweep of the airline-focused awards by taking home the honor of Best Airline Promotion thanks to its slate of discounts throughout the year, including 10,000-mile domestic awards, 40,000-mile awards to Asia and 50,000-mile awards to Australia. If you could take advantage of one of these sales, you could've received some incredible value for your SkyMiles.

In addition to winning the award for best hotel program, the combined Marriott/SPG/Ritz-Carlton program also won the Best Hotel Promotion award for the first post-integration MegaBonus offer. Through this promo (one that is still open to new registrants), you'll earn 2,000 bonus points for each stay of 2+ nights through Jan. 26, 2019 and an extra 1,000-point bonus for each different brand you experience (starting with the second brand). These bonuses are worth just $18 and $9, respectively, but with other programs offering similarly lackluster promotions in 2018, MegaBonus was pushed to the top.

Earlier in the year, Amazon and American Express partnered to offer a discount that took home the award for Best Credit-Card Promotion. In early July and then again as part of Prime Day, you could score a discount of 20% (up to $100) on your Amazon purchase by redeeming at least 1 Membership Rewards point. Despite numerous transfer bonuses to airlines throughout the year, the wide applicability of this offer was a clear favorite among TPG readers and will hopefully return as Prime Day 2019 approaches.

The award winners of the inaugural TPG Awards covered a wide swath of the credit card, travel and loyalty spectrum. While Chase was a reader favorite with personal credit cards, American Express took home honors in the small business and cobranded card categories. Marriott and Delta were the big victors on the hotel and airline loyalty side, though JetBlue swept the editor's choice awards for domestic flights and two Middle Eastern airlines took home honors for their renowned international premium class cabins.

A big thank you to all of our sponsors and you, our loyal readers, for weighing in on the awards. We had tens of thousands of votes cast across the two rounds of voting, and we're hoping for even more next year. Speaking of which, we're already working on plans for the second annual TPG Awards in 2019, an event that's sure to be even bigger and better than this year.

Featured image by Getty Images for The Points Guy
Editorial disclaimer: Opinions expressed here are the author’s alone, not those of any bank, credit card issuer, airline or hotel chain, and have not been reviewed, approved or otherwise endorsed by any of these entities.