Articles
Jason Steele has been a Senior Points and Miles Contributor for TPG since 2012. He covers credit cards, loyalty programs and family travel.
Follow
May 29, 2021
•
12 min read 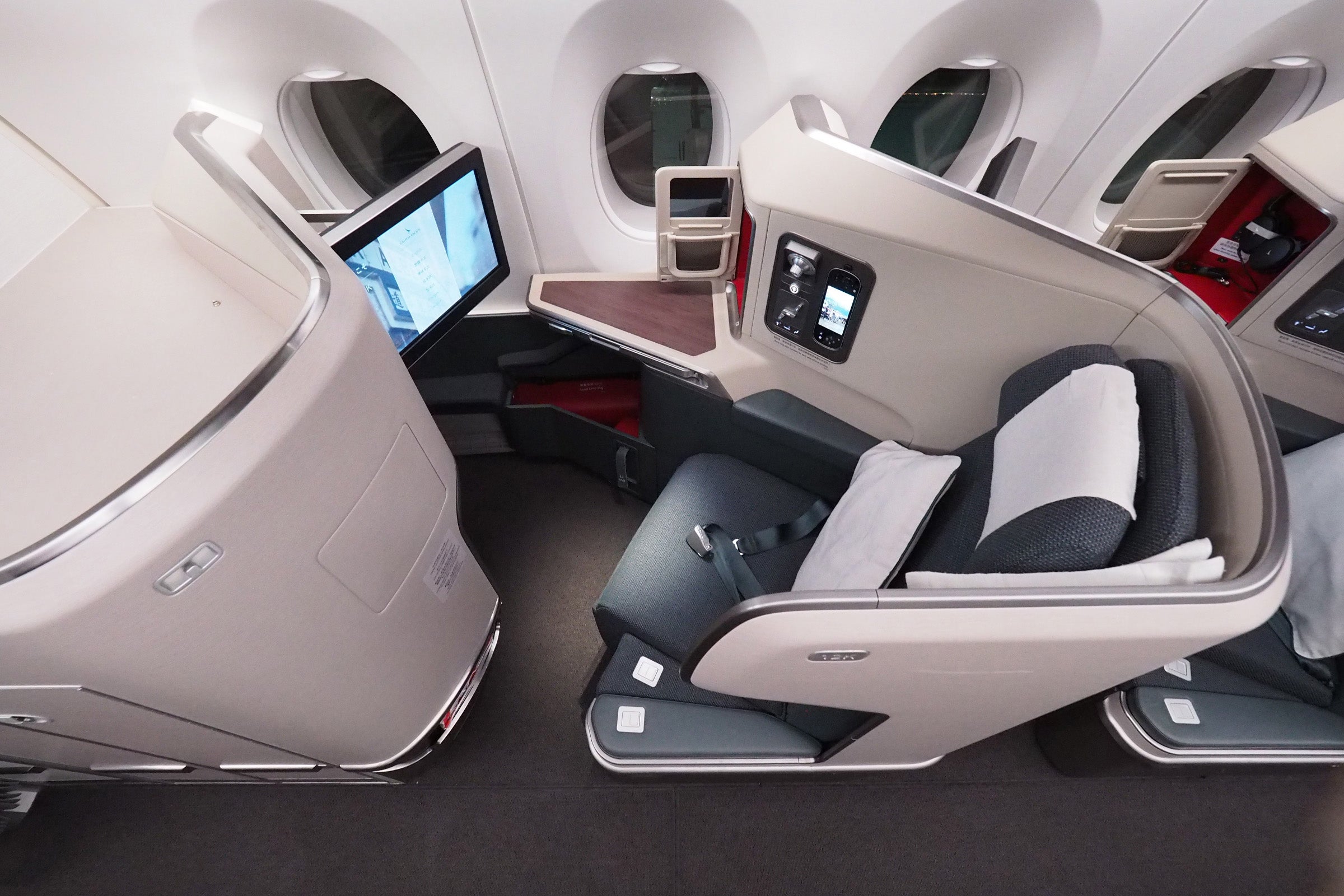 While most people save up Marriott Bonvoy points for hotel stays, the program allows you to transfer points to 41 airline partners across all major alliances. The transfer ratio is 3:1 in most cases, with a 5,000-mile bonus for every 60,000 points transferred.

Which Partners Are Unique to Marriott?

Of the 43 current transfer partners, nearly half of them are unique to the Marriott Bonvoy program, meaning they're not found among the airlines that partner with Amex Membership Rewards, Chase Ultimate Rewards, Citi ThankYou Rewards or Capital One Miles.

Although some of these frequent flyer programs offer you great value for your miles, others have little (if any) relative value and should only be used for topping off existing accounts, if at all.

In today's post, I'll examine the first dozen programs and follow up with the remaining programs in Part 2. I'll also include details on how long these points take to transfer based on the tests we ran. Finally, remember that most points transfer at a 3:1 ratio, with a 5,000-mile bonus for every 60,000 Marriott points you transfer. I'll indicate below when a specific carrier uses a different rate.

This Greek carrier is a Star Alliance partner and can be one of the most valuable ways to use your Marriott Rewards points. Among the many sweet spots on its award chart are:

Just note that you can only have one connection (two flights) in each direction. Also, Aegean will impose fuel surcharges on many of its partners, and it'll take a few days for your miles to arrive. However, once you've ticketed an award, you'll only need to pay a fee of 20 Euros to change it, so this could be a great way to book an award ticket and then upgrade to a higher class of service as your departure date approaches.

This Russian airline is part of the SkyTeam alliance and offers a few attractive awards. For example, it includes Canada, Central America, the Caribbean, Hawaii and Alaska as part of its North America Zone, with economy class flights for 15,000 miles each way and first class for 30,000. This can be a bargain if flying to or between Hawaii, Mexico, the Caribbean or Central America.

Also, business class awards to Argentina, Brazil and Chile are cheap at just 75,000 miles round-trip on SkyTeam partners Delta and Aerolineas Argentina. Even flights to Moscow are a good deal at just 110,000 miles, round-trip in business class. Just note that Aeroflot tends to impose fuel surcharges, and in our tests, it took nearly three weeks for the miles to arrive after transferring.

Related: How to redeem points with the Marriott Bonvoy program

PhoenixMiles doesn't have the best award chart, let alone one that's easy to use, but it can offer some good awards on Air China flights. For example, domestic round-trip awards in China begin at 15,000 kilometers, for a round-trip for award flights under 800 km in distance. Unfortunately, we haven't been able to transfer Marriott points to Air China successfully. Despite verifying that we're using an active, open account, we continue to receive an error message when trying to transfer.

Thankfully, there isn't much value you're missing.

Air New Zealand is a fine airline with a terrible frequent flyer program. Between exorbitant fees, an expensive award chart and frequent, no-notice devaluations, Airpoints is often said to be one of the worst in the world. I'll spare you the disappointing details and advise you only to transfer to this program if you've already made the mistake of crediting past flights here and need to top off your account. If that's the case, redeem your remaining miles and never speak of this program again.

Related: What is Marriott Bonvoy elite status worth in 2021?

This is certainly one of the most valuable of all of Marriott's unique transfer partners, though it took 4 days for the transfer process to complete. Among some of the great awards available are:

The program does have some routing rules you should know, but there are some great ways to maximize your awards. For more information, read TPG Senior Contributor Richard Kerr's post on 5 Things to Know About Alaska Airlines Mileage Plan.

It's rather surprising that Marriott Bonvoy is the only transfer partner of American Airlines, especially given its relationship with Citi. Even though there are some roadblocks to using your AAdvantage miles, you can still get some solid value from the program. Among the best uses of American AAdvantage miles are:

This South Korean carrier is a member of the Star Alliance and one of the most undervalued airline loyalty programs. Since Marriott is the sole transferable currency with which it partners, the airline also earned a spot on our list of The Hardest Airline Miles to Earn and Why You Want Them. Great bargains include:

Just note that it did take 4 days for Asiana to receive the points we transferred from Marriott.

This SkyTeam carrier has a distance-based chart for its own flights that isn't terrible, but its partner award chart is so expensive that it's not worth utilizing. The program's one-way awards are roughly equivalent to the price that most programs charge for round-trip flights, so don't bother considering this as an option for your Marriott points.

This is another Chinese SkyTeam carrier with a decent distance-based chart for its own flights but a partner award chart that is so expensive that it's not worth utilizing. Like China Eastern, its one-way awards require about as many miles as other programs charge for round-trip flights. We also struggled even to create an account to test transfers, so I'd recommend staying away.

This Panamanian carrier once used United's MileagePlus as its frequent flyer program, but it created its own in 2015. However, vestiges of the old connection are obvious, as the award chart is nearly identical to United's, which in turn is a partner of both Marriott Bonvoy and Chase Ultimate Rewards.

Considering that you can transfer your Marriott points to MileagePlus at a 3:1.1 ratio (10% more than most other partners thanks to the RewardsPlus partnership), there's just one reason to use this program instead.

It also allows two open-jaws and one stopover on award tickets, just like United used to allow before eliminating stopovers and creating the confusing (but sometimes valuable) Excursionist Perk.

Note that our test transfer from Marriott to Copa took 3 days to process.

However, because this is an ultra-low-cost carrier, the value of the miles is diminished significantly because of the low price of most of its tickets. Add to that all of the fees on seat assignments, carry-on bags and checked bags, and it can be hard to find enough value in this program to make it worth transferring miles. Also, you have to pay redemption fees when booking flights within 180 days of travel, which are waived for elite members. Since you can get elite status solely through the carrier's credit card, transfers to this program can be useful for existing elites. However, our test found that the miles didn't arrive until ~6 weeks after initiating the transfer.

This fantastic program used to be a Chase Ultimate Rewards transfer partner. One of the best bargains in this program is on round-trip flights to Hawaii on Delta, which are only 25,000 miles in economy and 45,000 miles in first class. The same prices also work for Mexico, Puerto Rico and the US Virgin Islands.Even flights to Hawaii, Mexico and Costa Rica on non-SkyTeam partners Alaska and Hawaiian are just 30,000 miles round-trip in economy and 60,000 in first. Round-trip flights to Europe in business class are 80,000 miles, and the Middle East is just 120,000 miles. And since the miles posted less than 48 hours after transferring, it's one of the faster partners of Marriott Bonvoy.

However, it can be challenging to find award space and book it due to Korean Air's poor website and numerous quirky rules and procedures for redeeming miles. However, I've successfully redeemed several awards on Korean, and it's not too hard once you learn how. For more information, read my post on How To Book Award Flights with Korean Air SkyPass.

Most of the carriers we've covered today don't offer enticing reasons to transfer your Marriott points to their respective loyalty programs. Some have exorbitant rates, while others present challenges or lengthy delays in receiving the points you transferred. However, a handful could make sense, including Aegean, Alaska, American, Asiana, and Korean Air. Just make sure you carefully calculate the required number of points it'll take to translate into the number of miles you need and remember to factor in the transfer times, so you don't wind up with a pot of miles and no award to book.

Stay tuned for Part 2 of these unique partner programs tomorrow.

How have you been able to utilize these frequent flyer programs?

Featured image by (Photo by Zach Honig / The Points Guy)
Editorial disclaimer: Opinions expressed here are the author’s alone, not those of any bank, credit card issuer, airline or hotel chain, and have not been reviewed, approved or otherwise endorsed by any of these entities.