How to get to Helsinki on points and miles

Articles
Ariana Arghandewal has been writing about points and miles for almost a decade. She previously served as editor at FlyerTalk, Frugal Travel Guy and NerdWallet while running her own travel blog, PointChaser.
Follow
Aug. 16, 2021
•
11 min read 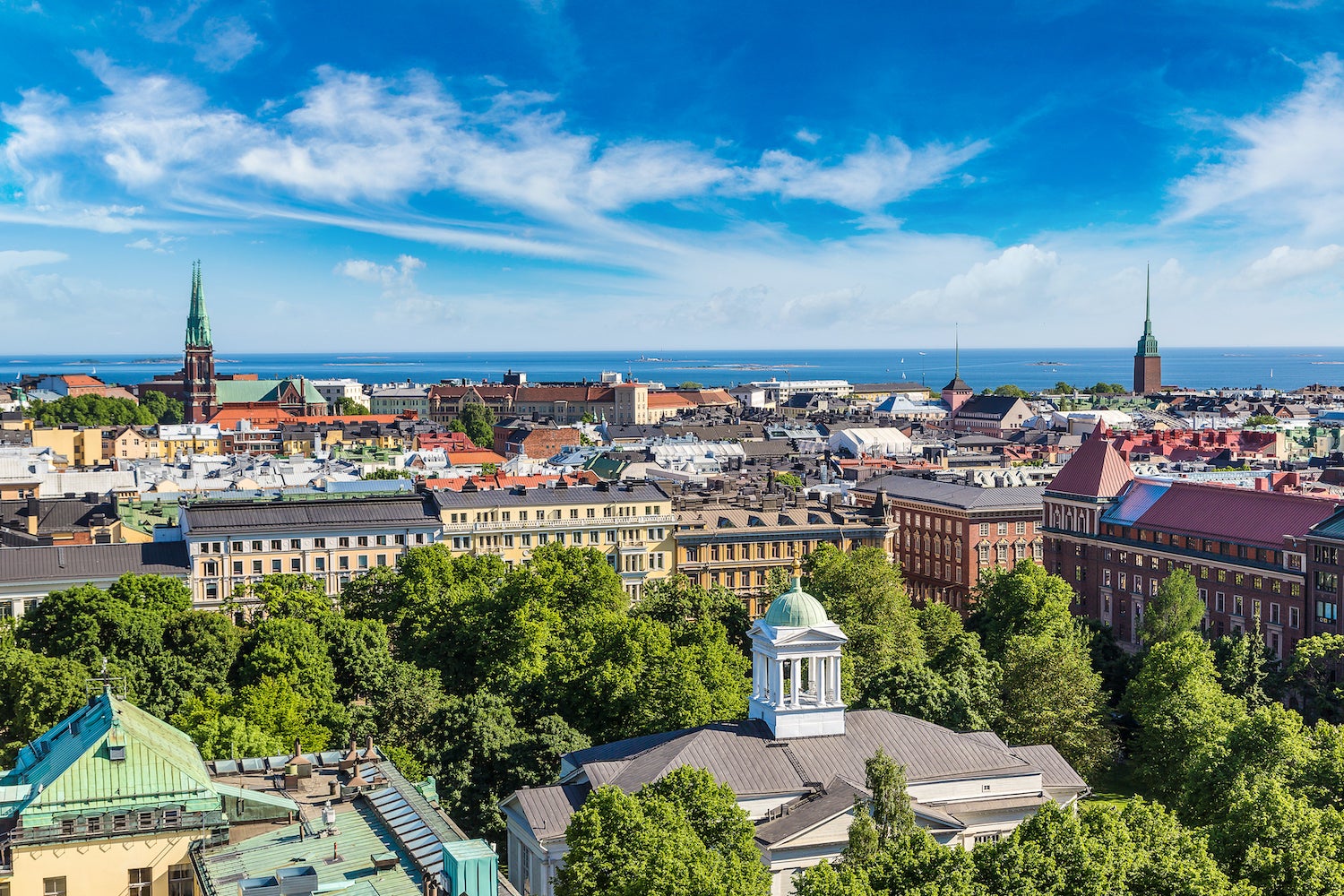 As of July 26, Finland began officially welcoming American tourists again. Helsinki became a popular destination over the last few years, thanks to a big tourism push, incredible scenery and cheap fares. All of that came to a screeching halt last year when the pandemic forced Finland to close its borders and reopen them to tourists from the Schengen Area only.

There are many options for redeeming miles for a flight to Helsinki (HEL). While using points and miles can sometimes be the best option to get to your destination at the lowest cost, Helsinki is one of those destinations where fare sales pop up quite often, so you might actually find that this particular journey is more cost-effective by paying cash rather than booking a traditional award ticket.

Be sure to consult TPG's valuations when comparing paid fares against mileage redemptions.

The value of American Express Membership Rewards points redeemed for flights is 1 cent apiece if you have a card like The Platinum Card® from American Express. However, if you have The Business Platinum Card® from American Express, you get a 35% rebate on Pay with Points redemptions for eligible first- or business-class fares booked through Amex Travel (up to 500,000 points back per calendar year), as well as on all flights booked on the same airline that you have designated for your $200 annual airline fee rebate.

For example, Turkish Airlines offers round-trip economy fares between New York (JFK) and Helsinki (HEL) as low as $572 in late March. Meanwhile, American Airlines requires 60,000 miles round-trip. Since TPG values American miles at 1.4 cents each, you're giving up $840 worth of value. In this case, you're better off saving your AAdvantage miles and redeeming 57,200 Capital One Venture miles instead.

Citi ThankYou points earned on cards like the Citi Prestige® Card and the Citi Premier® Card are worth 1 cent apiece when redeemed for airfare.

Redeeming miles for a flight to Helsinki makes sense if paid fares are high or you don't have access to the redemption options outlined above.

The Oneworld alliance isn't always the best option for redeeming miles to Europe, but Helsinki is the exception, with Finnair being a member. You can redeem AAdvantage miles at 30,000 each way in economy or 57,500 in business. Just watch out for those British Airways flights that might sneak in there and tack an extra $700 to your award ticket.

British Airways Avios might work out cheaper, depending on your origin and whether you can score a direct flight. We found economy fares as low as 22,000 Avios between New York (JFK) and Helsinki. Business-class award space was limited throughout the year.

If you're flying out of the West Coast, you'll still need 34,000 miles each way. Because of the higher number of miles and taxes, you're better off redeeming AAdvantage miles since the taxes are just $25.70 on the outbound flight.

The easiest option for booking Star Alliance awards to Finland is United MileagePlus. Economy awards start at just 30,000 miles each way, while business class starts at 49,500.

You can stock up on MileagePlus miles with their cobranded credit cards or by transferring Chase Ultimate Rewards at a 1:1 ratio.

You can transfer miles to ANA from Membership Rewards at a 1:1 ratio. If you don't have any Amex points, The Platinum Card is a great option to look into. The card currently offers 80,000 points after spending $6,000 in the first six months of account opening. That's enough for a round-trip flight, with points to spare for a hotel booking.

When you think SkyTeam, you typically think of Delta. While Delta SkyMiles could be a good option for flights to Helsinki, they're not the cheapest. You can book flights from both the West and East coasts, starting at 40,000 SkyMiles each way.

For a cheaper SkyTeam award, you'll want to look at Flying Blue redemptions. These will set you back as little as 24,00 miles each way in economy from the East Coast and 27,500 from the West Coast.

You can also book premium economy starting at 57,500 miles each way from both coasts.

Flying Blue miles happen to be some of the easiest miles to earn, thanks to transfer partnerships with American Express Membership Rewards, Capital One miles, Citi ThankYou, Chase Ultimate Rewards and Marriott Bonvoy.

Hotels you can book with points

Helsinki isn't a huge hotel market, but all the major hotel chains have established properties there because of its increased popularity. Here are some hotel options using points and miles:

Hilton has three hotels in Helsinki, including one at the airport. The Hilton Helsinki Strand is located in the city center, within walking distance of the most popular tourist sights. At 40,000 points per night, it might not be an ideal use of Hilton points.

For the next few months, room rates are under $190 per night and TPG values Hilton points at 0.6 cents each. So you're better off saving your points for a different award. Instead, consider using a currency like Capital One Venture miles or the Citi Prestige fourth night free benefit on longer stays.

With six properties, IHG Rewards Club has the largest hotel footprint in Helsinki. IHG no longer publishes an award chart, but redemption rates are fairly consistent and generally range from 12,500-30,000 points per night.

Hotel Indigo is great if you want a boutique hotel with a great price and location near Helsinki Central Station. You'll redeem just 27,500 points per night.

While these rates are solid, you can knock an extra 25% off with the fourth-night award benefit from the IHG® Rewards Premier Credit Card.

If you have a few Marriott 35,000-point certificates burning a hole in your pocket, Helsinki may be the place to put them to use. Marriott has four properties throughout the country, ranging from Category 2 to Category 5. Your best bet will probably be the Category 5 Hotel St. George or Hotel U14, bookable for 35,000 points per night on several dates in March and April 2022.

Both properties are located in the heart of the city, close to popular attractions, shopping and dining.

Radisson Rewards often gets overlooked, but they have a pretty expansive portfolio, especially in Europe. Their paid rates also tend to be lower and at 20 base points per $1 spent, you can earn a ton of points for future redemptions.

Any of these properties would be a great choice. Just be sure to compare the awards against cash rates. TPG values Radisson points at 0.4 cents each, so award redemptions at the top-tier Radisson Blu Plaza would make sense if the rates were at least $200 per night.

If you're looking to stock up on Radisson points for an award night in Helsinki, consider the Radisson Rewards Premier Visa Signature® Card. The card offers 85,000 points after you spend $3,000 within the first 90 days. You'll also get 40,000 bonus points every year you renew your card. In addition, you can earn a free night certificate valid at U.S. hotels when you spend $10,000 on the card, up to three times.

The information for the Radisson Rewards Premier card has been collected independently by The Points Guy. The card details on this page have not been reviewed or provided by the card issuer.

Once you've made it to Helsinki, you'll probably want to go sightseeing, visit a sauna or venture out to see the northern lights. One of the best ways to cover these expenses is through the Chase Ultimate Rewards travel site.

Not only do they offer competitive rates on tours and museum tickets (they are powered by Expedia, after all), but you can redeem your Ultimate Rewards at 1.5 cents each if you're a Chase Sapphire Reserve cardholder and 1.25 if you have the Chase Sapphire Preferred Card.

Another option is to charge your activities to your Capital One Venture Rewards Credit Card. Assuming your purchases get coded as travel, you can redeem miles at a rate of 1 cent each to offset these purchases. I like the second option better because you'll also earn 2 miles per $1 during the process, but be sure to compare prices and go with the option that works out most economically.

Due to year-round low fares, Helsinki might be a destination where it’s better to purchase your ticket outright and save your points for on-the-ground redemptions or premium awards elsewhere, especially given the lackluster business-class seats several airlines offer on their routes.