Articles
Darren Murph holds a Guinness World Record as the planet's most prolific professional blogger. He's an explorer at heart, having traversed nearly 50 countries and all 50 US states. He's flown over one million miles on Delta alone, and serves as a senior writer at TPG.
Follow
Aug. 12, 2019
•
13 min read 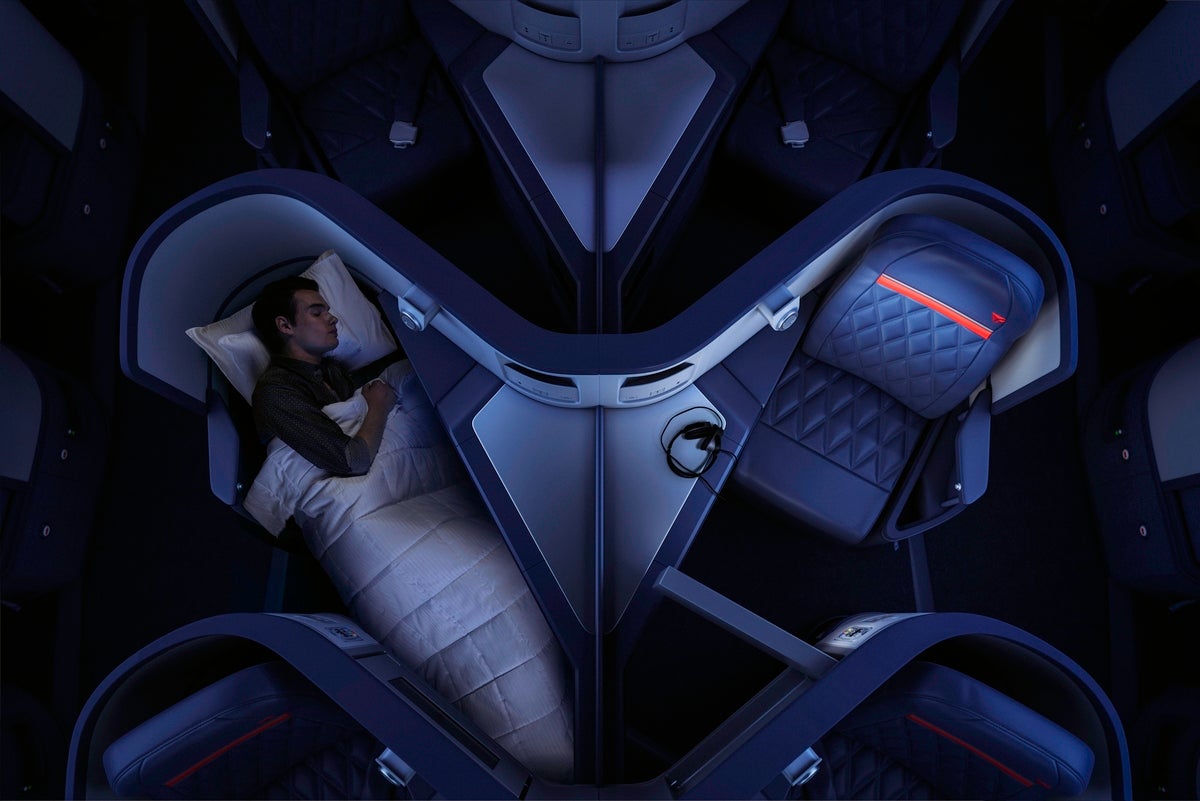 Delta’s modernization of its fleet continues to mean good things for those seeking out premium experiences — even domestically. Typically, the carrier's best cabin interiors are reserved for its long-haul international routes. Those routes, of course, demand big bucks (and significant award miles) to fly. There's a secret, though: every so often, these cabins find themselves flying domestic routes.

Perhaps Delta just needs to reposition a plane in preparation for an international leg, perhaps it's flying a special load of cargo, or perhaps it's running a rescue mission. As is the case with its 757s featuring Delta One lie-flat seats, it's competing with other major carriers like United, American Airlines, and JetBlue on coast-to-coast routes popular among business travelers.

Whatever the reason, these routes (which are often one-time events) enable you to fly in Delta's fanciest cabins for far less than you'd spend to fly overseas. And, because it's domestic, the entire experience is easier: flights are shorter, there's no passport required, and there's no long immigration line on the other side.

While its Delta One Suites are currently installed only on the Airbus A350-900 and a few retrofitted Boeing 777s, we’re keeping our fingers crossed that these birds begin to make domestic jumps in addition to their current international jaunts. Meanwhile, you’re left looking for the coveted reverse herringbone seat found on Delta’s A330-200 and A330-300 aircraft (we’ll miss you, 747-400!) and the 180-degree flatbed Thompson Vantage seat found on select transcontinental routes.

Delta's flagship Delta One seat (which isn't quite a fully enclosed suite) is being installed on refreshed 767-400ERs, also known as the 764. While it's destined for international routes, you may find one sporadically used on domestic routes as an operational space, just as we did on a flight between New York and Los Angeles.

Delta regularly updates its global timetable, shifting aircraft and routes from time to time. So, we here at The Points Guy dig into it regularly to unveil where you can find these excellent seats. Our current list covers through September 15, 2019.

Whether you splurge on a business class award or paid ticket, choose to burn a Regional Upgrade Certificate, or score a complimentary upgrade as a Medallion member, we’re showcasing how to fly on Delta Air Lines’ best business class seats without having to bring your passport.

If you're flying between Atlanta and Los Angeles, pay careful attention to the seat map when choosing your flight. If you spot a 777-200ER with four branded cabins — Delta One Suites, Premium Select, Comfort+ and Main Cabin — you'll know that's the once daily ATL-LAX flown on the refreshed jet.

While there’s no formal name for the Delta One seats onboard the airline’s newly refreshed Boeing 767-400ER, Delta did announce its intention to retrofit these cabins with new flagship interiors. Specifically, Delta claims that the updates will “bring [764 aircraft] up to flagship standards through the design, integration and production of thousands of parts, and configuring the aircraft with new lavatories, IFE and lighting systems.”

These Delta One seats are as close to a Delta One Suite as you can get, but Delta has chosen to omit the “suite” moniker due to the lack of a privacy slider. When you book a Delta One Suite, Delta wants you to know that you’re getting a fully enclosed experience.

Retrofitted 764s won’t be readily seen until late 2019. The easiest way to determine whether or not your flight will feature the new interior is to peer at the seat map. You’ll want to find 764 (as opposed to 76D) aircraft, and seat maps will show 34 Delta One seats as opposed to 40 on the old variant. The new 764s have a Premium Select cabin too, while the old version lacks that cabin entirely.

These seats are exclusively found on refurbished 767-400ER (764) jets (for now), and we shared our impressions on an early ride between New York and Los Angeles. Delta has yet to formally announce where these jets will fly. Until that changes, your best bet is to keep an eye out for operational swaps on transcontinental flights.

Regardless of which A330 you end up on domestically, you'll wind up in a reverse herringbone 180-degree flatbed seat while in the front of the cabin. One layout quirk to be aware of — the A330-200 has its exit and galley between rows 6 and 7 in the Delta One cabin, while the A330-300 fits all nine rows of Delta One ahead of the exit/galley area. Here are the routes on which DL is using these aircraft within the 50 US states:

The Delta One cabin on its fleet of not-yet-retrofitted 777 aircraft is arranged in a 1-2-1 herringbone layout and each seat has direct aisle access — in other words, no one is going to have to jump over you if they want to get up and walk around or use the restroom while you're asleep. While Delta’s 777-200LR business class has started to feel outdated, it’s still a solid product, particularly when viewed against recliner-style domestic competition.

While just the flights below are officially slotted into Delta's upcoming global timetable, keep an eye out on routes between ATL and LAX, where the 777 tends to surface on occasion. We've also spotted the 777 routed between RDU and ATL.

Delta has a gaggle of Boeing 767 variants, with effectively all of them featuring the Thompson Vantage flatbed seats that TPG reviewed on his flight between New York-JFK and Accra. When booking, make sure that the forward cabin shows the lie-flat icon, as well as one of the following aircraft type indicators:

We've carefully combed through Delta's upcoming schedule of 767 flights, with the following routes scheduled to have flat beds onboard.

The Delta transcontinental 757 seat — which TPG Reviews Editor Nick Ellis flew between Seattle and New York — falls in line with the rest of the legacy airlines. Set up in a 2-2 configuration, the seat goes fully flat, and sports an in-flight entertainment screen, USB ports and power outlets. While the seats are not private in any way and there is limited storage, they are perfectly acceptable — and even deservedly coveted — on transcontinental routes.

Be aware that while Delta has many 757 variants in its fleet, only one iteration is equipped with flat bed seating in a Delta One cabin. The rest have First Class recliner-style seats. Delta's own booking engine doesn't always reflect the proper seating at first glance, but SeatGuru provides a clearer picture of which is which. I recommend double (triple?) checking the seat selection map on Delta.com during the booking process to make sure you're booking a route with lie-flats in the forward cabin.

While Delta could retrofit any 757 in order to expand Delta One service within the United States, the following are the only regularly scheduled domestic 757 routes currently served with flat bed seats:

It's worth reiterating that these routes are also served by non-Delta One 757s, so check the seating chart before you finalize a booking. The routes shown below are scheduled to fly with flat bed seats, but equipment swaps do happen from time to time.

If you’re looking to book an award ticket on any of these routes, you’ve got options. While SkyMiles aren’t highly valued per TPG’s own valuations, you can boost your SkyMiles balance by adding a co-branded Delta Amex to your wallet.

What we’d recommend instead, however, is booking through a partner in order to score seats for less. Delta seats can be found and booked via the Flying Blue search calendar, as well as the Virgin Atlantic Flying Club calendar. Both of these portals, while they have their quirks, generally price Delta award tickets out cheaper than Delta’s own booking engine.

If you're on the fence about which card will serve you best as a Delta flyer, we've assembled a guide to help out.

Featured image by Pouya Creative for Delta Air Lines
Editorial disclaimer: Opinions expressed here are the author’s alone, not those of any bank, credit card issuer, airline or hotel chain, and have not been reviewed, approved or otherwise endorsed by any of these entities.