Delta's Final Domestic 747 Flight Was One Big Party for Medallions 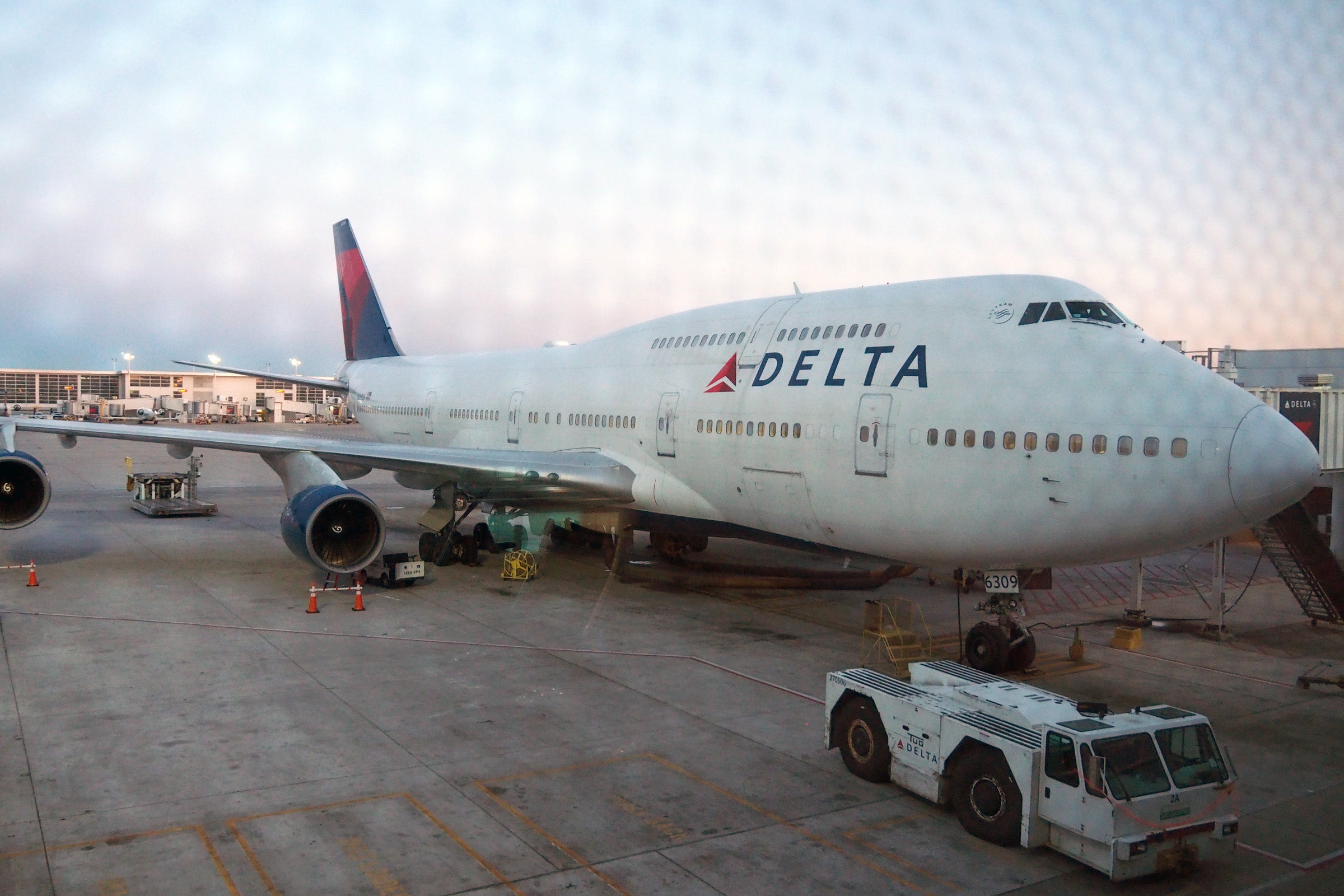 Update: Some offers mentioned below are no longer available. View the current offers here: The Platinum Card® from American Express

When United announced that it would be adding a last-minute 747 flight from Chicago to San Francisco, largely believed to be the airline's final such flight within the US, I didn't hesitate to book a ticket. Ultimately an injury prevented me from joining the "party flight," but TPG's Wallace Cotton generously volunteered to take my place.

Fortunately, another opportunity presented itself, this time with Delta. With a clean bill of health, I made my way to Los Angeles to catch DL's last scheduled 747 flight within the US, taking me from LAX to Detroit on an 11:10pm redeye on Tuesday, September 5. I usually don't manage to get much sleep on redeyes — this time I didn't plan to even try.

This final domestic flight was added to the schedule three months ago — once the flight was confirmed, word spread quickly within the exclusive Delta Diamond Medallion Flyers Facebook group, with members booking almost all of the remaining first-class seats within three hours. I met many members of the group on the flight today — quite the enthusiastic bunch!

Today's flight was operated by Ship 6309 (N669US), which began flying for Northwest in 1990 before making its way to Delta's fleet following the merger in 2010. It'll continue flying for at least a few more weeks, operating international flights from Detroit.

I spent much of my afternoon at LAX reviewing the new Terminal 5 Admirals Club, before heading to meet my family for dinner near the airport. I made it back to Delta's new Terminal 2 around 8:15pm, where I checked in quickly via a kiosk for the 11:10pm flight to Detroit.

Delta's new terminal area is clean and modern. I didn't spend much time in the main terminal area, though, opting instead to head upstairs to the Sky Club.

Just being ticketed on the flight didn't grant admission to the lounge — fortunately, a swipe of my Platinum Card from American Express did the trick.

Inside, a large section was reserved exclusively for members of the Delta Diamond Medallion Flyers Facebook group, who arranged a special meetup with the lounge weeks in advance. After asking very nicely I was allowed to come inside for some photos.

There were a variety of souvenirs for group members, including Delta 747 models and t-shirts.

There were a few left over, so I was able to buy my own t-shirt for $30 cash, netting me 0 Ultimate Rewards points in the process.

Meanwhile, the gathering was quite lively when I arrived more than two hours before departure.

There was sparkling wine available, along with pre-made cocktails.

Delta also prepared a few trays of food, in addition to the standard items available in the club.

There was a small staffed bar as well — these Diamonds did not go thirsty!

My favorite F&B component had to be the 747 cake. How cool is that?

After spending some time with the Medallions, I made my way to the showers to freshen up before the flight.

Given the excitement around this particular flight, I reached out to Delta's PR team to request early boarding so I could take some empty cabin photos. And boy, am I glad I did — I was granted nearly 45 minutes of solo time before passengers began to board, giving me plenty of time for photos.

Technicians were making their way through the cabin when I boarded, and there were only a few flight attendants on hand at that time, so it was especially quiet.

I started with the upper deck, of course, given the popularity of this unique 747 feature.

There are just 14 seats on the upper deck, making this the most exclusive space on the plane. United's 747 has 20 seats in a 2-2 configuration, by comparison.

The aisle is especially wide due to the 1-1 layout, too, which certainly came in handy once passengers began to mingle.

I then made my obligatory cockpit stop — there's a small crew rest located just behind as well.

Then I made my way back down the staircase to the main deck.

Since Delta doesn't offer an international first-class product, there are Delta One seats in the nose, too — four rows of eight in a 1-1 configuration, and two rows of six in a 1-1-1 arrangement. It's especially spacious.

Seat 1A is one of the most coveted seats on the plane, located just behind the nose cone.

I was seated in economy for the flight, but first I had to make my way through five rows of Comfort Plus.

Delta had blocked the seat map for this flight, so seats were assigned at random. I ended up in the rear of the third economy cabin and wasn't able to change my seat, unfortunately.

I did luck out with an aisle seat, though — 60D — and the two seats to my right went out empty.

After a solid 45 minutes of poking around the plane, passengers began to arrive. One of the crew members on board had spent years flying this particular aircraft, starting with Northwest. He had quite the photo album to prove it!

I popped up to the forward Delta One cabin to see what the excitement looked like during boarding. Clearly the party had already begun.

The upper deck cockpit was a popular spot too, with camera-equipped flyers lining up to get their shots of the preflight procedures.

Members of the ground crew were excited as well — a handful gathered just to close the door.

The scene on pushback was similarly moving — but 60D didn't afford the best view. Plenty of other passengers captured the farewell, though.

I knew most of the in-flight excitement would be taking place on the upper deck, just as it did on Wallace's flight. My economy cabin was a world away, though. Passengers in the back were much more focused on the seat-back entertainment than experiencing one last flight on the 747.

There were a mix of regular passengers (who had no idea they had booked a "special" flight) and aviation enthusiasts — everyone got commemorative earbuds, though.

Next, Comfort Plus passengers were offered snacks from a basket. The items were similar to those in Delta One.

Shortly after takeoff, the economy cabins went dark. For most passengers back here, this was simply any other redeye.

Unfortunately enthusiasts who had booked economy tickets were stuck in the redeye zone. Since I had prearranged access with Delta I was allowed to move around for some photos, but everyone else had to stay put. (And yes, in case you're wondering, I did feel very guilty that the other passengers weren't allowed to move from economy to Delta One for a more authentic party flight experience.)

Similarly, the upper deck was off-limits to anyone booked on the lower deck, Delta One passengers included. If you're hoping to experience the upper deck on a similar farewell 747 flight, be sure to select a seat there at booking.

The upper deck passengers seemed pretty happy to be up there, and I don't blame them: they definitely lucked out!

This also happened to be the only cabin with overhead light during the flight, though lower-deck Delta One passengers managed to improvise their own solution.

Some passengers brought along their own memorabilia to show off during the flight, such as this Northwest decanter from @GoldboxATL.

The mood was similarly festive in the nose. While economy passengers weren't permitted up front, customers seated in the second Delta One cabin could make their way up.

Smartphone lights illuminated the cabin. Not ideal for photography, but it got the job done.

There was sparkling wine on offer, of course, though it ended up being less popular than you might expect, given the celebratory atmosphere.

At least one Delta One passenger really wasn't having it, though:

After 90 minutes with the Medallion crew, I headed back to coach to check out the scene there. It was sleepy at best, so I downloaded my photos and grabbed an hour or so of unplanned shut-eye as we flew over the Midwest.

Passengers weren't able to move between cabins during the flight, but they certainly made up for it after we landed in Detroit.

The upper deck was especially popular, with dozens of passengers queued up for a chance to see the cockpit.

Meanwhile, those lucky Medallions had a surprise waiting for them in the terminal...

Delta had arranged a post-flight party in the Sky Club, with coffee and breakfast cocktails, just in case anyone was still thirsty after the flight...

The airline also handed out gift bags with commemorative pens to help mark the occasion.

Perhaps by coincidence, Delta had a soon-to-be-retired 747 and its brand-new Airbus A350 parked side-by-side near the terminal. The A350 represents the airline's latest and greatest, so it's especially notable to see these planes parked alongside one another at DTW.

As for last night's final flight, I'm absolutely glad I joined. However, the experience in coach was more or less comparable to a traditional redeye, with almost all passengers either sleeping or watching in-flight movies. With the exception of a few dozen economy travelers, it seemed that everyone sitting in back had simply booked this flight to get from A to B.

If you're thinking about coming along for an international farewell flight (either with Delta or United later this year), I very highly recommend booking a premium-cabin seat — ideally on the upper deck.