There are undeniably pros and cons to living on either coast of the U.S. While the West Coast has relatively easy access to Hawaii, one of my favorite parts of growing up in D.C. was the ease with which I could visit any of the multitude of tropical getaways in the Caribbean. You’ll find plenty of flights from all over the U.S. to various Caribbean islands, and today we’re going to take a look at the best ways to get there with points and miles.

Airlines that fly to the Caribbean

While there are over 7,000 islands in the Caribbean, today we’re going to focus on the most popular tourist destinations (read: the ones with the most points hotels) as well as the islands with regular air service. Those include:

Many of these islands feature local carriers like Bahamasair or Cayman Airways, but this post will focus on the U.S. airlines that make it easy to redeem points and miles on these routes, namely United, American Airlines, Delta, Southwest and JetBlue.

With seven destinations and five different airlines it’s too complicated to list every single route they fly, but flights to the Caribbean are primarily based out of East Coast and southeast hub cities. If you live in one of these cities you may be able to enjoy nonstop routings, otherwise expect to connect through one of these airports:

This is not an exhaustive list, and many of these routes are seasonal to reflect tourist demand.

The good news is that all the airlines listed above either use a zone-based award chart (meaning that a flight from anywhere in the U.S. to anywhere in the Caribbean would have the same cost) or a revenue-based or dynamic award chart, which means prices vary day to day and are not inherently based on the destination you choose. Let’s take these five U.S. carriers one at a time and look at the best ways to redeem miles on each of them.

If you looked solely at the American Airlines award chart, one-way flights from the U.S. to the Caribbean would cost the following amounts, with off-peak dates running from Sept. 7 to Nov. 14, and then from April 27 to May 20:

While American Airlines has gotten stingier with its saver-level award space, there’s still a good amount of off-peak availability which is quite a steal at only 12,500 miles each way.

Related: How to use off-peak pricing to save on American Airlines awards

If you’re originating in Miami (MIA), these short hops are a phenomenal value when booked with British Airways Avios. Even after a minor partner award chart devaluation earlier this year, you can still book awards from Miami to most Caribbean destinations for only 7,500 Avios each way in economy. This was a very generous decision on the part of British Airways — while ultra short routes (under 651 miles) to or from the U.S. don’t fall under the standard zone 1 award pricing, they stayed at 7,500 Avios instead of jumping to 9,000 like the rest of zone 2. Match this deal with one of the frequent transfer bonuses to British Airways, and this deal gets even better. Note that if you need to add a connecting flight to get to Miami, the distance-based award chart will make your trip much more expensive.

Delta’s dynamic award pricing makes it hard to speak in general terms about how much an award ticket should cost, as prices fluctuate day to day to match demand. For most of the schedule, 20,000 miles each way appears to be the lowest price you’ll find for economy awards to the Caribbean. However, Delta has been running frequent award flash sales this year, and at times we’ve seen flights to the Caribbean drop as low as 16,000 SkyMiles round-trip.

Any time you’re booking a Delta flight, you should always start your search on Virgin Atlantic. Not only are both airlines transfer partners of American Express Membership Rewards, but Virgin Atlantic will often charge you fewer miles for Delta flights than Delta will. Case in point, at 17,500 miles each way, Virgin Atlantic’s pricing between Atlanta (ATL) and Nassau (NAS) is 12.5% cheaper than Delta’s for the exact same flight.

The discount is even better in business class, with Virgin Atlantic charging 30,000 miles each way compared to Delta’s 40,000 and up.

United has the most limited Caribbean route network of the major U.S. carriers, flying predominantly out of Newark (EWR). United is switching to dynamic award pricing for its flights departing on or after Nov. 15, 2019, but it’s still possible to find days pricing out as low as 17,500 miles each way for economy flights from Newark to St. Maarten (SXM).

The good news is that dates with saver-level award space can be booked through partner programs like Avianca LifeMiles or Singapore KrisFlyer, which charge 17,500 miles each, or Aeroplan which charges 20,000 miles. While these partner programs don’t offer lower prices, they do offer more transfer options, including American Express Membership Rewards, Citi ThankYou Rewards and Capital One, that can make it easier to top up your account if you’re low on miles.

Related: What United eliminating Its award chart means for your credit card strategy

Southwest uses a revenue-based award chart, so the number of points you’ll need depends on the cash price of the ticket, and your points will always be worth 1.4-1.6 cents each. Much of Southwest’s great reputation was built on low fares, and it’s still possible to find one-way awards from the U.S. to the Caribbean for only 7,410 points (or $129 cash), or potentially even less. Note that almost all of Southwest’s Caribbean flights connect through Fort Lauderdale (FLL), so make sure to plan for a layover.

These cheap flights would also be a great time to use the Southwest Companion Pass, which can drop the cost for your tropical vacation almost comically low. 15,000 points for two people to fly round-trip to the Caribbean is 75% cheaper than most of the legacy carriers would charge, and a great reason to consider Southwest.

JetBlue follows the same approach, tying its award rates directly to the cash cost of the ticket like Southwest does. If you’re flexible with your dates and/or willing to stop on the way, you can find one-way awards starting as low as 11,400 TrueBlue points.

JetBlue stand out above the crowd here thanks to its Mint business class, which you can find on select flights from Boston and New York to the Caribbean. Mint features fully flat seats on an Airbus A321, including four ‘throne’ seats with closing doors. Yes, you read that correctly — private suites on a narrow-body aircraft. 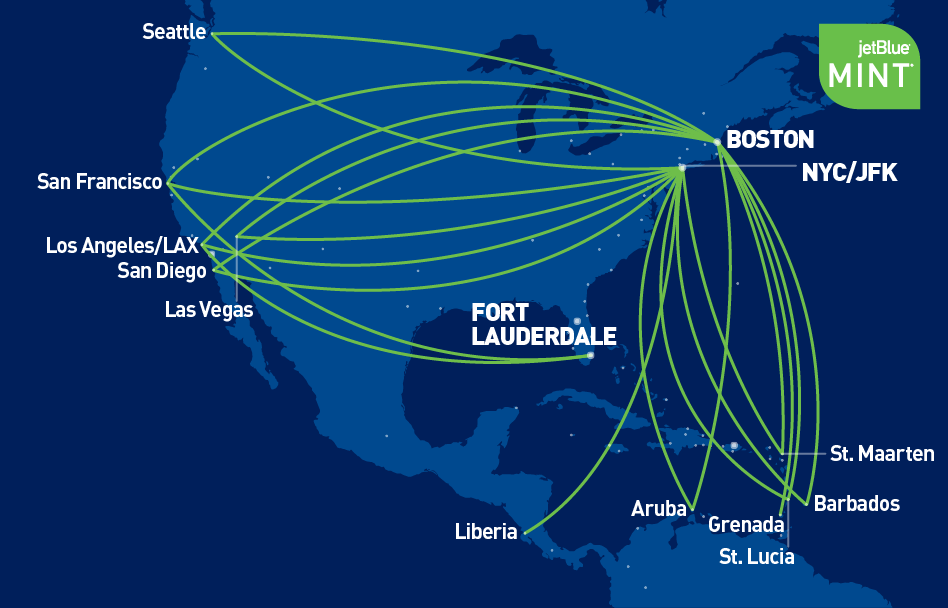 Mint tickets are significantly more expensive than JetBlue’s cheaper economy awards, but it might be worth paying up to experience the best premium-cabin flying in North America.

Related: How to earn points with the JetBlue TrueBlue program

If you need to boost your airline points and miles balances, moving points from transferable points programs is a good strategy. For example, you can transfer Chase Ultimate Rewards points to British Airways (for American Airlines flights), JetBlue, Southwest, United and Virgin Atlantic (for Delta flights) when you have the Chase Sapphire Preferred Card, Chase Sapphire Reserve or Ink Business Preferred Credit Card.

Or, consider a card like The Platinum Card® from American Express, which has a public offer of 100,000 Membership Rewards® Points after you spend $6,000 on purchases in your first 6 months of Card Membership. There’s also a targeted welcome bonus of up to 125,000 points after spending $6,000 in the first six months via the CardMatch Tool (offer subject to change at any time). You can transfer American Express Membership Rewards points to British Airways (for AA flights), Delta, JetBlue and Virgin Atlantic (for Delta flights).

While you’ll generally get a better value transferring your points to airline partners, it’s also worth keeping an eye on the cash cost of the ticket before you book. Especially in low season, cash prices on many Caribbean routes drop sharply, like this $79 one-way ticket from Miami to St. Maarten (SXM).

American Airlines would still charge you 12,500 miles for this off-peak award, but you could do much better paying with points through the Amex or Chase Ultimate Rewards portal. If you have the Chase Sapphire Reserve, which comes with a 50% bonus when redeeming your points for travel through the Chase portal, this $79 ticket would only cost 5,266 points. Amex also offers a pay-with-points rebate on two of its business cards, with American Express® Business Gold Card getting a 25% rebate on economy flights with their selected airline and all business (up to 250,000 points per calendar year) and first-class flights, and The Business Platinum Card® from American Express cardholders getting a 35% rebate (up to 500,000 points per calendar year).

There are plenty of different ways to fly from the U.S. to the Caribbean, depending on where you originate and where your intended destination is. While these are technically international flights, the short distances and narrow-body jets operating them feel more like domestic travel within the U.S. No matter which airline you earn your miles with, you should be able to find a good option for flying to the Caribbean, but remember to always check cash prices before transferring your miles over.

Ethan Steinberg has been a frequent flier for as long as he can remember. He went from studying abroad in Paris to moving to Shanghai after graduating college, where he covered all things travel in the Asia-Pacific region for TPG.
You might like
Deal alert: Bogota, Colombia, has wide open availability this fall at discounted prices
Deals
Yesterday
Revealed: The 3 most reliable airlines flying from the UK right now
News
Yesterday
Here’s how to earn 40,000 miles and Alaska’s Companion fare with this card offer
News
Yesterday