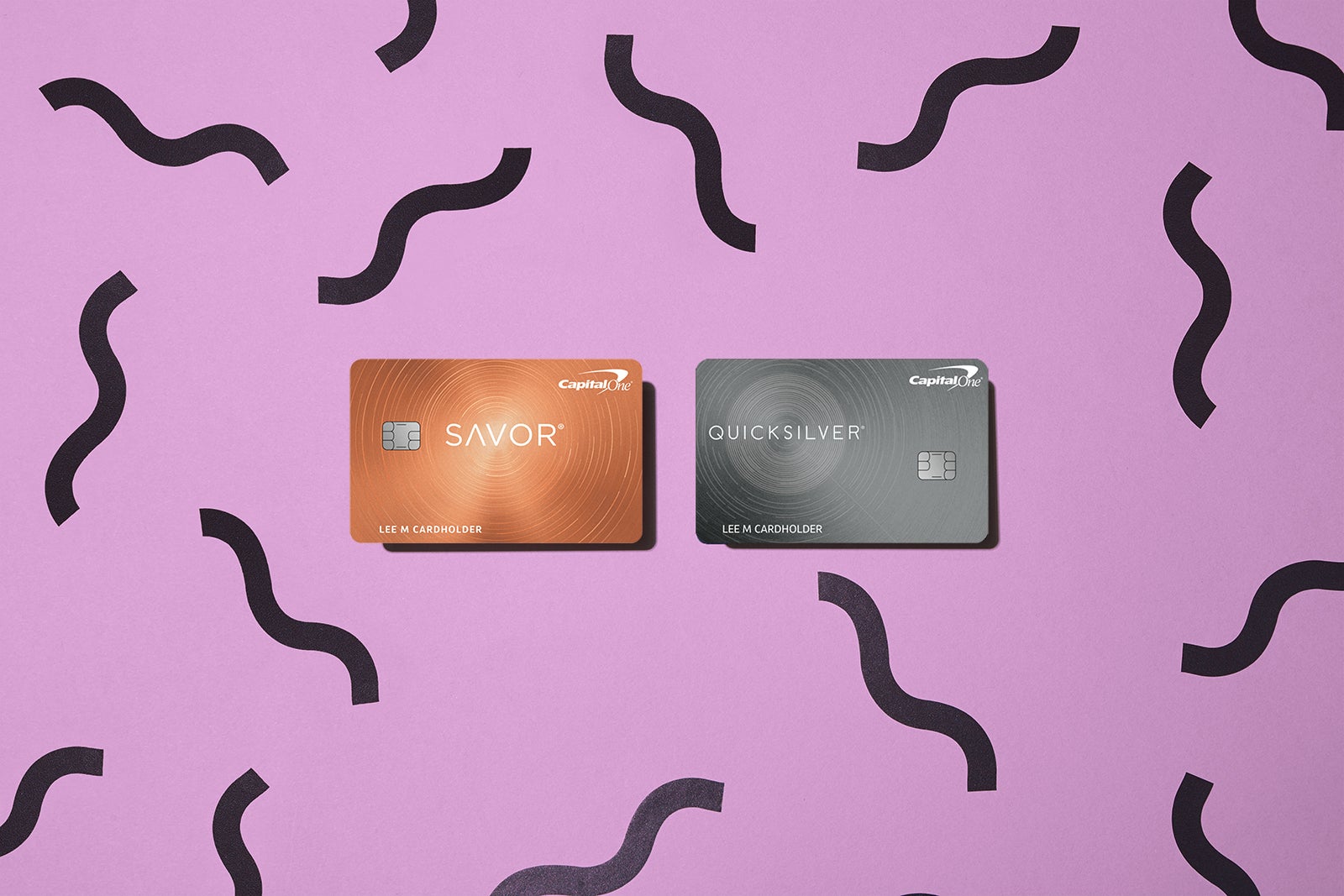 Travel rewards credit cards come in many forms. Some are co-branded with a specific airline or hotel loyalty program. Others earn transferable points, such as American Express Membership Rewards or Chase Ultimate Rewards. Cardholders can then convert them into airline miles or hotel points with a number of different travel partners.

Then there are credit cards that earn cash-back points, which can be redeemed at fixed rates toward travel and other purchases. For many consumers, these are the most useful types of travel credit cards. They take the guesswork out of earning and redeeming, and typically offer a solid return on spending.

The information for the Capital One Savor has been collected independently by The Points Guy. The card details on this page have not been reviewed or provided by the card issuer.

Now for the details on each, and factors you might want to consider if you are thinking of applying for one of them.

The Quicksilver does not have an annual fee. The Savor Rewards' annual fee is $95.

The Savor Rewards offers the higher sign-up bonus – $300 cash back after you spend $3,000 within the first three months of account opening.

The Quicksilver offers a $200 cash back — but you only have to spend $500 in the first three months to qualify for it. It is also currently offering an intro APR of 0% for purchases and balance transfers for the first 15 months (19.24%-29.24% variable APR after that), and 3% fee on the amounts transferred within the first 15 months.

If you intend to make one of these cards a primary fixture in your wallet, you might want to go for the higher bonus offer. However, if earning cash-back rewards is just a small part of a larger points strategy, you might be better off with the Quicksilver’s lower spending requirements.

Just remember that Capital One has some potentially confusing application rules that might restrict your eligibility for either card. In general, you can only have two open personal Capital One credit cards at a time. So if you have other Capital One cards open, such as the Capital One Venture Rewards Credit Card, your application might be denied. The issuer is also known to restrict consumers to opening just one new card every six months, so if you’ve applied for another product within that time frame, you might want to hold off.

Earning is another area where key differences between these two cards become evident. The Quicksilver earns a flat 1.5% back on all purchases. That is a decent rate of return and in line with competitors from other issuers such as the Chase Freedom Unlimited, but it's less than you can expect with the Citi® Double Cash Card.

By contrast, the Savor Rewards maintains a tiered earning structure that will most benefit folks whose major spending categories include dining and entertainment.

The card also earns 4% cash back category on popular streaming services, and 3% back at grocery stores, then 1% back on everything else. All of these benefits can also be used while traveling worldwide since the card does not charge a foreign transaction fee.

If you dine out a lot and attend live events, or the bulk of your credit card spending is at grocery stores, the Savor’s special earning rates will be much more beneficial. However, if you plan to use your cash-back card for other types of purchases, the Quicksilver might be the better option.

While neither of these cards offers a major slate of other benefits comparable to more premium rewards cards, they do still have a few perks worth taking note of.

Both will also get cardholders access to exclusive events such as pop-up dinners at the James Beard House in New York and concerts and sporting events at the Capital One Arena in Washington, D.C.

Which one should you get?

Which of these two cards is right for you depends on your spending habits and rewards goals.

The Quicksilver from Capital One is a great no-annual-fee option for folks who want a simple 1.5% return on their spending and tend to make purchases at a wide variety of merchants.

The Savor Rewards from Capital One is tailor-made for people who tend to spend the most on dining and entertainment — you know, the fun people — since these categories earn a fantastic 4% rate of return.

The card’s 3% back at grocery store bonus is also decent. Of course, its $95 annual fee every year you carry it is a consideration, so before you commit to this card, be sure you will get your value back in terms of return on spending.

While both cards are solid options, you might also want to consider competitors such as the Chase Freedom Unlimited, with its universal 1.5% earning rate, or the Chase Freedom (No longer open to new applicants), which earns 5% cash back on rotating categories each quarter up to $1,500 in purchases each quarter you enroll. Likewise, the Citi Double Cash earns 2% back (1% when you buy, plus 1% as you pay) and cardholders can now convert their cash back into ThankYou points if they have a linked account with a card like the Citi Premier® Card or Citi Prestige® Card. The information for the Chase Freedom and the Citi Prestige cards has been collected independently by The Points Guy. The card details on this page have not been reviewed or provided by the card issuer.

The Blue Cash Preferred® Card from American Express earns 6% back at U.S. supermarkets on up to $6,000 per calendar year, then 1%; 6% back on select U.S. streaming subscriptions; 3% back on transit and at U.S. gas stations; and 1% back on everything else. Cash back is received in the form of Reward Dollars that can be redeemed for statement credits.

Both the Savor Rewards and the Quicksilver are strong cash-back options. The former earns up to 8% back on purchases and is a particularly strong choice for consumers whose major spending categories are dining, entertainment, popular streaming services and groceries. The latter is a stable, no-annual-fee card with a fixed 1.5% return on spending that makes earning and redeeming easy.

As with any credit card choice, think about where you spend the most money and which card will earn you a better return on that spending. Then weigh that against any costs to carrying it, such as whether it will prevent you from applying for a more lucrative product in the future, or whether you will be able to make up for its annual fee with your savings. By asking a few simple questions like that, you will be able to make your choice quickly and easily.