The best for cash back for dining, groceries and entertainment: Capital One Savor credit card review

Articles
Ethan Steinberg has been a frequent flier for as long as he can remember. He went from studying abroad in Paris to moving to Shanghai after graduating college, where he covered all things travel in the Asia-Pacific region for TPG.
June 08, 2021
•
11 min read 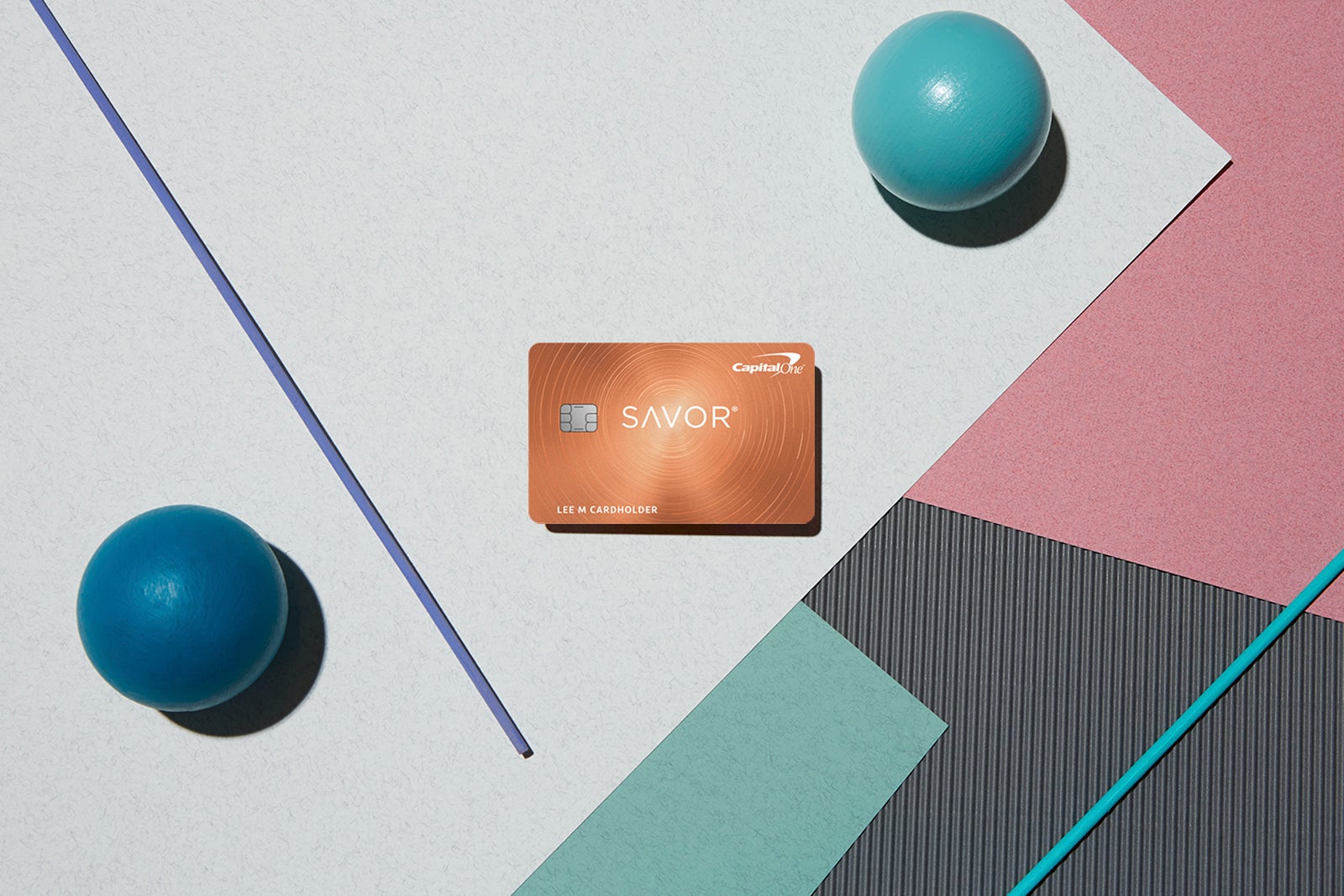 The Capital One Savor Cash Rewards Credit Card offers strong cash-back earning rates on popular and often overlooked categories, including 4% back on dining, entertainment and popular streaming services. If you spend enough in those categories to offset the card's modest $95 annual fee, the Savor card can be a great addition to your wallet. Card Rating*: ⭐⭐⭐½

Many people have come to associate credit card rewards with frequent flyer miles or transferable bank points, but every time an airline devalues its award chart (or removes it entirely in favor of more expensive dynamic pricing), fixed-value and cash-back credit cards start to look more attractive for its predictability of rewards.

Normally the biggest downside to cash-back cards is low earning rates and a lack of bonus categories, but that's definitely not true of the Capital One Savor Cash Rewards Credit Card. In this review, we'll break down every aspect of this card and assess if it's worth adding to your wallet.

The information for the Capital One Savor card has been collected independently by The Points Guy. The card details on this page have not been reviewed or provided by the card issuer.

While transferable points currencies such as American Express Membership Rewards and Chase Ultimate Rewards are still the best way to get outsized value from your credit card rewards, we've recently seen a trend toward cash-back cards that are starting to offer more competitive bonus categories. These cards, including the Capital One Savor, cater to a middle ground consumer -- those who are conscious about which credit cards to use but aren't willing to put a large amount of time into maximizing redemptions.

The Savor offers an unlimited 4% cash back on dining, entertainment and popular streaming services, as well as 3% back at grocery stores (excluding superstores such as Walmart and Target) and 1% on all other purchases. This 4% is the highest cash-back amount currently offered across all credit cards for both dining and entertainment -- two categories that many people spend significant money on.

Therefore, if the Savor card can help you squeeze an extra 1-2% back out of those purchases, it might be worth applying.

The Savor card currently offers a sign-up bonus of $300 after you spend $3,000 on purchases in the first three months. While this isn't as high value as some other cards on the market right now, it's one of the highest bonuses around for a personal cash-back card.

In other words, a $300 bonus isn't going to put this card at the top of any list. But if the bonus categories appeal to you, it's a respectable amount to help you justify adding a new card to your wallet.

Finally, Capital One also tends to restrict you to one new card every six months, including both business and personal cards. This means if you've opened a card such as the Capital One Spark Miles for Business in the last six months, you won't be eligible for the Savor. Keep these eligibility restrictions in mind to maximize your chances of approval.

Related: How bad is it to get denied for a credit card?

The Savor card doesn't offer a long list of perks like the top premium credit cards do, but there are a few worth mentioning. In addition to waiving foreign transaction fees, cardholders will enjoy secondary car rental insurance, travel accident insurance, extended warranty and complimentary concierge services (24 hours a day). Personally, I believe that premium concierge services are among the most underrated credit card perks, and I frequently use mine for restaurant reservations or trip planning advice.

Capital One Savor cardholders will also get access to premium experiences in dining, entertainment and more as part of their card membership. While many events were held virtually throughout the pandemic, we've seen past events such as the iHeartCountry Festival in Austin, Texas, the South Beach Wine & Food Festival in Miami and ongoing benefits for sports games and concerts at the Capital One Arena in Washington D.C.

With most cash-back cards today, the name of the game is simple, with uncapped bonus categories that reward you where you spend the most. This is exactly what the Capital One Savor aims to do, offering unlimited cash back at the following rates:

As the world opens up again after a long year of closures, you'll want the Savor to maximize your upcoming entertainment purchases.

A final note to remember is that the Savor card does carry a $95 annual fee, so you'll have to look at your personal spending habits and make sure you earn enough rewards to justify the ongoing fee.

One of the biggest benefits of cash-back rewards is that there's no "analysis paralysis" where you have to agonize over getting the best possible redemption value. One dollar will always be worth one dollar, so you should cash out your rewards on the Capital One Savor as frequently as possible and get that money back into your checking or investment account. Savor Rewards never expire so long as your account stays open and there's no minimum redemption amount.

When you're ready to redeem your cash back, you can request it as a statement credit or check, redeem for gift cards and charitable donations. I recommend getting a check or statement credit no matter how you plan to actually use your rewards. If you frequently purchase gift cards or donate to charity, you should put those purchases on your credit card to earn more points and use the cash-back rewards to pay your bills.

Which cards compete with the Capital One Savor?

Since the Savor comes with a $95 annual fee, you'll want to be sure that this card is worth adding to your cards portfolio. Here are three options worth considering while you're at it:

If you like the idea of the Capital One Savor card but aren't sold on the $95 annual fee, the Capital One SavorOne Cash Rewards Credit Card is a great option. This lite version comes with a marginally smaller sign-up bonus ($200 cash bonus after you spend $500 on purchases in the first three months of account opening) and 3% back on dining, entertainment, grocery stores (excluding superstores such as Walmart and Target), and popular streaming services and no annual fee. It also has no foreign transaction fees, which is a rare surprise for a no-annual-fee credit card.

While the simplicity of cash-back rewards is undeniably appealing, it's possible to get more value without spending any more money. The Chase Sapphire Preferred offers 2x on travel and 3x on dining, which TPG's valuation of 2 cents per point comes out to a 10% return on travel and 6% return on dining. The annual fee is the same as the Savor card ($95), but there's a sign-up bonus with the Sapphire Preferred of 60,000 bonus points after you spend $4,000 on purchases in the first three months from account opening. -- worth $1,200 for travel according to TPG valuations. However, keep in mind in order to get that kind of value, you'll need to do some homework by learning award charts, staying on top of award availability and so on. Cash back is generally easier to deal with than points.

If you spend enough each year in the Savor's 4% bonus categories, especially dining, to justify the card's $95 annual fee, you might be better off opting for the Amex Gold card instead. The Amex Gold earns 4 Membership Rewards points per dollar at restaurants and 4 points per dollar at U.S. supermarkets (on your first $25,000 per calendar year, then 1x. TPG values Membership Rewards points at 2 cents each, meaning that 4x is really worth 8%, or double the return from the Savor. While the Amex Gold has a $250 annual fee (see rates and fees), there are many statement credits that will help you offset this cost.

The Capital One Savor Cash Rewards Card is a strong option in the world of cash-back cards. Sure, you could get more value playing with points. But what you gain in value, you lose in simplicity.

You'll also want to make sure that you're spending enough in the bonus categories to offset the annual fee — otherwise, the no-annual-fee SavorOne card might be a better choice. But if you spend a lot each year on dining, entertainment and groceries and you're interested in a simple cash-back card, make sure to put the Savor card on your consideration list.

For rates and fees of the American Express Gold, please click here.