Then and now: 6 ways that El Al's most historic route has improved in just 2 years 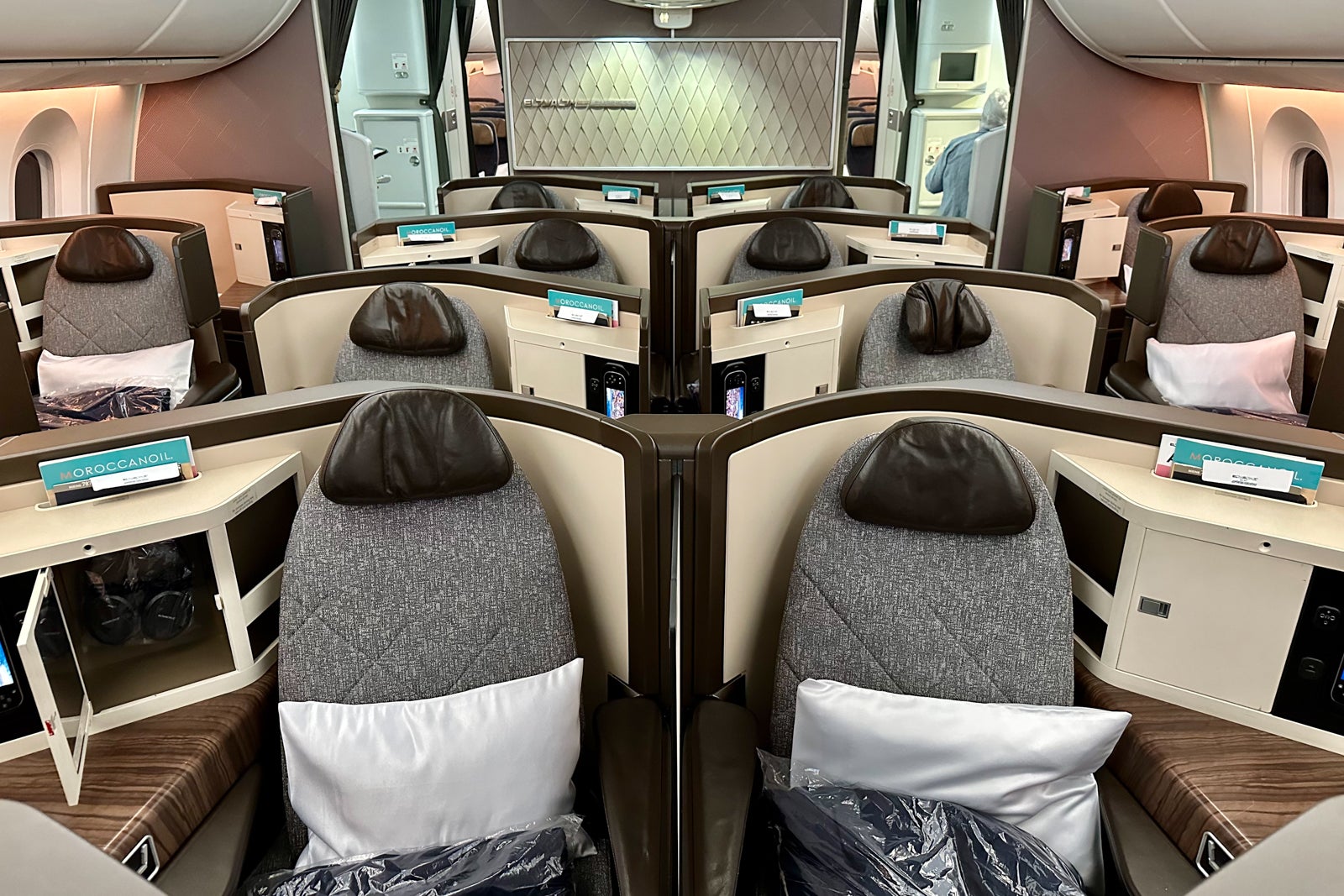 Three years ago, it was a rare sight to see an Israeli-flagged plane parked right next to a sea of Emirates' Airbus A380s.

However, in August 2020, Israel and the UAE sent shockwaves throughout the Middle East and beyond when they announced they’d be normalizing ties as part of a U.S.-brokered pact. One of the key tenets of the deal was establishing commercial flights between the two previously unconnected countries.

Four months later the day had come — and I was there to witness it all firsthand from El Al flight 977, the first commercial flight to the UAE for Israel's national airline.

And nearly two years since then, there are now up to 30 daily flights operating between Israel and the United Arab Emirates.

El Al, along with the two United Arab Emirates flag carriers, Etihad and Emirates, fly between the two countries, and there are even a plethora of ultra-low-cost carriers competing on the roughly 1,320-mile route from Tel Aviv to Abu Dhabi and Dubai.

I was recently in Tel Aviv for vacation and needed to get to the UAE for a work event. When I was figuring out how to get there, I chose to fly with El Al, since it would give me a head-to-head comparison with my experience on the same historic route nearly two years earlier.

Here's how things have changed.

The lounge is back

This two-story space is El Al's only lounge in Tel Aviv, and it features a variety of seating options, as well as a pretty extensive buffet. In addition to a range of tasty Middle Eastern salads and dips, you can enjoy freshly baked pizzas, soups and dessert cakes.

There's even a walk-up wine bar that features some local labels, such as Teperberg.

Before the pandemic, El AL partnered with the Brown Hotels group to open a pay-per-treatment spa in the King David Lounge. Unfortunately, this space is still shuttered. However, the rest of the lounge is back in business.

It's worth noting that the space can get quite crowded during peak departure banks. I'd recommend heading upstairs for a seat if you can't find one when you enter the lower level.

That said, the King David Lounge is the airport's nicest option for premium-cabin passengers, so it's great to see it open once again.

When El Al launched commercial flights to Dubai, it flew the inaugural using its short-haul workhorse, the Boeing 737-900 aircraft.

This plane featured 16 business-class recliners and 159 economy seats. While the airline continues to operate some Dubai frequencies using the 737, it's flying its flagship aircraft, the Boeing 787 Dreamliner, to the UAE as well.

The Dreamliner offers a substantially better onboard experience. The business-class pods turn into lie-flat beds, and there's even a moderately priced premium economy cabin for those looking for a domestic-first-class-style experience without breaking the bank.

Even the economy seats are upgraded with new cushioning and contoured headrests.

I booked a business-class ticket on my recent flight to Dubai, and I was overwhelmingly impressed with the Recaro CL6710 product. I was assigned a window-adjacent solo pod, which featured plenty of privacy and storage.

Given the flight's 5:30 a.m. departure time, I had no trouble catching up on some sleep after converting the seat into a bed.

The Dreamliner's onboard experience was a night-and-day difference relative to the El Al inaugural I took two years earlier. If you're planning to fly the route, I'd highly recommend selecting a frequency operated by an El Al 787.

However, it's not just El Al that's deploying its fanciest planes on these routes. Emirates now flies daily between Tel Aviv and Dubai on a Boeing 777-300, while FlyDubai operates some flights with its lie-flat-equipped Boeing 737 MAXes.

While Emirates definitely offers the best overall premium experience with its first-class product, the 2-3-2 business-class configuration pales in comparison to El Al's 1-2-1 configuration, which offers direct aisle access at every seat.

Another welcome improvement that I experienced on my recent El Al flight to Dubai was the introduction of fancier amenities.

Perhaps it was because my flight was operated by a Dreamliner, which normally flies longer-haul missions, but waiting at my seat during boarding was El Al's signature pillow and duvet made by Hollandia.

I even received a L'Occitane-branded amenity kit, which included a treat for aviation enthusiasts — a pair of airline-branded socks bearing the airport codes of an El Al route. (I received the bright orange Tel Aviv-to-Hong Kong pair.)

I also appreciated the small tubes of hand cream and lip balm, as well as the single-use refreshing towel.

When I flew the route back in 2020, I received an unbranded amenity kit, stocked with socks, earplugs, a toothbrush and an eye mask.

Inflight entertainment for all

In addition to the fancier seats on the Dreamliner, every flyer in all cabins got to enjoy a much better inflight entertainment offering.

Each seat is equipped with a high-definition entertainment screen, which is loaded with a selection of movies, TV shows and games. The moving map is highly customizable, and it even features a new view that displays Jewish prayer times according to the aircraft's present location.

El Al’s 737s don’t have built-in seatback entertainment. Instead, the carrier installed tablet stands in business class that fold out from the center console. Those sitting at the pointy end of the plane receive an iPad loaded with movies and TV shows for use during the flight.

At the moment, only El Al's Dreamliners and Boeing 777 aircraft feature Wi-Fi connectivity powered by Viasat satellites. While that would theoretically represent an upgrade over the unconnected Boeing 737 I flew back in 2020, El Al doesn't yet offer internet service on routes east of Israel.

That's because Viasat hasn't yet launched its third-generation satellite that's set to provide global connectivity. However, it's worth mentioning that I've received rave reports from readers about El Al's internet service on transatlantic flights. Full flight plans that support streaming cost $24.99 on routes to North America.

Along with Israel dropping all COVID-19 restrictions, El Al has also brought back its full onboard meal service, which I thoroughly enjoyed on my recent flight.

The breakfast entree options were either a tomato and cheese omelet or blintzes. I went with the latter, which was delicious.

The featured dish was served with a side of pickles and tomatoes, some Middle Eastern dips and salads, two miniature loaves of bread and a cheesecake dessert.

While the food itself was tasty, I also appreciated the stylish crockery and the great presentation of all the meal contents.

Back when I flew in 2020, no hot food was offered, and the meal — shown above — was presented with the plastic covering intact. Even the bread rolls back then were individually wrapped, so the improvements to the meal service were especially noticeable.

As the crow flies, getting between Tel Aviv and Dubai requires flying right over Saudi Arabia. That posed a problem for El Al since the Kingdom historically didn't allow Israeli-registered aircraft to use its airspace.

Without overfly rights, Israeli aircraft would need to fly over the Red Sea and around the Arabian Peninsula to get to and from Dubai, tacking on extra hours and unnecessary fuel burn. However, UAE-based aircraft could transit over Saudi Arabia, putting Israeli airlines at a significant disadvantage.

Before flights were launched between Israel and the UAE in 2020, government authorities worked to secure these overfly rights with Saudi Arabia.

They did, but with a big condition — the overfly rights only applied to routes to and from the UAE and Bahrain. Other flights, like El Al's service to Bangkok and Phuket, would still need to divert around Saudi Arabia.

Two years later, however, there's been more diplomacy in the skies. Earlier this year, Saudi Arabia opened its airspace to all Israeli aircraft under a pact brokered by the Biden administration.

This not only is good news for the commercial feasibility of El Al's UAE routes, but it also unlocks some key growth opportunities for the airline, including possible destinations in India and beyond.

However, the feasibility of these routes is dependent on Tel Aviv also receiving overfly rights from Oman, which is still a work in progress.

For me, flying between Israel and the UAE on a nonstop El Al flight is still quite surreal.

I'm fortunate to have taken the inaugural commercial flight between these two countries during the height of the pandemic in 2020, and I was still excited about the opportunity to fly the route again two years later.

This time, the experience was significantly more pleasant. For one, I didn't have to worry about onerous COVID-19-related restrictions.

Also, the flight itself — from the time in the King David Lounge to the Dreamliner's impressive onboard experience — was so much better than round one.

The next time I fly the route, I'd love to give Emirates first class a try. However, with an outdated 2-3-2 configuration in business class, El Al's Dreamliner definitely feels like the way to go in if you're flying in business.