Lie-Flat to the (737) MAX: A Review of FlyDubai's Business Class 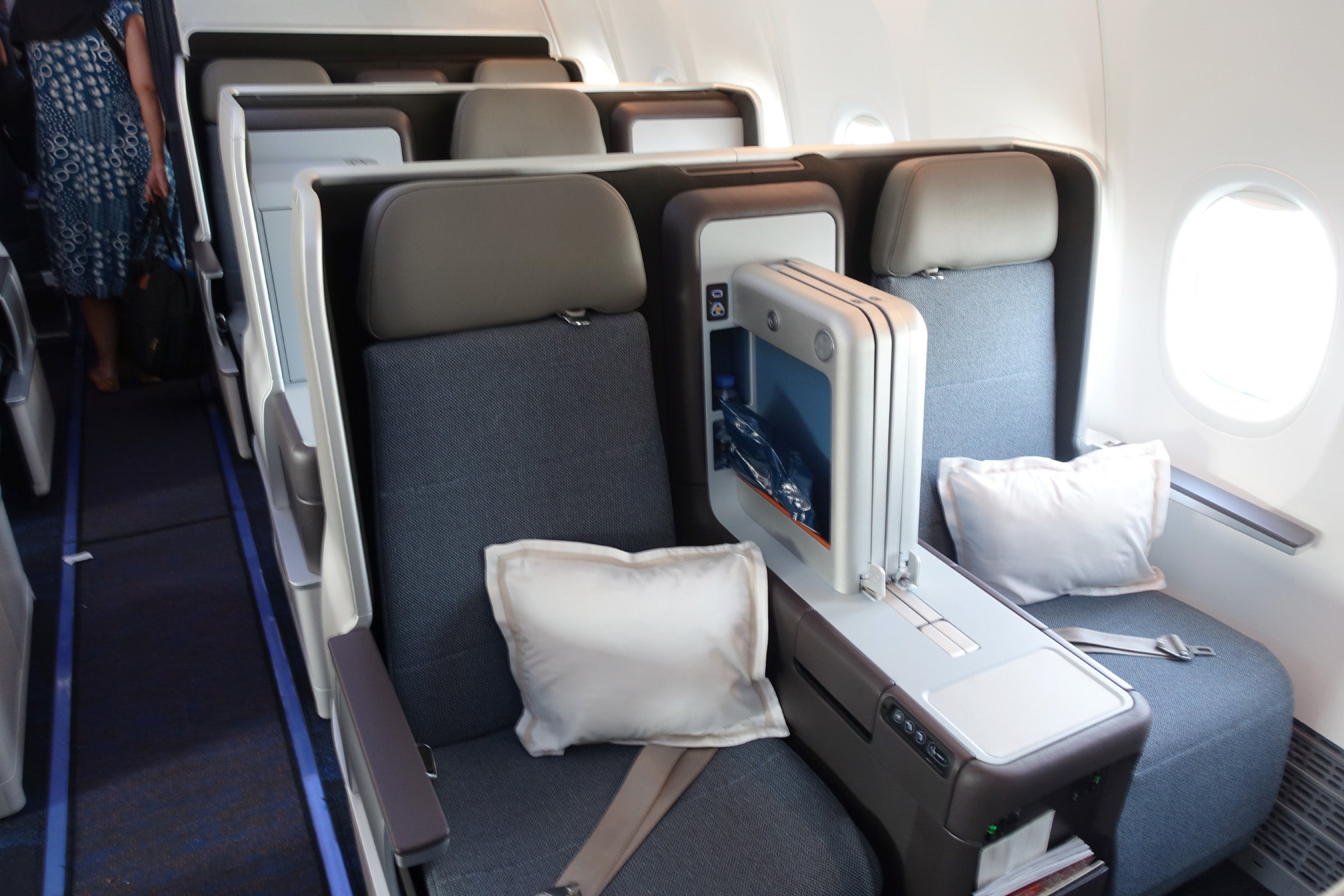 When it comes to traveling through Dubai (DXB), one carrier is always first to come to mind: Emirates, obviously. But the Government of Dubai — the parent "company" of Emirates Airline — has also invested significantly in EK's low-cost counterpart, flydubai.

Considering that I had yet to experience flydubai, paired with the fact that the carrier is now flying Boeing's new 737 MAX with lie-flat seats in business class, I decided to route my most recent trip through DXB for a chance to take this growing government-owned airline for a spin.

While most customers decide on a route before even considering which airline or aircraft to fly, I had to work backwards to accomplish my unusual mission — first choosing the airline and aircraft, and then figuring out which route to book.

The price for my one-way ticket to BEG? $1,810. Yes, really. Nearly $2,000 for a "low-cost carrier" business flight to Europe. I'd have a private lie-flat seat, sure, but considering you can book Emirates' incredible first-class suite for $700 more (down from the ~$3,000 I paid last year), if it hadn't been for the review, there's no way I could have possibly justified this booking.

My preference would have been to redeem miles, of course, but it's not easy to earn miles in the airline's OPEN program without traveling on flydubai or a partner. And the redemptions are tied to the cash price of the ticket — my flight would have required nearly 270,000 OPEN points, which of course I didn't have. Keep in mind, though, that flydubai's OPEN program will be ending and as of August 1, 2018 the carrier will adopt Emirates' Skywards program.

The saving grace here is that since TPG's still eligible for Amex’s 50% Pay With Points rebate, thanks to his Business Centurion Card, we were able to book the flight using about 90,000 Membership Rewards points. That's still an awful lot to spend, but it beats paying out of pocket.

Since it was technically a paid ticket, I earned redeemable and elite-qualifying miles as well.

By my calculations, OPEN points are worth about 0.6 cents toward the paid cost of a flight, so the reward points I earned can be valued at around $84. While that won't get me back to Europe, it's almost enough to cover the cost of a one-way economy flight to a destination close to Dubai, like Muscat, Oman (MCT).

One major advantage of traveling on flydubai is that the airline operates out of DXB's Terminal 2. It's not nearly as flashy as Emirates' Terminal 3, but it's also far smaller, making it possible to show up at the airport much closer to your departure time.

I was through check-in, security and immigration in about five minutes. Although there was a designated business-class check-in area, the economy section didn't have any lines, so my biz-class ticket didn't end up saving me any time.

The terminal has a modest selection of fast-food restaurants, plus a large duty-free store. I wouldn't plan to spend any more time there than you need to.

The gates were all arranged in a line in one enormous departure lounge. It was crowded, but there were still plenty of seats to grab.

As a business-class passenger, I had access to the flydubai lounge. Economy travelers can also use the lounge if they've reached the Gold tier in the airline's OPEN frequent-flyer program.

The lounge was split between two levels. I spent most of my time upstairs, since there was only one other passenger in that entire section.

The second floor was home to the bar, but they didn't seem to be serving alcohol, which made sense given that it was 8:00am.

The dining area was on the ground level — that's where almost all of the lounge guests were hanging out.

The breakfast spread was decent, but I had already eaten at the hotel, so I only nibbled on a couple things.

There was a variety of Middle Eastern salads, plus a build-your-own salad bar.

While the cold items looked and tasted fresh, I couldn't say the same for the limited hot buffet.

Wi-Fi was speedy and free — while there wasn't any connectivity on my flight, at least I was able to wrap up some work in the lounge.

Flydubai only boards via bus gates, which is annoying for sure, but it gave me an opportunity to try out the dedicated "Business Boarding Gate" area, located at the beginning of the terminal.

There was another small breakfast spread there, with pastries, fresh dates, coffee and other non-alcoholic beverages.

The business boarding area was fairly empty during my visit — it's really designed to get passengers through and to their plane as quickly as possible.

Each flight has its own dedicated bus, and with so few passengers eligible for access, I imagine you'll have a much more peaceful ride than if you'd left from the main gates.

Unfortunately, even though I asked the staff to confirm that business-class passengers board first — which is important when you're trying to take pictures of an empty cabin — we actually ended up being the very last to board. There were even some passengers already seated in business class, including the two pilots who would be operating the return flight from Belgrade.

My flight was operated by A6-FME, which at the time of my flight was roughly six months old, having been delivered in December 2017.

The most notable component of flydubai's 737 MAX business class is the seating in the second row — while rows 1 and 3 have two seats on each side, due to the staggered arrangement there's only one seat on each side in Row 2. These are the same seats you'll find in JetBlue Mint, but in this case the "suites" don't have sliding privacy doors.

All of the seats are comfortable and fairly private, especially considering that they're used exclusively for short- and medium-haul flights. There's no question that solo travelers will have far more privacy in the second row, though.

Since I was traveling on a 737 MAX, I was especially curious about the lavatory situation.

I didn't manage to see the economy lavs in the rear, and while the business-class restroom was small, it didn't have the sink issues I experienced on United.

Back out in the cabin, I originally accidentally made my way to seat 2B, on the port side, even though I had selected 2E across the aisle. Unfortunately once I realized my mistake there wasn't any way to get a clear picture of my seat, since the cabin was full, but it's more or less identical to 2E below.

The seat controls were especially basic — that's great if you don't know what you're doing, but in my case it meant that it was a bit challenging to position the seat exactly the way I wanted it.

Going in to full lie-flat mode was easy, though — while I wasn't planning to sleep on our daytime flight, I'd certainly never object to having the option.

The footwells are quite compact in the solo seats, since you're essentially sliding your feet between the two seats in front. It wasn't a huge issue, but taller travelers should take note.

There was abundant storage, though — far more than you get in the paired seats in rows 1 and 3.

I had both a large cabinet above the side table, and another storage area beneath the other armrest.

There was a third compartment to the side of the seat — a water bottle and headphones were waiting there when I arrived.

That ended up being a great spot to store my iPhone and glasses, too.

As with all 737 MAX planes, flydubai's variant has Boeing's Sky Interior, as you'll find on recent 737-800 and -900s as well. There were also individual air vents, which I very much appreciated.

With exclusively short and medium-haul routes to Africa, Asia, Europe and the Middle East, even flydubai's longest flights (like DXB to HEL) barely approach the seven-hour market. It's not a huge surprise, then, that the airline doesn't offer much in the way of amenities. I didn't receive an amenity kit, though I did get a larger pillow and blanket (pictured in the bed shot above) than I'd expect to find on US flights of a similar length.

Really, the only "amenity" I received was a pair of lousy noise-canceling headphones, which I quickly abandoned in favor of my Bose earbuds.

I was pleasantly surprised by the content selection — it's by no means as diverse as Emirates', but there was still a decent mix of Hollywood, Bollywood and other international flicks to pick from.

The system worked well — movie picks appeared right away, and it was easy to jump ahead in Black Panther to pick up where I had left off on another flight.

The moving map was sharp and responsive, too.

There wasn't any live camera feed to speak of, as you'll find on Emirates' planes, but I managed to see quite a bit of Dubai just by looking out the window.

Shortly after boarding, I was offered my choice of juice or water from a tray, and went with apple juice. Flydubai serves Taittinger Champagne in business class, but I didn't see anyone drinking it on my flight, and wasn't in the mood for any bubbly myself.

After takeoff, I was offered a second beverage, and asked for a bloody Mary, which was served with some delicious veggie chips.

For breakfast, I requested the Arabic mezze, but there were only two on board and they had been claimed by passengers in the first row. Scrambled eggs and crepes were the two remaining options, so I went with the eggs. The fruit and yogurt were delicious, but the hot dish wasn't good at all.

The service was pretty disappointing as well — after boarding, I requested a blanket, which the flight attendant seemed reluctant to provide. And the plastic wrappers from the blanket and headphones sat in a small pile on the side console of my seat for about 45 minutes before a flight attendant finally took it away. Crew members walked past it dozens of times, and definitely noticed that it was there. They also took their time collecting my breakfast tray.

I was offered a warm chicken wrap just before landing, which was a nice surprise, given that there hadn't been any mention on the menu.

I enjoyed my fight on flydubai's new 737 MAX. While the lounge, service and catering left a lot to be desired, the seat itself was fantastic for a narrow-body plane.

Of course, the question in this case is whether or not I'd pay $1,810 for the privilege of joining flydubai for another medium-haul hop. The answer, of course, is a resounding "no," although once the carrier adopts the Emirates Skywards program it'll likely be far easier to book award flights. Assuming there are decent award options, or Emirates connecting fares, I wouldn't mind flying this 737 MAX again.