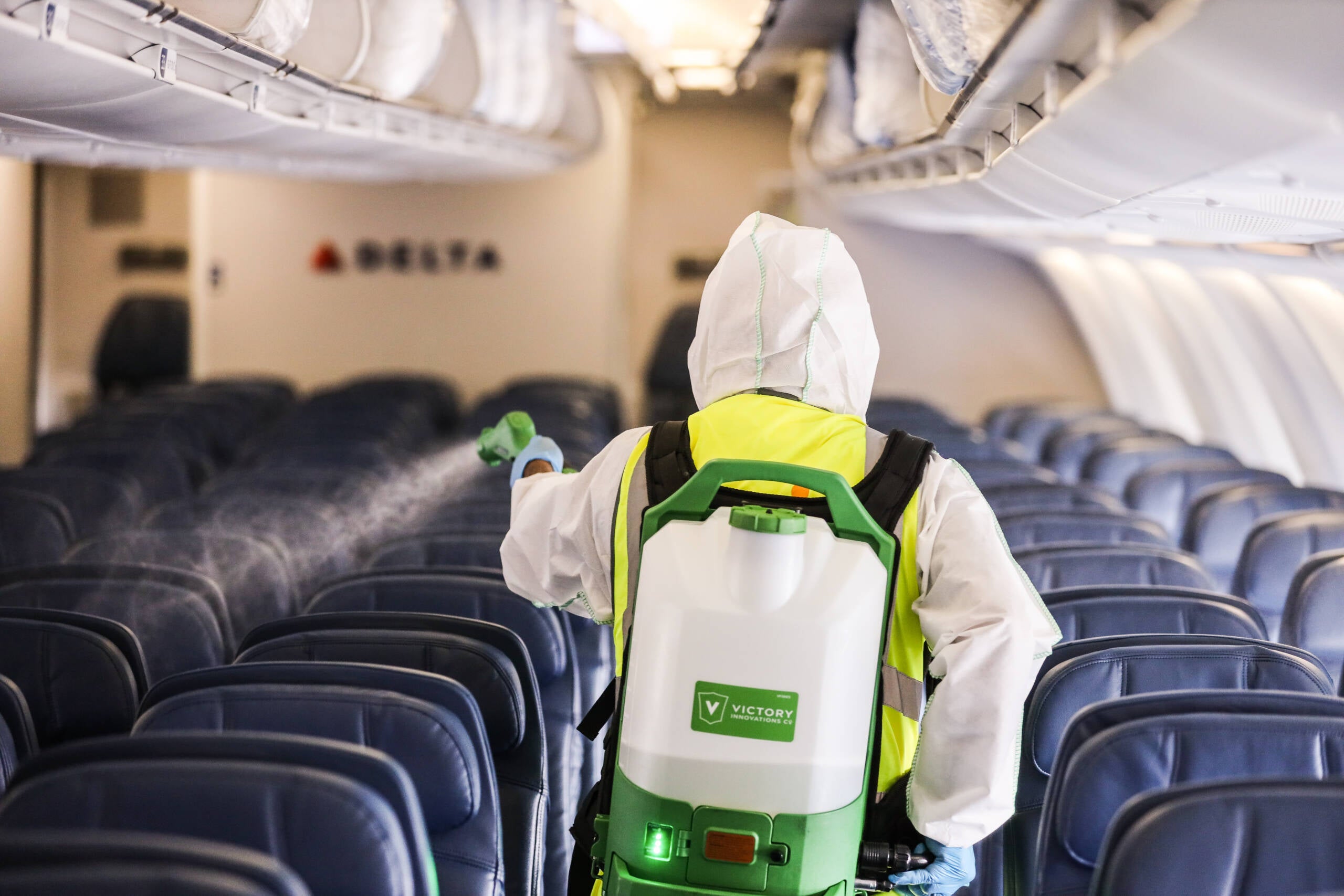 It certainly qualifies as a cliché at this point, but the coronavirus pandemic has had an unprecedented impact on airlines.

Revenues have plummeted — at one point, U.S. carriers were burning as much as $100 million a day. At the same time, public health experts have suggested expensive precautions, like enhanced cleaning, and, for carriers that choose to take the extra step, limited capacity.

Airlines have implemented a number of precautions to improve safety within airport terminals and onboard their planes. COVID-19-related measures include:

Other measures could make an impact as well, such as flexible booking policies, giving customers an opportunity to change or cancel their travel plans if they aren't feeling well.

Precautions have evolved as we've learned more about the virus and how it spreads, leading airlines to add some measures — like mask mandates — and scale others back. That's understandable, of course — as the saying goes, hindsight is 20/20.

Here, as part of Airlines Week at the 2020 TPG Awards, I'll run through some of the top U.S. airline precautions, giving you an idea of what to expect onboard, and which airlines have been leading the way.

Today, few reasonable travelers debate the effectiveness of masks, but during the early stages of the pandemic, many organizations — including the U.S. Centers for Disease Control and Prevention (CDC) — advised against wearing a mask.

In early March, had we received the guidance we have today, airlines would have likely implemented mask requirements far sooner, focusing their efforts on mitigating passenger and staff exposure to aerosol transmission — a task where, as we've learned, airplanes really excel.

It was still several weeks before passengers were required to wear masks, though — during a time when carriers were competing aggressively for the small number of customers willing to fly, none seemed eager to alienate travelers with such a "controversial" move.

JetBlue was first out of the gate, with a passenger face-covering announcement at the end of April. Delta and United quickly followed, with all three carriers requiring flyers to cover up beginning May 4. All U.S. carriers implemented similar policies over the next few weeks, with Allegiant lagging far behind, permitting passengers to wear face shields instead of effective coverings for many more months.

Of course, mask mandates aren't nearly as effective if they aren't enforced. While I continue to hear accounts of passengers avoiding masks during flights, airlines have generally empowered their employees to enforce requirements, going so far as to ban customers who choose not to comply.

JetBlue made waves with an early pandemic-related ban — a passenger who traveled while ill on Mar. 11 and later received a positive COVID-19 test result will not be welcome on future JetBlue flights.

Over time, Delta has proven to be the most strict in this regard, having banned some 460 passengers for noncompliance to date. U.S airline mask-related flying bans break down as follows:

These figures don't paint a complete picture, however — some airlines operate far fewer flights than others, and Allegiant had an especially lax policy until recently. Note that American and Southwest declined to provide details, while Spirit and Sun Country did not respond to TPG's request.

While Delta is largely credited with kicking off a blocked-seat trend, after the airline announced it would suspend the sale of middle seats in early April, JetBlue had effectively been blocking middle seats since late March. Initially, the carrier capped seat sales at 66% and proactively moved passengers out of middle seats before later formalizing the program, preventing flyers from selecting the middle. It will continue to restrict capacity through Jan. 8, 2021 — though with higher percentages as the December holidays approach.

Delta's seat blocking has been the most widespread, though, and even extended to long-haul Delta One cabins for several months. First-class passengers on narrow-body planes don't have to worry about sitting next to a stranger as well — at least through the holidays.

Hawaiian Airlines has also been blocking middle seats and aisle seats on smaller planes, as has Alaska, though the Seattle-based carrier notes that middle seats may be assigned to make room for extra passengers if the airline needs to rebook them from a canceled flight.

American Airlines did block some seats beginning in April, with 50% of middle seats blocked from sale through the end of June, but the airline never promised that you wouldn't be seated next to a stranger, limiting the policy's appeal.

Adding to the confusion, several airlines added their own fun twist. In April, United famously emailed passengers, stating "We’re automatically blocking middle seats to give you enough space on board" — without actually following through. Meanwhile, Frontier, in typical ultra-low-cost-carrier fashion, enabled customers to distance for a fee — the practice even drew attention in Congress, and was quickly abandoned.

While mask mandates are likely to provide more protection than aircraft cleaning, all airlines have modified their procedures, with the larger U.S. carriers implementing electrostatic fogging between all flights. Low-cost carriers, where quick turns are core to the business model, may reserve deep cleans for overnight periods, choosing instead to focus on key touch points — like lavatories and tray tables — for quick outstation cleanings.

Ultimately, if you're concerned about the cleanliness of your aircraft, it certainly doesn't hurt to give your area a thorough wipe-down once you're onboard. Amenities vary from carrier to carrier — Delta is leading the way in providing sanitizing wipes to all passengers and installing hand sanitizer stations near each lavatory, though even low-cost carriers are making essentials available, as with Allegiant's free health and safety kit, which the airline began offering in April.

All U.S. airlines have implemented a variety of safety-related procedures, from mask mandates to seat-blocking to more frequent deep-cleans, but no airline has moved as swiftly or as aggressively as Delta — which is our pick for this year's "Spotlight on Safety" editors' choice award.

From the beginning of the pandemic, Delta was my top suggestion when anyone asked which carrier was safest to fly. From quickly adding electrostatic spraying before every flight to committing to blocking middle seats through early 2021, the airline has led with a smart, flyer-friendly approach from the very beginning of the COVID-19 pandemic.

It's this consistency and dedication to minimizing a flyer's risk of contracting COVID-19 that makes Delta Air Lines our pick for this safety-related component of the 2020 TPG Awards.

JetBlue absolutely deserves a mention as well, as a clear runner-up. The airline similarly moved quickly to require masks, improve cleaning and block seats. Its latest seat-blocking practice falls short of Delta's scaled-back approach, however, as do its cleaning procedures, which don't include electrostatic spraying before every flight.

As airlines begin to shift away from blocked-seat policies, citing studies and other safety-related reports, it can be easy to declare the move as unnecessary.

Whether or not that's actually the case remains to be seen, and it certainly wasn't clear when these policies were put into place — Alaska, Delta and JetBlue moved swiftly to block middle seats and keep passengers safe (with Hawaiian and Southwest later following suit), prioritizing even a small potential public-health boost over short-term revenue goals.

Other measures like booking flexibility and mask mandates have all likely played a role in reducing the spread of COVID-19. Thorough cleaning may also contribute — it could be possible to contract the virus after touching a tray table or another onboard item that an infected person recently came into contact with — and will certainly have an impact in mitigating the spread of other viruses and bacteria as well.

There's no question that direct person-to-person transmission poses the biggest risk, however, making mask mandates by far the most effective method of limiting aerosol transmission onboard planes. It remains absolutely essential to wear your mask at the airport and for the duration of your flight. Public health, and the future of your airline and the travel industry at large, depend on it.