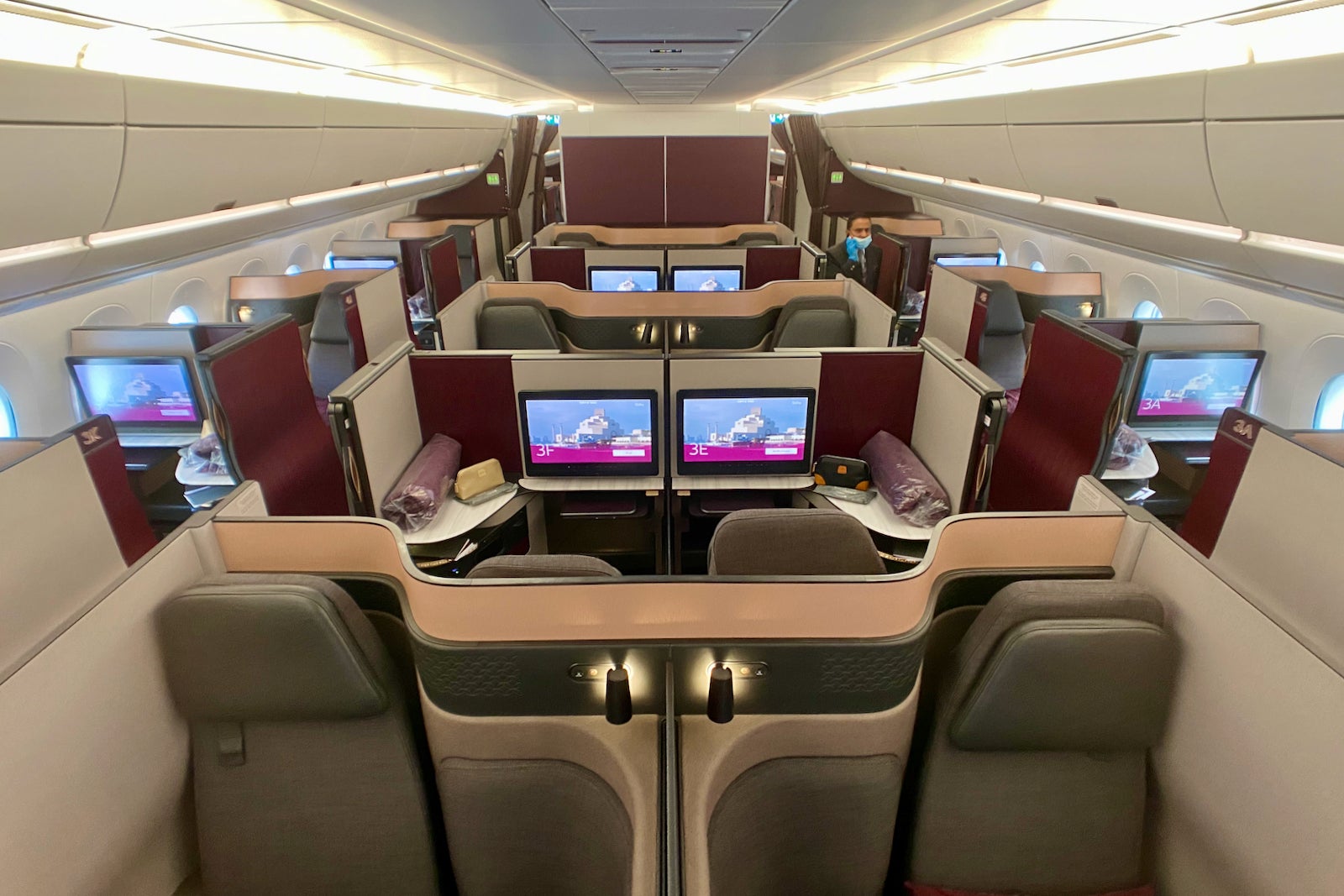 Flying Qatar's Qsuite business class on the inaugural San Francisco flight
This post contains references to products from one or more of our advertisers. We may receive compensation when you click on links to those products. Terms apply to the offers listed on this page. For an explanation of our Advertising Policy, visit this page.

Tuesday marked a big day for Qatar Airways. The Doha-based carrier began flying to its fifth new destination - San Francisco (SFO) - since the outset of the pandemic.

For U.S.-based flyers, this one was big since it’s the carrier’s ninth destination to the country. Personally, the timing couldn’t have been better, since I’d just arrived in Dubai two days before the Qatar inaugural, after flying El Al’s historic first flight to the United Arab Emirates.

Flying two inaugurals on one trip sounded great on paper, but it’d require an eight-hour journey between Dubai and Doha via Amman. (Nonstop flights were eliminated back in 2017 when diplomatic relations were cut between the two countries.)

Well, it all worked out, and what follows is my experience flying Qatar’s first 8,087-mile hop from Doha to San Francisco in Qsuite business class. TPG paid for a coach ticket but was upgraded for free by the airline.

My time in Doha began at the Al Mourjan business-class lounge, located one level above the departure hall. Plenty of staff were waiting to greet eligible flyers, and I was inside within minutes.

While 6 a.m. is usually rush hour at Doha’s Hamad International Airport, the lounge was much quieter than normal, likely because of the reduction in demand due to the pandemic.

There were plenty of seats spread out across multiple distinct areas. Two were dedicated to eating and four to lounging. There also were two game rooms, two quiet zones, a business center and more.

I spent a few minutes walking around the space and admiring the dramatic spiral staircase built into the massive rectangular water installation.

Before long, it was time to head to gate C1, not before stopping to snap a photo of the 23-foot-high teddy bear looking down upon departing passengers.

Instead, there was a large poster marking the first SFO-bound flight, which proved to be a great photo opportunity for the very few flyers who knew this was an inaugural.

“I searched for flights to the Bay Area, and this one popped up,” one business-class passenger told me once onboard. I didn’t poll all 200 or so passengers, but that was seemingly the sentiment of the majority, judging by their facial expressions.

As passengers boarded, each received a celebratory, individually wrapped vanilla cupcake. Most were just happy for the extra dessert, even if they didn’t appreciate the launch's significance.

For Qatar, however, SFO marks the beginning of a West Coast-focused expansion, with a new nonstop route to Seattle (SEA) slated to begin in March 2021, joining existing daily service to Los Angeles (LAX) and now five weekly flights to SFO. (The carrier has already boosted the frequency due to increased demand.)

Qatar is also teaming up with its soon-to-be Oneworld alliance friend, Alaska Airlines, to boost connectivity within the region and give frequent flyers reciprocal earning and burning possibilities.

Before settling in for the nearly 16-hour journey, it was time to photograph the 36 Qsuites split across two cabins on the two-year-old Airbus A350-900 registered A7-ALZ.

The first features six rows, while the mini-cabin behind Door 2L has just three rows — my personal preference, especially during the pandemic, for its added privacy.

Though business class is arranged in a 1-2-1 configuration, not all seats are created equal. Each is designed for a different type of traveler.

Those who are flying solo should select one of the window seats. Odd-numbered rows have rear-facing seats that are flush against the window, offering the most privacy from other passengers.

Even-numbered windows are forward-facing, and the seat itself is closer to the aisle. Not a huge deal, though, since every Qsuite is fully enclosed by a sliding door.

The middle seats have multiple different configurations, depending on your traveling party.

If you’re flying as a couple, select the two middle seats in an odd-numbered row to create a “double bed.” Though there’s a privacy partition between the seats that must be raised during taxi, takeoff and landing, it can be lowered once airborne, allowing you to sit right next to your companion.

If you’re traveling as a group of four, you can create your own "quad bloc" using two rows in the center section. The privacy divider between the rows opens to create a co-working or leisure space for groups traveling together.

A subtle yet noticeable feature on Qatar's A350 is the lack of overhead bins above the center biz seats, making the cabin feel roomier and more spacious.

Another feature (for aviation enthusiasts, at least) that might go unnoticed is the window in the port-side lavatory at the front of the forward biz cabin.

Inaugural and other monumental flights typically receive a water-cannon salute from airport fire trucks. To conserve water, that was scrapped in both Doha and San Francisco. Interestingly, multiple fire trucks were awaiting our arrival in SFO, but instead of a water salute, it appeared that there were cameras hoisted to the ladders to snap pictures of the arriving plane.

I played around with the 21-inch Oryx One inflight entertainment system as we taxied toward Runway 34R. Though there were over 300 first-run movies and TV shows, I landed upon my favorite form of entertainment — the tail-mounted camera.

The high-quality feed made for some great pictures during both the first-ever takeoff and landing for Qatar Flight 737 between Doha and San Francisco.

Once airborne, it was time for a meal and some sleep. Though the a la carte menu is available anytime, I opted to eat just after takeoff — after all, photographing the cabin really worked up my appetite.

Over the course of the flight, I sampled quite a few of the options, including the soup of the day (artichoke soup), the Arabic mezze sampler, both the Indian-inspired dinner and breakfast entrees (mixed mushroom tikki and saffron upma) and the mandarin mousse dessert.

To celebrate the SFO launch, I toasted with both the Pommery champagne and Laurent-Perrier rose champagne, as well as a pineapple margarita to accompany my meal.

My feast threw me into a deep eight-hour slumber. The flight attendants kindly turned down the empty middle seats next to me, allowing me to try the much-hyped “double bed.” I appreciated the extra space, but the footwell and headrest cutouts make it hard to sprawl across both seats as an individual. For couples, however, there's truly nothing comparable in international business class.

Once I woke up, I connected to Qatar’s not-so “Super Wi-Fi.” Though internet connectivity is free for all through January 2021, the speeds — about .33 Mbps download and upload — and reliability — the connection was down for over eight hours — weren’t too impressive.

Despite the connectivity challenges, I managed to catch up on some emails and other offline work, like photo editing.

Though 15 hours and 24 minutes in the air might sound like a long time, it flew by, literally and figuratively. For years, Qsuite was leagues ahead of the competition; it's the two-time TPG Award winner for the best international business class. ANA's The Room gives Qsuite a run for its money — and it'll likely come down to personal preference on which you prefer.

Related: The top 5 business-class cabins in the sky today

As we landed on Runway 28L at SFO and began our taxi to our arrival Gate A8, five airport operations trucks were waiting to usher us to the gate. There were even more employees waiting on the tarmac, snapping pictures as we pulled in and cut the engines.

Before long, it was time to bid farewell to the crew. As I darted out the plane to make a very tight 38-minute connection, I briefly caught a glimpse at the plane's Oneworld livery, an interesting choice for an inaugural flight, I thought, since airlines usually want their name displayed prominently in all media photos.

But then it dawned on me: perhaps there's actually meaning to the Oneworld livery. Qatar's San Francisco launch isn't just about its ninth U.S. destination.

It also signifies the carrier's push to work even more strategically with its fellow U.S.-based Oneworld partners, Alaska and American, while also boosting connectivity for those based in the Bay Area.