The Coolest Amenities You'll Find in an Airplane Bathroom 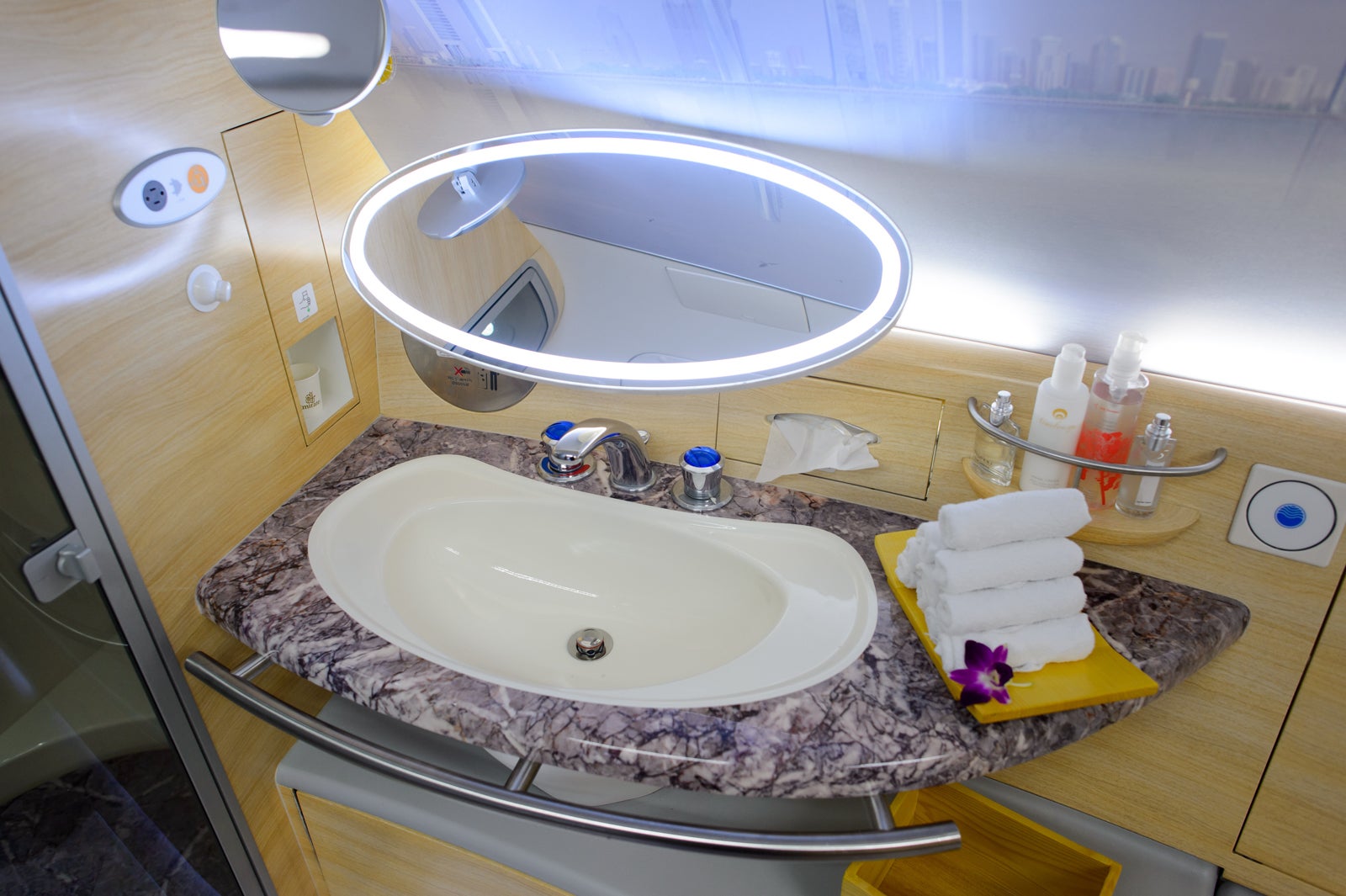 Face it, flyer: no matter how comfortably ensconced you are in your lie-flat seat, sipping fine Champagne (or perhaps you're just dreaming of caviar back in basic economy), chances are good that, at some point during your flight, you'll have to go to the bathroom.

And pity the lowly airplane lavatory. In a 2005 teNeues tome called "Airline Design," out of some 400 pages, approximately zero are devoted to bathrooms. But not all airplane bathrooms are as offensive as those on the 737 MAX.

Indeed, more airlines are realizing that bathroom time is just another chance to impress customers. Maybe a vase of orchids on the counter will do it, or mini Evian brumisateurs. Whatever special accents airlines might think up to distinguish their lavatories from the rest, the most basic things like cleanliness still count for a lot.

Take it from the TPG Lounge, where member David M. said, "I don't care about fancy amenities in the crapper, I care about basics: working equipment, cleanliness and supplies stocked."

Hard to argue with that. When you consider just how dirty airplane lavatory floors can be, cleanliness truly is a virtue. At worst, airline lavs are breeding grounds for all sorts of nasty germs, but at best they are discreet incubators of innovation, too. Of course, in an age of ever-shrinking main cabin lavatories, just being able to stand up straight without hitting your head can be something of a luxury: Jean-Francois R. told the TPG Lounge he digs "a slanted ceiling five-feet high to ensure my neck gets [a] good stretch along with my legs."

While some airlines are reticent when it comes to dishing on bathrooms (JetBlue, for example, had nothing for our story at this time), that doesn't mean you won't find flashes of glamor — and maybe more — behind those closed lavatory doors.

Kelly C. told the TPG lounge that she was once traveling in Garuda Indonesia's business class, and "Anytime someone went into the bathroom there was someone to go in after and clean the bathroom. So anytime you went in it was clean. It was amazing."

While there have been some unverified reports of bathroom attendants aboard select flights, the reality is that, in some business and first class cabins, members of the flight crew are the ones discreetly and meticulously keeping things squeaky clean. Mark Morimoto, a spokesman for Japan Airlines, told TPG, "As far as I understand, there are no bathroom valets in flight, but our cabin crew do an exceptional job to keep the restrooms clean throughout the flight, regardless of class of travel."

If you think that seat wipes should be a basic bathroom requirement these days (wishful thinking!) consider the goodness, beauty (and let's face it, rarity) of a clean, splash-free floor — something travelers cite frequently as a prized lavatory attribute. And a clean toilet seat makes TPG Lounge member MJ Gilbert "feel like royalty."

It's a traveler's truism that you often end up judging a country on the strength of its toilet paper, and airlines are no exception. Consider John H.'s reveal to the TPG Lounge: "Someone once left a packet of double ply quilted next to the sink," he reported. "I may have been sitting in an economy seat, but my backside was riding first class that day."

Darcy E. told the TPG Lounge that she, "is still very impressed by the incredibly nice toilet paper on Malaysia Air," adding that, "it was nicer toilet paper than that at some hotels I have stayed in!"

What's cooler than that? The Hello Kitty toilet paper seen by Dominic F. in an EVA Air lavatory.

And while decorative toilet paper is fun, what people seem to find coolest of all is having a fully stocked supply of things like toilet paper and paper towels in the lavatory.

Not surprisingly, some of the coolest amenities in airplane lavatories seems to be found exclusively in business or first class cabins, and for some that means seeing the light ... as in, through the windows that are a nifty design feature of some business and first class lavatories (think: Emirates, Etihad, ANA, Turkish and Qatar).

You'll also find a bidet in economy class lavatories on at least one ANA Dreamliner, as Itay L. told the TPG Lounge.

In response to queries about what products passengers will find in the lavatory, some airlines were more forthcoming than others. "Within Delta One we offer a premium, differentiated level of service featuring Malin + Goetz lavatory amenities," Delta spokesperson Savannah Huddleston told TPG. "These amenities offer retail experiences of their popular luxury products, specifically the Lime hand wash and Vitamin B5 lotion," she said. These amenities are also offered within Delta Premium Select lavatories.

And while Heath H. reported finding mini Evian brumisateurs, or facial misters, in the first-class lavatory of an Asiana A380 from Los Angeles to Seoul, it's not clear if Air France offers a version of this signature French skincare product in its own lavatories.

Often, the products featured in an airline's amenity kits will find their way into the lavatory. For Air New Zealand, that would mean Ashley & Co toiletries and on Qantas, bespoke ASPAR products by Aurora Spa. American says it offers soap by American purveyor C.O. Bigelow in all lavatories. The range is also currently in AA's amenity kits for passengers traveling in first, business and premium economy on international and transcontinental routes.

A spokesperson for Virgin Atlantic told TPG that "In our upper class lavatories we have Noble Isle products ... a very strong British brand. However, our customer experience team is in the process of creating some new onboard amenities to be introduced next year."

She added that, "In upper class, we use bespoke aromatherapy by [skincare brand] de Mamiel, providing hot towels infused with aromatherapy oils designed exclusively for Virgin Atlantic." And there are reports of Cowshed chamomile facial mists available for free use in some cabin lavatories. (Spa treatments with Dr. Hauschka and Cowshed products can be enjoyed in Virgin's Heathrow, Gatwick and JFK clubhouses).

Along with the "amazing washroom [and] bathroom with shower" on Emirates' A380, TPG Lounge member Charles M. called the Emirates amenities kit "fantastic."

And in some of Qatar's A380 bathrooms you can expect a range of colognes to sample, in addition to a place to hang your jacket for the duration of your lavatory visit. (The airline's amenity kits for first and business class passengers apparently aren't too shabby, either.)

Of course, there are always the little touches that can mean a lot: In a lavatory riposte to chocolates-on-the-pillow, Hoa L. told the TPG Lounge she found the placement of orchids in Hawaiian's lavatories to be pretty cool, too.