The top 5 business-class cabins in the sky today 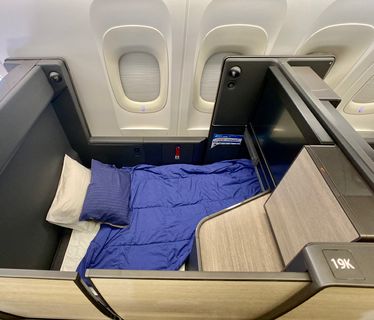 During the COVID-19 crisis, our team has temporarily ceased taking review trips. However, we are still publishing new flight, hotel and lounge reviews, from trips taken just before the lockdown, and articles — like this one — based on flights taken before the pandemic. Please note that if you fly during the coronavirus pandemic, you will encounter a very different experience, both on the ground and on board, from what was experienced during the review flights that formed the basis for this story.

This roundup of the top-scoring business-class cabins from our reviews comes after our recently published top and worst premium-economy cabins.

The title of the review of this flight says it all: "The new gold standard."

The mind of TPG Travel Analyst Zach Griff was completely blown by the seat and cabin when he boarded his flight from Tokyo Haneda (HND) to New York JFK.

The Room, the name that ANA gave its new business-class seats, is incredibly spacious and "blows Qatar's QSuite out of the water." At 38 inches, the seat is even wider than your average first-class seat. (Keep in mind that The Room is not available on all ANA flights with the Boeing 777, as only a number of airplanes in the fleet have been converted with the new seats.)

The only gripes Zach had with the hard product were that once fully extended, the lie-flat bed is only 71 inches long, and there isn't much in the way of storage.

In terms of amenities and inflight entertainment, the 24-inch 4K screen is the "highest quality monitor" that Zach had ever seen on a plane and even better quality than his MacBook. It also meant that the tailcam — an AvGeek favorite — was super-high-definition. What more could you ask for?

To Zach's disappointment, however, there were only 40 Western movies and 9 Western TV shows on offer. That's still more than you could possibly watch over the course of a flight, but a lot fewer than some competitors.

ANA gives its business class passengers two pillows, a set of pajamas, a cardigan and slippers — the kind of offering you'd expect in some of the best first-class cabins in the world.

As for the food? You guessed it: Zach loved it. His abundant main meal that didn't seem to end was perfectly cooked and nicely seasoned. There was so much food in fact, that even after six hours of sleep after his first meal, he was too full to eat the eggs Benedict he was served for breakfast.

All Nippon Airways (ANA) Airbus A380

If first place wasn't good enough, ANA has taken second place, too. This time, it was a flight from Japan to Hawaii on the airline's A380, flying exclusively to the island destination. (ANA's A380s are grounded at the moment due to the pandemic, like most A380s, the largest passenger jets in the world.)

Unlike on the Triple Seven, there was ample storage and the window seats had large storage bins, which meant that TPG Editor-at-Large Zach Honig didn't need to use the overhead storage for his larger items.

Overall, the only disappointing thing about the seat was the lack of personal air vents.

Zach was very happy with the quality of the IFE screen, but also mentioned that the selection of Western content might be a bit weak for a frequent flyer.

What really stood out was the quality and performance of the Wi-Fi, which Zach called "outstanding" and the best he had experienced on an A380.

Before his flight, Zach was able to choose online between a choice of Japanese or Western food. He opted for Japanese. Despite a two-hour wait to be served the main meal after takeoff, the food and beverage category still scored a very respectable 22/25, mainly thanks to a wide selection.

In third place is Upper Class (business class) on Virgin Atlantic's newest addition to the fleet, the A350-1000.

TPG U.K.'s Director of Content Nicky Kelvin was onboard one of the aircraft's first-ever flights, from London to New York, in September.

The new seats are a great improvement over those found on the airline's Boeing 787 Dreamliner and Airbus A330-300s, which are rather awkwardly designed, though Nicky did find the position of the tray table quite uncomfortable. The A350 is also a win for those who like to stare out of the window as its Upper Class Suite seats face out the window, unlike older Upper Class cabins whose seats face inwards into the cabin.

In terms of amenities, the ability to control IFE using your phone was a welcome perk for Nicky and he really appreciated the efforts made by Virgin Atlantic on its latest sustainable update to its onboard amenity kit — the Goodie Bag.

In true Virgin Atlantic style, Nicky's inflight meal was hearty and delicious. The beef was tasty and the raspberry pudding tart was "perfect."

To finish things off before arrival, Virgin served up the classic afternoon tea, which was delicious.

As for the service Nicky received, the food service was a bit slow but he put this down to the fact that it was the first time this crew was operating on a passenger flight on a brand-new aircraft. Other than that, his experience was as fun and cheeky as he would have expected from Virgin.

TPG Reviews Intern Javi Rodriguez was lucky enough to have an older Thai Airways 777 switched out for a shiny new Airbus A350 on his flight from Bangkok (BKK) to Frankfurt (FRA) which featured a modern and beautiful cabin.

Javi found that the seat in Thai's "Royal Silk pods" had "ample shoulder room" and were very spacious.

A huge issue for frequent flyers is whether an airline provides high-quality headphones. While Thai had these, with great sound quality, Javi found them to by slightly uncomfortable to wear. On the plus side, a mattress topper — not always offered in business class — made his lie-flat seat feel more like a real bed back down on earth.

Fresh, flavorful, excellent, delicious and refreshing were just some of the words that Javi used to describe his food and beverage. The Violet Bliss, one of Thai's signature beverages, and the Pinot Noir he was served during his meal are two of the highlights of the beverage selection. As for the food, the beef curry main course was "hands down one of the best meals" that Javi had eaten on a plane. Breakfast didn't disappoint, either, as Javi thoroughly enjoyed his Asian-style morning feast.

To round things of almost perfectly, the service was warm and personal from start to finish.

Related reading: The airline staff who made me feel like a first-class flyer even in economy

Javi also flew Hainan's business-class product on its 787-9 Dreamliner from Beijing (PEK) to Chicago (ORD), which he described as a "world-class travel experience".

The seat itself provided him with a "solid night's sleep". This was because of the extra space provided by the open ottoman, rather than an enclosed footwell.

Once again, good headphones go a long way. The Bose QC-25 that Hainan provides business-class passengers were some of the best Javi had ever used on an aircraft. The amenity perks didn't stop there, though. Both slippers and pajamas — in a range of different sizes — were handed out to all passengers.

And then there was a full turn-down service, also not a frequent occurrence in business class.

The only real downfall for Javi was the "lacklustre" Wi-Fi, which, for a night flight, wasn't too much of a problem anyway.

In terms of food and drink, you know you're off to a good start when you're served a glass of Leventre-Dedieu Grand Cru Brut Champagne on boarding. The excellent gastronomical experience that Javi had onboard is likely to have something to do with the fact that Hainan's onboard menu is created by Chef Dong Zhenxiang, named the "best chef in China," according to the menu.

In summary, the dinner service was as impressive in its presentation as it was in its taste, with the flavorful and delicious spicy pork main course stealing the show.

The service Javi received also lived up to the airline's reputation for polished and professional cabin crews.

Hopefully our round-up of the top business-class cabins in the sky has given you food for thought, literally. There's more to just looking for a good redemption or a relatively cheap business-class ticket. As always, when flying in a premium cabin it comes down to the overall experience, and these airlines stood out.