Middle of the Pack: Flying Business Class on Thai's 777-300ER 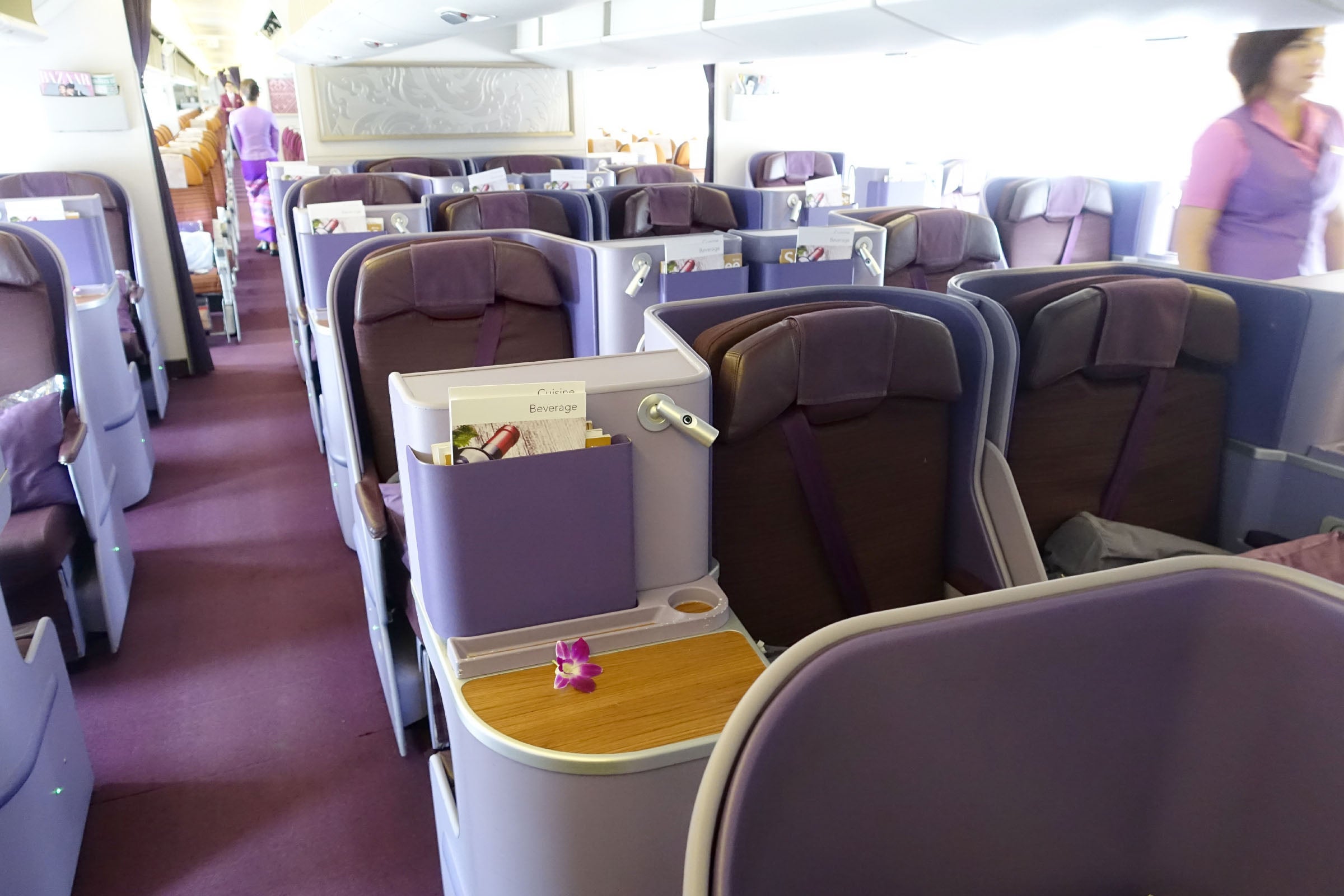 My most recent round-the-world trip was one of my longest yet, first bringing me from Newark (EWR) to London (LHR) on Air India, on to Kuala Lumpur (KUL) on Malaysia's A350 and finally to Sydney (SYD) on an MH A330, where I caught a flight on Singapore's new A380 to Changi Airport (SIN). From there, I had a couple days to get to Toulouse, France (TLS) for the delivery flight of Qatar Airways' first A350-1000.

Since we try to work reviews into every leg of a trip, my options were incredibly limited. I settled on Thai Airways' 777-300ER for the long-haul segment from Southeast Asia to Europe, in the airline's comfortable 1-2-1 staggered business. I've flown Thai first class on several occasions, on both the Airbus A380 and Boeing 747-400, so I was curious to see what the experience would be like in biz.

We booked the flight via United MileagePlus, for 100,000 miles plus about $64 in taxes and fees.

This is actually United's most expensive saver business-class award, and the pricing doesn't make a whole lot of sense if you ask me. For example, if I had tacked on a flight from, say, Fiji, the rate would have dropped to 75,000 miles, even though I'd be flying a few thousand more miles.

Originating in Australia or New Zealand would have dropped the rate to 90,000 miles. So by adding Sydney-Singapore on the new SQ A380 I would have saved 10,000 United miles plus the 58,000 KrisFlyer miles I used for that flight — unfortunately Singapore's latest premium products can only be booked through KrisFlyer, though.

We could have also booked this itinerary via Aeroplan for 75,000 miles, however we've found that United offers superior customer service during irregular operations, and figured it'd be worth spending the extra 25,000 miles for that insurance policy of sorts, since a cancellation could have caused me to miss key events in Toulouse.

This isn't an itinerary you'd be likely to book with cash, since there are a handful of one-stop options available. A one-stop Lufthansa flight connecting in Frankfurt (FRA) would have run just under $4,000 one-way, however, giving us a value of roughly 4 cents per mile.

My regional 777 flight from Singapore arrived in Bangkok (BKK) a few minutes ahead of schedule, and I passed through security quickly and made my way to the Royal Orchid Spa.

Business-class passengers get a free 30-minute massage (one hour if you're flying to or from Bangkok in first class), and I went with a head and shoulder massage. It was one of the best I've had!

After some post-massage snacks and a delicious ginger tea, I wandered across the hall to the Royal Silk business-class lounge.

Thai's main lounge is gigantic. There's not a lot to see and do, necessarily, but there's plenty of space to stretch out.

There's a satellite salad bar and beverage area, and then one main buffet at the center of the lounge.

I was there during breakfast and lunch, but salad items were available the whole time.

Breakfast eggs and sausage were quickly replaced with stir-fried veggies and a Thai soup.

I grabbed a steamed bun and sticky rice, along with a Singha beer.

The terminal itself is interesting to photograph, and there's decent shopping, but I wouldn't leave the lounge especially early to head to the gate.

Plane-spotting is also a bit of a challenge, with dirty windows and an odd layout. I managed to get a good look at my 777-300ER, though. HS-TKR was delivered from Boeing in October 2013, and has been flying for the airline for some four and a half years. It's used primarily on long-haul routes to Europe, but it operates within Asia as well.

...and another 18 in a smaller cabin behind the center galley.

I selected 19K, one of the two identified as a "good seat" on SeatGuru (the other being 19A across the cabin).

Like its counterpart on the other side of the cabin, 19K is positioned at the bulkhead, which made it a bit more private, in my opinion.

I also had three windows to myself, which was quite nice, and made it easy to control the light around my seat.

Initially, it looked like there were several decent storage areas. Unfortunately I was mistaken.

There was a small compartment under the foot rest, which is where I stored my shoes.

The foot rest itself was fairly deep and wide — and, since it's fixed, I was able to put my feet up the moment I sat down.

The only real compartment was to the side of the seat, and it was barely large enough to hold my phone and pocket camera.

The seat and entertainment controls were located just above that side compartment, and were easy enough to figure out.

The seat was comfortable in bed mode, thanks in part to the comforter and large pillow. I would have loved to have a mattress pad, though.

The business-class amenity kit had a basic assortment of items, including folded-up slippers, an eye mask and earplugs, dental kit, hairbrush, hand cream and lip balm.

The included headphones weren't very good, unfortunately, so I used my own.

Thai's entertainment system was responsive and high-res, but the screen was on the small side.

There were a handful of new releases, plus an assortment of TV shows. Nowhere near the selection you'd find on some carriers, like Singapore, but there was enough to keep me entertained when I wasn't asleep.

I was very pleasantly surprised to see that Thai serves Veuve Clicquot, my favorite mid-range Champagne.

I had a glass of that before departure, then shortly after takeoff the full bar cart came around.

At first, I just ordered a sparkling water with lime, since none of the mid-shelf options really jumped out at me.

I did spot something unusual, though — Drambuie — which is a sort of sweet Scotch. It was way too sweet for my liking, but one of the things I love about flying in premium cabin is the opportunity to try things I wouldn't spend for on the ground. So now I can check Drambuie off the list!

I enjoyed some mixed nuts with my Drambuie, which helped cut the sweetness a bit.

The first course was foie gras, which I strongly oppose on ethical grounds — but I won't get into that here. I couldn't tell you how it tasted, though.

I selected the Thai option for my entree, which consisted of seafood lemongrass soup, stir-fried loofa with egg and a choice of chicken or pork curry (I went with chicken). The curry was good but the portion seemed especially small.

The first dessert course was a selection of cheese and fresh fruits — it was pretty sad looking and it didn't taste much better.

I rounded out the meal with banana in coconut milk, along with some tea and Champagne. That was definitely the highlight of the meal.

There was supposed to be a second meal — which makes sense on a 12-hour flight — but somehow I missed it entirely even though I woke up more than an hour before landing. None of the flight attendants approached me to offer anything, either, so about 30 minutes before landing I asked in the galley. Yup, I had slept right through it!

A flight attendant brought me lasagna which I had to eat so quickly that I completely forgot to take a picture. I only had a couple bites though — both because we were about to land and because it was hardly a memorable dish. I figured I'd grab some food in the Lufthansa lounge before my flight to Toulouse, and that's what I did.

Thai got me from A to B — safely, on-time and using miles — in a lie-flat seat. There was decent privacy, free massages at BKK and a comfortable seat. The food wasn't great, and the product isn't exactly cutting-edge, but for a routine intercontinental hop, this certainly did the trick. That 100,000-mile redemption rate is mighty steep, though. Next time I'm booking through Aeroplan.