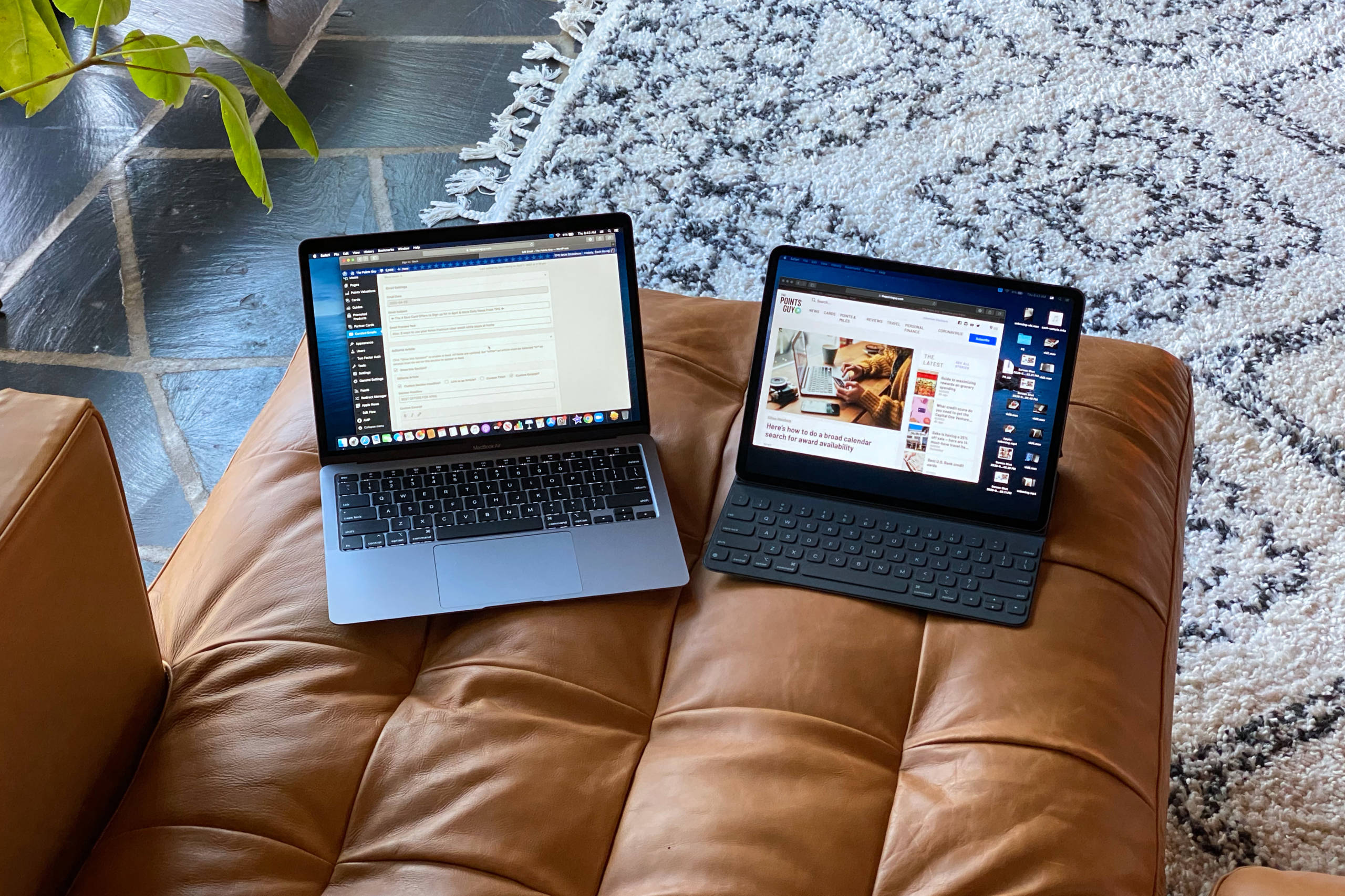 Back in the day, when air travel was still a thing, I never flew without Apple's (since-discontinued) 12-inch MacBook — my go-to (underpowered) workhorse, whenever I was on the road. On longer trips, I'd also bring an 11-inch iPad Pro to keep me entertained on lengthy flights, before bed and at the hotel gym. Ideally, I would have been able to fly with just one device — a more versatile iPad, perhaps. But each served an important role, and, as a content creator and consumer, I really did benefit from having two.

If you have $1,000 to spend on a new Apple device, there's a good chance you're now deciding between two seemingly similar devices: the 12.9-inch iPad Pro, which now includes trackpad support, and the refreshed MacBook Air, which just got a big performance upgrade, along with a much-improved keyboard.

Facing the same dilemma myself, I decided to take both devices for a spin, to see if this latest iPad Pro could finally serve as the laptop replacement I've been hunting for. After a couple weeks with both, it was clear that my dedicated laptop wouldn't be going anywhere — at least for the time being.

First, the MacBook Air. Starting at $999 (or $899 if you're a student or educator), it's the best pick for just about any Apple laptop user. Pros may benefit from the larger display and higher performance offered by the MacBook Pro series, but the new MacBook Air should hit the spot for just about everyone else.

It's a far speedier machine than the 12-inch MacBook I'm used to, and the 13.3-inch display is super-sharp, with a 2560 x 1600 resolution. It also has a battery that's rated for up to 12 hours of use, when playing back video with the Apple TV app, though I could wear it down in half that time when browsing the web, joining video calls and writing articles for TPG.

Meanwhile, on the productivity front, the new MacBook Air has the best keyboard I've ever used — an enormous upgrade from previous models. In fact, the only area where the Air seems to fall short is with the built-in FaceTime camera. I've been spending much of each day chatting on Zoom, and the image really seems to lag behind those captured by cameras certain colleagues are using.

In a time where we're home all day and all night— for work and play — switching between the two devices has really helped to break up the day. I've ended up using the MacBook Air exclusively during work hours, shifting to the 12.9-inch iPad Pro on evenings and weekends. As great as the Air is for productivity, the iPad serves as a perfect companion for content consumption.

For me, the biggest advantage of the iPad Pro ($799+) is that it runs the full suite of iOS apps, along with some iPad-specific apps that are optimized for the device's larger screen. The options are virtually limitless on the content front — most major networks have dedicated apps, and access is typically free if you subscribe to a given channel as part of your cable package. Alternatively, you can add individual subscriptions directly on the iPad.

While much of that content is available via a browser on the MacBook Air as well, I've found that dedicated apps are more reliable, and add features — downloading content with Netflix, for example, to watch on a plane, or while another user is streaming content using the same account. And, assuming you stream at a high-enough resolution, content looks great on the 2732 x 2048-pixel screen. The battery should get you through most intercontinental flights, too — with the display at lower brightness, you can expect it to last up to 10 hours, according to Apple.

You can also choose to view content in a smaller window, as you use other apps, and you can stream audio to a second set of headphones, as long as they're connected to a newer Apple device running iOS 13. I found the built-in speakers to be reasonably powerful for a device of this size, too.

The iPad Pro recently became far more useful when it comes to productivity, too. Apple added trackpad support — there's a curser, just like on a laptop, and you can use gestures to control the device as well. I was able to quickly pair a Magic Trackpad 2 ($149), but third-party Bluetooth trackpads and mice work, too.

Meanwhile, while I'm not much of an artist myself, my little sister quickly took to the Apple Pencil ($129). The latest model even charges directly from the iPad, and attaches magnetically when you set it above the display. She loved using the Pigment app, and had no problem finding free content to use.

Also on the content creation front, the latest iPad Pro models include much-improved cameras — a 10-megapixel ultra-wide and a 12-megapixel wide cam, similar to those on the iPhone 11. Armed with "studio-quality mics," Apple is even positioning the iPad Pro as a powerful video-capture device. I'm not sure I'd want to walk around filming content with a large tablet, though I could see it being appropriate for stationary interviews.

The iPad also now offers a LiDAR (Light Detection and Ranging) scanner, which measures reflected light to determine size and distance, making it possible for the device to, say, calculate the height of a person, or the size of an object, while also dramatically improving the performance of augmented-reality apps. And, while the selfie cam is considerably more powerful on the iPad than the MacBook, it's positioned at the top of the display when holding the device vertically — an awkward position for video chats, if you're holding the iPad in landscape mode.

The device offers some travel-friendly advantages as well. Without a case, the 11-inch model weighs just over a pound, making it especially portable. The larger 12.9-inch version I tested weighs half as much as the MacBook Air, at just over 1.4 pounds. You can also choose to add cellular connectivity, for $150 more. Thanks to eSIM support (plus a Nano-SIM slot), you can easily add a data package as soon as you land in a new country, or roam with your home provider, instead.

Which should you pick?

So, which should you get? If you use an employer-issued computer for all work-related tasks, I might seriously consider the iPad Pro.While it's clearly best suited for leisure activities, for most users, it can pinch-hit when you need to be productive, too. Similarly, the MacBook Air works just fine for entertainment, though the form factor is better suited for typing on a sofa than watching a movie in bed.

The iPad Pro can also serve as a great MacBook companion, especially if you have a newer Apple device running macOS Catalina, which adds support for a tool called Sidecar. With the feature enabled, many iPad models running iPadOS 13 can serve as a second display for your Mac, letting you wirelessly extend your desktop. You can even control your laptop using gestures directly on the iPad screen, and use Apple Pencil to draw and edit photos via macOS apps.

Ultimately, where the MacBook Air really thrives is when it comes to multitasking. I would have been far more productive if the iPad Pro supports multiple floating windows on a single screen, so I could use several apps at a time. The iPad has made some strides — you can use two apps side-by-side, in Split View, with a third open in its own "Slide Over" window — but it isn't nearly as versatile as a laptop. While I was able to accomplish the same tasks, many took far longer on the iPad.

Form factor is another concern — even with the Smart Keyboard Folio ($179+), I couldn't comfortably type when using the iPad on my lap, as I do every day with the MacBook Air. That said, the new Magic Keyboard ($299+) should help improve the situation there, thanks to its larger format, full-size keyboard and integrated trackpad. I look forward to revisiting the iPad Pro as a major productivity player once that accessory launches in May.

With a 3% return on Apple purchases, you might assume the Apple Card is your best bet. When it comes to eligible electronics, though, we generally recommend the American Express® Business Gold Card — if you select U.S. purchases made from select technology providers as one of your two bonus categories, you can earn 4x points on your Apple purchase (4x points applies to the first $150,000 spent in combined purchases each calendar year in two categories where your business spends the most each billing cycle; then 1x). That's equivalent to an 8% return, based on TPG's valuation of Membership Rewards points. You'll be eligible for extended warranty benefits, too.

For more on which cards to use, see our detailed guide covering 9 things to consider when choosing a credit card for large purchases.