One Year as a Global Digital Nomad, by the Numbers: Cost, Flights, Hotels 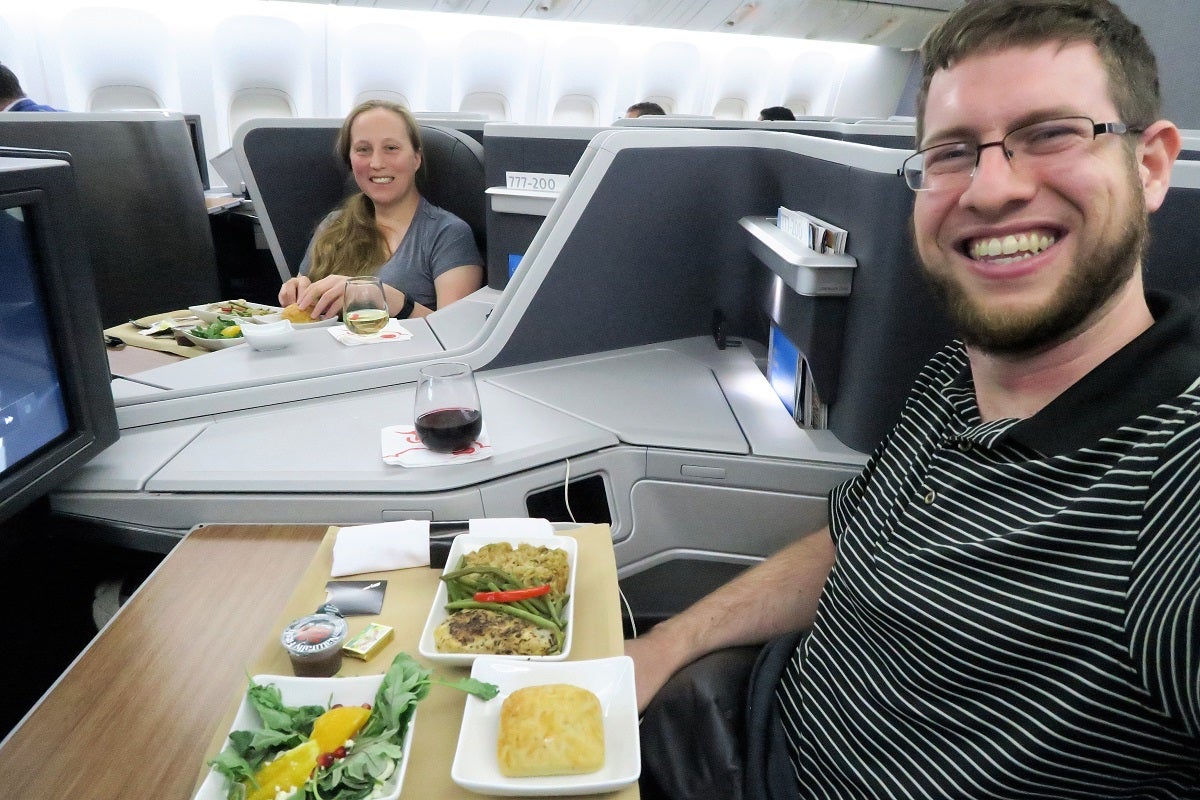 One Year as a Global Digital Nomad, by the Numbers: Cost, Flights, Hotels
This post contains references to products from one or more of our advertisers. We may receive compensation when you click on links to those products. Terms apply to the offers listed on this page. For an explanation of our Advertising Policy, visit this page.

One year ago this week, my wife Katie and I set off on an adventure. In the prior week, Katie had defended her PhD thesis and we finished donating or selling almost all of our possessions and moved out of our home of the last eight years in Austin, Texas. After dropping off some of our things with family, we set out on July 2, 2017, as digital nomads.

Since then, we have lived — or, maybe, "lived" — at 97 different addresses, slept in 21 countries and flown 270,946 miles, living out of our Osprey travel backpacks... and I've worked full-time for The Points Guy the entire time. Let's recap the last year by the numbers.

Thanks to OpenFlights, I've been able to easily keep track of my flight stats from the last year. My direct flight miles totaled almost 271,000 miles. For reference, that's almost 11 times around the Equator and 32,046 miles more than the average distance from the earth to the moon. Or, put in flight terms, that's more than 78 flights between New York City and London.

And how long did all of that take? About 618 hours — or almost 26 full days — of time from the aircraft door being closed to it being opened on the other side. Of that time, 293 hours were spent in economy, and almost 6% of that entire time was from one 17-hour flight: Qantas' inaugural flight from Perth (PER) to London Heathrow (LHR). More than 110 hours were spent in premium economy, often in order to review the product. Among others, that list includes Aeroflot, British Airways, Cathay Pacific, LOT Polish, Qantas — with more reviews coming soon. And I've been incredibly lucky to have scored 207 hours in international business class / domestic first class — mostly thanks to upgrades on domestic flights — and 7 hours in international first class.

In order to re-qualify for top-tier elite status and utilize my benefits, I've flown 49 flights on American Airlines in the last 12 months. However, that doesn't even account for one-third of my flights in that period. I pride myself on how many carriers I fly; part of my job is getting a perspective on the commercial aviation market and what airlines are best (and worst).

Thanks also to my United Island Hopper experience, United was the airline I flew second-most with 21 flights. British Airways was third with 13 flights thanks to intra-Europe hops, premium economy reviews and mileage runs. Thanks to a sub-$200 error fare from New York City to Beijing that I flew twice — while AirMuling — we flew 8 Air Canada flights across two weeks. Between intra-Japan hops and a deal to Australia, ANA made the top 5 with 7 flights.

According to my OpenFlights journal, I've flown 27 different aircraft types in the last 12 months:

By far, I flew the Boeing 737-800 more than any other aircraft — accounting for 33 of my flights. The Airbus A320 and A321 tied for second at 19 flights each. That makes sense, considering the 737 is the most produced jetliner of all time, and the A320 is close behind.

From ADD to YVR, I've flown to, from or through 77 different airports in the last year. While I would be uncomfortable picking a favorite from that Addis Ababa - to - Vancouver list, I always feel comfortable in Dallas/Fort Worth, Doha, Hong Kong and Tokyo's Narita due to being a very frequent guest. However, I don't mind calling out London's Stansted and Addis Ababa as my least favorites.

I've maintained Executive Platinum with American Airlines AAdvantage for years as TPG's resident American Airlines guru. And, while I love my Oneworld Emerald status, when I had the chance to earn Star Alliance Gold status for 46 months for under $1,000, I took advantage of the opportunity. Despite having never flown Asiana, I'm now an Asiana Diamond elite member into early 2021.

I have maintained IHG Platinum Elite status since 2016 thanks to my IHG Rewards Club Select Credit Card, and I've found it to be highly valuable for our travel style. Especially when staying overseas or at lower-category properties, we have been treated very well by IHG properties — including getting too many suite upgrades to list. While the IHG Rewards Club Select Credit Card is no longer open to new applicants, the IHG Rewards Premier Credit Card offers Platinum Elite status to cardholders, along with a nice 80,000-point sign-up bonus after spending $2,000 in the first three months plus an additional 40,000 bonus points after spending a total of $5,000 on purchases within 6 months of account opening.

But, most of my hotel elite statuses stem from one card: The Platinum Card® from American Express. As soon as I received my card, I activated my Starwood Preferred Guest Gold status and Hilton Honors Gold status. Then, I immediately matched my SPG Gold status to get Marriott Gold status.

As I wrote about last year, to get the extended 75-day award booking window with Choice, I matched my IHG Platinum Elite status to Choice Platinum in 2017. And, since Choice counts award nights as elite-qualifying stays, I re-qualified for Platinum for 2018.

The final status was one I stumbled into without realizing it: Wyndham Gold is earned after just 5 nights, and I picked those up organically through various cheap stays.

We've been — quite literally — all over the world in the last year. From chain hotels to a wrecked Airbnb and from an RV to a prison, we've experienced the highs and lows of traveling as nomads across 21 different countries and regions (Australia, Bosnia and Herzegovina, Canada, China, Colombia, Ethiopia, Germany, Guam, Italy, Japan, Marshall Islands, Mongolia, Netherlands, Serbia, South Africa, Spain, Taiwan, United Kingdom and United States — plus Hong Kong, a special administrative region of China, and the Northern Mariana Islands, a commonwealth of the United States. Taiwan is being considered as its own country for the purposes of this list, although this is a hotly debated issue.)

This doesn't include the 22 nights I've spent on a red-eye flight — or the red-eye train from Mongolia to China.

Our most-expensive night was at the InterContinental Sydney Double Bay. Already booked on a trip to Sydney, we saw this post from Extreme Hotel Deals and pounced for a night in early December. While it was an excellent rate for a posh hotel, it still ended up being our most expensive night of the first 365 nights of our backpacking around the world.

There's a notable caveat here: my records only count the nights I paid for personally. So, this doesn't count nights when I was reviewing a hotel or traveling for TPG — which accounted for 47 nights across 22 reviews/conferences/events — nor does it count those paid for by an airline as compensation or by a credit card benefit.

We earned over 44,000 Etihad Guest miles by flying the incredible Etihad Christmas Day error fare. And as we were about to leave Austin, we realized that these miles were expiring. With less research than we normally put into visiting a new country, we hurriedly booked award flights to visit Serbia and Bosnia on Air Serbia — costing just 49,080 miles total for each of us to fly from Stuttgart to Belgrade (5,890 miles each), Belgrade to Sarajevo (5,000 miles), Sarajevo to Belgrade (5,000 miles) and then Belgrade to Berlin in business class (8,650 miles). We topped off our Etihad Guest account for the redemptions with a transfer from American Express Membership Rewards.

We rented Airbnb properties in Belgrade ($200 for 8 nights), Sarajevo ($192 for 8 nights) and — cheapest of all — Novi Sad ($160 for 8 nights). Each of these stays was an incredible value for renting an entire multi-room apartment, allowing us to experience what it was like to live in each city for just over a week. And, we loved every bit of those three weeks! Both Serbia and Bosnia were amazing places to visit.

Nights Paid for with Points: 50

About one of every seven nights we've spend on the road so far has been a points redemption:

Burning: Many of our IHG points stays have been at PointBreaks properties. However, we like picking up category 1 hotels when we have the chance (Hohhot, China; Houston, Texas; and our favorite: Holiday Inn Berlin-City West). I have also used the IHG Rewards Premier Credit Card's fourth award night free benefit a few times to reduce the net cost for a few stays.

Earning: Since we personally value Choice points higher than TPG's valuation of 0.6 cents each, we are considering each signing up for the Choice Privileges Visa Signature Card to get 32,000 points after a $1,000 spend. However, all of the Choice points we've used so far have come from buying them through Daily Getaways for around 0.4 cents each.

Earning: Way back in 2015, I signed up for the Wyndham Rewards Visa when it offered a limited time 45,000 sign-up bonus.

Burning: With the switch from categories to a flat 15,000 points per night redemption, I have been saving these points for an occasion where we would get good value out of them. That occasion popped up in February when Katie and I visited Hawaii for the first time since 2006. With expensive hotels all around Waikiki — with cash or points — we booked the Wyndham Royal Garden at Waikiki for 15,000 Wyndham points per night, ending up on a high-floor studio suite.

Both Katie and I have a Citi Prestige credit card, and it's certainly come in handy over the last year. Combined, we have received fourth night free credits totaling $1,964 — easily justifying our two $450 per year annual fees.

So, what did a year of living on the road cost? About $1,000 per month. This is in no small part due to the free nights we got via hotel points, hotel stays for review paid for by work, red-eye flights, credit card benefits and staying with family/friends. That's much less than we were paying for rent in Austin — and that's before factoring in extras like utilities, household items and small repairs.

Featured image by JT Genter
Editorial disclaimer: Opinions expressed here are the author’s alone, not those of any bank, credit card issuer, airline or hotel chain, and have not been reviewed, approved or otherwise endorsed by any of these entities.