Chugging Past Yurts and Camels: A Trans-Mongolian Train Review 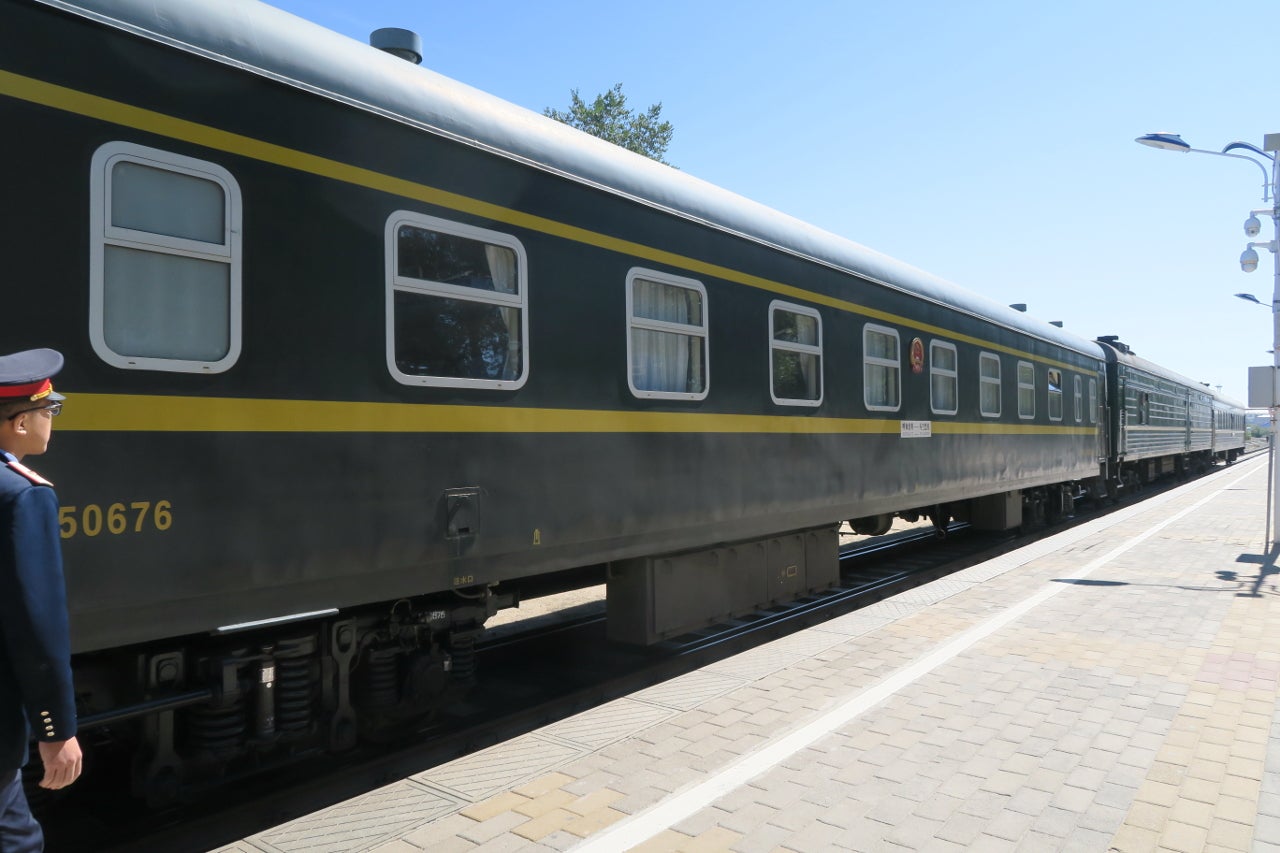 There's something compelling about train travel, especially when through remote lands and beautiful scenery. So I was set on taking a trans-Mongolian train from Ulaanbaatar, Mongolia, as soon as my husband, TPG Points & Miles writer JT and I, had booked a couple of United's old stopover awards that ended in Mongolia.

Sure, we could have taken a flight from Ulaanbaatar. But that would have been boring compared to the fabled trans-Mongolian railroad. We wanted an adventure — and we got it. Instead of a quick flight, we spent 24-plus hours on trans-Mongolian train 34 from Ulaanbaatar to Hohhot, in the Chinese region of Inner Mongolia, and in second-class hard bunks. Would we do it again? You bet.

Here's how we did it.

By definition, any train between Mongolia and Jining, in China's Inner Mongolia, is considered trans-Mongolian. Several trains serve the route, operated both by the Mongolian and Chinese railways, with some going on to Beijing. The Sunday train from Ulaanbaatar to Beijing on Sunday operates as a through train from Moscow, Russia — a fascinating journey.

All of the trains follow the same route from Ulaanbaatar to Jining. After Jining, trains 4 and 24 continue to Beijing while train 34 continues to Hohhot. From what I can tell, the experience is similar on all of these trains. We found you'll generally have less availability on trains bound for Beijing.

The Man in Seat 61 — which is a great resource for train travel — reports that Ulaanbaatar to Beijing "costs around 178,050 Tugrik (about $90) in a 4-bed sleeper on train 24." Despite extensive searching, I couldn't find a booking service offering this ticket for less than $170. I was unwilling to pay that large of a surcharge, so I decided to wait to book in person at the Ulaanbaatar train station.

The booking office is in the building to the left of the train station. Avoid the hectic area on the first floor and walk up the stairs to the second floor booking area.

The second floor booking area has schedules and pricing information on the walls in English as well as at least one agent that can speak and understand limited English.

After examining the posted information, we asked about availability to Beijing, but were told there were no tickets for "many weeks." Desperate to make our trans-Mongolian journey work, we found second-class hard bunk availability for a departure to Hohhot about a week later on September 4.

An arrival into Hohhot would mean we'd need to fly from Hohhot (HET) to Hanoi, Vietnam (HAN) to catch up with other plans. We found last-minute promotion award flights via Taipei (TPE) on EVA Air for just 12,500 of EVA's Infinity Mileagelands miles each. We transferred Citi ThankYou Points to make the award redemption. So we returned to the train station and bought two of those second-class hard bunks to Hohhot for 236,150 Tugrik ($97) per person.

Although online reports unanimously said ticket purchases are cash-only, I was able to use my Citi Prestige. While I only earned 1x points since it coded as "Other Travel - Passenger Railways," the reassurance of having trip delay protection kick in after just three hours was worth it. It's likely that if I'd used the Chase Sapphire Reserve, I'd have gotten 3x points on the purchase.

We arrived at the Ulaanbaatar train station early on the evening of departure.

There's a reasonably priced snack shop at the entrance to the underpass. I recommend stocking up on drinks and food here before your train ride.

Once the train arrived, we hurried on board to claim our bunks and luggage space. Boarding was hectic with men frantically loading large boxes and pallets of supplies into passenger cabins on the train.

Although many cabins around ours were packed to the brim with luggage and supplies, ours ended up having two men traveling alone with just a bag each.

We were assigned spots 22 and 24 in wagon two. On this route, the even numbers are upper bunks.

Spots 22 and 24 were in cabin six of nine within the wagon. Having a cabin near the middle of the wagon is preferable as the toilets are at either end. Plus, although signs indicate that it's prohibited, the conductor and passengers tend to smoke at the ends of the wagons.

Since we had upper bunks, we stored our large backpacks over the doorway.

Our cabin was better than we expected for second-class hard bunks. It had four bunks where you could easily sit up on each.

It took some effort and skill to climb into the upper bunks since there's only a foot peg. It got easier with experience, but I wouldn't recommend the upper bunks for anyone who isn't in good health.

A pillow, bottom sheet and comforter were provided. They seemed clean and were relatively warm.

There is a single bathroom stall at each end of each wagon. On one end of the wagon, there's a squat toilet.

The other end of the wagon has a Western toilet. There usually wasn't any toilet paper and there was never any soap — make sure to bring your own. Both toilets open directly onto the tracks.

There's also a sink and vanity area in each wagon, but ours had boxes stacked in it and didn't contain any soap.

Although there are electrical outlets in the hallways, they never worked. Also, it's difficult to see out the window from the upper bunks. Our cabinmates spent most of the time sleeping/lounging on their bottom bunks, so we spent much of our time looking out the window in the hallway. The remote scenery, roaming livestock, nomadic camps and small outposts in both Mongolia and China were fascinating.

Surprisingly, the train stopped at many very small, remote train stations in China that weren't listed on the schedule.

JT tried to find a dining car after boarding in Ulaanbaatar, but was told by multiple attendants that there was none, or that he wasn't allowed to walk farther back. Europeans that we chatted with the next day reported that they'd found a dining car but were told it closed at 11pm and wouldn't open again.

We'd hoped that the Mongolian dining car would be replaced by a Chinese dining car at the Chinese border city of Erlian, but once again we found none. However, a snack cart with reasonable prices was loaded at Erlian. This cart — which sold sweets, sodas, beer, noodles and more — visited our wagon four times during the 5.5 hours between Erlian and Jining.

There was a hot water boiler at the end of our car. The water is presumed safe since it is boiled, but it had a strong smoky smell and taste.

Mongolian exit procedures were handled on the train at Dzamyn-ude from 8:30am to 10:15am. Once everyone was sitting on the lower bunks of their cabins, an immigration officer took our passports and carefully added them to a growing stack on her arm. Shortly after, another officer collected customs forms.

We sat without our passports for a while and started to panic when the train moved down the track 20-30 meters. However, the officers eventually returned with our passports. At 10:15am the train left to cover the short distance over the border.

We arrived at Erlian by 10:30am. Chinese border agents boarded the train, collected passports and checked our faces against our passports one by one. Passports were returned around 11:30am.

After undergoing Chinese immigration, there's an extended stop in Erlian. This stop provides time for the bogies — the structure underneath the wagons to which axles and wheels are attached through bearings — of each wagon to be changed from Mongolian gauge to Chinese gauge. Although there are reports of passengers staying on board and observing this process — we really wanted to see it! — we were forced off-board in Erlian before the bogie changing.

Our stop in Erlian lasted about two hours. This provides time to go to a restaurant, go shopping or take a shower. Close to the Erlian train station we saw a sign offering showers for 30 yuan ($4.72). Luckily, Google Fi worked in Erlian so we were able to look up a restaurant with Wi-Fi.

After the wheel changing, the train kept three wagons continuing from Ulaanbaatar and picked up a new engine and four new wagons. This train continued as domestic Chinese train 4654. Despite our bags already being on the train, we needed to check back in at the train station, wait in the domestic departures area and board at the boarding time.

This journey was trying, both due to limited information while planning and misinformation from the attendants on board. However, I'd unquestioningly do it again and recommend it for those open to adventure and interacting with other cultures.