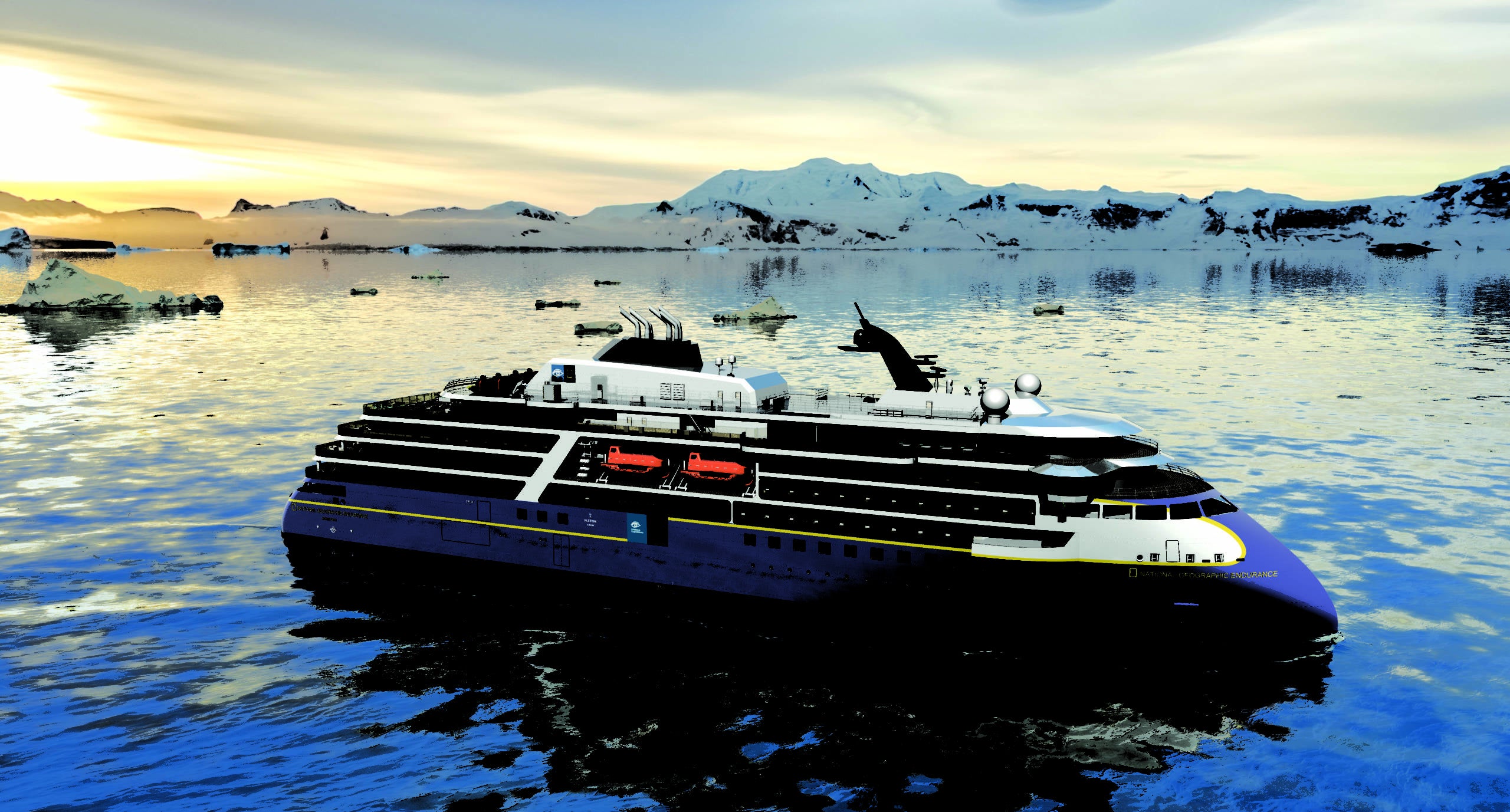 There are plenty of contenders this year for the honor of most exciting new cruise ship.

If you've been reading our expanding coverage of the cruise industry, you know 2020 is bringing the long-awaited first vessels from Richard Branson-backed Virgin Voyages and The Ritz-Carlton Yacht Collection (the new cruising arm of The Ritz-Carlton). There's also a groundbreaking new megaship on the way from cruise giant Carnival.

We're jazzed about all three of those ships, all of which made our list of the year's most notable new ocean ships.

But there's another vessel coming in 2020 that has us even more excited — one that is, we admit, a bit of a wildcard pick for the "most exciting" title: Lindblad Expeditions' National Geographic Endurance.

Designed to carry just 126 passengers, National Geographic Endurance will be tiny compared to the giant vessels operated by the likes of Royal Caribbean and Carnival. It also won't be a traditional cruise ship of the type most cruisers know. It will be an "expedition" ship — a type of cruise vessel specifically designed to travel to remote, hard-to-reach places.

The company behind the ship, Lindblad Expeditions, is barely on the radar of many vacationers. Its ships carry fewer passengers in a year than Carnival ships carry in a week.

But with the launch of National Geographic Endurance, Lindblad will have something no other cruise line has: A purpose-built passenger ship that can travel to the most extreme corners of the globe — most notably the polar regions — at any time of the year.

Thanks to a relatively new partnership between Lindblad and Hyatt, National Geographic Endurance also will be a rare vessel that can be booked with points instead of cash (more on that below). That isn't the reason we're highlighting it. But because we love earning and burning points and miles, it's something we're thrilled to see.

Here are four reasons we can't wait for the National Geographic Endurance.

It's custom-built for ultimate adventure

Quite a few companies have rolled out new expedition cruise vessels that can operate in Antarctica and the Arctic in recent years. But there’s never been anything quite like National Geographic Endurance. Billed as the world’s most advanced polar expedition ship, it's being built super tough for the most off-the-beaten-path exploring.

For starters, National Geographic Endurance will have the highest ice class rating (PC5 Category A) ever for a purpose-built passenger ship. That's a rating that will allow it to operate year-round in areas of the polar regions with "medium" first-year ice that includes old ice inclusions.

Several other purpose-built passenger ships designed for polar travel that have launched in recent years only have a PC6 ice class rating. That means they only can operate in medium ice during parts of the year.

National Geographic Endurance also will have an unusual, sloping “X-bow” designed to minimize movement in the roughest of seas (such as in the Drake Passage on the way to Antarctica). Patented by the ship's builder, Norway's Ulstein, the unusual design also results in greater fuel efficiency and fewer emissions for reduced environmental impact, Lindblad says.

One other advantage of the X-bow is that it allows for better wildlife viewing. Passengers standing at walk-out areas next to National Geographic Endurance's Bridge and Observation Lounge will be able to look straight down the sides of the ship — no leaning over the deck rail required.

It'll carry everything you could imagine for exploring

Aimed at an adventure-loving crowd, National Geographic Endurance will be loaded with every sort of adventure toy imaginable. In addition to a fleet of Zodiac boats that can be used for remote landings and water touring, it'll carry kayaks, snowshoes and cross-country skis for polar exploring.

National Geographic Endurance also will have its very own remote-operated vehicle, just in case you want to see what’s going on under the hull. There will be hydrophones on board, too, for listening in on the wildlife down below, and an underwater video system. The ship also will carry video microscopes for those wanting to play scientist back on board.

It will be super comfortable, too

National Geographic Endurance will be as stylish and comfortable as it is rugged, something that isn't always the case with expedition cruise ships.

Streamlined with Scandinavian decor, the ship's interior spaces will revolve around the Ice Lounge, a hub for daily route recaps, talks, presentations and mingling with fellow cruisers. There also will be a cozy hangout with a fireplace on the Observation Deck called The Den.

Standout features will include a spa area with a glass-walled yoga studio (just imagine taking a class with the glaciers of Antarctica as the backdrop). Called the Sanctuary, the spa zone will offer saunas with views to the outside. In addition, the ship will boast twin outdoor infinity Jacuzzis where you can get a soak while watching polar bears. There also will be two all-clear igloos on the top deck to provide passengers a sheltered and private area for outdoor viewing.

Thirteen large balcony suites -- each named for a famous polar explorer -- will offer feather duvet-topped beds, a walk-in closet and roomy stone-clad baths. All but 16 of the 56 standard cabins on the ship also will have balconies, which are relatively rare on expedition vessels. Notably, National Geographic Endurance will offer 12 solo cabins, all with balconies.

On the dining front, National Geographic Endurance will have multiple venues including a main restaurant (Two Seven Zeroº) with stellar views and a casual eatery (named C. Green’s, after explorer Ernest Shackelton’s cook). There also will be a Chef’s Table hosted by the ship's chef that will feature what the line says will be inventive, regionally inspired and sustainable dishes. Every passenger will get to experience it once per voyage.

Its itineraries are spectacular

Thanks to its built-in toughness, National Geographic Endurance will be able to take adventurous travelers to some of the most remote and little-visited corners of the polar regions.

In addition to trips to Antarctica and such Arctic hot spots as the Svalbard archipelago, the ship's early itineraries will include Lindblad's first voyages deep into the Russian Arctic. Topping our recent list of the six most notable new cruise itineraries, the 26-day sailings will be complete crossings of the Northeast Passage, the icy Arctic sea route at the top of Russia.

Other epic journeys planned for National Geographic Endurance's first year include a 20-day voyage focusing on the eastern coast of Greenland and a 35-day voyage from Ushuaia, Argentina, to Antarctica. The latter includes sailing along a rarely visited segment of West Antarctica as the vessel makes its way to the Ross Sea and, eventually, New Zealand.

How to book National Geographic Endurance

National Geographic Endurance will spend its initial spring and summer sailing in the Arctic before moving to Antarctica for the winter. Fares for polar trips start at $11,600 per person, not including taxes and fees, for a 10-night trip to Svalbard.

Lindblad is one of the only cruise-selling companies that lets you book a voyage using points. Thanks to the new partnership between Lindblad and Hyatt, World of Hyatt members can pay for a cruise using Hyatt points. Alternately, members can earn 5 base points per dollar on eligible spend (excluding incidentals), plus the standard bonuses for Hyatt elite members and elite tier-qualifying night credits.

All World of Hyatt members — regardless of status — will enjoy a $250 onboard credit to use on incidentals. Visit the Lindblad Expeditions cobranded Hyatt site for more details.

If you're paying with Hyatt points, remember you can transfer Chase Ultimate Rewards points to your World of Hyatt account. You also can boost your Hyatt points balance with the welcome bonus from the World of Hyatt Credit Card. Earn 30,000 bonus points after spending $3,000 on purchases within the first three months from account opening. Plus, up to 30,000 more bonus points by earning 2x bonus points total on purchases that normally earn 1x bonus point, on up to $15,000 in the first six months of account opening.

Planning a cruise for 2020? Our planning guide starts here:

Related stories
Why you should consider having both the personal and business Amex Platinum cards
Real ID requirements for air travel in US delayed until 2025
Another major cruise line to sharply hike onboard fees
10 surprising winter sun vacation destinations you may not have thought of
Featured image by National Geographic Endurance is being billed as the most advanced polar expedition ship ever. Image courtesy of Lindblad Expeditions.
Editorial disclaimer: Opinions expressed here are the author’s alone, not those of any bank, credit card issuer, airline or hotel chain, and have not been reviewed, approved or otherwise endorsed by any of these entities.