The Limit Does Exist: Cruise Ships Keep Growing, but Can Only Get So Big 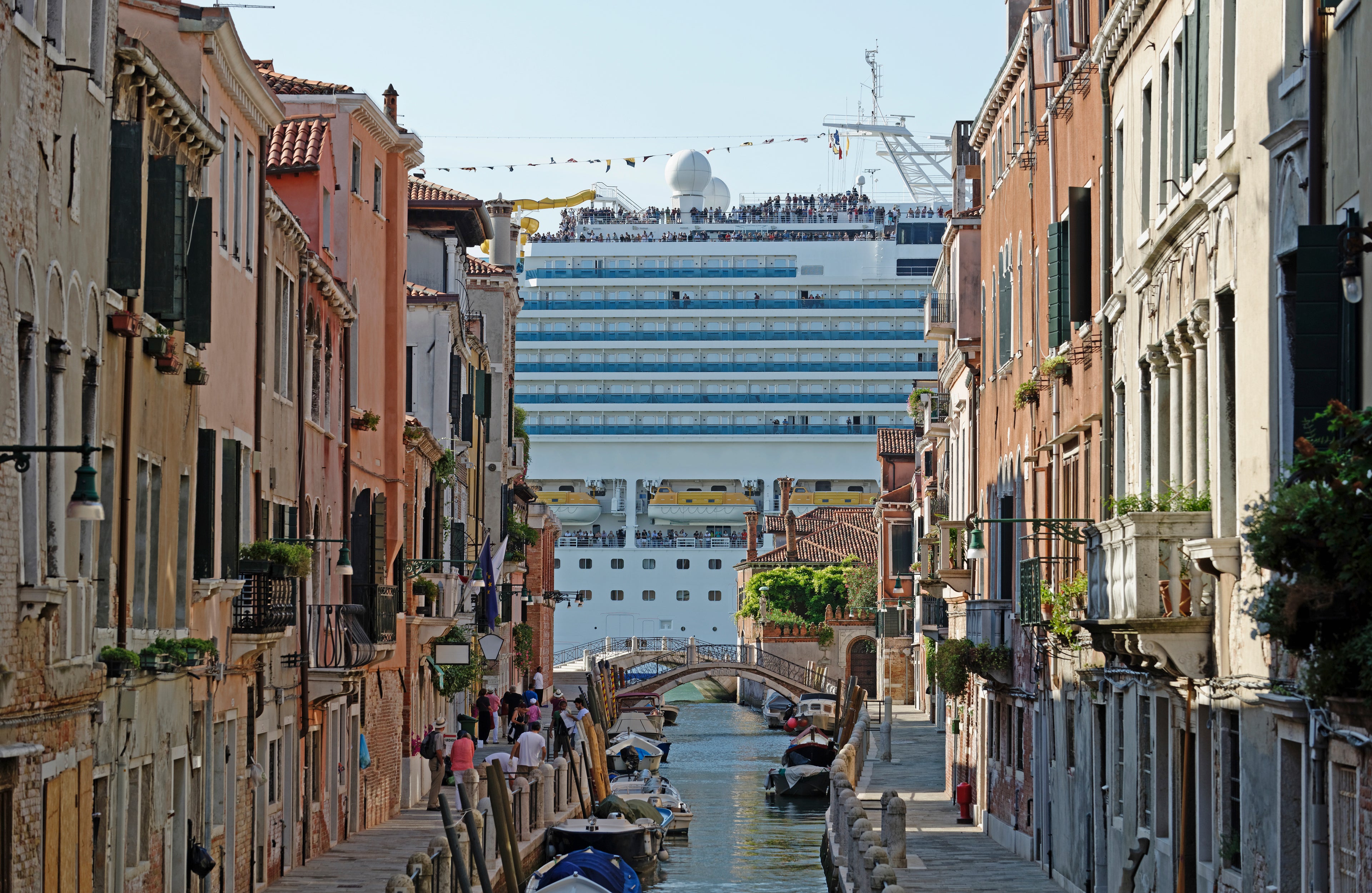 The Limit Does Exist: Cruise Ships Keep Growing, but Can Only Get So Big
This post contains references to products from one or more of our advertisers. We may receive compensation when you click on links to those products. Terms apply to the offers listed on this page. For an explanation of our Advertising Policy, visit this page.

At 171,598 tons, the newest vessel from fast-growing MSC Cruises is of a size that would have been unthinkable just a couple decades ago.

Unveiled last month at a gala ceremony in Southampton, England, the 19-deck-high giant of the seas, dubbed MSC Bellissima, is nearly three times larger than the biggest ship the line had in service as recently as 2005. It’s so big it has its own indoor mall, called the Galleria, lined with restaurants, bars and shops. Its top deck has three different pool areas plus a separate, sprawling Aquapark with multiple water slides. It can hold more than 5,000 passengers.

Still, it isn’t even the biggest ship MSC Cruises is launching this year. In just seven months, the Europe-based line will roll out the 181,000-ton MSC Grandiosa. Meaning “grand” in Italian (the native language of the line’s founders), it’ll stretch 53 feet longer than the 1,033-foot-long MSC Bellissima and hold more than 6,000 passengers. It’ll be followed in 2022 by even bigger MSC Cruises vessels measuring more than 205,000 tons and with room for nearly 7,000 passengers.

MSC Cruises, which as recently as 2008 didn’t have a single ship over 100,000 tons, is in the midst of its go-bigger-or-go-home moment. And it’s not alone. Three other major brands — Carnival Cruise Line, Costa Cruises and P&O Cruises — are hitting the supersize button as the big-ship boom of recent years enters a new phase.

Even longtime industry executives are amazed at the growth.

“I’ve been immersed in the business my whole life, and I still go, ‘Oh my god’ when I see these new ships,” said Rick Sasso, the 69-year-old chairman of MSC Cruises USA, the North American arm of MSC Cruises.

The former CEO of Celebrity Cruises and one-time Costa Cruises executive told The Points Guy he couldn’t have imagined ships would get this big when he got into the business 47 years ago. Back then, he said, the typical cruise ship size was about 20,000 tons. That's about a tenth the size of today’s giants.

It's a shift that may have been inevitable, at least once cruising began taking off in the 1980s and 1990s. With bookings for cruise vacations growing at double-digit rates, the industry needed a lot more capacity, which bigger ships supplied. Bigger ships also turned out to be a lot more efficient to operate.

As the 1990s progressed, major lines such as Carnival, Princess and Royal Caribbean began going ever bigger with new ships, leap-frogging each other in a race for the top spot that saw the world’s biggest cruise vessels jump from around 77,000 tons to 137,000 tons in just a few short years. Then things really took off in the 2000s, with vessels surpassing 150,000 tons and then 225,000 tons.

But it wasn’t just dollar signs driving the trend. In fact, better economies of scale weren’t even the main factor pushing the relentless rise in ship size, Chiron said. More than anything, it was demand from customers. As Chiron and others in the industry note, bigger vessels allowed for a lot more on-board features, and it turned out that’s exactly what customers wanted.

In recent years, Royal Caribbean has tapped into such demands like no other line — and been richly rewarded for it. In 2009, Royal Caribbean unveiled the 225,282-ton Oasis of the Seas, which at the time was 46% bigger than the next-biggest cruise vessel. It was a huge hit with consumers, drawing in a new, mega-resort-loving crowd to cruising and selling for premium prices. The line has since rolled out three additional ships in the series, each a little bigger than the last.

Called the Oasis Class, these vessels include the recently-unveiled, 228,081-ton Symphony of the Seas — the world’s biggest cruise ship. Soaring 18 decks high and nearly 1,200 feet long, it’s home to a dizzying array of pools, water slides, rock climbing walls, surfing simulators, a miniature golf course, a basketball court and an adults-only solarium. And that’s just on its top decks. The inside of the ship features dozens of restaurants and bars, Broadway-quality shows, a comedy club, a mall-like promenade and, yes, even an ice-skating rink. There’s also a tree-lined outdoor area called Central Park that’s lined with additional restaurants, bars and shops.

Hodges-Bethge noted that, when planning the Oasis Class, Royal Caribbean never set out to build the world’s biggest ships. Bigger is just “what happens once you develop and provide all the features and benefits [that] guests want.”

It’s a formula that other lines now are copying. The big news at Carnival has been the development of Mardi Gras, a 180,000-ton floating mega-resort that will be around 35% bigger than the biggest ships now in the Carnival fleet. It’ll debut in 2020.

And a new flagship for Costa Cruises arriving later this year, Costa Smeralda, will be nearly 36% bigger than its nearest sibling. P&O Cruises is going about 28% bigger with its next vessel, Iona.

This latest phase of the big-ship boom isn’t just playing out among the big-ship operators. Even lines such as Seabourn that are known for relatively small vessels are going bigger. While still a fraction of the size of an Oasis Class ship at 40,350 tons, the two newest Seabourn vessels are about 25% bigger than anything the line ever has operated before.

So, will the trend continue? And just how big can cruise ships get?

A Royal Caribbean executive recently hinted to The Points Guy that two ships it currently has on order will be at least a tad bigger than the current size leader. But probably only by a small margin. And there are factors that may soon reign in the relentless growth in ship size.

For starters, the world’s biggest ships have ballooned to a size where they can just barely fit under key bridges around the world.

Royal Caribbean’s 236-foot-tall Oasis of the Seas, for instance, can squeak under Denmark’s Great Belt Bridge with just half a foot to spare — and that’s after lowering a retractable funnel. The bridge is at a bottleneck into much of the Baltic Sea, which means that any vessel taller than Oasis of the Seas would be forever blocked from cruising in the Baltic.

Ships much taller than Oasis of the Seas would also be blocked from visiting New York City, one of the world’s most important cruise ports. Oasis of the Seas has about 15 feet to spare with its funnel retracted when it passes under the Verrazzano-Narrows Bridge at the entrance to New York Harbor.

Other factors that cruise lines must consider when contemplating bigger ships include the depth of the water and length of the piers at key ports as well as the size of turning basins (the space allocated at a port for ships to maneuver.) As ships get longer and sit deeper in the water, the number of off-limits ports increases.

That said, many of the important cruise ports around the world have been making changes to accommodate these massive vessels, noted Greg Purdy, Royal Caribbean’s senior vice president for marine operations.

In building bigger, “You may limit the number of ports you currently can go to, but there is always development (at the ports),” he explained.

Another important factor in the decision to go bigger with ships is the state of the tourist infrastructure available in the “home ports” where the vessels would be based. Such things as airlift capacity and even bus capacity for transfers is a consideration.

“There are only a few ports in the world that can handle the Oasis Class,” said Chiron, who suggests the move to bigger ships has begun to play out. “It just doesn’t seem that going much above 200,000 [tons] is really optimal because of the limitations.”

Chiron sees ships in the 100,000- to 140,000-ton range as having really been the sweet spot for the industry. They’re big enough to have a lot of on-board options but not so big that they’re limited in where they can go, he said.

“They’re able to pack a lot into the ships (of that size), but they still can visit pretty much anywhere in the world,” Chiron said.

But he admits there’s nothing quite like being on one of the giant Oasis Class ships.

“I don’t care what ships you’ve sailed on or what hotels you’ve stayed in. Until you have sailed on an Oasis Class ship, you ain’t seen nothing yet,” he said.

“To see the four-story Royal Promenade going the length of the ship’s interior, the Central Park, the Boardwalk, the pools, the zip line, the merry-go-round and the Aqua Theater at the back ... It’s just astounding,” he said. “It never gets old.”

Related stories
Save money with these travel-related offers on your credit cards this month
Use these shopping portal bonuses to earn extra miles this holiday season
Using miles and points to book airline tickets and hotels for others
Maui magnificence: A review of Kaanapali Alii, a Destination by Hyatt Residence
Featured image by Getty Images/fStop