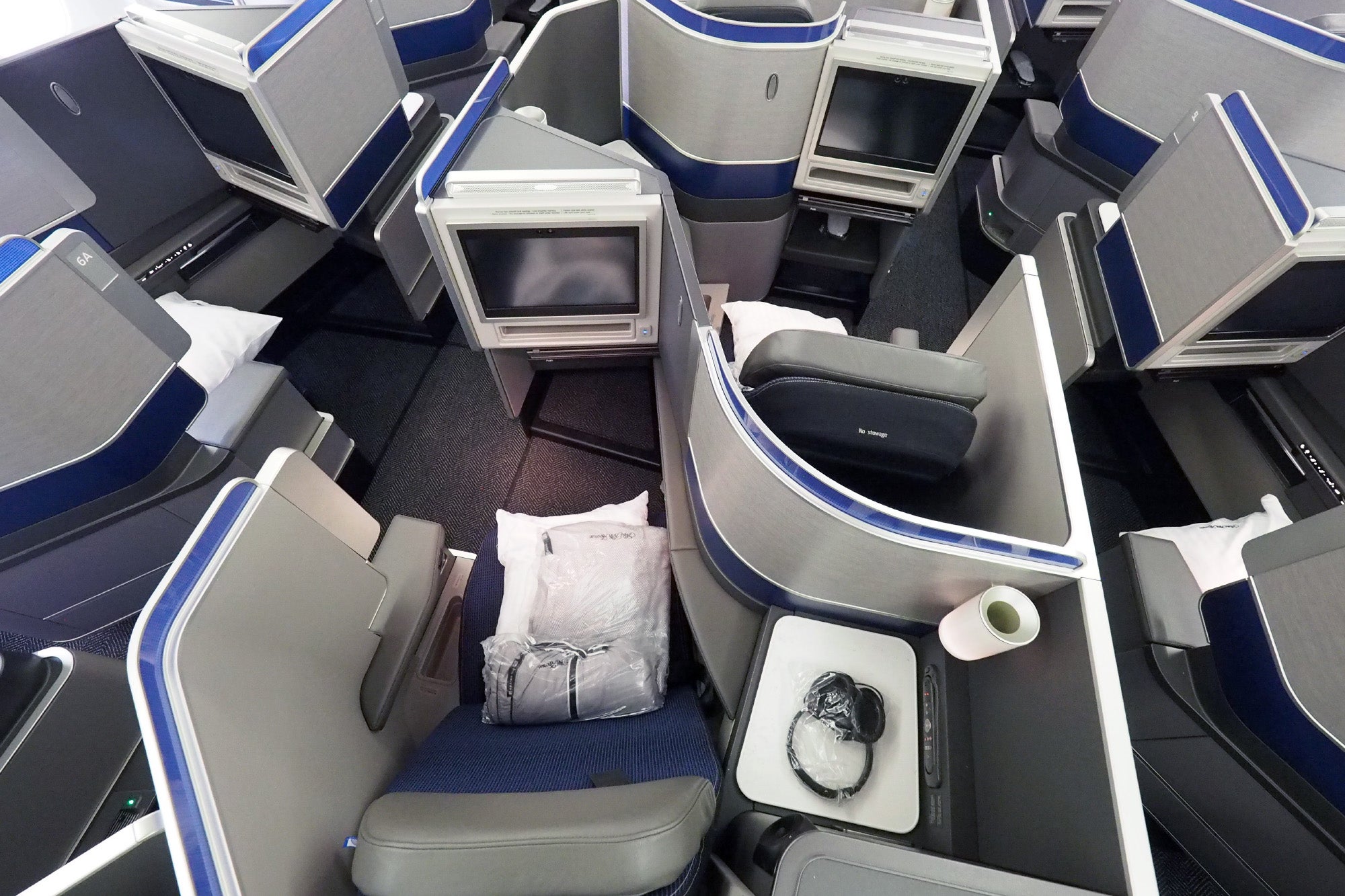 As one of the largest airlines in the world, United operates hundreds of planes, ranging in size from the 126-passenger Boeing 737-700 to the behemoth Boeing 777-300ER, with a total of 366 seats from nose to tail.

When it comes to flights with the United States, any of United's mainline jets can make a cross-country trip without a stop. But as with American Airlines and Delta, the airline still decides to operate its long-haul international aircraft on far shorter domestic flights.

If you land one of United's long-haul jets on a domestic flight, you'll be in for a treat — especially in the business-class cabin (sold as "first class" on domestic routes). While perks like amenity kits, menus and multi-course meals won't be available, except on premium transcontinental flights, you do get the same "hard product" — a lie-flat seat, on-demand entertainment and, on most planes, a roomier cabin feel.

As the months go on, more and more of these planes will offer premium-economy cabins as well, and those seats should be priced as Economy Plus on domestic flights, and available free of charge to elites. So you could end up with a domestic first-class-like seat even if your lie-flat upgrade doesn't clear.

Note that many of United's 777s now have 3-4-3 seating in coach, though, with seats that are narrower than what you'll find on many single-aisle planes. Larger planes also take far longer to deplane, especially if you're seated in the back.

That said, some wide-body planes, including the 777 and 787 Dreamliner, offer faster cruise speeds — on longer flights, that could translate into less time in the air, and earlier arrivals.

In addition to the first-class recliners you'll find on most of United's flights within the US, the airline operates three types of lie-flat seats on its international fleet and domestic 777-200ERs. I'll break them down below.

United's latest business-class seat, called Polaris, is available on all of the carrier's 777-300ERs, plus a small number of 777-200s and fewer than a dozen of the airline's 767-300ERs. United has committed to rolling out one new Polaris-equipped plane every 10 days (on average), so we'll be seeing this seat far more often as the weeks and months go on. Here's where you can find it flying today:

Continental has offered lie-flat seating on its international flights for years, primarily on routes to and from Houston and Newark. While hardly industry-leading, I've enjoyed my many flights in United's "ex-Continental" business class, typically arranged in a 2-2-2 configuration and found on all of the aircraft below. These seats are still most commonly found flying out of Houston and Newark, just as they had been before the merger.

I'm not going to sugarcoat it — United's old lie-flat business-class seat is garbage. It's arranged in a ridiculously dense 2-4-2 on the airline's 777s, and while these seats are quickly disappearing as part of the retrofit process, UA decided to keep them around on its fleet of domestic 777-200ERs, used primarily for flights to and from Hawaii, along with some peak-season Europe routes from the East Coast. While it's fine for the 90-minute hop between Newark and Chicago, I wouldn't be thrilled to land this seat on a longer flight.

To that end, here's which configurations you'll want to avoid:

Where to Find the Big Birds

On hub-to-hub routes, these planes are often used for positioning flights — an international aircraft may need to be moved domestically each day in order to maximize utilization. If that's the case, it's not uncommon for a plane to operate only in one direction — for example, United flies a 787-8 Dreamliner from San Francisco (SFO) to Washington, D.C. (IAD) several times a week, but never on the reverse. That's because the plane typically arrives from Europe, and then flies on from Washington to a destination in Asia, rather than returning to the West Coast.

They'll also occasionally be subbed in to operate replacement flights during irregular operations. For example, during recent storms near Chicago (ORD) and Newark (EWR), United's 767-300s operated one-off flights between Newark and Cleveland (CLE), Chicago and Las Vegas (LAS) and even Cleveland and Orlando (MCO). But it's next to impossible to predict these flights, and they're often full with displaced passengers following a slew of cancellations.

Ignoring those one-off flights, and other routes that may have a lie-flat plane assigned only once in a blue moon, lands us 15 airports with regular international-aircraft service.

For years, United has offered international-style service between the New York City area and Los Angeles and San Francisco, and in 2017 the airline brought that same experience to flights between Boston and SFO. That means multi-course meals with menus, proper bedding and lie-flat seats on all flights. As rumor has it, LAX may be added soon, too.

As United's Midwest hub, Chicago's been a key city for years. It's also home to the carrier's corporate headquarters. Most of UA's lie-flat flights operate to the carrier's other major hubs, since they're used to reposition aircraft, but United's domestic-configured 777-200s fly from Chicago to Honolulu each day, along with seasonal service to Maui.

Denver is another United hub, and a gateway to Hawaii. With flight times exceeding seven hours, all of those Hawaii flights offer lie-flat seats, but UA also flies an international aircraft to Orlando each day, giving passengers an opportunity to give business class a try on a low-cost leisure route.

Given how far Hawaii is from the mainland, offering a premium experience makes quite a bit of sense. For some destinations, like Chicago and Washington, DC, United doesn't have a choice but to use its long-range planes, too.

Houston offers several domestic lie-flat options every day — most are headed to Newark, where they may continue on to long-haul flights, but the daily Las Vegas turn definitely stands out as a unique addition, given that LAS is not a hub, and it's less than three hours away.

Hawaii's Big Island gateway offers regular flights to LAX and SFO as well, but United's flight to Denver is the only one to get the airline's lie-flat treatment.

At one point, United offered regular 757-200 service between Newark and Las Vegas as well, but now the airport's only UA lie-flat daily heads to Houston, a 3-hour hop to the southeast.

Like Kona, Kauai's one regular lie-flat United flight heads to Denver, though it's not unusual to see lie-flat 757s pop up on other routes during peak periods. I flew a United 757-200 from LIH to San Francisco a couple years ago, for example.

Like American and Delta, United offers many daily lie-flat flights from LAX to the New York City area — Newark in this case. The carrier also operates a daily 777 flight to Honolulu, along with Denver, plus a Dreamliner flight to Houston and an (almost) daily 757-200 to Washington, DC.

Believe it or not, United operates nonstop service from Newark to Alaska on Saturdays in the summer — and, given the flight's nearly 8-hour length, an older 737 can't make the trip. Beyond that, all of the carrier's distant hubs get lie-flat flights, along with Honolulu, Orlando and Puerto Rico.

Florida's theme park capital is very well connected throughout the US, and in the case of Denver and Newark, the airport even gets daily lie-flat service. Since it's most often a leisure route, complimentary upgrades can be plentiful here.

United's largest West Coast hub is the carrier's gateway to Asia, so it's no stranger to wide-body planes. Some aren't headed across the Pacific, though — the airline operates regular 777 and/or 787 service to Boston, Denver, Newark and Washington, D.C., along with a handful of domestic 757-200 flights and up to three daily 777s to Honolulu.

Another unexpected lie-flat is United's daily 767-400 flight from the New York City area to San Juan. Since this is largely a leisure destination, with very low fares in both cabins, the carrier's cargo operation likely deserves most of the credit here. Still, passengers win — the 767 is an especially comfortable upgrade in first class and economy, alike.

Last but not least, United's secondary East Coast hub outside Washington, D.C. handles quite a bit of passenger traffic to Europe, with a flight to Tel Aviv on the way as well. Domestic passengers benefit from repositioning and utilization flights between most of the US hubs, bringing a handful of opportunities to snag a lie-flat seat without hopping across the Atlantic.

As a very frequent flyer, I'm almost never surprised when I come across a wide-body plane on a domestic flight — in most cases, the chance to book a lie-flat seat at the fraction of the regular cost is the reason I'm onboard. It's always fun to see how other passengers react when they encounter a far larger plane than they were expecting, though — as a kid, there's no better way to get to Disney World than a lie-flat seat you scored thanks to mom or dad's elite status!

That said, all of the routes above are subject to change — while these destinations and frequencies are current as of August 2018, United could add and remove wide-body planes from domestic flights on a whim, especially on routes where the carrier doesn't market an international-like product. If you spot a wide-body plane assigned a day or two before departure, though, you should certainly be good to go.