Inside a United 777 Relief Flight Carrying 51,000 Pounds of Donations to Puerto Rico 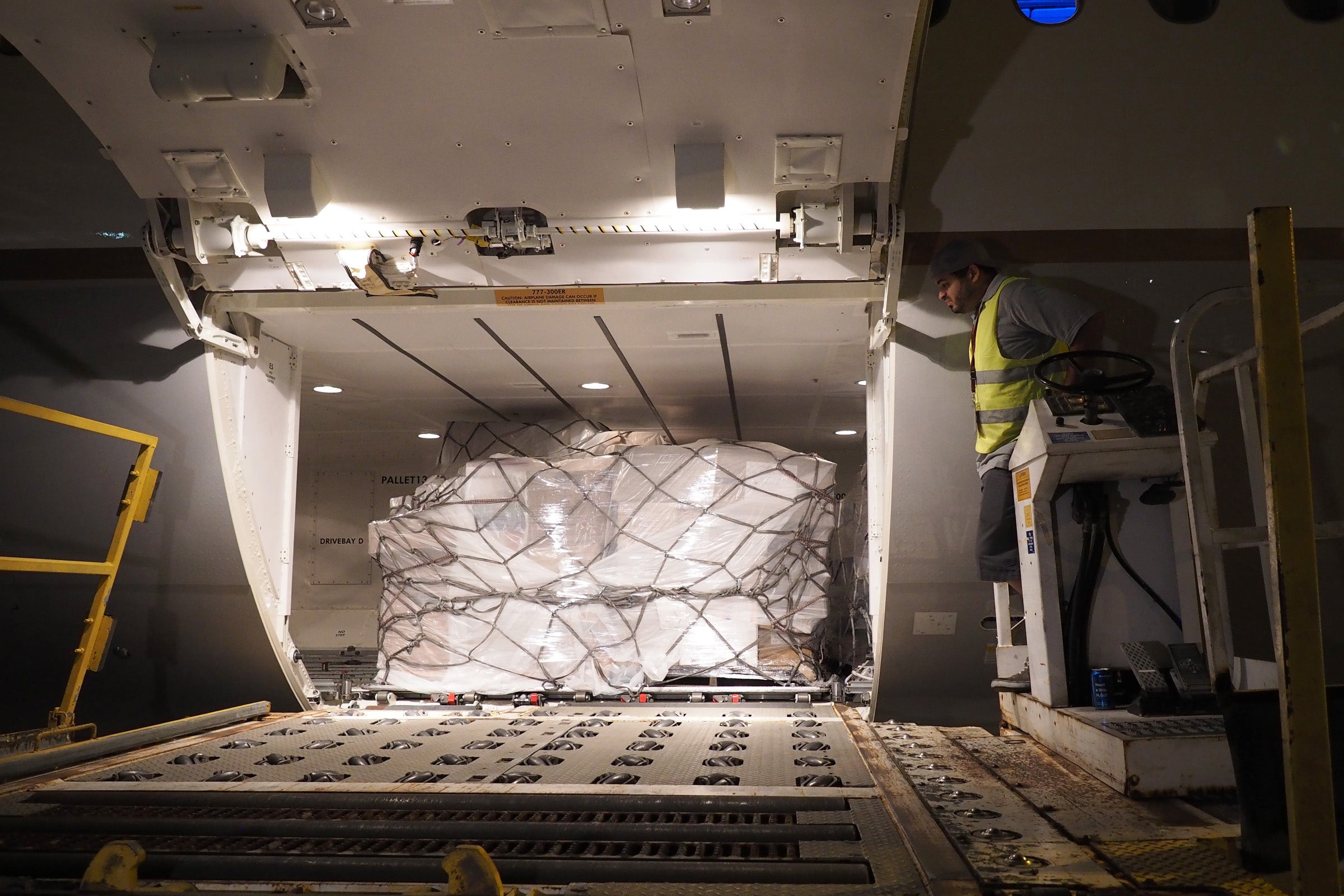 Puerto Rico desperately needs our help. Airlines and individuals alike have been stepping up by offering to carry relief supplies free of charge, either on airliners or their private planes, and while aid is reportedly still struggling to make its way to smaller inland towns and villages, there's a steady stream arriving on the island by plane and boat.

Thursday, I spent the day at San Juan's international airport, getting a feel for JetBlue's operation — including its fantastic employee storehouse — and covering the arrival of a relief flight bringing 51,000 pounds of donations from Houston residents to Puerto Rico. This particular relief effort was organized by the City of Houston, the Houston Astros and other local groups, with cargo space on a 777-300ER donated by United.

US airlines have already carried several million pounds of relief, but this is hardly the end of the line. There's still a need for your help, too:

On Thursday, United Flight 1297 from Houston (IAH) to San Juan (SJU) was originally scheduled to be operated by a 737-800 with just over 150 seats. Following the City of Houston's request for a relief flight, United swapped in a 777-300ER, increasing cargo capacity tremendously and more than doubling the number of available seats.

Most of the seats were blocked on the flight from Houston to San Juan so the plane could accommodate even more cargo plus fuel for the return flight to Houston, because fuel at SJU is still scarce. On the return flight out of SJU, all seats were available but more than 60 ended up going out empty even with all passengers accommodated. At this point, anyone looking to leave Puerto Rico is able to get on a flight, typically even on the same day.

While the flight was originally scheduled to arrive around 4:00pm, it didn't actually pull up until after 8:00pm, following a lengthy maintenance delay on the morning flight from Chicago to Houston.

A number of prominent Houstonians were on board, including William Paul Thomas from the Houston mayor's office and City Council members Karla Cisneros and Amanda Edwards.

The three government officials spent some time examining cargo operations on the ramp in San Juan, with council member Amanda Edwards taking questions from a Houston-based reporter below.

After a couple photo ops on the ground, the group was invited to walk inside the cargo hold.

I've seen cargo holds up close, but I've never been inside the belly of a 777-300ER, so this was quite a treat.

Inside, members of the Texas delegation examined the relief supplies and posed for a few more photos.

Pallets were unloaded one by one and were quickly driven away. Some supplies in particular, such as water filters, are in urgent need.

This pallet alone tipped the scales at 2,794 pounds, representing some 5.5% of the total shipment.

With the late inbound aircraft and extra cargo to unload, our departure from San Juan ended up being delayed nearly five hours, from 4:50pm to 9:45pm.

Passengers were incredibly patient, though, both in the terminal and on the jet bridge. Surviving the aftermath of Hurricane Maria makes a five-hour flight delay seem insignificant.

Once it was time to board, it was immediately clear that passengers were surprised to see the 777-300ER.

There were lots of oohs and ahhs, from economy and Polaris passengers alike.

While the San Juan airport terminal is in decent shape overall, the 777 cabin was a welcome treat after days without running water, electricity and fresh food.

A large number of passengers ended up getting upgraded to business class, which was surely a nice treat.

United's been operating relief flights to San Juan almost ever day since the airport reopened following the hurricane. In addition to Thursday evening's flight, the carrier has operated the following:

Saturday, 9/23 – One humanitarian flight from Newark with 46,600 pounds of food, water and amenity kits for employees, as well as life-saving blood and relief items for the American Red Cross.

Sunday, 9/24 – One humanitarian flight from Washington Dulles with 50 skids of blankets and other supplies from the American Red Cross.

Monday, 9/25 – One humanitarian flight from Chicago O’Hare that delivered more than 79,000 pounds of water, food, diapers, rope, tarpaulins and nearly 50 power generators. The 777 returned with 300+ evacuees.

Wednesday, 9/27 – Two revenue flights out of ORD and EWR to San Juan. Combined, both flights were loaded with over 117,000 pounds of humanitarian supplies and flew back with over 500 passengers.

Thursday, 9/28 – Two revenue flights out of ORD and EWR to San Juan. Combined, both flights were loaded with over 141,000 pounds of humanitarian supplies and flew back with over 500 passengers.

Friday, 9/29 – Two revenue flights out of ORD and EWR to San Juan with a total of 121,000 pounds of humanitarian supplies and returning with over 500 passengers.

Saturday, 9/30 – Two revenue flights out of ORD and EWR to San Juan. Combined cargo was 31,800 pounds of humanitarian supplies and flew back with over 500 passengers.

Sunday, 10/1 – Two revenue flights out of ORD and EWR to San Juan. Combined cargo was 84,000 pounds of humanitarian supplies and flew back with over 500 passengers.

Monday, 10/2 – Two revenue flights out of ORD and EWR to San Juan. Combined cargo was 34,800 pounds of humanitarian supplies and flew back with over 500 passengers.

Wednesday, 10/4 – Three total flights to San Juan. One flight out of ORD had nearly two dozen Chicago Firefighters to offer assistance. One flight out of EWR was a humanitarian flight that had over 300 skilled volunteers — nurses, doctors, electricians, truck drivers, engineers — to help with relief efforts and the rebuilding of Puerto Rico. The 777 also contained over 51,800 pounds of supplies and flew back to EWR with over 200 evacuees.

This is in addition to the 777-300ER flight covered here — on Thursday, October 5 — which carried aid workers and 51,000 pounds of donations from Houston to San Juan.

Of course, United isn't the only carrier supporting relief efforts in Puerto Rico. JetBlue has built out an incredible supply for its employees, in addition to carrying relief for other Puerto Ricans, and American Airlines has carried a total of 1.1 million pounds of cargo to the island as part of its own efforts to date.

For more on how you can help Puerto Rico, see: