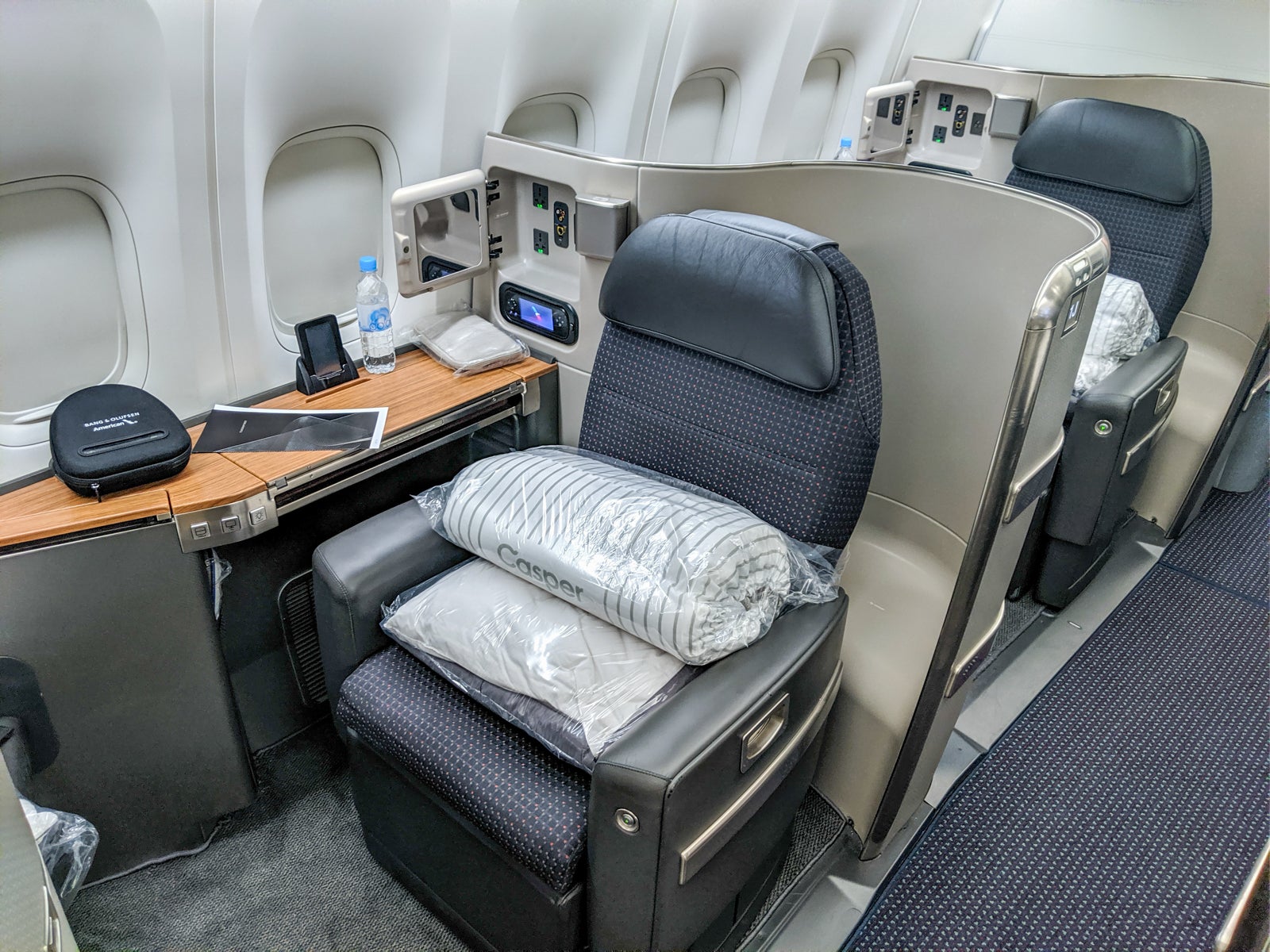 Editor’s note: TPG suggests you talk to your doctor, follow health officials’ guidance and research local travel restrictions before booking that next trip. We’ll be here to help you prepare, whether you’re traveling next month or next year.

There's no doubt that the holidays will look different this year. Not everyone is ready to travel yet, but if you're flying over the next few months, there are steps you can take to get extra space on board.

One option would be to fly in a lie-flat seat — and you don't have to break the bank to do so.

With most long-haul flying still suspended due to COVID, airlines have been using more of their internationally-configured planes on domestic flights. As a result, you can now find lie-flat seats on shorter routes, such as Newark (EWR) to Orlando (MCO) and Chicago (ORD) to Philadelphia (PHL). Even better, airlines aren't charging a premium for selecting flights with lie-flat seats, as opposed to those with the usual domestic first-class recliner seats.

We did some digging and found business and first-class flights with lie-flat seats available from under $200 each way, including on peak travel dates around holidays like Christmas and New Years.

Here's a roundup of some of the best domestic lie-flat deals available.

Some of the cheapest deals are being offered by United. For instance, throughout the holiday season, you can fly between Denver (DEN) and Chicago (ORD) from just $178 each way in lie-flat first class.

Not all flights on this route offer lie-flat seats, however. You'll need to pick flights #500 and #1259 (DEN to ORD) or #407 and #2465 (ORD to DEN) and make sure your flight is operated by a 777-200. Just note that these flights, unfortunately, don't feature United's fancy new Polaris seats, but rather the original seats arranged in a 2-4-2 configuration — albeit fully lie-flat.

Planning to spend New Years in Florida? You could fly lie-flat between Newark (EWR) and Orlando (MCO) from just $203. Pick flight #245 (EWR to MCO) or flight #1992 (MCO to EWR) and make sure your flight is operated by a 757-200. United usually flies this plane on premium transcontinental routes, such as Newark to Los Angeles (LAX).

If you want to fly a lie-flat seat with direct aisle access (read: more space to socially distance), you could fly on American's 787-8 between Chicago and Philadelphia (PHL) for $213. If you're lucky, you might even get to fly American's ‘enhanced’ business-class seats, which have retractable privacy dividers between the center seats. American is offering the 787 on flight #324 (same flight number for both directions).

But for a real treat, you'll want to fly between New York-JFK and Miami (MIA) on American's flagship Boeing 777-300ER. These planes are equipped with American's best seats, from first class to business class to premium economy to coach. However, because American only sells two classes of services on this route, business class passengers can choose seats in what is usually the first-class section and economy class passengers can select premium economy seats as Main Cabin Extra (which are free for most elites).

Related: How I plan to socially distance when flying

Related: Here’s what food and drinks you can expect on your next flight

In case you haven't noticed, all of the deals discussed so far were from American and United. Now, that's not to say that Delta isn't offering lie-flat seats on domestic routes. However, based on our searches, they're much more expensive. For instance, a lie-flat Delta seat we found was from Atlanta (ATL) to New York-JFK for $368. On the bright side, Delta is blocking middle seats through early 2021, so space shouldn't be an issue — even if you're flying coach.

How to tell if your flight will offer lie-flat seats

One of the easiest ways to tell if a flight will offer lie-flat seats is by using Google Flights. As you can tell from the screenshots above, when searching for flights, Google Flights will list what type of seat will be offered, as well as amenities such as Wi-Fi. Your next best bet would be to head to the airline's website and check the plane type and seat map. Although not always, cabins with lie-flat seats often have a 1-2-1 configuration.

Just be sure to monitor the aircraft type in the days leading up to departure as airlines often make last-minute equipment swaps.

Related: Guide to finding the plane you’re flying on

You don't need to shell out thousands of dollars to fly lie-flat this holiday season. Although you won't get all the soft perks of international business or first class, such as premium bedding and multi-course meals, you'll get to enjoy a more comfortable seat and more privacy.

The Capital One Venture Rewards Credit Card is also a great option, since it allows you to redeem miles toward travel purchases, including airfare. The card currently offers 75,000 bonus miles after you spend $4,000 on purchases within the first three months of account opening.

Check out this post for more on maximizing airfare purchases.

Related stories
Lower fuel surcharges: Reward Flight Saver rolled out on all British Airways flights
6 credit card perks you can gift for the holidays
Flying Blue introduces an interactive map with entry award rates, officially adds stopovers: What you need to know
Man overboard: Cruise ship overboards and how they happen
Featured image by American Airlines First class (Photo by JT Genter/The Points Guy)
Editorial disclaimer: Opinions expressed here are the author’s alone, not those of any bank, credit card issuer, airline or hotel chain, and have not been reviewed, approved or otherwise endorsed by any of these entities.

Our points-obsessed staff uses a plethora of credit cards on a daily basis. If anyone on our team wouldn’t recommend it to a friend or a family member, we wouldn’t recommend it on The Points Guy either. Our opinions are our own, and have not been reviewed, approved, or endorsed by our advertising partners.
See all best card offers
Related stories
News
Lower fuel surcharges: Reward Flight Saver rolled out on all British Airways flights
Guide
6 credit card perks you can gift for the holidays
News
Flying Blue introduces an interactive map with entry award rates, officially adds stopovers: What you need to know
Guide
Man overboard: Cruise ship overboards and how they happen