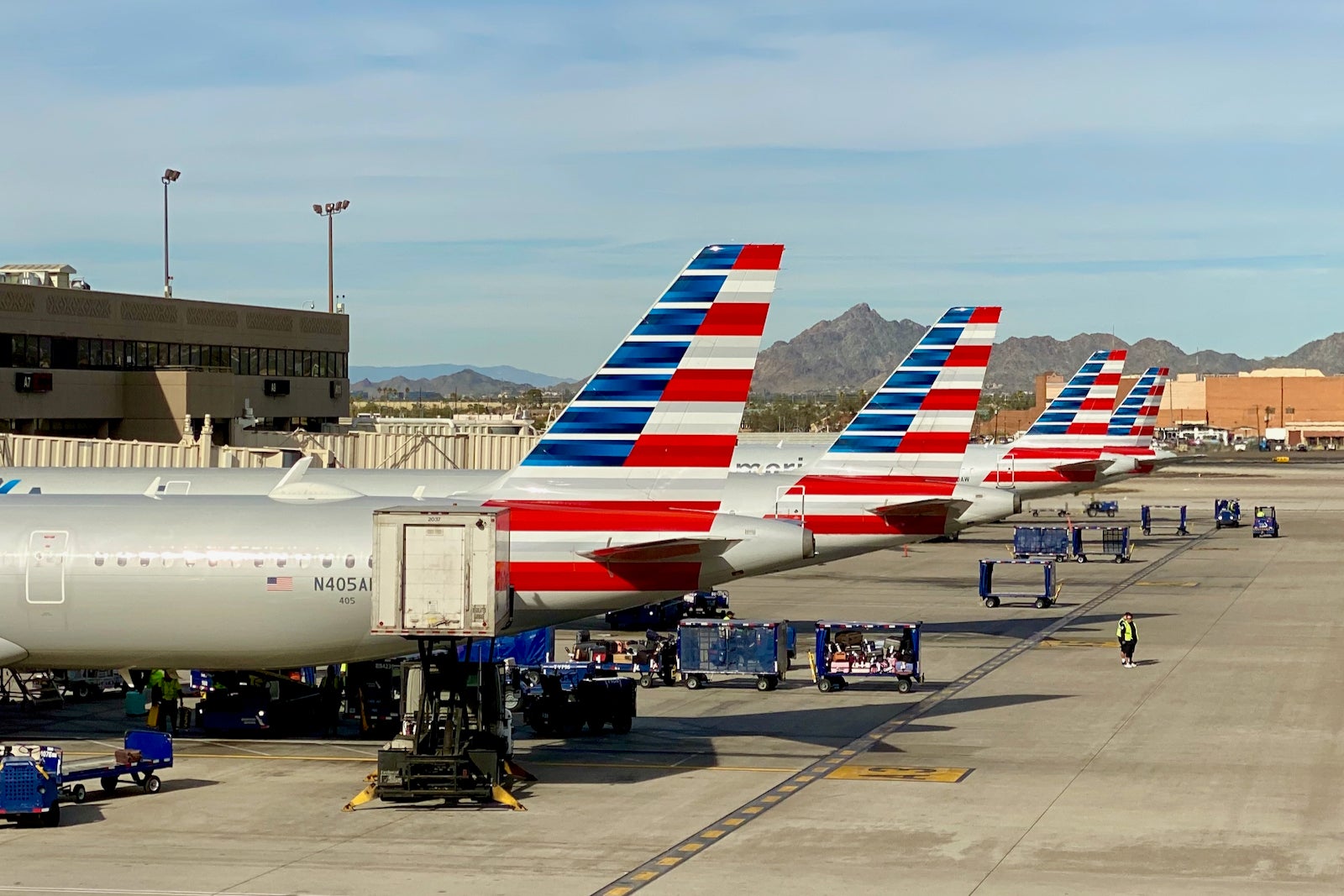 Exclusive: American's loyalty chief hints at AAdvantage improvements you'll see in 2021
This post contains references to products from one or more of our advertisers. We may receive compensation when you click on links to those products. Terms apply to the offers listed on this page. For an explanation of our Advertising Policy, visit this page.

There's a new boss in town — if you're working in loyalty at American Airlines.

Back in June, the Fort Worth-based carrier announced a major executive-level reshuffling. As part of the news, long-time AAdvantage chief Bridget Blaise-Shamai will leave the company by the end of 2020. That left some big shoes to fill, but American turned to another seasoned company executive for the role.

Rick Elieson took over AAdvantage from Blaise-Shamai. Elieson, a 26-year veteran of the airline, has been in this new customer-facing position for five months.

In an interview with TPG, Elieson discussed his background, his perspective on the future of the program and more. What follows are seven key takeaways that should matter to every American flyer.

Cargo and loyalty are more similar than you think

Elieson has had a storied career with AA. In 1994, he began his journey as an analyst, working his way up the rankings across multiple business units. He's spent time with revenue management, pricing, loyalty, cobrand partnerships and, most recently, cargo.

You might wonder how being president of cargo prepared Elieson to lead a loyalty program worth more than Airbnb. So did I.

Elieson explained "Cargo [like loyalty] is a billion-dollar business. It has a really positive culture and there is a blend of people in that vertical." More generally, "having held more than a dozen jobs at American builds empathy, which gives me an understanding of what it takes to get things done," he continued.

And Elieson is coming out swinging. Less than six months into his presidency, he's already worked on some major policy adjustments. American has rolled back restrictions on basic economy, permanently eliminated most change fees (including on awards) and announced updates to the loyalty program for 2021.

How the pandemic is changing loyalty

Since taking the helm of AAdvantage, Elieson has interviewed some customers to hear how they're faring. His biggest takeaway? "A lot of people are eager to travel, but not yet comfortable doing so."

That may not be a huge surprise in the middle of a pandemic, but it underscores the challenges faced by both American and its loyalty program.

To Elieson, the "silver lining" of the pandemic is getting new customers on AA flights. "You have people trying out the product," he explained. The opportunity now is to "take people who are new to American and get them indoctrinated in the program... I'm a big believer in lifetime value. The new customer has the greatest potential value."

AA isn't just working to meet existing flyers where they are on their return-to-travel journey. The carrier is focused on wooing the first-timers as well.

Award charts are here to stay

"I have no plans, nor desire, nor need to eliminate award charts."

That should be music to frequent flyers' ears. In recent years, American's two biggest competitors — Delta and United — have ditched their award charts in favor of dynamic pricing.

American hasn't totally bucked the trend. The carrier has placed an increased emphasis on revenue-based Web Special awards that are now accounting for almost two-thirds of all redemptions, according to Elieson. But even with Web Specials growing in relevance and popularity, American has continued to publish award charts.

But, Elieson doesn't necessarily understand "why award charts have so much meaning for folks." He recognizes that "people need some line in the sand to aspire towards dream destinations. They want to know how many miles it will take."

But traditional award charts aren't necessarily the best representation of those goalposts. "What's more valuable is showing the median award that was required, some critical mass or range where most people are burning their miles," Elieson continued.

Fortunately, Elieson is committed to award charts — "there's a desire to continue publishing them," he quipped. If anything changes, I'd expect AA to adopt something similar to Air Canada's new Aeroplan program. Aeroplan has two separate award charts; one for flying Air Canada and another for flying on partners. The former has ranges, while the latter has set prices.

Rebalancing of elite tiers is underway

On Jan. 1, 2017, American launched a new elite tier, Platinum Pro, designed to match Delta’s and United’s Platinum level. But in the three years since, Platinum Pro benefits have paled in comparison to the competition.

Specifically, both Delta and United offer their second-highest elites a confirmable upgrade instrument upon crossing the qualifying threshold.

Well, American is matching the competition beginning in 2021. Platinum Pro elites will get a pick from a new reward catalog once they achieve the status. Though the full details are still forthcoming, one of the choices will be a systemwide upgrade.

Platinum Pro isn't just getting a new benefit. The elite tier is predicted to get some new members, too.

As part of the elite status adjustments for 2021, American is offering the aforementioned credit-card spending waiver of the elite-qualifying dollar (EQD) requirement up to the Platinum Pro level.

Why not extend the waiver to Executive Platinum, American’s highest published tier?

Step one of the elite tier rebalancing begins in 2021. What happens in later years, including potential qualifying requirement adjustments, is anyone's guess.

In the years leading up to the pandemic, one of the chief complaints from loyal AA flyers has been the dearth of saver award availability.

Even in the midst of the pandemic — when flight loads are at historic lows — saver awards aren’t readily available on many routes. You can still score a great deal if you book a revenue-based Web Special award, but the pickings are often slim if you’re looking to redeem points with AA partners.

Well, that could soon change. According to Elieson, expanded saver availability is “one of the areas where closer affiliation with revenue management — where I spent a dozen years of my career — is going to pay dividends... You should think about the influence loyalty will have on revenue management.”

"We are making changes in the way in which we value and evaluate redemption travel to improve access to saver space," he continued.

What could that mean, exactly?

Hopefully, Elieson can follow through. “I know that sounds ambiguous and it's a little weird to evaluate or measure right now,” he admitted, though scores of AAdvantage members are undoubtedly hoping he can pull it off.

Family pooling is being considered

A few select loyalty programs allow you to share miles and perks with family members. At some point soon, you might be able to add AAdvantage to that list.

“I’m all for it,” Elieson said referring to a points pooling or family sharing feature. “This is a really intriguing concept."

“We just need to navigate how to avoid secondary markets and gaming,” he added, suggesting American is trying to avoid the de facto sale or bartering of miles by linked accounts.

Though it may take a few years for AA to introduce family sharing, the carrier is already planting the seeds.

When the new milestone rewards catalog launches in 2021, some of the reward options are items that you can bestow upon others, including Admirals Club day passes and more.

"I haven't yet cracked how to do family pooling in a way that doesn't create all types of headaches. I don't know when, but I'm confident we'll get there."

Related: These are the loyalty programs that offer family pooling

Adding partners is a top priority

As the new president, Elieson has laid out over 20 initiatives for the loyalty organization to tackle next year.

According to Elieson, one of the top three priorities is “to engage with existing customers and to find more ways for them to interact with us.”

In addition to "expanding everyday spend programs with the cobrand cards," Elieson is committed to "building an ecosystem of partners" — including shopping, dining and other airline partners. This could include a redesigned portal where AAdvantage members can earn miles for purchases at traditional retail stores and restaurants.

As to the other airline partners, Elieson promised "you'll see more of that news on the horizon." He couldn't (yet) divulge the details, but odds are that he's referring to AA's new Northeast-focused tie-up with JetBlue. The airlines have promised reciprocal loyalty benefits, and we can't wait to find out what they are.