Articles
Ethan Klapper is a senior aviation reporter at TPG who focuses on the operational side of the airline industry.
Follow
Sept. 27, 2022
•
11 min read 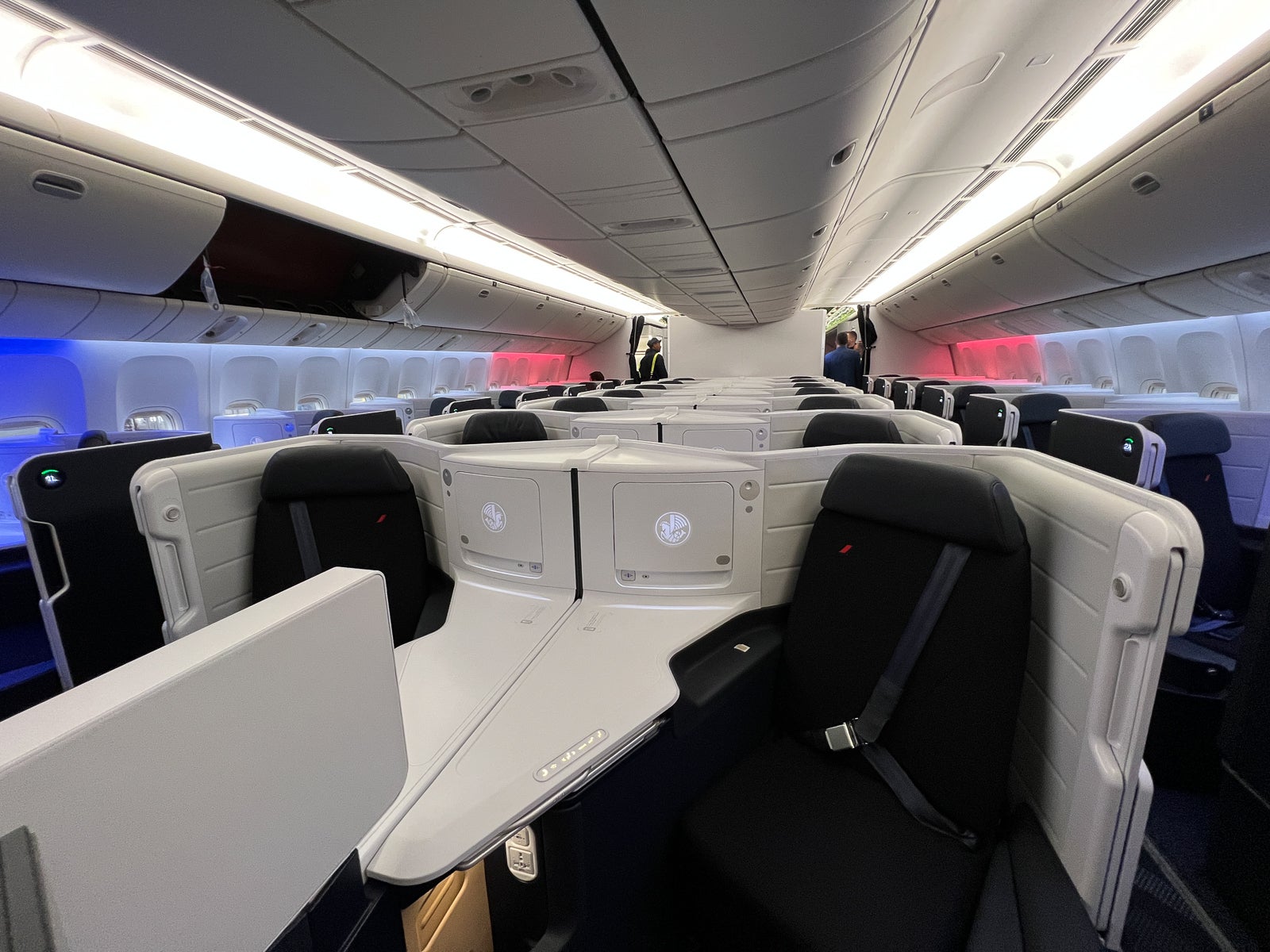 If you're flying between New York and Paris on Air France in the not-too-distant future, you could be in for a big upgrade.

The French flag carrier is soon set to roll out an updated cabin configuration on 12 of its Boeing 777-300ERs — the largest planes in its fleet. These 12 aircraft will feature a much-enhanced product across all three of its classes: Business Class, Premium Economy and Economy Class.

The new business-class seats, from French manufacturer Safran, aren't revolutionary (we're not talking about Qatar Qsuite here). However, they are the best Air France has ever offered and will be a highly competitive "hard product" for North Atlantic crossings. So far, Air France has announced only New York's John F. Kennedy International Airport (JFK) as a route for this configuration, but the carrier promises more city pairs to come.

If you're not lucky enough to snag one of the 48 reverse herringbone seats that are all angled toward the window, you can still enjoy an upgraded Premium Economy cabin. It's using the same seat that are on Air France's Airbus A350s, and the cabin has doubled in size to include the same number of seats as Business Class — 48. Even those seated in Economy Class will see enhancements.

TPG toured one of the first Boeing 777s to get the new seats on Tuesday at Air France's Orly Airport (ORY) maintenance base, Air France Industries. This aircraft, registration F-GZNS, was nearly complete, with mostly just ceiling panels missing in parts of the aircraft. The airline is converting two other aircraft at the moment, including one at Bordeaux-Mérignac Airport (BOD). Air France has yet to announce when the new configuration will enter service, and didn't provide many new details on Tuesday. Still, the airline implied that these aircraft will be hitting the skies very soon.

Here's your first look from a U.S. outlet showing Air France's new business class, as well as the other cabins in this configuration.

More from TPG: Fly to Europe for 9,000 Amex points when you stack Flying Blue Promo Rewards with a transfer bonus

The first thing that hits you when entering the new Business Class cabin from door two — the second set of doors on the aircraft that's commonly used for boarding — is the color. Air France's most comparable existing product is the Boeing 777-300ER which features the carrier's First Class product, La Premiere, and a whopping 58 reverse herringbone business class seats that are not dissimilar. However, that cabin uses very bright colors. Many feel it's sterile and lacks personality.

Sterile, this cabin is not.

Across the cabin — and the entire aircraft (even in the lavatories!) — is a primary tone of dark blue; this is something the carrier introduced with its new Airbus A220 aircraft. Also prominent is Air France's longtime symbol, l'hippocamp ailé. Air France-KLM CEO Ben Smith is said to be a big fan of the symbol, and wants to see it more prominently featured.

The carpet inspiration came from the A220 as well — designed to invoke the vibes of a Parisian apartment.

Parts of the new suites are lined with tan-colored French leather, a secondary color throughout the cabin.

The seat itself will be somewhat familiar if you've flown in Air France's 777s that currently feature 58 business-class seats — common on New York and other premium routes. But, it sports many enhancements to get excited about.

For the first time, Air France is offering a business-class seat with a door — joining the ranks of British Airways, SkyTeam and joint venture partner Delta Air Lines and, most recently, American Airlines.

Passengers can close the door using a large button inside the suite. It opened with a surprising amount of seemingly spring-loaded force — so be careful when using it. To open the door, it must be pulled back manually.

Once you get situated in the seat, the first thing that catches your attention is — not surprisingly — the massive 17.3-inch 4K display.

You can control it via touchscreen, or via a remote, that features a trackpad. The new system features Bluetooth pairing in all cabins.

Then, there's a USB-C and 110 volt outlet in front of the large table surface in the seat.

Finally, Air France is offering wireless charging on top of the table. With all those options, it's unlikely your devices will run out of juice on one of these flights.

The table — not to be confused with the tray table — is also where the seat's control panel is found.

This control panel features four recline functions. Reclining the seat into a fully flat bed — and vice-versa — was a straightforward process that was comparable to most other business-class seats on the market. The bed is about 28 inches wide and 6.5 feet long when reclined.

Hit the reading light button on that panel and — get this — it toggles the l'hippocamp ailé symbol on the storage compartment door on and off.

A reading light is also available in the seat, and it works exactly the same as the one that can be found in United's Polaris business class — by pressing to open it.

The final button on the panel is the "do not disturb button," which turns the light outside the seat from green to red.

Speaking of tables, the tray table pulls out from under the storage table, and then folds out.

The storage compartment, which is lined in that tan French leather, opens up to a pair of headphones. In practice, I find it a good place to store cables and amenity kits — as long as you remember to take them at the end of the flight. The door of the compartment also features a mirror.

The footwell is largely comparable to the existing one in Air France's 58-seat business class configuration.

However, there are eight incredible seats in this configuration: the four seats in row one and the four in row nine — the first and bulkhead rows of the cabin.

These seats feature extra room given the lack of seats in front of them, and they don't have a cut-out for your feet. The best part? Air France has no plans to charge extra for these eight seats, so be sure to snag them as soon as possible when booking a future Air France flight in this configuration!

Finally, for those who sit in the center two seats of this 1-2-1-configured cabin, a movable divider can be raised and lowered in case you're traveling with a stranger, or have had enough of your travel companion.

Overall, this new product has enough enhancements that make it worthwhile to book flights on it. More details to come on those flights once they're announced.

Over the years, a number of TPG reviewers have taken issue with Air France's Premium Economy. (One review put it bluntly: "stick to economy.") Now, Air France is bringing its latest Premium Economy product from the A350 to the 777 — and the company thinks it'll be enough of a hit that it's doubled the number of seats from 24 to 48 in this 2-4-2-configured cabin.

The seats, with about 38 inches of pitch, feature a respectable amount of recline. They also feature a leg rest and foot rest.

The new seat features a 4K display, like its Business Class counterpart. This screen is 13.3 inches.

Each Premium Economy seat is provisioned with high-end headphones. A gooseneck reading light is also available.

The seats feature adjustable headrests. The tray table folds out of the armrest, similar to many other Premium Economy offerings.

Perhaps the most notable feature of Air France's 3-4-3-configured Economy Class cabin is the screens. That's right — you can enjoy 13.3 inches of 4K entertainment, just like your Premium Economy counterparts. The new screens are likely among the best Economy Class screens out there.

Pitch in this section is around 31 inches — standard for a legacy carrier like Air France. The tray table in this section folds out from the seat in front of you and also has a cupholder — allowing you to enjoy a beverage without having to open the table up.

Instead of reinventing the wheel with its new business-class product, Air France took an already solid product and added more modern touches — along with some beautiful dashes of color. Things like wireless charging, 4K monitors and doors on the seat make this a desirable and competitive product. Everyone on the plane will benefit from some of these enhancements — at least with the monitors and Bluetooth audio pairing system. I look forward to trying this product out in the near future. It's an enhancement worth your while.

Related stories
Save money with these travel-related offers on your credit cards this month
Use these shopping portal bonuses to earn extra miles this holiday season
Using miles and points to book airline tickets and hotels for others
Maui magnificence: A review of Kaanapali Alii, a Destination by Hyatt Residence
Featured image by ETHAN KLAPPER/THE POINTS GUY
Editorial disclaimer: Opinions expressed here are the author’s alone, not those of any bank, credit card issuer, airline or hotel chain, and have not been reviewed, approved or otherwise endorsed by any of these entities.