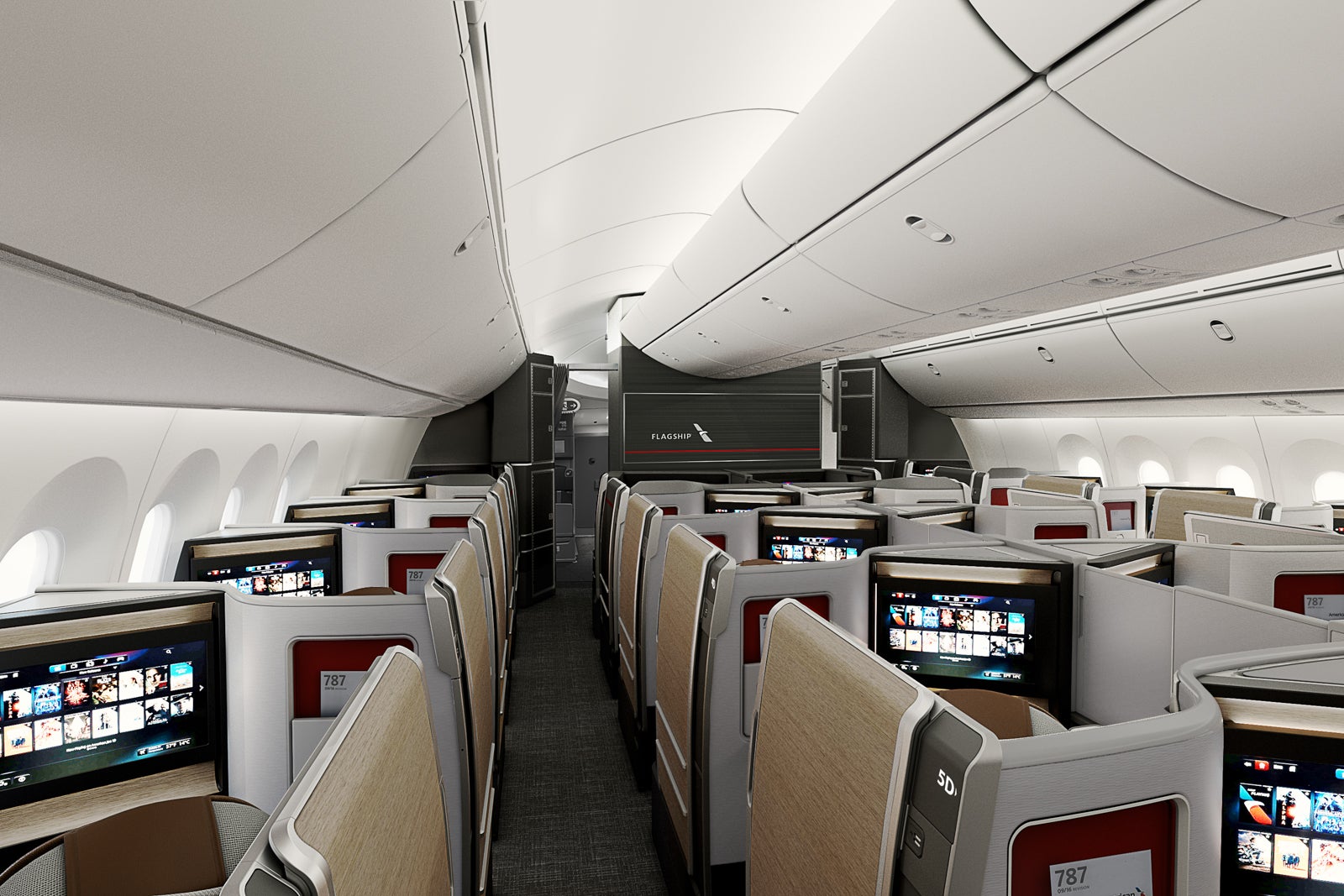 American Airlines is going all-in on the premium experience — with a twist.

The Fort Worth-based carrier on Tuesday unveiled brand-new business-class and premium economy cabins that will debut in 2024 on newly delivered Boeing 787 Dreamliner and Airbus A321XLR aircraft.

The airline will also retrofit two of its most premium planes with new products, though it will come at the expense of first class on planes that currently also have business class.

There's lots to unpack about the announcement, so read on for more details.

Headlining the news is the introduction of a brand-new business-class product for American. The carrier is installing private suites in the forward cabin on all new 787-9 Dreamliners beginning in 2024.

These so-called Flagship Suites will be arranged in a 1-2-1 configuration and feature direct aisle access for each passenger. Additionally, each seat will feature a privacy door, a lounge seating option and expanded personal space. It appears that there will be a privacy divider between the center seats, too.

American's new seat is custom designed for the carrier and is based on the standard reverse herringbone design. All seats face away from the aisle for additional privacy and personal space.

This move is a long time coming for American. There's been a long-standing rumor that the airline would install private suites in business class on its newest Dreamliners, and now it's officially confirmed.

In fact, back in April, news leaked that American would be outfitting its newest Dreamliners in a premium-heavy configuration with all-new seats. Dubbed the "787-9P," these new jets will feature 51 business-class pods, 32 premium economy recliners, 18 extra-legroom coach seats and 143 standard economy ones.

American's existing 787-9s feature 30 business pods and 21 premium economy recliners, so the new jets will skew significantly more premium. It wasn't immediately clear if American plans to retrofit its existing Dreamliners with the new product; we'll update the story when we learn more.

Airbus A321XLR gets a new seat, too

In addition to the wide-body Dreamliner, American's narrow-body fleet is also getting an upgrade.

When the carrier debuts the Airbus A321XLR in 2024, this single-aisle jet will feature an all-new business-class product for the carrier.

These seats will also feature sliding privacy doors, larger storage areas and HD personal televisions. Unlike the new long-haul business-class suite, these seats will face toward the aisle in a herringbone configuration.

American plans to deploy these jets on transatlantic flights that might not have enough demand for larger wide-body jets, and it's likely that these planes will also be deployed on premium transcontinental flights — more on that below.

Premium economy gets an upgrade

While the most noticeable changes will be in business class, American is also introducing a new premium economy recliner on the new 787-9 and A321XLR fleet.

With new privacy wings and additional storage areas, these seats will likely be popular among those looking to upgrade the travel experience without splurging for a business-class seat. Based on the renderings, it doesn't appear that these seats will feature a footrest.

These seats look quite similar to Delta's new custom-designed domestic first-class recliners that debuted earlier this year aboard the Airbus A321neo.

Notably, this will be the first time that an American narrow-body aircraft features premium economy. However, given the airline's deployment plan for the jet — on long and thin transatlantic routes — it makes sense for the carrier to add this popular cabin.

Along with the new cabins, American is officially retiring its Flagship First cabin.

That's because beginning in late 2024, the airline will retrofit its existing fleet of jets that feature these exclusive seats: the Boeing 777-300ER and Airbus A321T.

Historically, the Airbus A321T has been one of the most premium aircraft in the U.S., as the carrier has exclusively deployed it on premium transcontinental routes from New York and Boston to Los Angeles and San Francisco.

This A321 subfleet currently features 10 Flagship First pods, 20 Flagship Business lie-flat and 72 economy seats, half of which are in an extra-legroom configuration.

Going forward, American will align the 16 A321Ts with the rest of the A321 fleet, though the carrier promises that it'll continue to offer lie-flat seats on its premium transcontinental routes departing New York and Boston.

After the retrofit, they'll feature a whopping 70 Flagship business-class suites and 44 Premium Economy seats — but no Flagship First pods.

It wasn't immediately clear what American would do with its in-airport Flagship First dining facilities, which currently offer the airline's most premium flyers a restaurant-style pre-departure dining experience.

Perhaps the airline will keep these outposts open and sell access at an additional cost — a move that the airline began experimenting with earlier this year.

Though the big storyline is that American is investing in the premium experience, it's worth noting that the airline will still suffer from lots of product inconsistency.

While the newly delivered Dreamliners, 777-300s and A321XLRs will feature new seats, the carrier hasn't announced plans to update its remaining widebodies.

That means the existing 787-8 and -9 Dreamliners, along with the 777-200s, will continue to feature a different product. Even worse, the airline will still fly its far inferior Safran Concept D, zig-zag-style business-class seats that alternate between forward- and rear-facing.

Of course, the airline could decide to retrofit more of its existing planes, but only time will tell whether the carrier decides to do so.

Meanwhile, the clock is ticking until American puts its newest seats into service, beginning with its newly delivered jets in 2024.

Featured image by AMERICAN AIRLINES
Editorial disclaimer: Opinions expressed here are the author’s alone, not those of any bank, credit card issuer, airline or hotel chain, and have not been reviewed, approved or otherwise endorsed by any of these entities.