What it's like flying on Air France’s latest jet, the Airbus A220 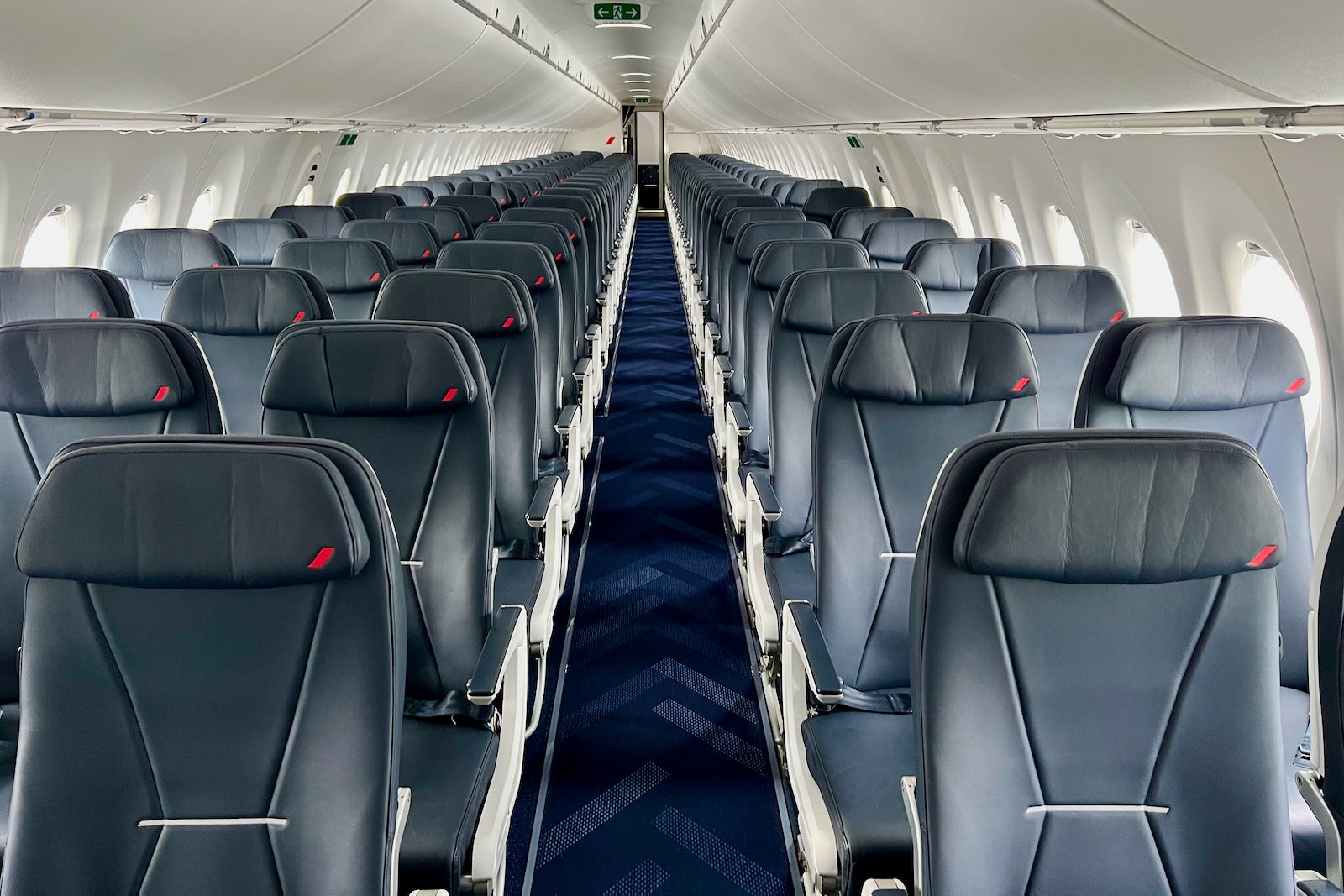 In recent years, the Airbus A220 has quickly become a win-win, both for passengers and for airlines.

It’s no surprise, then, that airlines are introducing the A220 into their fleets to replace aging narrow-body aircraft.

Air France has a firm order for 60 A220s total, with options to add 60 more in the future. Before long, the majority of Air France’s short- and medium-haul network will be operated by the A220, as it also phases out older Airbus A318 and A319 jets.

Since the first Air France A220 flight on Oct. 31, 2021, I’ve been eager to check out the jet. I finally had the opportunity on a recent flight from Paris (CDG) to Bologna, Italy (BLQ) — and I was impressed by the experience.

From the moment I stepped on board the 4-month-old A220 (registered F-HZUC), I could tell that there was a lot to love.

To start, the aircraft’s 2-3 seat configuration means that there’s one fewer middle seat in each row, compared to the 3-3 arrangement on the A318s and A319s that the airline will eventually phase out.

The seats themselves, manufactured by Collins Aerospace, are also quite comfortable. The leather padding was noticeably better than what you’d typically find on a short-haul European route.

Measuring 20 inches wide, these are also some of the widest seats in the narrow-body market (and nearly 1 1/2 inches wider than you'll find on JetBlue's version of the jet.)

Plus, the adjustable headrest wings into a U-shaped formation, providing additional neck support if you’re trying to catch some shut-eye.

Ultimately, Air France flyers will appreciate that the airline didn’t install slimline seats on this plane, like Swiss did on its A220s.

Plus, the blue aisle carpeting is patterned in an ornamental herringbone motif, which adds another stylish touch to the cabin.

Add in Air France’s signature red accents on the forward and rear galley walls, and you’ve got one fine-looking cabin.

Though the carrier sells a business-class fare for its European routes, the only real difference in terms of the hard product is that those sitting in the pointy end of the plane will have the adjacent seat blocked for additional space, meaning those on the two-seat side of the cabin won't have anyone next to them (the aisle seats are blocked) and the middle place on the three-seat side remains empty.

Interestingly, Air France’s A220 sports the densest configuration of any A220 I’ve flown so far. Of the all-coach configurations, Swiss comes closest with 145 seats.

Those additional eight seats on Air France's A220 come at the expense of seat pitch. The standard coach seats offer 30 inches of pitch, while the exit row (Row 14) has 37 inches, and the bulkhead row (Row 1) has 42 inches. The middle armrests measure just 2 inches wide, which doesn’t provide much separation between neighbors.

So although the seats themselves are comfortable, Air France’s A220 definitely feels a bit tighter than the ones flying around the U.S.

If your flight is full, it could make sense to upgrade to an exit row, especially if you’re tall.

While I typically choose the window seat for the views, be aware that there’s limited storage under these seats due to the electrical box jutting out from the support beams.

You’ll also find a coat hook built into the side of each seat.

Each seat offers 118 degrees of recline, which feels quite generous, especially compared to the U.S. airlines.

The tray table slides on its track and measures 17 inches wide and 9 inches long, which comfortably fits a 13-inch MacBook Pro.

There's plenty of storage for your smaller loose items, too. You'll find two mesh pouches and a larger pocket behind each seat.

There’s also a literature compartment at the top of each seat where you’d typically find an inflight entertainment system on other carriers.

All in all, the Air France A220 offers a comfortable and stylish ride on which to crisscross Europe. The one downside is that the standard seat pitch is tight, though that hopefully won’t be a dealbreaker since Air France's current A220 routes are all under two hours.

If you’re looking to stay connected, Air France has you covered.

Each of its A220s is outfitted with a satellite radome for internet access. There’s a complimentary messaging plan, along with a Surf package and a Stream package available for purchase for 5 euros ($5.71) and 15 euros ($17.14), respectively.

The streaming package delivered download speeds of 10 Mbps and upload speeds of about 2 Mbps, which was strong enough to multitask between Outlook and Slack.

While you can stay connected on Air France’s A220, you’ll want to pack your own entertainment — there aren’t any seatback monitors or streaming movies or TV shows on this jet.

Air France installed tablet stands instead of entertainment screens, a move popularized in the U.S. by American Airlines.

While there aren’t any power outlets on the A220, there are two USB ports at each seat: one standard USB-A port, as well as a fast-charging 60-watt USB-C port, which is capable of powering most laptops and larger electronics (assuming that you packed the right cables).

Personally, my 13-inch MacBook Pro had no problem charging using the USB-C port.

While Air France customized its cabin layout and finishes, some aspects of the A220 onboard experience are standardized across all carriers.

These include the oversized windows and overhead bins that’ve proven to be a hit with travelers.

Windows measuring 11 inches wide and 16 inches tall provide ample apertures through which to gaze at the clouds and surroundings — one of my favorite activities when flying over the Alps.

I really could stare all day at the winglets painted with the airline’s famous winged seahorse.

Another nifty feature of the A220 is that no row is missing windows.

The A220’s passenger service units are outfitted with personal reading lights and individual air nozzles, a noteworthy move considering that many European carriers opt to not install personal air vents.

Air France’s A220 features three lavatories, one at the pointy end of the plane that’s reserved for business-class passengers, and two in the rear galley that are considerably tighter.

Unlike Delta (and some other A220 operators), Air France didn’t install windows in the plane’s lavatories.

Finally, every time I fly on an A220, I’m always impressed by how much quieter the plane is compared to older jets. My flight on Air France's A220 was no exception — and it’s a noticeable difference for frequent flyers.

Air France recently became the newest operator of the Airbus A220 — and the flyer-friendly jet looks great both on the outside and the inside.

The sharp livery gives way to a stylish cabin, outfitted with comfortable leather-padded seats in a 2-3 configuration, meaning that there’s one less middle seat per row than the plane it replaces.

While the airline’s seating configuration is a bit tighter than some of its competitors, travelers will appreciate the modernized features, such as larger windows and overhead bins.

Combined with fast Wi-Fi and other enhancements, the A220 ushers in a new — and exciting — era for Air France’s short-haul operations.

Related stories
Chasing elite status on Alaska Airlines? A flight to California this fall could help
Flights to Auckland starting under $700 round-trip
The ultimate guide to earning elite status with United cards
American Airlines forgot it had landing slots at JFK. Then it lost some of them
Featured image by (Photo by Zach Griff/The Points Guy)
Editorial disclaimer: Opinions expressed here are the author’s alone, not those of any bank, credit card issuer, airline or hotel chain, and have not been reviewed, approved or otherwise endorsed by any of these entities.