From theaters to 35,000 feet: How American Airlines chooses and loads inflight entertainment 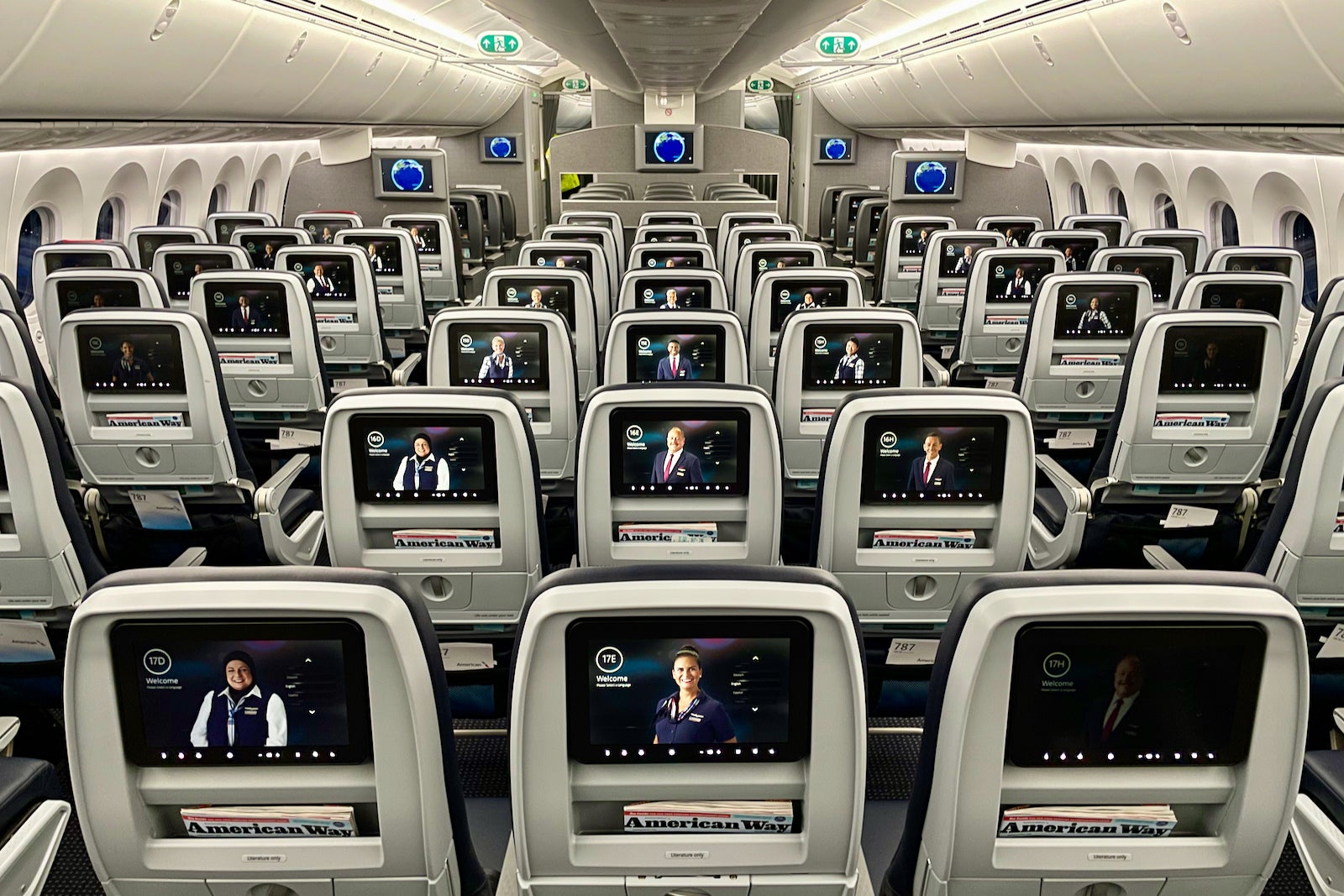 To honor and celebrate the occasion, American Airlines is featuring 20 female-driven movies on its inflight entertainment portal, including hits such as "Hidden Figures" and "Mulan."

With an ever-changing selection of movies and TV shows, who actually chooses what makes it onboard and how is the media loaded on the plane?

We turned to the powers that be to find out. TPG spoke with Jenna Dymond, Chandler Domijan and Sydney English, the trio that's behind American's inflight entertainment team (IFE) to learn more.

At home, choosing what movie or show to watch requires a few clicks on a remote, or perhaps even a string of voice commands. Within seconds, you're streaming the latest flicks without leaving your couch.

But things are very different in the air. The AA IFE team is working with months-long lead times when selecting what movies to show fleet-wide.

Now, in mid-March, American is already previewing movie screeners for June. Inflight content gets updated on the first of each month, so the picks need to be made well in advance.

But, how is American's mighty team of three supposed to screen every movie under the sun?

That's where Spafax, an external content consultant, comes in. Spafax does a major pre-screen before submitting a selection of five to 15 new releases and documentaries from major studios for American's consideration.

Then, it's time to enter the "war room."

Each month, American's IFE team gathers for an hours-long meeting to review all of Spafax's recommendations.

They'll look at each pick's description, cast and intensity, as well as any ratings that might already be circulating online. Since American can screen movies before they're available via at-home streaming services, the team sometimes decides without any third-party ratings.

The team admitted that it has a pretty good understanding of what flyers enjoy. As for genres, comedies always perform well. So do new releases, since American can show a movie before it's available on Amazon Prime or Hulu.

The team analyzes viewership trends for TV shows, especially those that are trending on major streaming platforms.

Sometimes, though, what's popular right now may not be a hit in the air. In fact, the classics, like "Friends," "Big Bang Theory" and "Modern Family," continue to land in the top five most-watched onboard shows.

And then there are times when movies flop in theatres yet become incredibly popular on the inflight entertainment, which is what happened to the movie "Cats."

Each month the team updates roughly 30% of the IFE content, representing over 200 hours of the total 675 hours of content on each jet.

Related: AA’s website now shows you if your flight will have seatback entertainment

From 'war room' to onboard server

Once the team makes its picks, it's back to Spafax to get the content ready to load on planes.

That process starts with quality testing. After obtaining the raw files from the studios, Spafax encodes the movie and then uploads it to an array of seat-back monitors for quality control.

Every new file is tested to make sure there aren't any glitches. Foreign language subtitles, poster files and other meta-data are also checked before creating a flash drive with the month's new media.

Multiple flash drives are shipped to every American Airlines hub and major outstation. Over the course of the next ten to 15 days, airline mechanics install the new media on planes during overnight downtime.

Despite the two-week loading process, each plane's entertainment software will only begin offering the new content on the first day of the month.

Just remember to bring your own entertainment device when flying with American. Most of the carrier's domestic jets are no longer outfitted with seat-back screens. The carrier has largely moved to personal device streaming options.

What's next for American's inflight entertainment

Selecting and loading IFE content for a fleet of over 800 planes is perhaps much more complex than it seems.

American's team said it's particularly proud of all the exclusive partnerships it's launched in recent years, including expanded relationships with Calm, Austin City Limits and Apple. At this point, AA and Apple have teamed up to offer flyers inflight access to Apple Music, Apple TV+ and Apple Books.

In light of the pandemic, the carrier is working on future partnerships that represent mindfulness and wellbeing while onboard.

Another major initiative for the IFE team is a push for greater diversity and inclusion. The carrier is planning more themed channels to honor upcoming heritage months, like LGBT pride in June. Additionally, with the launch of new flights to Tel Aviv on the horizon, American is working on adding more Hebrew and Israeli-themed content to its IFE.

As for feedback, the IFE team said it's always looking at comments and concerns posted across social media channels. They also read post-flight surveys regarding the entertainment system.

And don't worry if you couldn't find anything exciting to watch — this weeks-long process repeats itself every single month, so there's always something new on the horizon.