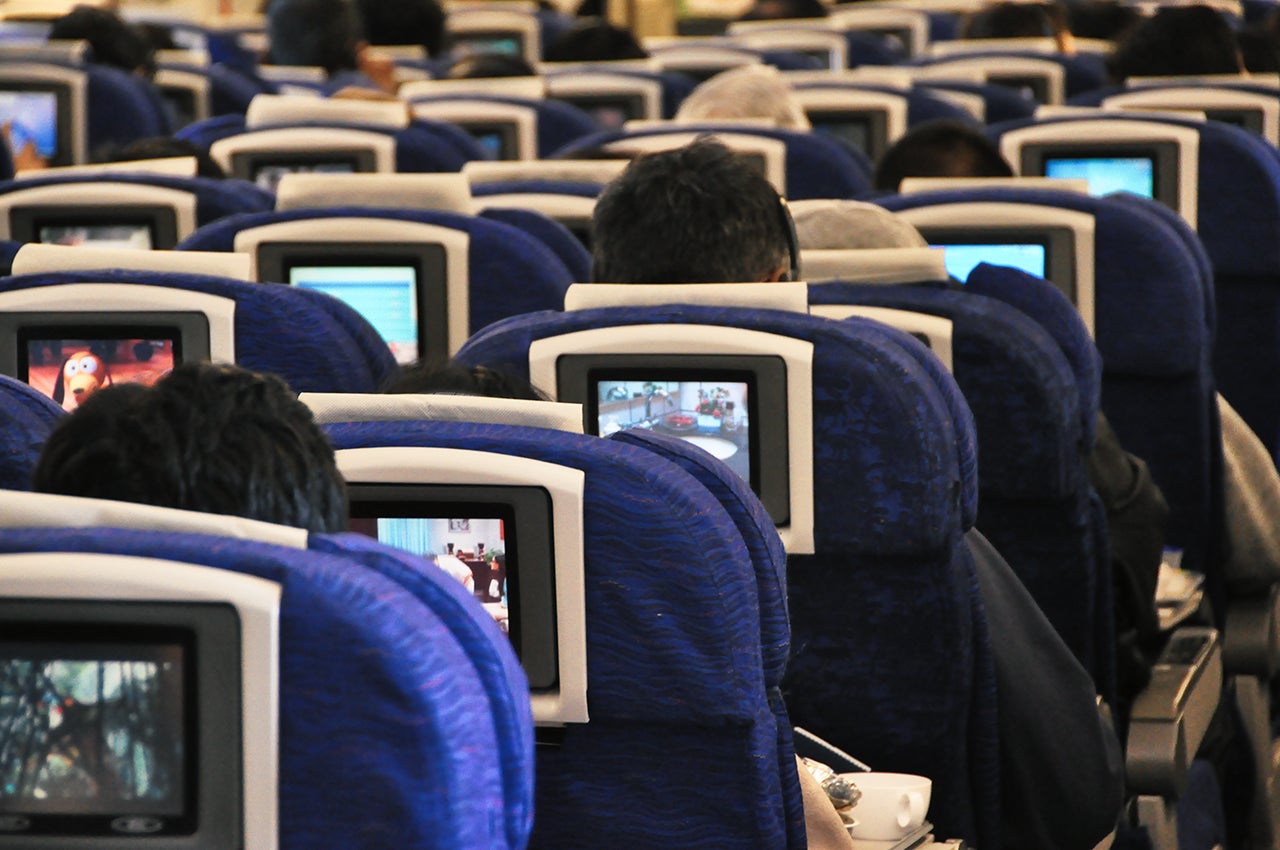 [Bleep!] How airlines censor in-flight entertainment
This post contains references to products from one or more of our advertisers. We may receive compensation when you click on links to those products. Terms apply to the offers listed on this page. For an explanation of our Advertising Policy, visit this page.

Who can forget the thrill, in those daft old pre-digital days, of hearing a flight attendant announce your choice of one movie, and then hearing that little projector drop down from your airplane cabin?

Maybe you forked over a couple bucks for a truly egregious pair of Flintstones-style headphones, imagined you had popcorn — and all was right in the sky. And if your movie was edited not just for length but other, objectionable-to-some things, what could you do? Pout and read the in-flight magazine, maybe, or just sit back and watch.

It was always a given that the in-flight movie was going to be slightly altered from the original. Often, a message to that effect even showed up on the screen, perhaps warning you about the film being edited for format as well as content. With today's ever-expanding range of in-flight entertainment options, from live television to streaming movies and content on demand, you might think the issue of censorship on a plane is, well, a nonissue. And it sort of is — because the airlines that pay companies to screen out content they deem offensive don't really care how you, a member of the captive audience, feels about it.

Yes, in case you didn't know, there's a whole industry that caters to killing time in the sky. In-flight entertainment content providers serve not only as middlemen (and women) between the studios and airlines, but also are charged by the latter to provide what they consider to be the most appropriate and desirable content for their customers.

Jovitah Toh, CEO of Hong Kong-based Encore Inflight Limited, said: "Each airline will provide the distributors with their censorship guidelines and distributors will work with them on the edits — for example, nudity, implicit sex scenes, religious representations, plane crashes, competitor airlines' logos, swear words and images or mention of pigs or pork for Muslim carriers are the general items that are edited."

As a distributor, Toh added, "We offer the airlines the choice of a theatrical/broadcast version or an in-flight edited version.”

Global Eagle calls itself the leading onboard movie, TV, games and music provider for airlines. Mike Miller, the vice president of corporate communications, said, "We dub and edit movies for global audiences, including children on board, and at the same time we are required to obey local laws and local religious sensitivities. That includes for sensitivities across Europe, the Americas, Asia, Middle East and Africa. Each airline has its own requests and we respect our customers’ wishes."

The only real ethical consideration — and it's a biggie — is if and when editorial decisions to respect cultural differences drift into something darker. Alleged case in point: A TPG reader who asked to remain anonymous emailed us to say that, on an Oman Air flight in June 2018, he noticed that the audio blanked out the word "Jew" from a line spoken by a character while watching an episode of "Will & Grace."

We reached out to Oman Air for a confirmation or denial of this alleged incident, and received no comment.

More recently, reports surfaced that airlines have been censoring "Booksmart," a recently-released comedy starring Beanie Feldstein and Kaitlyn Dever. In the film, there's a scene involving some sexual encounters between the two; airlines allegedly not only cut the entire scene, but cut out the words "vagina" and "genitals" from the movie entirely, according to The Washington Post.

Traveler Michaela Barton, who was flying from Melbourne (MEL) to Manchester (MAN) on Etihad with a connection in Abu Dhabi (AUH), tweeted about her disappointment with this censorship. Celebrities, including the movie's director Olivia Wilde, caught wind of the incident.

It wasn't long before similar accounts started pouring in, also calling out Delta.

Wilde was able to view the film on a flight earlier this week, although it's unclear on which airline. A series of tweets show that she is very clearly frustrated and unhappy with how the film has been censored.

At the Academy’s Governors Awards on Sunday night, she told Variety, "I don’t understand it. There’s censorship, airline to airline, of films, which there must be some kind of governing board to determine. We rate it a certain way. If it’s not X-rated, surely it’s acceptable on an airplane."

Following the backlash, Delta says it's going to restore same-sex love scenes on its in-flight version of "Booksmart," as well as "Rocketman," which it had also previously censored out. A spokesperson for the airline told Variety, "Studios often provide videos in two forms: a theatrical, original version and an edited version. We selected the edited version and now realize content well within our guidelines was unnecessarily excluded from both films. We are working to make sure this doesn’t happen again."

And discrimination on board doesn't apply just to the movies, either.

We reached out to MEA's director of public relations, Rima Mikaoui, to ask some questions including the reason the Lebanon-based airline, a SkyTeam member, fails to identify Israel on its route maps, but got no response.

Similarly, Saudia would not field any question about censorship issues, and Kuwait Airways, an airline that discriminates against passengers on the basis of nationality, did not respond by time of publication either.

It isn't only Middle Eastern airlines that get prickly about being pressed on issues of content censorship.

Air India is known for censoring movies, and an official from the airline got cagey when asked by the Times of India why the airline cuts scenes that other airlines allow. A representative for Delta, which infamously showed a censored version of the lesbian love story "Carol" in addition to the more recent addition of "Booksmart" never followed up on censorship-related questions.

The in-flight content distributors are even cagier. Golden Eagle doesn't comment on "contract-specific items." Another company, Aeroplay Entertainment -- with offices in India, the United Arab Emirates and Bahrain -- would not comment for this article.

When pressed on the Oman Air story, Encore's Toh said only this: “I cannot comment on that specific instance as I am not the distributor of 'Will & Grace' — however, I can tell you that such censorship is commonplace in in-flight entertainment."