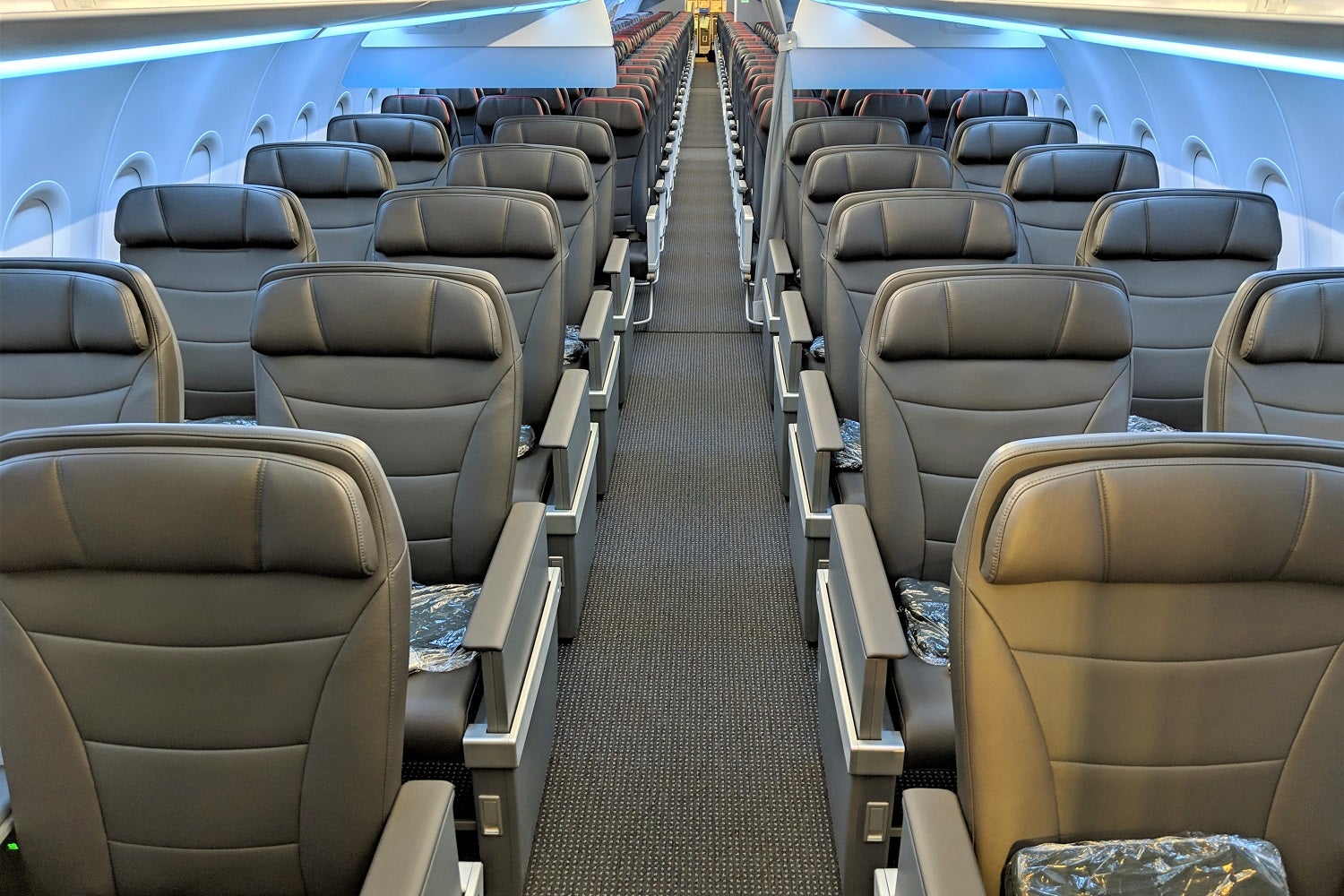 In 2017, American Airlines unveiled plans to shrink pitch in economy to just 29 inches in some rows, and the backlash from customers was enough to prompt the airline to back off those plans. Now, AA is addressing complaints from first-class passengers, saying it will tweak the seating on its panned "Project Oasis" aircraft.

Still, it's going to be months before these improvements are put in place. Even worse, the airline plans to resume retrofitting aircraft with the same issues that first-class flyers are complaining about.

The goal for Project Oasis doesn't sound bad at first. The airline aims to "harmonize" its fleet of 304 Boeing 737-800 aircraft and most of its 219 Airbus A321-200 aircraft by installing the same seating arrangement across the fleet. Once the project is complete, the airline will have an easier time scheduling aircraft and swapping aircraft when there's an operational issue.

The issue that many passengers have is the number of seats at which the airline decided to "harmonize" these aircraft. All of American Airlines' Boeing 737 aircraft would get 12 additional economy seats. In order to accomplish this, AA needed to squeeze pitch in economy to just 30 inches per row and reduce pitch in AA's extra-legroom Main Cabin Extra to just 33 inches. That leaves those extra-legroom seats with less pitch than standard economy seats have on many JetBlue aircraft.

The modifications to the Airbus A321 aircraft would install between 3 and 9 additional seats per aircraft. Legacy American Airlines A321s would be densified from 181 to 190 seats and former US Airways aircraft would go from 187 to 190 seats. While the 737 modifications didn't install additional first-class seats, the A321 retrofits added a fifth row of first-class seats -- increasing the number of first-class seats from 16 to 20. So, although the A321s didn't get as many seats added as on the 737-800, the pitch crunch in economy was similar.

In addition to squeezing pitch, American Airlines also decided to remove in-flight entertainment screens throughout the plane and install personal device holders instead.

In addition, Project Oasis called for AA to install the industry's smallest economy lavatories on mainline jets. Both passengers and flight attendants have complained about the cramped bathrooms that measure just 24 inches from wall to wall. The bathroom's small size requires a sink so small that many passengers have to wash their hands one hand at a time.

There are two positives that came along with to Project Oasis: power outlets are being installed at each seat and larger overhead bins are being added. Both of those improvements are desperately needed on American Airlines' sub-fleet of legacy US Airways A321 aircraft.

On Tuesday afternoon, American Airlines confirmed it will modify the first-class cabins on its Project Oasis aircraft. An airline spokesperson said AA is "adding tablet holders, USB ports and an additional drink holder to first class as well as improving the underseat stowage at those seats."

Instead, the current Project Oasis modifications only add a small retractable shelf that could be folded out from the tray table to prop up your device. In addition to being far below eye level, this location meant that you weren't able to continue watching entertainment on your device when a meal is served or if you're trying to work on a laptop while watching entertainment.

AA is also adding a drink tray to the back of center armrest to give first class passengers more options for storing their drinks. I suspect that this will be similar to what AA currently has in first class on its Boeing 737-800 aircraft.

Last, but certainly not least, American Airlines is fixing the storage space under the first-class seats. Many AA passengers have griped about how the seating supports and seat height make this space too small to store many bags.

While these improvements are appreciated, unfortunately they're going to be made in the first-class cabin. Economy passengers won't see any improvements from the new modifications to Project Oasis.

That means other Project Oasis complaints aren't being addressed. The economy bathrooms will still measure just 24 inches wide, and AA will still lack in-flight entertainment screens -- even in first class.

The quest for densification hasn't been smooth for the American Airlines. Effectively the first Project Oasis aircraft took its first flight in November 2017. That's when AA's first Boeing 737 MAX took flight with 172 seats in the configuration that the 737-800 would then be adapted to match.

In May 2018, the first Project Oasis-retrofit Boeing 737-800 entered service and the airline started churning through modifications on dozens of 737 aircraft. Then in March 2019, AA discovered problems with the retrofit work done on two of its Project Oasis aircraft and grounded 14 retrofit aircraft for inspection and repairs. Days later, AA's 737 MAX fleet was grounded in the wake of the Ethiopian Airlines crash.

In May 2019, the first Project Oasis-retrofit Airbus A321-200 entered service. This aircraft (registration N161UW) would end up being the only A321 retrofit before AA suspended all Project Oasis retrofits later that month.

An American Airlines spokesperson now tells TPG that the "737s and A321s will restart modifications next month," a development that comes after AA has endured a rough summer of cancellations due to the 737 MAX grounding and ongoing disputes with mechanics.

The resumption in retrofits will first start with the current Project Oasis modification -- the same one that first-class passengers have raised issues with.

It's not until spring 2020 that American Airlines will begin retrofitting aircraft with the new Project Oasis modifications. All 71 Boeing 737-800 that have been retrofit with the original version of Project Oasis will go back into the shop for yet another retrofit. In additional, all aircraft that are modified between September and the spring 2020 switch will have to be re-retrofit.